The arc of world war memories

War memorials and faded names on plaques have lost their power to remind us of battlefield realities in the past. We need new ways to make us remember, force us to think.

‘Never forget’, say war memorials everywhere, but we do. These engraved standing stones fade into the background of a city’s architecture over decades and are no longer something that makes us hear the voices, the stories, of those families who were devastated by military attacks and violence.

In the midst of another European war, revisiting the stories of the people whose lives were changed, damaged or wiped out forever in World War I and World War II, has never felt so necessary. This is something that a new border project between Luxembourg, France, Germany and Belgium is working to do. Its intention is to help young people understand the devastation of the world wars of the twentieth century and their human and social consequences. Visiting this region, it’s hard to ignore its unerring relevance to the combat now going on in the wheatfields and towns of Ukraine, and why fading and forgotten memories are a problem.

In this border region, much of it along the River Meuse, the parallels could not be more apparent: people talk of towns that were completely wiped out, hundreds of men forced into conscription for another country, soldiers and civilians living in cellars with little food or water in terrifying conditions.

Unlike many projects of the past, the idea behind Land of Memory is to concentrate on people rather than objects, giving visitors to the area, massively damaged by invasion in World Wars I and II, a chance to unravel stories of families, villages and regions, and understand the long shadow of those wars on the people who survived as well as those who died. It’s about making those old stories come to life for new audiences.

One of the places that does this well is the Schumanns Eck memorial trail that winds through the woods of Luxembourg, near Wiltz, where thousands of people died in the frozen winter war of the Battle of the Ardennes, also known as the Battle of the Bulge, in December and January 1944/5.

Based on more than 500 interviews carried out over 25 years by the trail’s founder Frank Rockenbrod, they have compiled a journey through these pock-marked woods and through the memories of the people who lived and fought here, with life size images of soldiers and civilians. Their stories are told to visitors through QR codes (quick response codes accessible on smartphones) and tour guides. 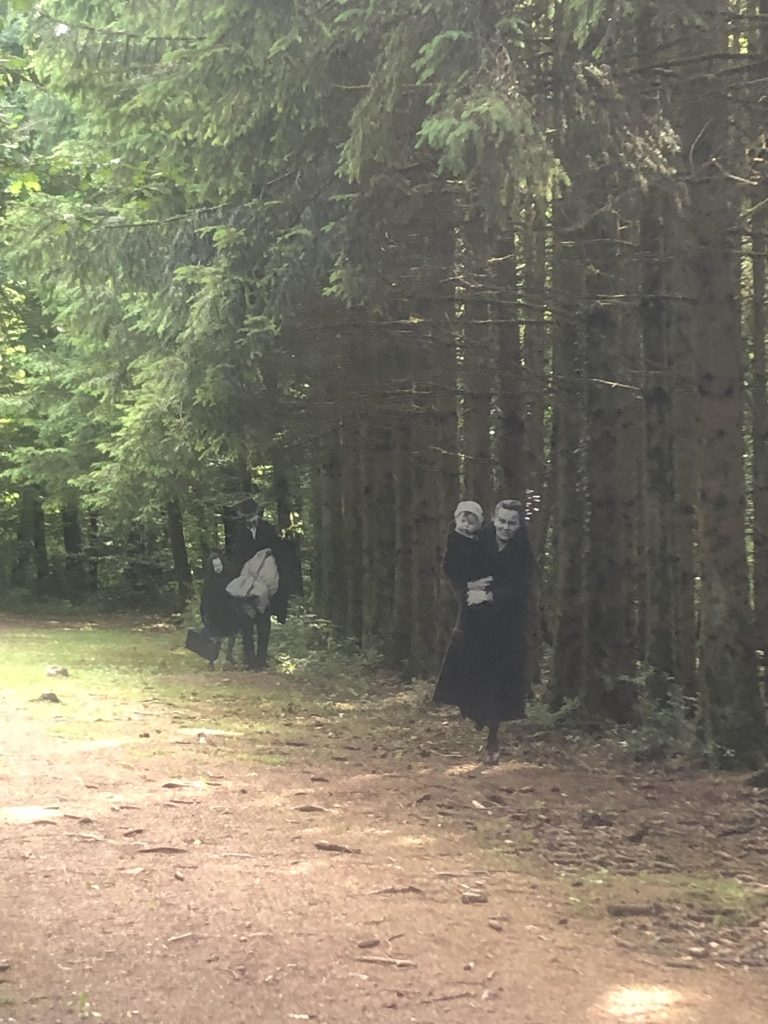 Walking through the woods, seeing the tiny spaces in the ground where soldiers hid for hours and days in the snow, without winter clothing (some had come straight from Normandy), and with little but branches of trees to keep them warm, it makes this history far more real. The dips in the ground, hiding places for men and equipment, remain. We also hear about moments of brave resistance during the Nazi occupation, when the Luxembourg people held a strike against the diktat that demanded they give up their language.

Rockenbrod, whose father was sent to a camp after Luxembourg was invaded by the Nazis, feels passionately about telling the stories of the civilians, as well as the soldiers of all sides, who fought in the frozen foxholes of these woods in December 1944. It’s important to remember our shared human values, he says, as he talks of the around 11,000 Luxembourg men who were either conscripted into the German army or sent to camps, and 3,600 Luxembourger women conscripted to German factories after the Nazis took control of the state. He also interviewed German soldiers and incorporated what happened to them.

In the sub-zero temperatures of December 1944, the citizens of a newly-freed part of Luxembourg, who thought their war was over, found themselves once more under attack from the Nazis and in the middle of an almost hand-to-hand battle in front of their eyes. They lived on a vital crossroads and were caught between two armies. Rockenbrod talks of local people forced from their homes becoming refugees in their own country, walking the lanes, left with nothing, after soldiers destroyed their homes and took away their dog carts carrying their last possessions.

Luxembourg was a neutral state under the Treaty of London (1867) and hoped that the Nazi army would hold to that agreement. It didn’t. It marched right in and demanded a ‘Germanisation’ of the population, forcing them to stop using their own language and to rewrite educational texts.

The idea of national neutrality is once more under a piercing spotlight, as Finland and Sweden seek to join Nato, worried that the idea of neutrality is nothing to Putin and his armies. Luxembourg’s history is one of those that the leaders of Finland and Sweden may be bearing in mind. As Alexander Stubb, the former prime minister of Finland, has said: ‘We live in a world in which everything can be used as an instrument of power. The first, and most self-evident, is military, conventional and non-conventional.’ Luxembourg, like Finland and Sweden, was geographically strategic.

At another stop on this route I walk through the pretty riverside town of La Roche-en-Ardennes, where Gilles Bouillon, director of the Museum of the Battle of Ardennes, points at a house across the street to say that this was the only home in this city-centre street that survived WWII. This devastated town was awarded the Croix de Guerre, a Belgian military award for bravery founded during WWI and re-established in 1940. It had, in effect, given up its life for the war.

Again, all these stories of the past start to feel so similar to the news broadcasts of 2022 from Ukraine. How is it possible that these raw events have started to be repeated so horrifically?

Those who lived through WWI and WWII spoke and wrote of it never happening again, of wars that did not need to be fought. As Olivier Schmitz, governor of the province of Luxembourg in Belgium, said at a recent Land of Memory conference, those people are dying out: ‘There will be no more of them for our young people to meet.’ He felt that it was valuable to remind young people of the history that would ‘help us fight conflict and chaos where false ideas are rife’.

Meanwhile, Pascale Trimbach-Rognan, the préfète of the Meuse region, said at the conference that brought these commentators together at the end of June, that memory was a way of thinking about the past and future: of reflecting on the past. The Meuse region was ravaged by WWI: by the end of that war 70% of its towns and villages were damaged, one third no longer had anyone living in them.

No farewell to trauma

In Verdun, a new virtual reality exhibit deep in the city’s citadel, takes you underground in a railway car where you see a day in the life of a soldier recovering from the battlefield before returning to the war. After donning special headwear, you see it through his eyes, as he and his fellows take refuge in the enormous underground building created to protect the city; its dark passages and thick walls provide them with a few hours of security and rest from the relentless shelling on the fields outside. 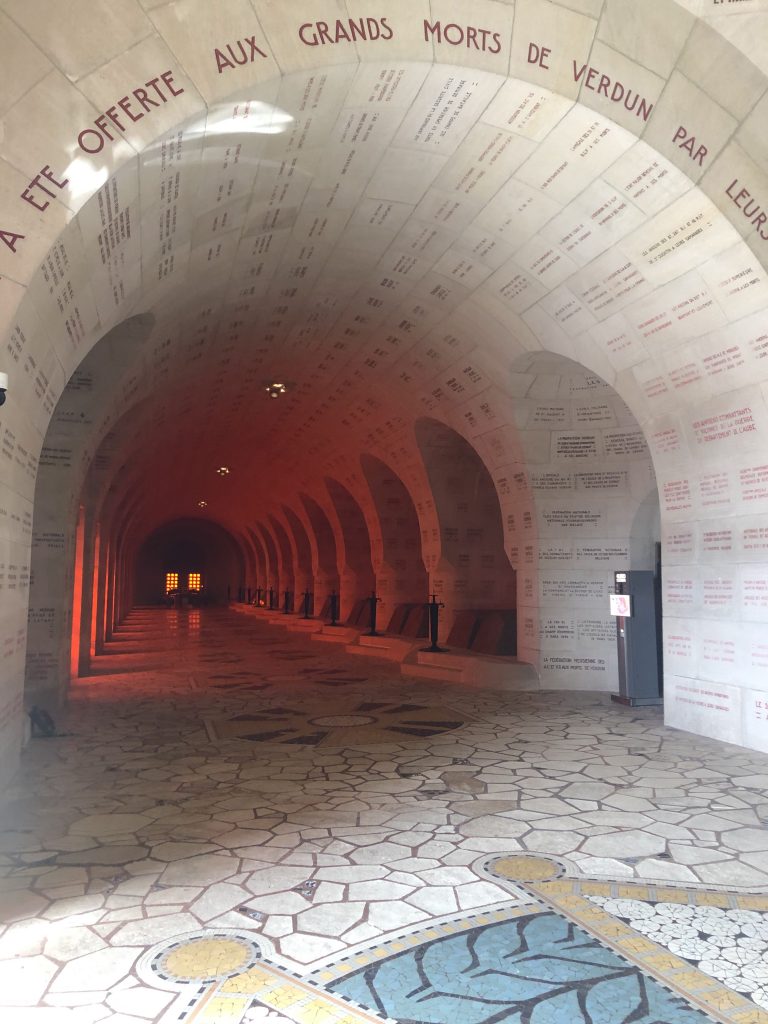 Again, the resonance with soldiers in embattled Ukrainian cities could not echo more clearly. The soldiers we follow via our VR headsets are exhausted, mentally and physically battered, but trying to find some kind of normality at the centre of what would have seemed like an unending battle. Bringing these human stories to life in front of our eyes has so much more power than grey standing stones.

All sorts of memories have faded. Matthieu Billa, author of Ardenne 1944-45 (OREP, 2019), says war is not just about the years of fighting but also about the fate of civilians in the years after the wars, stories that may be forgotten or ignored. It is often perceived that when war is over the situation gets back to normal very quickly. It does not. It’s important to understand that the damage and trauma is still there decades afterwards, he says.

Something that it will be vital to remember in Ukraine is that support will be needed not just during the war but for many years after. As Aristotle said: ‘It is not enough to win a war, it’s more important to organise the peace.’

The use of rape as a weapon of war is not new. The army that terrorizes civilians and targets women today in Ukraine is the same one that has never had to reckon with its own horrific World War II crimes.