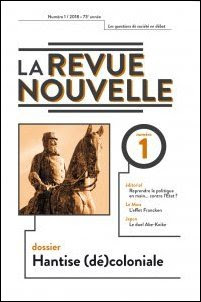 In La Revue nouvelle, Azzedine Hajji discusses the inequalities persisting decades after the end of colonial occupation. He highlights political initiatives designed to tackle Belgium’s Congolese colonial past but argues that ‘we would be wrong to suppose that these initiatives are the result of a “natural” evolution within our society, that is now ineluctably destined to move in a progressive direction.’ Attitudes live on which have their roots in the colonial era: ‘Omitting certain embarrassing elements of the past helps to divert attention from the very current consequences of certain aspects of our presence in Africa.’

Islamic feminism: Islamic feminists assert their right to ‘choose their identity rather than have it imposed on them’, writes Ghaliya Djelloul, ‘and to forge a multiple consciousness, both as women and as Muslims, in the teeth of a variety of oppressive forces’. Rather than denying them the chance to ‘breathe at least a little democracy into the religious sphere’, secular feminists should challenge the traditions behind Muslim women’s oppression. Citing Tunisian philosopher Soumaya Mestiri, Djelloul proposes a ‘feminism of the frontier’, where the key is to ‘take dichotomizing concepts as a starting point, rather than organizing the world into dichotomies’.

Fine words: An operation to remove homeless people from Brussels city centre during a visit by Angela Merkel last year has become a permanent measure. Renaud Maes ponders the contrast between the theme of Merkel’s speech – ‘we must remain human’ – with the political reality. Given ‘the refusal to establish the slightest structure of welcome’, Maes asks ironically whether it might not be better to simply ‘distance ourselves … from humanity’.
More articles from La Revue Nouvelle in Eurozine; La Revue Nouvelle’s website 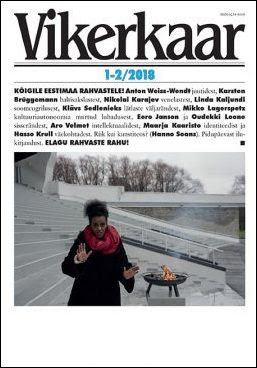 Vikerkaar marks the centenary of the Republic of Estonia by examining its multicultural past and present. Inspired by the country’s Independence Manifesto, entitled ‘To All the Peoples of Estonia’, the issue surveys Estonian history from the perspective of Estonian Jews, Germans, Russians, refugees and economic migrants. What are the origins of the myth of Estonia’s mono-culturalism, and how have past regimes dealt with the country’s multi-ethnic reality?

Cultural autonomy: Sociologist Mikko Lagerspetz argues that the cultural autonomy law of 1925, unique in its time and resurrected in 1993, could ease ethnic tensions in Estonia today. The law gave national minorities ‘non-territorialized autonomy … to preserve, develop and carry forward that minority’s culture’ and was seen as a counter to threats of Balkanization. Alas, ‘most post-communist states have used cultural autonomy laws not to empower minorities, but to curtail more far-reaching demands, such as territorial autonomy’.

Intellectuals: Historian Aro Velmet responds to the recurring lament about the ‘death of the intellectual’ in Estonian society. Taking the example of the Catholic activist Varro Vooglaid, and the free speech activist Kaur Kender, he argues that ‘appealing to a principled truth, holding society to account and creating a new public’ still hold the potential to generate debate. Public intellectuals in Estonia today may be ‘marginalized’, but they are also ‘far too likely to be Estonian, white and male’.

Estonian Russians: The contradictions between the nationalist and the universalist values in the Estonian constitution are ‘holding Estonian Russians hostage’, writes journalist Nikolai Karayev. ‘The glass ceiling has not disappeared. On average, Russians earn less than Estonians and the proportion of Russian speakers in the public service and in leadership positions generally is much lower. The official explanation is lower levels of education; the nationalism that dominates everyday life tends to be ignored.’

Glänta serves as ‘another place’ for people who ‘share alliances’ on the subject of personal identity. Ten writers have contributed to this argumentative, thoughtful collection of essays and narrative poems, all critical of a society that celebrates secularism and capitalism, as well as ‘maleness’ and ‘whiteness’.

Johannes Anyuru, one of Sweden’s leading writers, speculates on his own otherness as a black Muslim: ‘Islam will always be its own world, with skies, seas and horizons of its own and, above all: with its own narratives that tell us what skies, seas and horizons are.’ Anyuru calls his essay ‘Alhambra’, describing a visit to the palace but widening the discussion to the philosophy and culture it represents: ‘[Islam], that battered fortress rising out of the desert of globalization.’ His essay includes his wife Sara Nelson’s letters to her dead mother and fragments of her search for an identity as a Muslim woman: ‘I am not another’s tolerance. I’m not an image in another’s collection […] I am a collective.’

Discriminate more? By excluding non-human components of planet Earth, we contribute to its ruination, argues Anders Johansson. More discrimination might be the answer: ‘there are theoretical reasons for breaking down [humanity] into the smallest possible units […] so that each one of us can stand accused of his or her actions.’

Exclusion: Agri Ismaïl prefers to make legalistic points to hammer home the ways used by ‘whites’ to exclude outsiders. He tells about straightforward abuse but also discusses, for instance, Kodak colour film (once coded for paleness), what percentage of non-Europeans in an area triggers an exodus of white Swedes – it is 4% – and the guidelines for identifying ‘unwanted types of person’ documented in the archives of the Swedish Migration Authority.
More articles from Glänta in Eurozine; Glänta‘s website 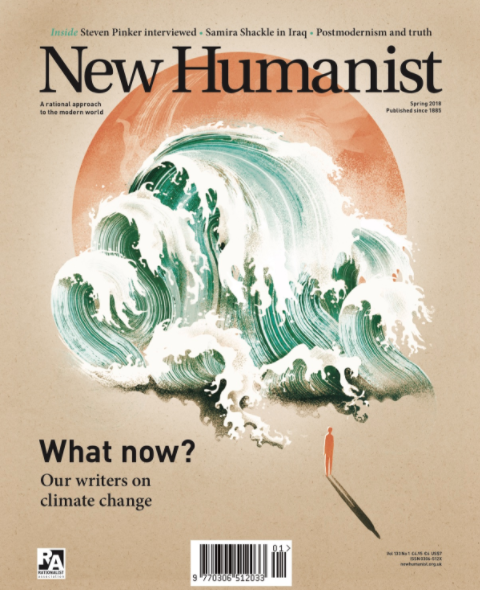 ‘Faced with overwhelming empirical evidence that human activity is causing profound and life-threatening changes to the planet, our response is often… well, what? Panic? Denial? Paralysis?’ asks Daniel Trilling in his editorial to this issue of New Humanist, which tackles the climate change challenge from several angles.

Will McCallum, a Greenpeace activist, ponders what is ‘rational’ when responding to climate change. ‘We continue to tell ourselves – via a mass media often unable to deal with nuance – that technology will fix things,’ he writes. But some things are beyond rescuing and it’s time for a more frank discussion, in particular: ‘How to judge what is ecologically valuable or culturally significant enough to preserve?’ McCallum highlights some desperate – and possibly doomed – efforts to save individual species. ‘Do we throw everything we can at saving the Scottish crossbill because it has the word Scottish in its name?’

Then there are the political aspects of the problem. According to Sam Geall, ‘global warming is not a straightforward, singular problem, but – like poverty, or inequality – irresolvable by simple, technocratic fixes. It requires multiple approaches and political participation, even struggle.’ All the more reason, then, to be concerned about a growing trend in authoritarian populist regimes: ‘Rights to land and natural resources are granted to industry and private corporations. When communities oppose these grabs, they are stigmatized – as anti-development, agents of foreign influence, or terrorists – and face not only threats and violence, but legal persecution.’

Literature and landscape: Whether as heritage or as kitsch, landscape is often thought of as being detached from everyday life. In literature, too, human history tends to be separated from geography. Writing from and about the Balkans reminds us of this intimate connection, arguespoet Fiona Sampson. 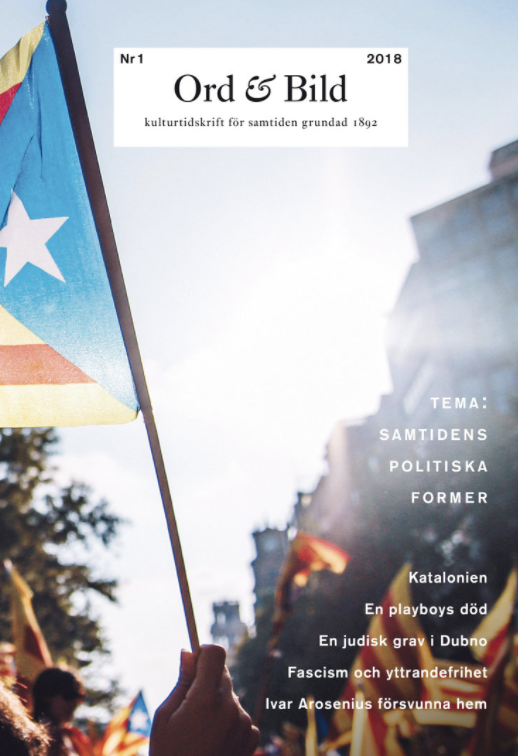 In Ord&Bild, Lena Berggren reflects on the decision of the book fair in Gothenburg to disinvite the far-right magazine Nya Tider. Freedom of speech has never been and never will be absolute, she argues. In Sweden, all print media can apply for state support; Nya Tider itself receives a generous grant. As long as far-right publications are not only allowed to be published but also funded by the state, writes Berggren, this is not a matter of freedom of speech or press, but of drawing the line and preventing the far-Right crowding out others.

Catalonia: Historian of ideas Karolina Enquist Källgren asks why democracy today seems increasingly hard to defend using established principles. Engaging with the writings of Hanna Arendt and Claude Lefort, she finds answers in the Catalan independence struggle. The events of last autumn ‘emanated from a clash between political subjects created through emotional identification with a nation and the sovereignty of the institutions that in Spain and Catalonia constitutes the political’.

Beyond the grave: Hugh Hefner died just before the #MeToo debate took off, but his purchase of the burial plot next to Marilyn Monroe’s was seen as ‘a symbolic assault, reaching into the realm of death’. Klara Arnberg and Mariah Larsson follow Hefner’s life as a shaper and exploiter of sexuality, consumption and identity in the second half of the twentieth century. Anna Grinzweig, meanwhile, goes looking for the grave of her Jewish grandparents in the Ukrainian town of Dubno. They were unusual not just because they survived the Holocaust, but also because they stayed in the town after the war. 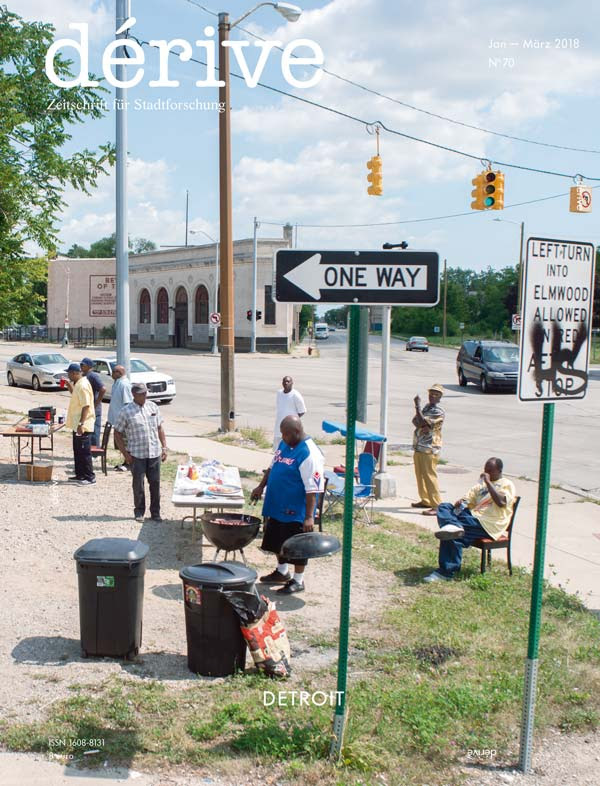 These are developed by Joshua Akers in a brief history of the city’s decline. White flight and racist housing policy after WWII created the social tensions responsible for the riots of 1967 – tensions that increased from the 1970s with de-industrialization, globalization and progressive suburbanization. Financialization and the politics of austerity underway since the start of this century have continued to impact at a primarily racial level.

‘The remaking and reconfiguration of property markets in the aftermath of the financial crisis brought forward old practices of expropriation and exploitation in new forms,’ writes Akers. Detroit’s contemporary development, he writes, is better characterized as a ‘retrenchment of wealth in the least tattered areas of the city. The process is twinned with the ongoing displacement of black residents and the use of demolition to buffer and divide these developments from continuing decline.’

Art: An interview with the photographer Camilo José Vergara on his visual record of the city going back twenty-five years: ‘I wanted to say the same about Detroit as an art historian would say about 16th and 17th century Florence’; and sculptor Scott Hocking on night-walking through Detroit and avoiding the city’s strays.

Dear reader: The Eurozine Review will now be appearing bi-weekly, in order to provide you with a wider and more frequent and sample of content from Eurozine’s partner magazines across Europe. Subscribe here.