Multiculturalist advocacy of collective rights has opened the door in some western nations for religious law to take precedence over civil law, argues Kenan Malik. Partly responsible is the idea that human beings are bearers of a particular culture as opposed to social and hence transformative beings.

One of the biggest complaints about globalisation is that as market forces sweep across the world, so does Western culture. In the end, many fret, whether you are in New York, Rome, Beijing or Mumbai you will buy the same pair of jeans in the same shopping mall, drink the same overpriced latte in the same coffee shop, and watch the same dreary Hollywood blockbuster. Local culture will be no more.

But the greatest Western cultural export is not Disney or Starbucks or Tom Cruise. It is the very idea of local culture. A notion that originated in late-eighteenth century Europe, in the Romantic backlash against the Enlightenment, today has the whole world in its grip. Every island in the Pacific, every tribe in the Amazon, has its own culture that it wants to defend against the depredation of Western cultural imperialism. You do not even have to be human to possess a culture. Primatologists tell us that different groups of chimpanzees each have their own culture. No doubt some chimp will soon complain that its traditions are disappearing under the steamroller of human cultural imperialism.

We’re All Multiculturalists Now observed the American academic, and former critic of pluralism, Nathan Glazer. And indeed we are. The celebration of difference, respect for pluralism, avowal of identity politics – these have come to be regarded as the hallmarks of a progressive, anti-racist outlook and as the foundation of modern liberal democracies.

At the heart of most multicultural philosophies is the belief that an individual’s cultural background frames their identity and helps define who they are. If we want to treat individuals with dignity and respect we must also treat with dignity and respect the groups that furnish them with their sense of personal being. We cannot, in other words, treat individuals equally unless groups are also treated equally. And since, in the words of the American theorist Iris Young, “groups cannot be socially equal unless their specific experience, culture and social contributions are publicly affirmed and recognised”, society must protect and nurture cultures, ensure their flourishing and indeed their survival.

One expression of such equal treatment is the growing tendency in some Western nations for religious law – such as the Jewish halakha and the Islamic sharia – to take precedence over national secular law in civil, and occasionally criminal, cases. Another expression can be found in Australia, where the courts increasingly accept that Aborigines should have the right to be treated according to their own customs rather than be judged by “whitefella law”. According to Colin McDonald, a Darwin barrister and expert in customary law, “human rights are essentially a creation of the last hundred years. These people have been carrying out their law for thousands of years.” Some multiculturalists go further, requiring the state to ensure the survival of cultures not just in the present but in perpetuity. The philosopher Charles Taylor suggests that the Canadian and Québec governments should take steps to ensure the survival of the French language in Québec “through indefinite future generations”. 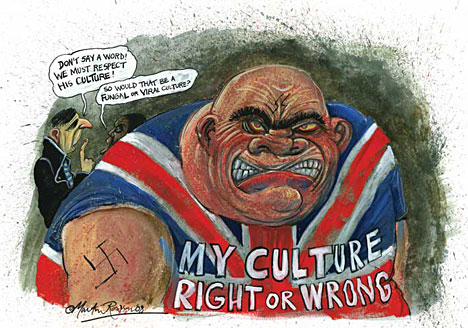 The demand that because a cultural practice has existed for a long time, it should be preserved is a modern version of the naturalistic fallacy – the belief that “ought” derives from “is”. For nineteenth-century social Darwinists, morality – how we ought to behave – derived from the facts of nature – how humans are. This became an argument to justify capitalist exploitation, colonial oppression, racial savagery and even genocide. Today, virtually everyone recognises the falsity of this argument. Yet, when talking of culture rather than of nature, many multiculturalists continue to insist that “is” defines “ought”.

Part of the problem here is a constant slippage in multiculturalism talk between the idea of humans as culture-bearing creatures and the idea that humans have to bear a particular culture. Clearly no human can live outside of culture. But then no human does.

To say that no human can live outside of culture, however, is not to say they have to live inside a particular one. To view humans as culture-bearing is to view them as social beings, and hence as transformative beings. It suggests that humans have the capacity for change, for progress and for the creation of universal moral and political forms through reason and dialogue.

To view humans as having to bear specific cultures is, on the contrary, to deny such a capacity for transformation. It implies that every human being is so shaped by a particular culture that to change or undermine that culture would be to undermine the very dignity of that individual. The biological fact of Jewish or Bangladeshi ancestry, it suggests, somehow make a human being incapable of living well except as a participant of Jewish or Bangladeshi culture. This would only make sense if Jews or Bangladeshis were biologically distinct – in other words if cultural identity was really about racial difference.

The relationship between cultural identity and racial difference becomes even clearer if we look at the argument that cultures must be protected and preserved. The political philosopher Will Kymlicka argues that since cultures are essential to people’s lives, where “the survival of a culture is not guaranteed, and, where it is threatened with debasement or decay, we must act to protect it.” For Charles Taylor, once “we’re concerned with identity”, nothing “is more legitimate than one’s aspiration that it is never lost.”

But what does it mean for a culture to decay? Or for an identity to be lost? Kymlicka draws a distinction between the “existence of a culture” and “its ‘character’ at any given moment”. The character of culture can change but such changes are only acceptable if the existence of that culture is not threatened. But how can a culture exist if that existence is not embodied in its character? By “character” Kymlicka seems to mean the actuality of a culture: what people do, how they live their lives, the rules and regulations and institutions that frame their existence. So, in making the distinction between character and existence, Kymlicka seems to be suggesting that Jewish, Navajo or French culture is not defined by what Jewish, Navajo or French people are actually doing. For if Jewish culture is simply that which Jewish people do or French culture is simply that which French people do, then cultures could never decay or perish – they would always exist in the activities of people.

If a culture is not defined by what its members are doing, what does define it? The only answer can be that it is defined by what its members should be doing. And what you should be doing, for cultural preservationists, is what your ancestors were doing. Culture here has become defined by biological descent. And biological descent is a polite way of saying “race”. As the American writer Walter Benn Michaels puts it, “in order for a culture to be lost … it must be separable from one’s actual behaviour, and in order for it to be separable from one’s actual behaviour it must be anchorable in race.”

The logic of the preservationist arguments is that every culture has a pristine form, its original state. It decays when it is not longer in that form. There are echoes here of the concept of “type” that was at the heart of nineteenth-century racial science. For all the talk about culture as fluid and changing, multiculturalism, no less than old-fashioned racism, invariably leads people to think of human groups in fixed terms. Both sides of the race debate have their own dialect of difference. The right has appropriated the language of diversity to promote its message of racial exclusion. Liberals often turn to the idiom of exclusion to articulate a pluralist idea of culture.

“Every society, every nation is unique,” claimed Enoch Powell, the most vocal opponent of black immigration in postwar Britain. “It has its own past, its own story, its own memories, its own languages or ways of speaking, its own – dare I use the word – culture.” This is why, he argued, immigrants, who belong to different cultures and different traditions, could never be fully British. In France the far right has astutely exploited the idea of cultural differences to promote its anti-Muslim message. “It is a tragic mistake to want to have communities representing different civilisations live together in the same country,” argued former Gaullist minister Michel Poniatowski. “I love North Africans,” Jean-Marie Le Pen has declared, “but their place is in the Maghreb”. Through the language of diversity, racism has been transformed into just another cultural identity.

If the right has embraced the grammar of diversity, liberals have adopted the idiom of racial identity. Will Kymlicka is anything but a xenophobe. Yet his pluralism leads him to adopt the language of exclusion. “It is right and proper,” Kymlicka believes, “that the character of a culture changes as a result of the choices of its members.” But, he goes on, “while it is one thing to learn from the larger world,” it is quite another “to be swamped by it”. What could this mean? That a culture has the right to keep out members of another culture? That a culture has the right to prevent its members from speaking another language, singing non-native songs or reading non-native books?

Kymlicka’s warning about “swamping” should make us sit up and take notice. The right has long exploited fears of cultural swamping to promote the idea that Western nations should pull up the drawbridge against immigrants whose cultural difference makes them unsuitable. It is an argument that Kymlicka undoubtedly abhors. Yet once it becomes a matter of political principle that cultures should not be swamped by outsiders, then it is difficult to know how one could possibly resist such anti-immigration arguments.

Historically, anti-racists challenged both the practice of racism and the process of racialisation; that is, both the practice of discriminating against people by virtue of their race and the insistence that an individual can be defined by the group to which he or she belongs. Today’s multiculturalists argue that to fight racism one must celebrate group identity. The consequence has been the resurrection of racial ideas and imprisonment of people within their cultural identities. Racial theorists and multiculturalists, the French philosopher Alain Finkielkraut observes, have “conflicting credos but the same vision of the world”. Both fetishise difference. Both seek to “confine individuals to their group of origin”. Both undermine “any possibility of natural or cultural community among peoples”. Challenging such a politics of difference has become as important today as challenging racism.

The corona pandemic has brought globalization’s defects into sharp relief. Across the spectrum, neoliberalism is being challenged. Can the narrative of beneficent globalization be revived? And as US hegemony fades, can the institutions of global governance survive?

There is nothing ‘natural’ about the coronavirus pandemic: global capitalism has created it. Containment measures of social distancing bear the characteristics of a general strike. It can serve as an experiment taking back control over our own time, Bram Ieven and Jan Overwijk argue.