‘Forced migrants’ in name and classification

Can refugee scholars hold the line?

Those forced to flee from conflict, persecution, violence or human rights violations need protection; recognition of their plight is an ongoing struggle. And the causes of forced migration are growing. What now defines ‘survival’ – that all important refugee watchword – may indeed need reconsideration. 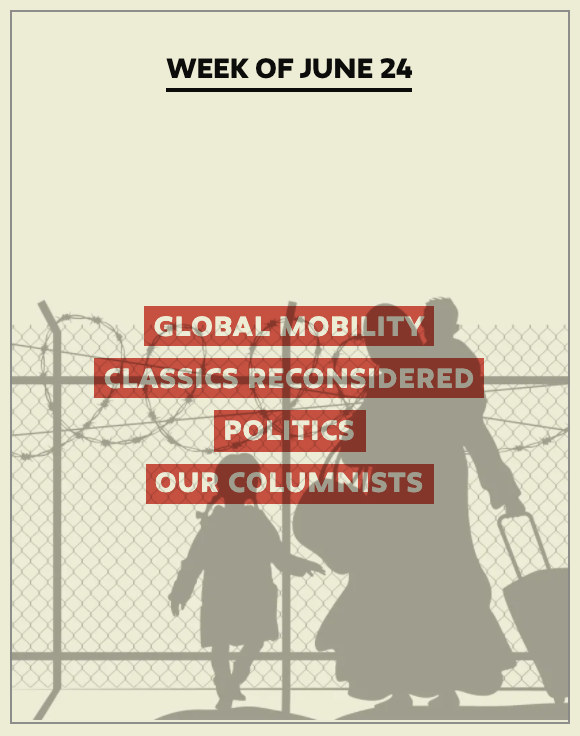 This article first appeared in Public Seminar on the week of 24 June 2021.

My title doesn’t refer to whether refugee scholars should help others fend off attacks from governments and populist parties that are intent on destroying the international protection regimes we study. Most of us are already so engaged.

Rather, I am asking a conceptual question about the nature of refugee scholarship: does the line that separates forced migrants from other persons on the move continue to be theoretically sustainable?

Most (but not all) refugee scholars argue for such a distinction, both on conceptual and practical grounds. 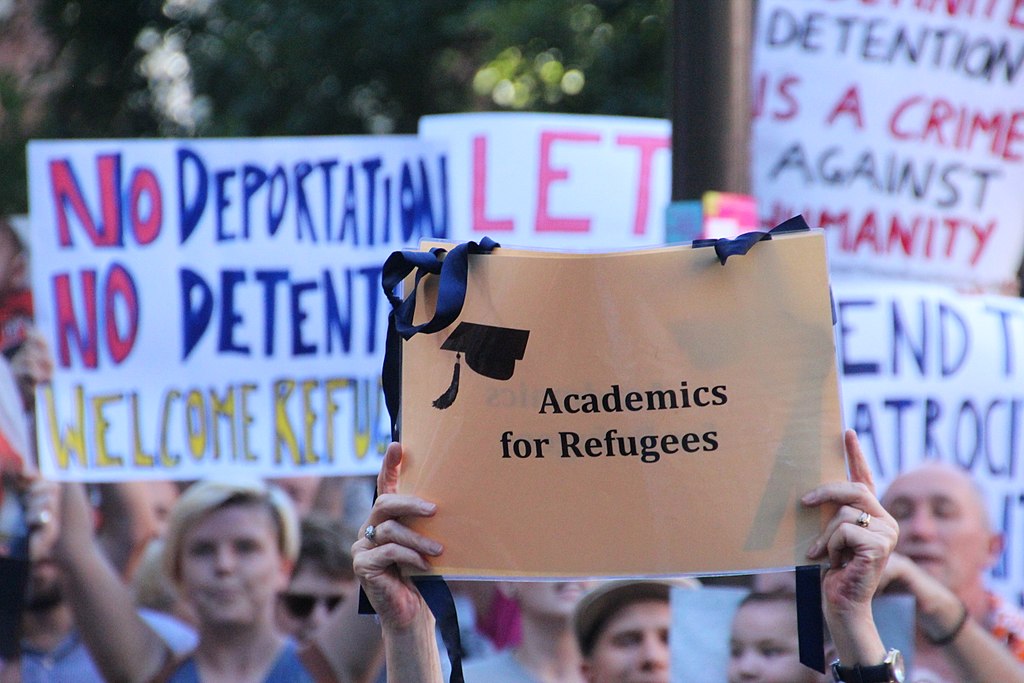 Photo by Takver from Australia, CC BY-SA 2.0, via Wikimedia Commons

Refugees, so the traditional thinking goes, have not only been forced to flee; they have been stripped of their rights to membership in a state (their ‘right to have rights’). In a world of nation-states, they are particularly vulnerable and thus appropriate subjects of a legal regime established expressly to protect them. A UN agency and an international Convention singles them out for special treatment – from among the world’s needy billions – because of their effective statelessness. Other persons who have traveled from home, even if they share conditions of vulnerability with refugees, continue to have a state to which they can return.

Holding this line is also justified on more pragmatic grounds: if refugees are put into a larger category of, say, ‘migrants’ they run the risk of losing the special protections they enjoy – since no one thinks the nations of the world will extend the special rights that refugees sometimes enjoy to all persons on the move.

Finally, keeping refugees separate from ‘voluntary’ migrants supports the claim of refugees that their rights trump the traditionally recognized authority of states to regulate their borders.

Non-refoulement – the international principle that forbids a country from returning asylum seekers to a country where they would likely face danger – is an aggressive incursion on state sovereignty. Some migration scholars see ‘sovereignty’ as an unjust claim to police borders, and would move beyond non-refoulement to a universal right to free movement. But the majority of refugee scholars take a more moderate stance: we (and I include myself here) are not asserting a right of free movement for all persons, we can say; we are simply saying that persons should not be returned to places where they will be persecuted.

For many decades, the post-war policy lines drawn between refugees and migrants seemed almost self-evident.  That refugee regime was created with a recent past of horrendous persecution and a present and future of persons escaping from behind the Iron Curtain. Humanitarianism and politics combined to support the category of ‘refugee’, which was applied to defined groups identifiable by their persecution. Most of these early refugee groups (Europeans in Displaced Persons camps, Hungarians following the Soviet invasion) were white. So refugees were seen as innocent, or as political allies, and hence worthy of assimilation.

Migrants by contrast were seen as coming for other reasons (primarily economic gain); admitting or excluding them served no obvious political interest; and they might or might not be assimilable. They were guests who had no entitlement to stay, no claim to a need for protection, and no basis for being included in state benefits programs.

In the US, the ‘plenary power’ of Congress to decide how many migrants to admit and on what conditions was affirmed by the courts – based on 19th-century cases grounded in strong notions of national sovereignty. Decades later, as the European Union formed, immigration policy was among the powers reserved to the constituent states.

Thus migrants and refugees fell into fairly distinct, non-overlapping groupings – differentiated by their motives for movement, their place of origin, their politics, and also by humanitarian considerations. 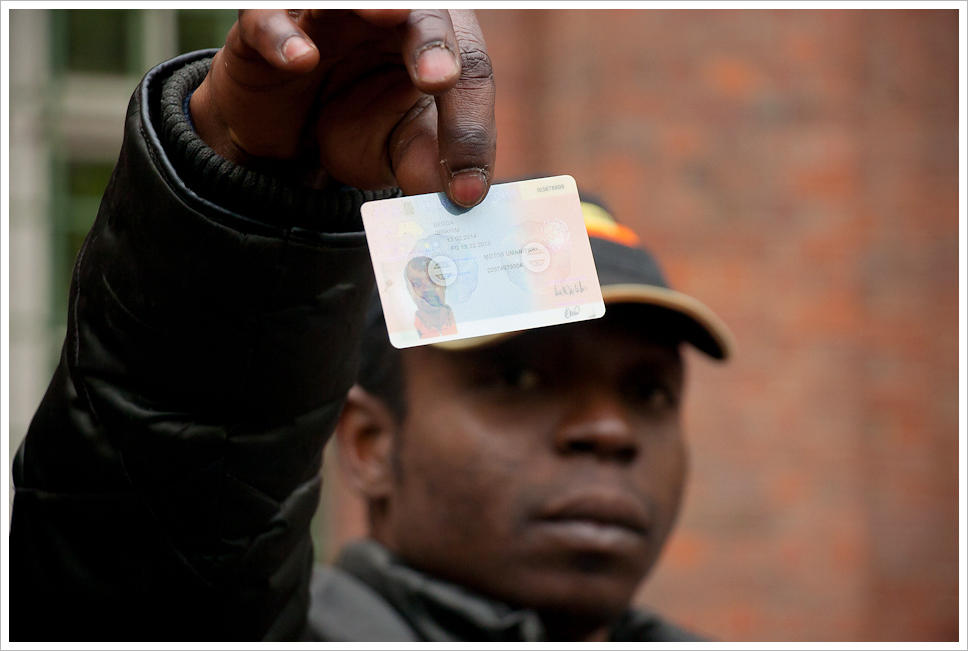 But in more recent years, it has become gradually more difficult to distinguish migrants from refugees – and this for various reasons.

First, the definition of refugee has expanded dramatically. Today virtually anyone fleeing conflict in their home state will be categorized as a refugee (e.g., more than 5 million Syrians), whether or not they can show a threat of individualized or group-based persecution. Furthermore, through very effective lawyering, refugee advocates have significantly enlarged the ‘social group’ category to include, for example, LGBTQ claims, gender-based claims, and claims based on gang violence. It is also now established law that the threat of persecution can come from private actors, not just the state. And with the rise of the idea of ‘climate refugees’, the threatened harm will come from a non-human source.

We are getting closer to an understanding of refugee as anyone whose ‘survival’ is at stake. At some point, it becomes difficult to argue for protection for these groups, and not for persons leaving an economy in ruins, extreme poverty or general conditions of civil disorder. (I was once taken with the aphorism that migrants seek to improve their lives while refugees seek to rebuild their lives. I am less certain today that this distinction holds.)

Second, both refugee and migration scholars now recognize that individual reasons for movement are remarkably complex – involving, to name a few, personal characteristics and risk appetite (i.e., when a person decides to leave a dangerous or economically distressed situation for uncertainty elsewhere), the location of family, economic opportunities at home and abroad, environmental events and climate change, prospects for the future, the strength of local ties.

The post-war refugee regime has been based on the idea that we can identify the reason a person has decided to flee; but we now see this as a fool’s errand.

Why did millions of Syrians leave while millions of Syrians remained? Why do tens of thousands of central Americans travel to the US but a larger number stay home? For each person, there will be a calculation based on a wide range of factors. For Jews escaping Hitler, Rohingya fleeing Myanmar, and Darfuri fleers leaving Sudan, these reasons may be pretty clear. But these ‘classic’ refugee situations – severe government persecution of an identifiable group – are now rare. The emblematic forced migrant today is probably the Central American who has left a state with a corrupt government, gang violence, recent environmental events (hurricanes and drought), a failing economy, and no prospects for an improved future at home. Refugee or migrant?

Third, the concept of state sovereignty can no longer play the role it had in the past of separating refugees from migrants. The nation-state ‘container’ is cracking. Borders are ‘shifting’ (Shachar). Regional free movement agreements, visa waiver policies, and dual nationality mean more unrestricted border crossings – that is, many movers no longer meet a border guard when leaving their state and entering the territory of another. Asylum-seekers gain admittance and even if denied status are rarely returned home. Temporary protection measures for persons fleeing natural disasters permit entry and often result in long-term residence. In all these ways, the image of a fortress state permitting in only immigrants it chooses to admit and refugees it has good reason to protect is fading from view.

Finally, work of critical migration scholars has had the effect of calling into question the justice of the post-war distinction between refugees and migrants. The focus on settler colonialism has denaturalized claims of sovereignty and the legitimacy of borders. At the same time, examination of the legacy of colonialism abroad shows how deeply implicated the Global North is in flows from the Global South. Factor in climate change – an environmental crisis primarily caused by developing states and primarily suffered by developing states – and the moral claim for the admission of refugees but the exclusion of migrants appears increasingly weak.

In other words, my title may be posing the wrong question. Perhaps it’s time to ask if refugee scholars should continue to draw a line between refugees and migrants.