Head in the sand, reactive, apolitical: in ‘Blätter’, a damning verdict on Merkel’s reign. Also: Jürgen Habermas on the lockdown debate and Bernd Greiner on the end of the War on Terror.

Head in the sand, reactive, apolitical: Albrecht von Lucke’s verdict on the Merkel era is anything but favourable (German here). She has failed, he writes, in three major areas.

The first is climate. In her book ‘The Price of Survival’, published in 1997 when Merkel was environment minister, she wrote that ‘anyone who claims that environmental protection is to be had at no cost is misleading the public.’ As federal chancellor, however, her climate policy has been characterized by the discrepancy between knowledge and action. In this respect, writes von Lucke, she was the perfect expression of an epoch and a society that wanted one thing above all: to be left alone by politics.

The second area is foreign policy. Here Merkel’s reaction to the Afghanistan collapse was telling: rather than confronting its implications for Germany’s and Europe’s commitment to a human rights-based foreign policy, she immediately cast doubt on the prospects for Germany’s military engagement in Mali.

This reaction typifies her entire approach: ‘For Merkel, looking ahead did not mean the possibility of imposing something inconvenient on people, but acting on the basis of future electoral results, using “asymmetric demobilization” and the soporific motto: “you know me”.’

This was above all the case for her policy in Europe, the third and perhaps greatest of Merkel’s failures. Again, her policy during the euro crisis – externalize the risks and costs, in this case caused by German banks and investors – closely resembled her climate policy.

So how was Merkel able to establish a reputation as a successful crisis manager and to remain the most popular politician in the country. Primarily, writes von Lucke, it was the tacit agreement with the German electorate that she would preserve the status quo. But it also has to do with her ‘progressive neoliberalism’: culturally adaptive and in step with the liberal-green trend, while presiding over the widening of the gap between rich and poor. 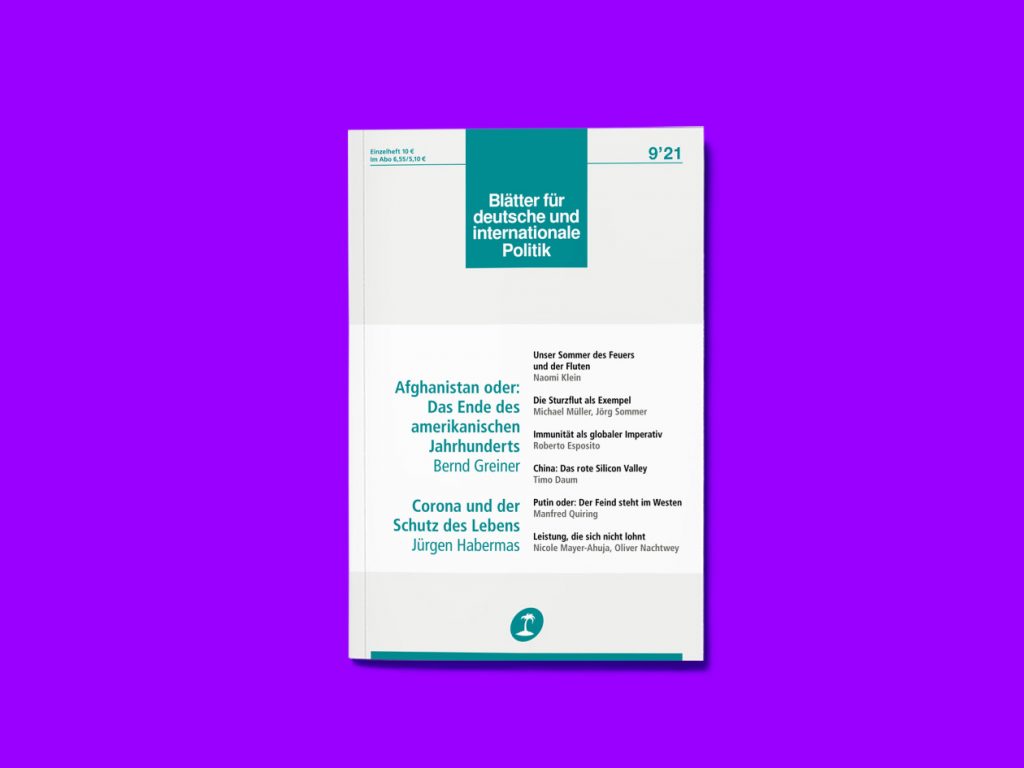 The debate between those who argue that the state has a duty to ‘enforce solidarity’ and those who argue that rights have been violated by incommensurate lockdown measures rests on a false premise, argues Jürgen Habermas. The confusion between minimizing casualties and not exceeding hospital capacities overlooks the question of whether a government of a democratic state is constitutionally obliged to pursue the former goal. Only if this is not the case is a government free to pursue measures that lead to avoidable deaths, argues Habermas.

Will America learn the lesson of the Afghanistan withdrawal – that confrontation and aggression is inevitably if belatedly repaid in kind? Biden’s approach to China suggests not, writes historian Bernd Greiner. But Cold War rhetoric ignores a basic reality: that in today’s networked world it is impossible either to disconnect from China or to construct a parallel universe where only one’s own rules count. ‘To recognize facts is not to capitulate to them: often, it is the only way to alter them to the benefit of all.’