English is the language that makes communication between speakers of different languages less difficult and more inclusive than any other. With the enlargement process it became the lingua franca of the EU. Brexit will not change this – on the contrary, the UK’s departure is an occasion for Europeans to confidently reclaim a continental hybrid.

If there has been one major trend in the linguistic development of Europe over the course of the last few decades, then it has been the rapid increase, over generations, in the proportion of non-Anglophone Europeans capable of communicating in English. German is still more widely spoken than English among the oldest citizens of the European Union, but among young adults, English is spoken by over three times as many people as any other language.

The trend is being driven by the interaction between two mechanisms. The first is that the speed and quality of the language-learning process are determined by the probability of the language being used; and the second is a tendency to systematically adopt the ‘maximin’ language.

The first mechanism is self-explanatory. The more likely it is that we will use a language, the quicker and more effectively we learn it. This is because there is no better way of learning a language than practicing it, and because there is no better incentive to invest time and money in language-learning than the prospect of having to use it. But the second mechanism requires more explanation.

In other words, they will use the language with the maximum level of minimum competence, or the maximin language. Whether in a conversation between two people or a hundred, we tend to choose the maximin language because it makes communication less difficult and excludes fewer people than any other.1 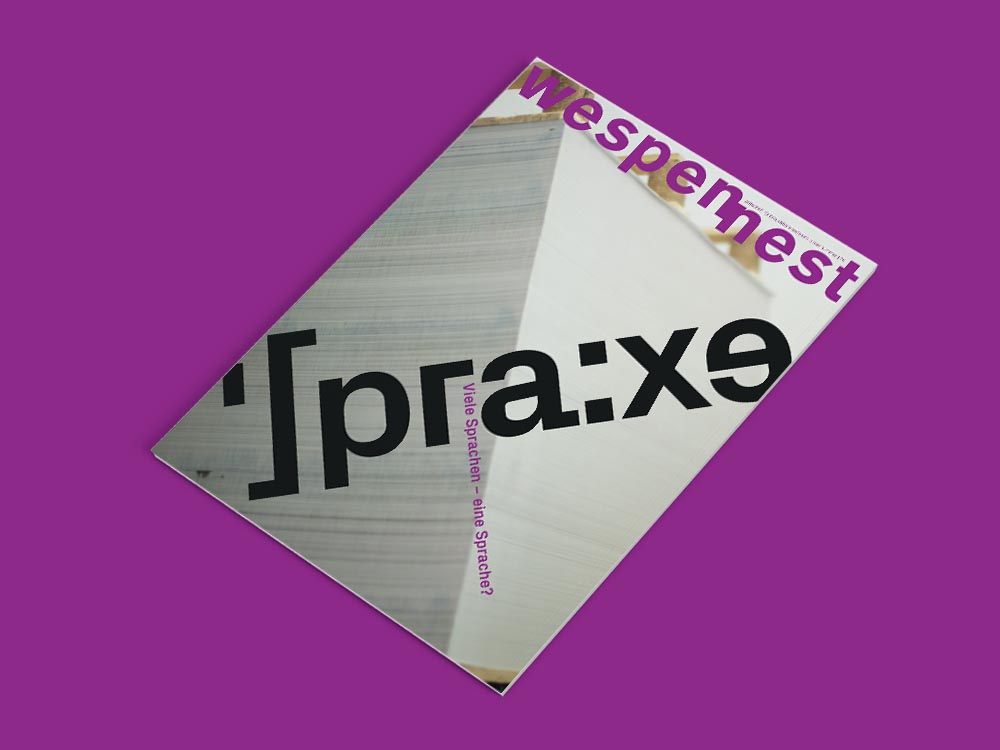 The interplay of these two mechanisms accounts for the increase and decrease in the use of languages in a multilingual space, and in particular for the spectacular spread of English throughout Europe over the last few decades. For example, when knowledge of English overtakes that of French among Italians, and that of Italian among French, most conversations between French and Italian people will take place in English. Since both groups will have more opportunities to practice English than the mother tongue of their counterparts, they will invest more time and resources in learning it. As a result, English will  more often be in the ‘maximin’ position and hence be used more often, further increasing the reasons and opportunities to learn it – and so on.

This dramatic expansion is not limited to Europe, of course. Museums and exhibitions throughout the world provide information in the national language for locals and in English for foreigners. In aeroplanes, safety instructions are communicated in the language of the airline and in English. In Beijing, the names of streets are written in Chinese and English.

Is it possible that one day the situation will be reversed in favour of Mandarin, the language with the most native speakers in the world? A few years ago, around 40 million people outside China were learning Mandarin, while four times that number (the equivalent of half the population of the United States) were learning English – in China alone.2

Thanks to the maximin effect, the trend is irreversible. And the biggest winners will be the Chinese. One day, everyone in the world except native English speakers will be bilingual in English and their mother tongue. This bilingualism will be most valuable for those whose mother tongue is most widely spoken. 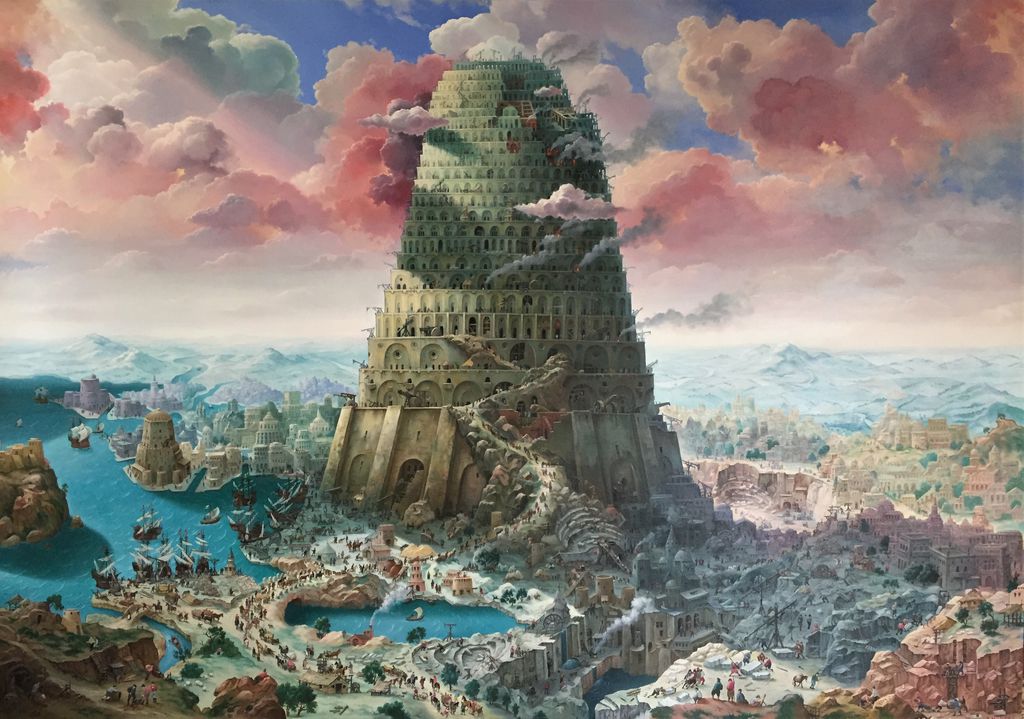 The Tower of Babel seems to flourish in Alexander Mikhachyk’s 2019 painting. Photo from Wikimedia Commons.

The global spread of English has had an acute and significant impact on the institutions of the European Union. Supposedly founded on the equality of its constituent parts, the EU initially entertained the illusion that the official languages of the member states would coexist on equal footing. But the illusion was short-lived: successive expansions multiplied the number of official languages, while joint decision-making demanded ever more frequent exchanges, extending far beyond a small polyglot elite. Even during the first decades of the European institutions, when there were far fewer official languages than now, equality in principle was matched by huge inequality in practice.

Back then, French was the dominant language, for four reasons: the influential role played by French-speaking founding fathers such as Schuman, Monnet and Spaak; the location of institutional headquarters in three majority French-speaking cities; the inhibition of the Germans and Italians after World War II; the fact that French was the second language of most British people. As a result, the first version of the texts issued by the European institutions were mostly drafted, discussed and adopted in French, before being translated into the other official languages.

English began to catch up with French after the EU was expanded to include Sweden, Finland and Austria in 1995, and it overtook French after the enlargement of 2004. Since then, the first version of documents has almost always been in English. Press conferences are also normally held in English. And whenever a message needs to be displayed in a single language on one of the European institution buildings, that language is English.

But will all that now change? Before Brexit, English native speakers in the European Union were outnumbered only by German native speakers. After Brexit, the English language has fallen to eighth place, behind Dutch. Will its use in European institutions therefore decrease?

No. What made English the lingua franca of the European Union was neither its official status within the Union, nor the fact that the United Kingdom was a member state. Rather, the maximin mechanism gives English, the language that is already far the most widely spoken, a self-perpetuating advantage. Moreover, since Brexit, the English language has assumed a new neutrality; the choice of English will no longer be seen to confer a significant advantage on a major member state.

At the same time, it will be up to Europeans to reappropriate English as their own.

Historically, English is a continental language imposed by two consecutive invasions from the European mainland onto the majority of the population of the largest island off its coast. The Angles and Saxons exported the Germanic component in the fifth century, while the Normans grafted on the French elements in the eleventh. The resulting hybrid was later imposed onto the rest of the British Isles and a large part of North America and Oceania.

We Europeans now have the task of remaking it as our own. We must stop associating English with the British flag, as some websites persist in doing. We must dare to speak this language, which is also our language, without inhibition and with the full range of our accents. We must authorize ourselves to add to it with whatever innovations we wish.

Up until 2016, an official report was published entitled ‘Misused English words and expressions in EU publications’. It was ‘mainly designed for those who, for reasons of character or personal taste, would like their English to be as correct as possible’. For example, it lambasts the use of ‘sheep meat’ to refer to the meat that the British, thanks to the long-lasting effects of the Norman invasion, happen to call ‘mutton’.

The intention is kind. But it is not the job of the British to impose their insular version of our lingua franca upon us. Many in the United Kingdom saw Brexit as a way of taking back control of their country. It is now time for us to take back ownership of our language!

This reappropriation, however, is a mission that is far from accomplished. It is vital to democratize English-language competence in the EU as quickly and thoroughly as possible. Joachim Gauck expressed this urgency powerfully – and not a little bravely, given that at the time he was the head of the state whose official language is the most common mother tongue in the European Union:

It is true to say that young people are growing up with English as the lingua franca. However, I feel that we should not simply let things take their course when it comes to linguistic integration. For more Europe means multilingualism not only for the elites but also for ever larger sections of the population, for ever more people, ultimately for everyone! I am convinced that feeling at home in one’s native language and its magic and being able to speak enough English to get by in all situations and at all ages can exist alongside each other in Europe. A common language would make it easier to realize my wish for Europe’s future – a European agora, a common forum for discussion to enable us to live together in a democratic order.

The same point has been made before, including a long time ago by philosopher Jürgen Habermas.3 To honour its claim to be democratic, the Union must be able to count on a sufficiently unified demos, a common forum where European citizens can talk and listen to each other. And without a shared language, there can be no common forum.

Reliance on expensive interpreters is not a viable alternative; nor is the development of oral translation software or a multilingualism with no shared language. A shared language rather than a single language, a language that can and must be superimposed on national and sub-national languages without replacing them. The common forum that the European Union needs will therefore require widespread bilingualism (at the very least).

In some member states, the younger generations are not far from achieving this bilingualism. But bilingualism is a more distant prospect in EU countries where the official language is a ‘large’ language, with many millions of speakers in Europe and elsewhere.

This lag is due in part to the fact that people from these countries tend to meet others who do not speak their language less frequently. But it is also because Anglophone films tend to be released in dubbed versions in the most widely spoken languages and in subtitled versions in others. The most effective and inexpensive way to democratize the lingua franca would be a concerted policy of showing subtitled versions on television, in cinemas and on the internet, and of discouraging or even prohibiting dubbed versions.4

But even in places where the media environment is least conducive to it, the maximin effect is at work. Brexit will change nothing; English is not destined to be used less. On the contrary, it is likely to spread even further. And it is crucial that it does, throughout Europe and outside it, so that a supranational democracy can gradually take form.

See Van Parijs, Linguistic Justice, §§ 3.7-3.8). See also languageknowledge.eu for the spread of English-language competence in relation to the principal method of translation used on television.