Inequality upon a pedestal

Even to engage in debate over the existence of monuments in their current form is to acknowledge a connection between the colonial past and present-day inequality. For many, defence of heritage serves as a pretext for preservation of the memorial status quo.

On the 11 June, a bust of Leopold II near the Square du Souverain in Brussels was toppled and daubed with red paint. So too were road signs along Boulevard Leopold II and a bust of King Baudouin. On the same day, the equestrian statue of Leopold II in the Place du Trône – a regular target of anti-racist activists – was also defaced. Similar acts also took place in Halle, Ostend, Antwerp and Ekeren.

At the beginning of June, a petition was launched demanding the removal of all statues of Leopold II from the City of Brussels. By 7 July 2020, it had gained more than 80,000 signatures. Among other grievances, the petition cited Leopold’s ‘contempt for life and the Congolese folk’. ‘In twenty-three years,’ it states, ‘this man killed more than 10 million Congolese, without ever setting foot in the Congo.’

A counter-petition in favour of keeping the statues attracted more than 20,000 signatures. The reasons given included: ‘Because I do not deny my history. A country that cannot accept its history cannot exist’. According the counter-petition, Leopold ‘wasn’t a pro-slavery king, he just delegated power to certain people in order to govern the colony’.

The debate is particularly heated on Facebook. Groups in favour of keeping the statues invariably invoke ‘defence of heritage’ and ‘respect for history’ in their descriptions. However, comments frequently take a rather different tone.

The group ‘Conservons et défendons nos statues et monuments historiques’ (Let’s protect and defend our statues and historical monuments), for example, is a forum for colonial nostalgia. Comments heroize the Belgian colonists or describe their suffering after the colony gained independence. ‘People have no respect for the Belgians who went to Africa, and even less for those who suffered or lost their lives there’, reads one; ‘the only amputated hands I saw belonged to a little girl murdered by the militia at the time of independence’, says another.

Many comments reproduce clichés of colonial history: ‘we gave them education’; ‘what would they have preferred, living in the bush instead of getting an education?’; ‘they only have roads thanks to Belgians’. Others are openly racist: ‘they don’t even know how to write and they try to rewrite history’; ‘they left their own country to fall to pieces and they come and take advantage of state handouts in Belgium’; ‘vandalism is the only thing they know how to do, Kinshasa is a massive dump, soon they’ll turn Brussels into one too.’ Some comments encourage people to vote for far-right parties: ‘the only solution is voting for Vlaams Belang’.

The political parties generally agree that the symbols should be kept in place, however that they be reframed appropriately. The socialist parties emphasize the importance of memory work – the Brussels Regional Parliament has passed a resolution to that effect – and the need to explain why colonial symbols are retained. The green parties demand a collective re-appropriation of public space, including a clear contextualization of colonial symbols and the erection of monuments honouring people who fought against colonialism and discrimination.

The Humanist Democratic Centre (Christian democratic) acknowledges the discontent of a section of the population that feels discriminated against, but concludes that, rather than erasing their history, Belgians must come to terms with it – again by contextualizing colonial symbols. The Francophone Democratic Federalists say the same thing and suggest a memorial to the victims of colonialism. Only the Worker’s Party of Belgium calls for the statues of Leopold II to be removed and placed in museums. 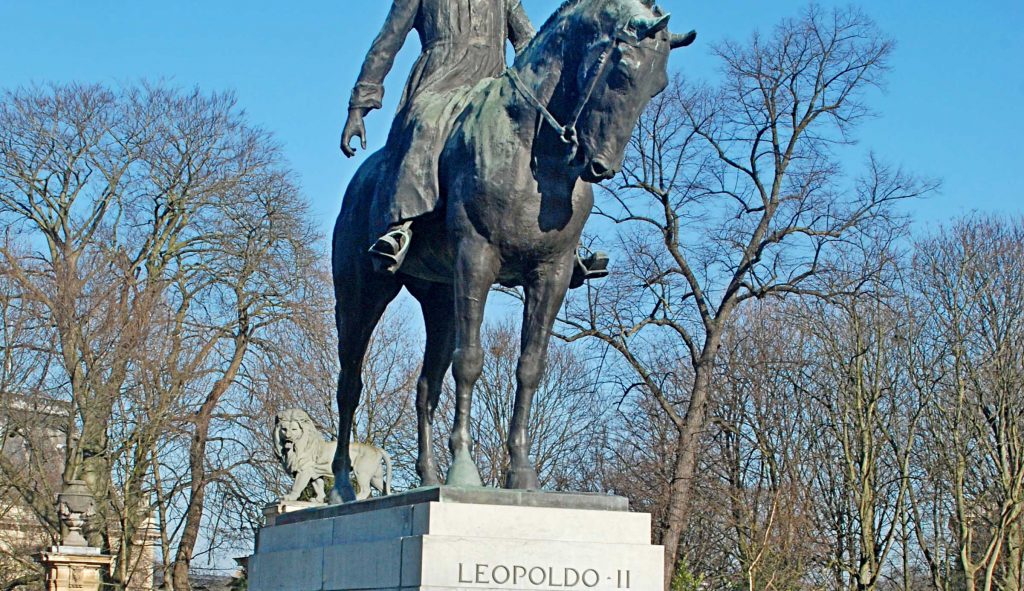 Removing the statues, argue the ‘defenders of heritage’, would amount to denying historical facts that objectively took place; in short, to hiding the historical truth. But to equate these statues with history as such is to reduce history to its most static form. Nevertheless, many people cling to the simplistic narrative that these statues embody, in reaction to what they see as the decline of civilization. This ignores the work done by historians on the Belgo-Congolese colonial past, which is much more advanced than people generally realize. ‘We are disconcerted to see politicians calling for the discussion and “uncovering” of historical episodes that have long been acknowledged by the majority of historians’, wrote the academics Amandine Lauro and Benoît Henriet recently in an open letter.1

These statues do not simply preserve the memory of historical events; their presence legitimates a specific view of the past and, by extension, the present. Leopold II and many other figures who played a central role in Belgium’s colonization of the Congo (e.g. Émile Storms, Henry Stanley, Ernest Cambier, Théophile Wahis) were honoured in various ways in the public space, but nothing of the sort was done for the people (Belgian or Congolese) who resisted colonization. On the contrary, the Congolese people as a whole were rendered almost invisible during the entire colonial period.2

At the turn of the twentieth century, Belgium was gripped by a mania for statue-building. The monuments tended to fall into one of three categories. The first was ‘the glory of the empire’, as represented by the statues of Leopold II. Their aim was to depict Belgium as a genuine international power and to give the population a sense of belonging to the ‘Belgian Empire’.

The second was the narrative of Belgium as liberator and civilizer. Colonialism was legitimized as a ‘fight against slavery’ and statues of military figures, some responsible for massacres, were intended to support this narrative. The third category was exoticism, as expressed by colonial motifs including animals and fruits. Exoticization was behind the human zoo in Tervuren in 1897, where Congolese people were forcibly confined to a ‘negro village’ and put on display. The exhibition of ‘curiosities’ was intended as much to amuse the public as to demonstrate the inferiority of Congolese ways of life.

Statues narrated the version of history that the regime wanted to convey, a version also portrayed in a vast quantity of colonial propaganda.3 The abundance of statues glorifying Leopold II and the colonialists in Belgium, and especially in Brussels, was the result of a propaganda campaign undertaken by the state and private companies that benefited directly from colonialism. On the whole, however, Belgians proved resistant to this attempt to convince them of the merits of ‘the colonial enterprise’. We know that Leopold II was far from popular at the time of his death.

More than a few relics

These days, there is no longer any question of erecting new symbols glorifying colonialism. The inauguration of Lumumba Square – formerly Square du Bastion – in Brussels in 2018 marked a turning point in public opinion, even if it remains an isolated gesture. However, the preservation of the majority of colonial symbols is also a choice.4

So what meaning do these symbols have in 2020? There are two main areas of significance. The first is the nature of relations between Belgium and the now independent Democratic Republic of the Congo (DRC) (and, more generally, the relations between former colonial powers and the territories they occupied). The second is the place of Belgo-Congolese (and Belgians of African descent more generally) in contemporary Belgian society.

Relations between Belgium and the DRC are profoundly asymmetrical. Belgium has retained, to a greater or lesser extent, a political and economic influence over its former colony. Belgian industrialists still have a significant presence in the Congolese economy. Although Congolese companies also invest in Belgium, their relative weight in the Belgian economy is tiny.

In politics, the imbalance was most vividly demonstrated at the end of the 2000s, when a Belgian minister of foreign affairs told the Congolese government that ‘the $200 million we give you in aid entitles us to a “right of moral oversight” over your politics’ (he also demanded a reshuffle of the Congolese government). Although these remarks came from a controversial figure and provoked much criticism within political circles, they were a stark reminder of the relations of domination, not to say predation, between various private and public actors and the DRC.5

The role of Belgo-Congolese people in Belgian society, meanwhile, is characterized by inequalities and social marginalization. In contrast to other marginalized groups, Belgians of African descent have a higher average level of education than the national average (sixty percent have completed some form of higher education). Nevertheless, unemployment among this group is four times the Belgian average.

Bearing in mind these two areas, removing symbols of colonialism from the public space, or merely discussing whether they should be preserved, amounts to tacit acknowledgment the connection between the colonial past and present circumstances. It means admitting the discrepancy between the values of democracy and human rights that we claim to uphold and the reality of an unequal society. Leaving these relics where they are is a way to avoid having to probe too deeply into an inglorious past; to avoid having to confront the possibility that racial discrimination is structural and deeply embedded in the history of the country.

Giving credence to demands for the removal of colonial symbols means setting in motion a far-reaching process. Recognition of the abuses of the past is likely to lead to wider debate about the transformations that society must undergo in order to conform more closely to the values it claims to hold. This is what most scares those who resist entertaining the idea of removing colonial symbols from public spaces.

So, should the statues be removed or not? Evidently, there is no easy answer. The question is about more than a few relics of the past. But whatever the answer, the discussion is a route into a wider issue over social relations of domination. Almost three-quarters of Belgians of African descent think that there is not enough public debate about colonialism. Talking about the presence of colonial symbols provides an opportunity for thinking about public space no longer as the property of one group at the expense of another, but as a common good that expresses the equality of all members of society.

One exception is the transfer of the bust of General Storms from Ixelles to the Royal Museum for Central Africa in Tervuren.

The exploitation of the mineral resources of the eastern provinces of Kivu is an example.

Under the commercial imperative of ratings and likes, public service broadcasters are moving complex and quality content to online only. As the example of Germany’s Westdeutsche Rundfunk shows, this fragments audiences, thereby undermining a core principle of public service.