‘Merkur’ focuses on changing perceptions: Germany grapples with the remembrance of its colonial past; the UK’s ‘careless’ care economy comes under review; and theatre’s physicality faces a virtual challenge.

This month Merkur recognizes that the German politics of remembrance is shifting. Incumbent narratives of post-war democratization, renunciation of war and National Socialism, and especially the Holocaust’s accepted place are giving way to heated debate focused on Germany’s colonial past. According to Sebastian Conrad, profound social changes are behind this development: while the established story was a prerequisite for Germany’s western geopolitical integration, today’s globalization requires that its past be recognized with the history of worldwide colonialism. Such a transition is still met with resistance in Germany, but ‘the Holocaust and colonialism shouldn’t be perceived as two opposing, incompatible paradigms’, concludes Conrad. 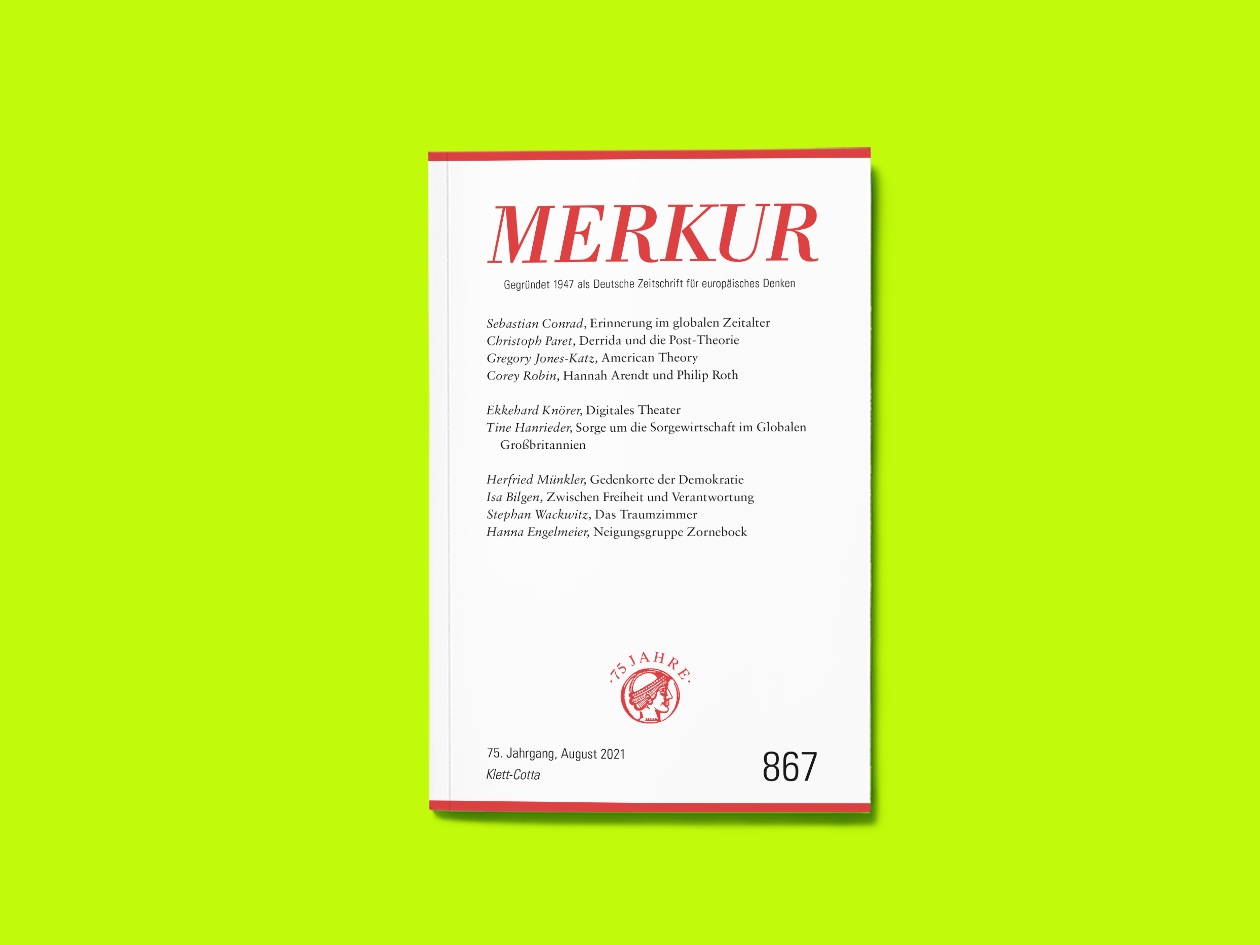 Tine Hanrieder describes just how bad things have got for the care economy in ‘Global Britain’. In the wake of Theresa May’s failed 2017 National Health Service plan and Boris Johnson’s pandemic-weary pledge to make the NHS ‘battle ready for winter’, ‘no government really wants to touch the “zombie” theme of care’, writes Hanrieder.

‘In London 41% of employed caregivers work under the notorious zero-hour contract where they only earn when in service,’ continues Hanrieder. ‘Nowhere is the employee turnover rate as high as in the care sector: almost half of all caregivers leave after one year in the job.’ Additionally, since the UK left the EU, migrants who filled many care work roles are significantly reduced: ‘migrant workers made up 38% of London’s adult care provision and 17% in England in 2018–19.’

The sector, almost completely privatized during Thatcher’s era, needs overhauling. Writers such as Emma Dowling propose that the solution to such depleted social services should take the form of smaller, collective, neighbourhood groups. Hope is placed in operations similar to those cooperatives that pulled communities out of austerity in Greece, while acknowledging the issues of romanticizing the potential of small groups that can equally lead to social control, patriarchal structures and xenophobia.

The stage in times of crisis

What becomes of theatre without venues? Pandemic-related closures have forced the genre to rethink its ties to physical performance, writes Ekkehard Knörer, who asks whether ‘theatre remains theatre when productions are recorded and played back digitally.’

After looking at a variety of new online productions, ranging from mere recordings of stage events to original digital formats, Knörer highlights three exemplary productions: Sebastian Hartmann’s recent plays succeed in being genuinely digital theatre, clearly recognizable as coming from the theatre and yet being something else – a reflection on what remains of theatre when it is transferred from the stage to the screen.

This article is part of the 12/2021 Eurozine review. Click here to subscribe to our weekly newsletter to get updates on reviews and our latest publishing.

‘Positionen’ remembers the life and work of Romanian avant-garde composer Octavian Nemescu. Also, a focus on the art of the musical: TV casting shows as mass-market theatre; and musical theatre as space for inter-cultural dialogue.