‘Public Seminar’ assesses the politics of shame: how Afropessimism challenges the established meaning of privilege; the questionable religious fervour of antiracists; and when global human rights ‘naming and shaming’ backfires.

In her book Political Emotions, philosopher Martha Nussbaum maintains that shame fractures social unity, inducing those who feel it to withdraw and hide. Yet shame, whether it affects an individual or a political entity, can also be a vector of change, as this issue of Public Seminar shows. 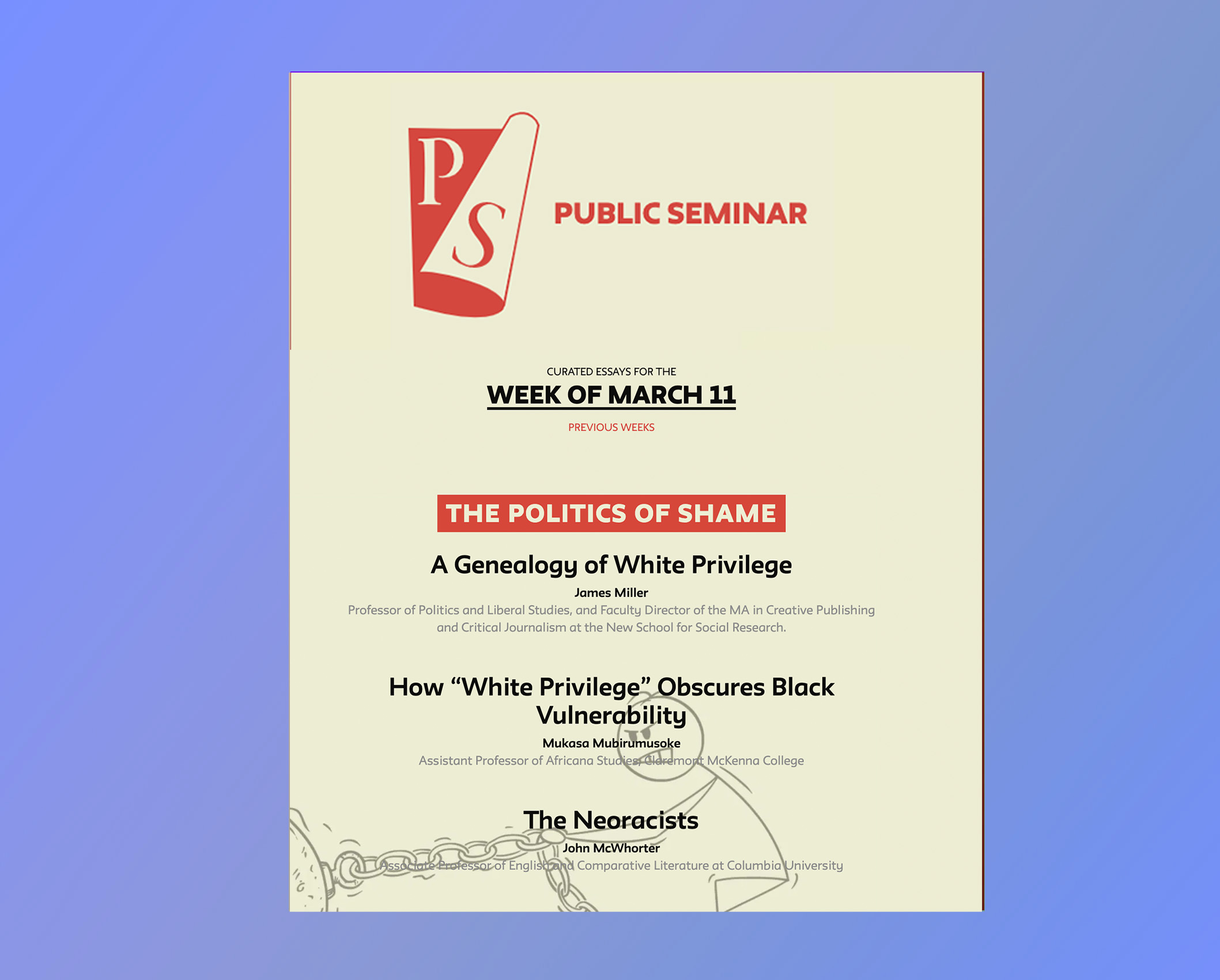 ‘Both shame and guilt can play a powerful and arguably indispensable role in the progress of human civilization toward more peaceful and cooperative forms of coexistence,’ writes James Miller.

The discourse on white privilege suggests that guilt and shame stem from introspection based on a genuinely anti-racist and democratic vision. However, when these same feelings give rise to ritual confessions, their effects can be counterproductive.

Both in academic and public conversations, white privilege is commonly understood as an inequitable distribution of access and goods, an ‘invisible knapsack’ – in Peggy McIntosh’s words – to become aware of and unpack. A more equal distribution of wealth, however, does not address the white supremacy premises on which American society relies. Nor does, according to an Afropessimist perspective, abandoning discourse on white privilege to pursue equality exclusively through anti-capitalistic class struggle.

‘In a white supremacist society like America, the poorest white laborer can imagine lording over a Black person simply by being white. This poses the question: In what ethical universe could the possibility afforded by whiteness to dominate another human being just because they are Black be considered a “privilege”?’, asks Mukasa Mubirumusoke.

Third Wave Antiracism, in the mainstream since the 2010s, ‘teaches that racism is baked into the structure of society, so whites’ “complicity” in living within it constitutes racism itself,’ writes John McWhorter.

Whilst endorsing the basic premises of Black Lives Matter, McWhorter argues against the religious nature of the new antiracism, whose contradictory tenets exploit ‘modern Americans’ fear of being thought racist, using this to promulgate an obsessive, self-involved, totalitarian and unnecessary kind of cultural reprogramming’. In their religious fervour, the new Elect mistakenly believe that ‘unempirical virtue-signaling about race is a form of moral enlightenment and political activism’.

‘Naming and shaming’ has become a preferred tactic of global human rights advocates. But is putting an abusive country in the spotlight a good strategy to improve human rights conditions around the world?

‘Criticism exchanged between friends and allies is more credible and thus more effective, but also more difficult to mobilize. Shaming aimed at rivals and adversaries, in contrast, is ubiquitous but often backfires,’ argues Rochelle Terman.

Yet, for the shamer, the advantages can be independent of a possible backlash. ‘In international relations, actors generally shame in order to boost their own reputation or to stigmatize the target,’ Terman writes, even if doing so may eventually exacerbate human rights violations.

You can read James Miller’s essay from this issue in Eurozine too:

The patriarch and the pope