Climate change, COVID-19, social injustice: ‘Esprit’ explores how current notions of crisis affect our relationship with time and our (in)ability to change our circumstances. Also: the revolutionary origins of ‘la question Woke’.

In Esprit, Nicolas Léger discusses the way that cultural industries and digital technology both exacerbate and remedy feelings of helplessness in a society always on the verge of ‘shipwreck’. As crises unfold on our screens at an increasing rate, ‘our position is very often that of the spectator, sometimes to the point of exhaustion’. At the same time, it is impossible to be ‘contemplative and serene’, because the immediacy of technology forces individuals to react to and interact with the ‘spectacle’ of crisis in a vain attempt to find consolation.

GAFA’s reaction takes the form of fantastical projects that once existed only in fiction. These increase global inequality and have ‘devastating ecological consequences’. But fiction can also be a source of hope and comfort; even post-apocalyptic narratives provide the space to reflect on the real world. ‘Fiction is a world that refuses to let ours sink … It is the only world capable of making our situation somewhat liveable’. 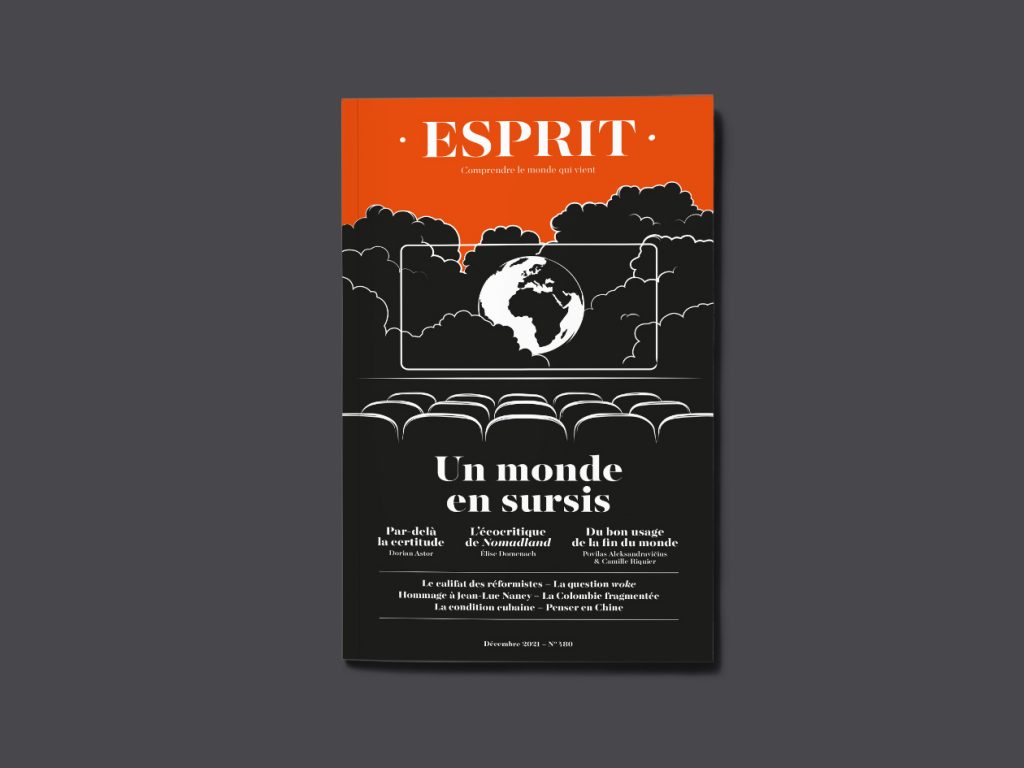 Philosopher Dorian Astor, interviewed by Nicolas Dutent, discusses the human relationship with certainty and uncertainty. Humanity now suffers from ‘too much sense,’ Astor claims: ‘Sense is always in excess, it always says several things at once.’ But ‘the most unambiguous signs’ – above all climate crisis – ‘are the ones that blind us’. We are ‘bending under the weight of facts’ and have such a strong desire to be right that we end up in violent confrontations. We need to learn to ‘decelerate’ and ask, ‘What do you know that I could learn?’

Pure uncertainty isn’t any better. While often linked with the future, uncertainty about the past can also be debilitating – especially for those who have experienced trauma. The solution is to cultivate ‘a kind of superior scepticism which, far from resigning itself to uncertainty by denying that there is anything certain in this world, would maintain all certainties at once, not as true or false, but as either vital or lethal for existence’.

Michael C. Behrent places the roots of ‘wokeness’ in the abolitionist movement and its echoes in the French Revolution. Woke culture calls for a multicultural justice that is considered ‘more essential than preserving cultural heritage or individual liberties’. Woke movements, including antiracism and feminism, are best understood as ‘passions’ rather than political leanings.

The term ‘woke’ is generally used pejoratively: movements associated with it sometimes act ‘in contradiction with democratic principles’ and attract criticism for virtue signalling and the opportunism of ‘economic powers trying to profit from these new sensitivities’. But ultimately, woke movements push democracies to take a critical look at themselves, even if they may not have ‘made any governments crumble’.