The EU: The real sick man of Europe?

Contemporary European politics is a building site that makes a lot of noise but on which nothing ever gets built, said German political sociologist Claus Offe at the concluding event in Eurozine’s debate series “Europe talks to Europe”. Pessimistic yet invigorating, the discussion featured prominent intellectuals and opinion makers from western and eastern Europe. 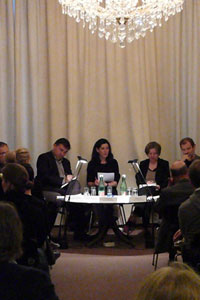 Concluding the debate series Europe talks to Europe, Martin Simecka, Sonja Puntscher-Riekmann, Ivan Krastev and Claus Offe met in Vienna on 13 April to discuss the (ill)health of the European project. The discussion was moderated by Therese Kaufmann of the European Institute for Progressive Cultural Policies.

Introducing himself as an “expert on disintegration”, Slovak writer and journalist Martin Simecka recalled how shortly after 1989, seeing Slovak nationalists in Bratislava, he had the intimation that Czechoslovakia would collapse. Now he has the same forebodings about Europe. You can see this in the language with which Europe is being discussed, he said. When a declaredly Europhile outlet like EUobserver adopts Stalinist vocabulary to describe the institutions of the EU, you know the mood is bad (Simecka was referring to the use of the word “troika” to denote the trio of the European Commission, the European Central Bank and the International Monetary Fund on their recent visit to Lisbon).

As with communism, the root of Europe’s problem is its failure as an idea, according to Simecka. Europe used to be united by its past, its motto “never again”. Now it is united by the fear of the future: of migrants and financial collapse. As an “artificial” political union, Europe is inherently harder to defend than the nation. The alternative, as the fate of Czechoslovakia showed, is re-nationalization.

Throughout its existence, Europe has been considered sick, commented political theorist Sonja Puntscher-Riekmann: think of the “Eurosceloris” of the 1970s and early ’80s. If politicians do have ideas about Europe, then they fail to sell them. Instead of explaining to their publics what they have decided in Brussels, they portray themselves as the heroic defenders of the nation. “The EU is not the sick man of Europe”, she said. “The sick men of Europe are the nation states; the EU is what the members states want it to be.” As for European identity: that will come through practice, not principle.

German political sociologist Claus Offe was less confident about the chances of a new Euro-enthusiasm. Agenda 2020, with its idea of the European social model, is shamelessly ambitious; in the current climate, the overriding concern is surviving the economic crisis, politicians out-competing one another to be the more “austere”. European society is a building site that makes a lot of noise but on which nothing ever gets built, remarked Offe. The idea of a “European Republic” would demand conditions – forced unification or separation from empire – for which no parallel exists in the Europe of today.

It is not the problem we are fighting in Europe but our panic about the problem, commented political scientist Ivan Krastev. Historically, European identity has been based on its relation to America; in the “post-American world”, Europe is no longer the beneficiary but the victim. Today Europe faces a world that it expected to go its way but didn’t. 1989 created the impression that societies could be changed in its image; in 2011, the “demographic imagination” has triumphed. The Arab revolutions are seen not as an opportunity but a threat: of immigrant intrusion.

It is these demographic fears that are shaping the project of the European Union, said Krastev. The most successful politicians are those able to minimize risk. Within 48 hours of the nuclear catastrophe in Japan, Germany had changed its energy policy. The problem here was not the change itself but the speed of the change. When you are sure of yourself, he concluded, you see disappointments as a challenge; when you are unsure, you see them as the truth.

A full text based on the discussion will appear in Eurozine in May.

Read all the debates in the series Europe talks to Europe.

After Brexit: Shock and disbelief

How the UK referendum result is being received across Europe