Tymoshenko: Wake-up call for the EU

The EU shouldn’t be surprised by the Tymoshenko verdict: its support of anything nominally reformist has been perceived as acceptance of a range of repressions. Tough measures are now needed if another authoritarian regime is to be prevented from forming on the EU’s eastern border, writes Mykola Riabchuk.

Back in April 2010, I happened to talk to the ambassador of a leading EU country in Kyiv. My message was short: “How can you tolerate everything that is going on over here?”

I meant, first of all, the parliamentary coup d’etat staged in March, shortly after Viktor Yanukovych’s inauguration, when a parliamentary majority was formed in an absolutely illegal, anti-constitutional way. The usurpers not only created an illegitimate government but also reshuffled the Constitutional Court, which, having purged or intimidated disobedient judges, predictably approved the brutal takeover as “legitimate”.

The ambassador smiled and replied: “You know, the previous government wasn’t exemplary in terms of the rule of law either.”

At the time this seemed to be the dominant EU attitude to developments in Ukraine. Nor was it entirely unreasonable. Within five years the Orange leaders had done their best to compromise democratic ideals domestically and cause “Ukraine fatigue” internationally, above all in the EU. Their ineptness, fecklessness and suicidal obsession with internecine fighting irritated and alienated even Ukraine’s staunchest supporters.

However the Tymoshenko verdict should by now have caused European politicians to sober up and recognize some significant facts. 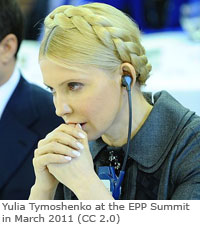 First, in political terms, post-Orange Ukraine did not differ essentially from the Balkan states after the fall of Communism. With low levels of social trust and bitter political infighting, these countries were in desperate need of an external arbiter; if compromises were to have been achieved and implemented coherently, third-party enforcement would have been necessary. Had the EU offered Ukraine long-term prospects of membership, the EU may have obtained an effective leverage for influencing Ukrainian politics and preventing Russia from filling the void. Instead, the EU offered the ENP Action Plan, tailored long before the Orange revolution – for the semi-authoritarian regime of Leonid Kuchma. If the EU deserves credit for the relative success in the Balkans, it should be also blamed – by the same token and to the same degree – for Ukraine’s failure.

Second, even though – as my diplomatic interlocutor shrewdly remarked – the Orange government was indeed not “exemplary” in terms of the rule of law, it was certainly much more vegetarian than its predacious successors. The very fact that the Orange government was preoccupied more with infighting than fighting the opposition makes it vastly preferable to today’s system, in which all branches of government are strongly concentrated in one, highly unscrupulous and authoritarian hand. To put it bluntly, the former president Viktor Yushchenko had neither the will nor the skill to monopolize power in the way that Yanukovych does, nor was he eager to use the security services to persecute his political opponents, to infringe upon media freedoms and the freedom of assembly, or to manipulate elections. And the former prime-minister Yulia Tymoshenko, though she might have both the will and skill, was barely able to do so either, since she was restrained by the president on the one hand and by the opposition on the other, which in most cases sided with the president to block all her initiatives.

Third, a dysfunctional democracy like Ukraine’s, a.k.a. “pluralism by default”, could have been fixed in two ways: either by the gradual elimination of dysfunctionality, i.e. the introduction of rule of law, or by elimination of pluralism and democracy, i.e. the consolidation of an autocratic rule. The latter is what has actually happened within a year-and-a-half of Yanukovych’s tenure. Europe’s politicians seem to have made a strategic mistake. So tired were they with the dysfunctional, chaotic Orange governance that they bought at face value the new president’s promise to introduce law and order and carry out reforms in a country heavily damaged by internecine political wars, global crisis and Russian subversions. The West established no red line for the tough guys from the Party of Regions, and the latter naturally perceived this as tacit acceptance of anything they did under the magic slogans of “order” and “reform”. What the West offered as benefit of the doubt, Yanukovych and his associates took as a carte blanche.

Within a year-and-a-half they have curtailed the civil liberties and political freedoms that were taken for granted under the Orange government. Censorship has been reintroduced, especially in television; the Security Service of Ukraine has been reassigned the traditional KGB job of surveillance and intimidation of political opponents; the tax service and tax police have been redeployed as the main tool of political pressure, especially on disloyal businesses; the disobedient Supreme Court has been emasculated and its power transferred to a dubious, government-manipulated body called the Supreme Council of Justice; local elections have been cancelled at a partisan whim and rescheduled for a later date (even though the Constitution strictly forbids this); a dubious gas-for-fleet agreement with Russia has been signed with multiple and outrageous procedural violations; the puppet Constitutional Court has once again been used to cancel the 2004 constitutional amendments that restrained the president’s sultan-like power… and so on and so forth.

Within this context, the large-scale employment of “selective justice” against the political opposition, in particular Yulia Tymoshenko and the most prominent members of her government, should not come as a surprise. Yanukovych and his associates are very consistent and coherent in their attempt to consolidate the regime, monopolize resources, and eliminate rivals perceived as a real threat. That Tymoshenko has received not only the maximum term of seven years imprisonment but three additional years of prohibition on holding public office signifies the incumbent’s desire to disqualify her not only from the 2015 but also from the 2020 presidential elections – when, having changed the constitution, Yanukuvych may either participate himself, or secure his future with a handpicked successor.

So why the fuss? Why has the EU reacted so angrily to Tymoshenko’s imprisonment and threatened the Ukrainian government with various sanctions, primarily with the shelving of the nearly-finalized Association Agreement between the EU and Ukraine?

From the EU’s point of view, Yanukovych has overstepped the mark. He ignored, in a rather arrogant way, all the signals. For Yanukovych, however, it was not so clear why this particular straw should have been the one to break the camel’s back. After all, the West has tacitly accepted much heavier breaches of the democratic code – starting with the 2010 parliamentary coup. Why should this line really be red, since it has never been clearly defined?

Most likely is that Yanukovych and his associates will continue their authoritarian drive, sentencing their opponents, falsifying elections and stepping up pressure on civil society and the remnants of independent business. They cannot change their policies since they barely understand what the alternative means, and even if some do, all their basic instincts are against playing by rules. They have managed their native Donbas this way for nearly twenty years and see no reason to give up the mafia methods that have brought them such success, power and wealth. They have little idea about the western world but know pretty well how Russia and other post-Soviet countries are ruled, and they may believe that this is the norm. All the talk about democracy and human rights are, as they see it, merely tricks devised by smart westerners to get an advantage over them.

The regime will probably try to keep the West in the game – either with bluff about a desire for “Euro-integration”, or with blackmail over Ukraine’s purported move into the Russian orbit, or with genuinely terrorist bargaining methods, offering to exchange Tymoshenko and other political hostages for concessions from the EU. But essentially they are not going to change their policies, behaviour and entire mentality. The sooner the West understands this the better. Tough measures against the Ukrainian regime may force some pragmatism within its ranks, especially among western oriented (and dependent) oligarchs, and persuade them to bet on alternative figures and parties in order to avoid further “Belarusization” and international isolation. They may support, at least tacitly, the efforts of civil society to bring about change in the 2012 parliamentary and 2015 presidential elections. These elections will hardly be fair (as the 2010 local elections manifestly proved), but they can still be relatively free and competitive.

If Yanukovych’s regime is not defeated in 2012 or 2015 the latest, it will consolidate into a full-fledged authoritarianism. After that, all elections in Ukraine will be a pure formality, as in Russia, Belarus and other post-Soviet sultanates. The EU has reacted too late to rescue Yulia Tymoshenko and her associates from humiliating imprisonment, but hopefully not too late to prevent the emergence of another dictatorship at its eastern borders.

When bridges turn out to be walls