Trump at mid-term: Bare knuckles from here on in

Despite Democrat gains in the mid-terms, the party is no closer to winning back the ‘silent majority’ that was once its core support. In the public sphere, divisions are becoming ever more entrenched. As things stand, Trump’s position remains secure, according to George Blecher.

During the 2016 campaign, Candidate Trump liked to say that he was the opposite of Obama – he never let his opponents know what he was going to do before he did it.

That this was one of the future President’s many inaccuracies was never more evident than in his press conference the day after the 2018 mid-term elections, in which Democrats regained, among other things, some 39 seats in the House of Representatives. If one listened past the President’s braggadocio – this time mixed with mafia language about failed Republican candidates who didn’t respond to his ‘embrace’ – he was actually quite clear about how he was going to act for the next two years.

He threw down a simple gauntlet: if the Democrats launch the investigations that they’ve been calling for since he came into office – including a demand that he release his tax returns – he’ll shut down the government. He mentioned the possibility in a passing remark, and then said: ‘If they do that [launch investigations], then … it’s a warlike posture.’ Muddled words maybe, but clear enough. 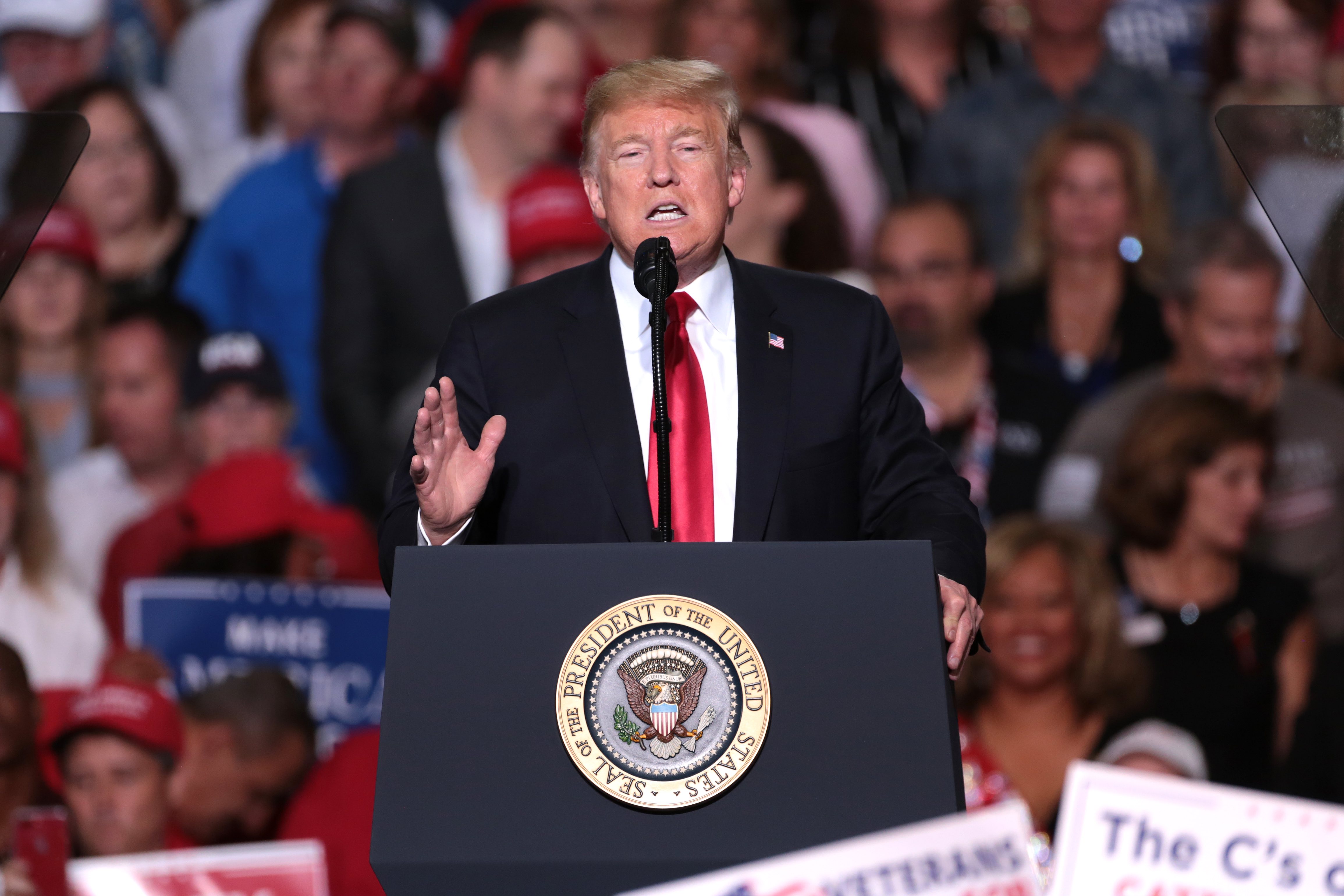 Government shutdowns are nothing new in the US. Since 1980, they’ve occurred nine times, the longest one lasting for three weeks. But the causes have always had to do with funding disagreements, not spite: it boggles the mind to think of a president refusing to pay thousands of federal employees their salaries just because the Congress has hurt his feelings.

But Trump wasn’t the only one at that press conference with a chip on his shoulder: reporters were salivating to get at him. An actual scuffle broke out between a young woman in charge of passing the hand mic around and a CNN reporter who insisted on getting in another question. The President wasn’t completely wrong when he called the reporter ‘rude’, but it was he himself who had created the adversarial atmosphere. It isn’t too much to say that Trump’s greatest achievement thus far has been to change the tenor of debate in the country, if not the world, from professed civility to confrontation and name-calling.

Chin out, sucking in air through his teeth, he presented his message to anyone who was willing to hear it: the gloves are off, and it’s bare knuckles from here on in. (The fact that he fired his Attorney General only hours after the press conference made his intentions even clearer.)

The American media are ready, even eager, to respond to his challenge. Though they’ve always seen their role as gadfly to the sitting government, these days they aren’t even pretending to be neutral. On the right, Fox News personalities made personal appearances at a Trump rally shortly before the elections, along with Rush Limbaugh, the nation’s most listened-to radio political commentator. The president’s son is dating an ex-Fox host. Trump recruited National Security advisor John Bolton directly from Fox. A Fox executive is reportedly under consideration as the next US Ambassador to the United Nations.

Left-leaning media have become equally partisan. The New Yorker is positively apocalyptic in its condemnation of Trump, comparing him to every evil dictator in history. The New York Times, once regarded as the most ‘objective’ newspaper in the US (Trump likes to call it the ‘failing New York Times’) occasionally seems to slip closer to the sensationalism of the schlockier media. A recently published, six page ‘exposé’ of the Trump family financial dealings revealed surprisingly little, and an op-ed page article by an unnamed White House official condemning the Trump presidency fell flat. It said nothing that hadn’t been said before, and within a few days nobody even seemed interested in tracking down the turncoat.

The ‘warlike posture’ will be front and centre in the Democratic Party’s 2019 agenda. After January 20, it will wield its new power with a new-found sense of revenge. Right now, Democrats are talking in vague, conciliatory terms about improving health care and crafting an infrastructure bill, but when they have control of the House we can expect Democrat-led committees to investigate anything and everything. It’s hard to imagine much getting done in Congress in the next two years: voices will be raised, heads will fly (even among the Democrats themselves, as in their fight over Nancy Pelosi’s long-time leadership), blame will be spread around… and the divisions between parties will grow even deeper.

The international arena may be where Trump’s contribution has been most profound, if not so obvious. But his confrontational style and preference for bilateral deals instead of groups of nations joining to find common ground have already had their effect. Despite Macron’s efforts to forge a Greater Europe, we seem to be re-entering a pre-WWII era of special-interest alliances – the most recent one between China and the Philippines – where nations favour short-term gains over long-term security, and where Trump’s theme song of ‘America First’ starts to be hummed by other nations, substituting of course their own country’s name.

But now that the smoke has cleared and all of the close races have been decided, how well did the Democrats do anyway? Not as well as they’d hoped, but perhaps as well as they deserved, given their inability to communicate with the 40 million plus Americans who voted for Trump in 2016.

From an identity-politics standpoint, they managed to get elected a sampling from many under-represented groups – women, LGTB, African and Asian Americans, Native Americans, Muslims. Though Republicans increased their majority by two in the Senate, due to the arcane rules of their chamber, virtually every controversial Senate bill requires a 3/5 majority, and the additional votes won’t take them very far. In the House, the Democrats will have a comfortable majority, but there is plenty of dissension within their ranks: some newly elected representatives ran to the left of their party, others to the right, the result being that they’re no closer to a cohesive vision of the future.

Given their substantial gains, the mood among Democrats is not that positive. They found the Trump faction more entrenched than they’d expected. They scored their greatest gains in the wealthier suburbs and seemed more distanced than ever from the lower-middle-class ‘silent majority’ that was once their core support. Though one of the possible Democratic presidential candidates, Senator Sherrod Brown from Ohio, has begun to talk about ‘the dignity of work’, it will take a lot more than a catch-phrase for them to convince Trump voters that the Democrats aren’t the closeted elite that the President has branded them to be.

Again, Trump’s emphasis on a ‘warlike posture’ – on winning rather than making policy – dominates the political arena.

A conversation that I had a few days after the election with a Moroccan-born Uber driver may shed a little light on how a Trump supporter thinks, and on the gap between a more socially-conscious vision of government and one based on winning and losing.

The driver was a handsome man in his forties who had won a green card to the US in a government lottery, and in his nine years in the country had started a family and a business and bought his own house. He was proud and grateful. From the beginning, he made it clear that he was a Trump supporter, and was eager to tell me why.

For one thing, he hated the King of Morocco for keeping the citizenry impoverished. In visits back to his home country, he saw his friends wasting away – smoking hash, having no decent jobs or hope for the future. He felt personally grateful to the president for rescuing him from the fate of his friends. In his opinion Trump was getting the better of the Saudis – ‘it doesn’t matter what he says, but he’s making money off them by selling them weapons and planes’ – and thereby thumbing his nose at other Arab monarchies.

The driver also liked that Trump always ‘did what he said he would do’ and credited him with improving the American economy. I pointed out that it was the Obama administration that had pulled the world out of an economic crisis, and that the unemployment figures had diminished steadily during the last years of his tenure. The driver smiled and nodded in a dignified way. He was willing to take in the information, even acknowledge its accuracy, but not let it affect his opinion. To him the president appeared to represent a wish, a stance, an attitude of bravery, canniness, defiance, self-assertion. This man’s pride was encapsulated in the president’s aggressive posture.

That is an elusive enemy to fight. Any denigration of that image – and throwing around facts and figures may be perceived as part of an arsenal of weapons that tries to do just that – will be taken personally. What’s really odd is that, to many Americans, the president, the most powerful man in government, doesn’t represent government but its antithesis, the proud individual standing on his own. To demonstrate to – and convince – a large part of that 40 million bloc of people that government actually represents their interests will require more than improved healthcare, repaved highways, and a slogan about ‘the dignity of work’.