Tito between legend and thriller

A museum to Tito at his one-time summer residence glorifying the Yugoslav dictator is in stark contrast to a damning new biography, finds Slavenka Drakulic. Yet between the two extremes is an absence of objective history-writing in the former Yugoslavia.

When I imagine paradise on earth, it is as a small, deserted island surrounded by turquoise blue sea, with pine trees and pebble beaches. Exactly like the one I saw the other day, while travelling on a boat towards the Brijuni archipelago in the northern Adriatic near Pula.

Josip Broz Tito must have had the very same idea when he visited the islands for the first time in 1947. However, the difference was that for him, this paradise on earth became reality. Soon afterwards, the late president of the former Yugoslavia moved to a newly built residence in Vanga, one of fourteen islands. After him, no one else had a chance to nurture the same dream. Ordinary mortals could no longer even visit the islands. It is said that the surveillance was so strict that even the fishing village of Fazana, on the mainland directly across from the archipelago, was populated solely by secret policemen and their families. 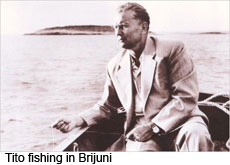 After Tito’s death in 1980, the Brijuni archipelago was proclaimed a national park. On my visit that day I learned that over the thirty or so years that Tito enjoyed the privilege of living there, he often managed to spend up to four months a year in Vanga and Veli Brijun, which he loved the most. I could find out all about his life in Brijuni in a photographic exhibition from 1984 on the first floor of the local museum. There, in hundreds of sepia coloured photos, I saw him in his role as head of state with his important visitors, as well as in his private moments. I could also see that, during his stay in paradise, Tito not only relaxed. He spent his holidays working – as the head of state, chairman of the communist party and commander of the military. At the same time he played host to political leaders from Fidel Castro to Queen Elisabeth, Indira Gandhi to Willy Brandt, Leonid Brezhnev to the Persian tsar Reza Pahlavi – and many, many others. Stars fascinated Tito, and many popular personalities, from opera singers like Mario del Monaco, to Valentina Tereskova, the first woman in space, were invited to Brijuni too. But he enjoyed visits by film stars the most – Elizabeth Taylor and Sofia Loren, to mention just two.

While a foreign visitor would probably find this exhibition bizarre, for me it was a trip back to my childhood. Seeing a photo of Tito harvesting tangerines in his orchard, for example, I remembered our teacher telling us that he always sent these tangerines to orphanages – he was such a goodhearted person, she would add. We kids could only try to imagine how heavenly these fruits tasted, as there were none to buy in Yugoslavia at the time.

But it would not escape the notice of any visitor that this exhibition is a glorification of the “biggest son of our nations and nationalities ” – as Tito was once called.

On the ground floor of the museum there is another exhibition, a very strange one. It is dedicated to – Tito’s animals. It was the fashion at the time for visiting statesmen to bring presents, often wild, exotic animals that could not adapt to the local climate and soon died. They would then get stuffed and exhibited. So, while upstairs you can see Tito playing with a baby orang-utan, downstairs you can see the stuffed corpse of the wretched beast. While upstairs he is photographed caressing a young leopard, on the floor below the visitor can see the same leopard staring at him with his glass eyes. Although it probably wasn’t intended, the stuffed animals exhibited in the same museum create an awkward, morbid contrast to the glorification going on upstairs, almost turning the museum into a metaphor for Tito’s rule.

The 25-year-old photographic exhibition of Tito’s life and work in Brijuni is only a small contribution to the personality cult that Yugoslavians built and nourished so successfully for so long, with notoriously tragic consequences.

But there is another approach besides glorification that sporadically comes to the surface. Recently, in both Belgrade and Zagreb, a new book about Tito appeared that tries to prove that this historical person, however important, was – to put it mildly – not unblemished. Tito: A Phenomenon of the Century is written by the Belgrade journalist Pero Simic, who has studied Tito’s personality for decades. Simic has also written a book about the compromising documents about Tito he found in the Stalin archive in Moscow. This recent book about Tito, however, is a kind of “all-you-ever-wanted-to-know-about-Tito-but-never-dared-ask” publication. In other words, Simic, reveals to the reader secrets and half-secrets about Tito’s life. The text consists almost entirely of quotations. He quotes private as well as official sources (there is a long list at the end of the book) and does not comment or interpret much. Tito’s life is a mystery, it seems. Not even his birth date is certain: Simic found 15 different ones. The same goes for Tito’s name and the name of his father. Facts about his education are equally problematic: it is not quite clear what kind of school he went to, or whether he completed his schooling. It is not known where exactly he worked, or for how long… and so on.

In Simic’s book, documents from Tito’s time spent in Moscow as a Komintern cadre are published for the first time. Apparently, he gained promotion by informing on his comrades, many of whom ended up being executed. His rise to the top of the communist party in Yugoslavia seems to be highly suspicious too, according to Simic. From the very beginning till the end of his political career, Tito was not only a manipulator and liar but a traitor, guilty of ordering the murders of his close collaborators and even friends – as well as mass executions of war prisoners in Bleiburg after WWII. Tito appears as an ambitious, ruthless man not shy to commit criminal acts – the closest parallel probably being a Mafia don.

Obviously, the aim of Simic’s book is to discredit Tito as a person, and thus his political decisions and projects. However, since the book is based on quotations, it is very difficult for an ordinary reader to judge how truthful Simic’s arguments are. Their reliability depends on the reliability of his sources, which can be verified and judged only by specialists, i.e. historians. Most other readers will only be able to read the book as a thriller.

I visited Brijuni with a journalist, a foreign correspondent from the former Yugoslavia. While touring the Veli Brijun island and its museum, we debated the exhibition and the book, as the two extreme approaches to Tito. My journalist friend asked me why I though that, after more than a thousands books written about Tito, there is not one meticulously researched, reliable biography of him. It is an excellent question to which there are many answers, though none are very convincing. For one, there has been no time to write it, because the country fell apart in several wars. Another is that the attitude towards the past in the Balkans is rather problematic in general. But – my friend insisted – perhaps now, thirty years after his death, the time has come for a serious biography that could be used by historians? I could not agree more. We often hear that “there is too much history in the Balkans”. This is indeed true, but only in the sense of historical events, not history as a discipline. Tito is just one example of how, in the former Yugoslavia, we still have too many myths and too much ideology instead of facts, of history. Tito deserves to be approached seriously. We owe this to him as an historical personality – and even more to ourselves.

While we were waiting on the mainland for a boat to take us over to Brijuni that afternoon, Stipe Mesic, the Croatian president, together with a few bodyguards disembarked at the tiny port in Fazana. The handful of tourists and locals standing at the pier waiting for a boat did not even react to his presence as the president walked along the waterfront to his car. My companion was impressed with his easy-going manner. Obviously, times have changed – unlike our attitude to history, which we still perceive as a mixture of legends and crime stories.

The day of our visit was a perfect summer’s day. Before we left, I wanted to take a swim in a stunning bay with ruins of a roman villa from the first century AD and a temple to Aphrodite. Legend has it that if you swim right under the temple, you will find perfect love. But I did not take a swim. I was afraid. One should not ask too much of life, I thought. What a strange idea on the island where, once upon a time, one man just snapped his fingers and got it all. It is a sad fact that exactly thirty years since he departed from Brijuni for the last time, on 29 August 1979, it remains to be seen who Tito really was.

Between poetry and politics

On the sociology of money

Twentieth-century social sciences tended to leave monetary questions to economists, but in recent years there has been an explosion in the sociological research of money. ‘Mittelweg 36’ offers perspectives.

Creating feminism in the shadow of male heroes

The widespread fear from the label of radical feminism has blurred the interpretation of pre-1989 women’s movements. A generational clash further complicates the process of remembrance. The superficiality of post-feminism and gender mainstreaming threatens to erase the struggles of yet another feminist generation.