Back in May 2022, when southern Ukrainian cities were already occupied but not yet annexed, the Russians resorted to an old trick and started issuing passports. If the locals were insufficiently eager to embrace Russian citizenship, the occupiers tried to motivate them with threats and intimidation.

One of the makeshift facilities issuing Russian passports in Melitopol was adorned with the pastiche of a classic Soviet WWII propaganda poster. The original showed a Red Army soldier bayoneting a rat-like Hitler, whose nose stuck out through a torn Molotov-Ribbentrop Pact. The slogan stated, ‘We inflict defeat upon the enemy and annihilate him!’

The version prominently exhibited in the Russian passport office depicted the same soldier, but this time bullying a very different enemy. The Führer had been replaced by a fat, ill-shaven historian, busy scrawling a manuscript entitled Historia, for some obscure reason written in Latin. Behind the unlucky chronicler, who was doomed to be shot by a Russian firing-squad, stood a man in military uniform with a smiling mask in his hands. This figure was clearly meant to be the harbinger of historical revisionism; but the risible skills of the artist left one wondering if he symbolized American imperialism, NATO militarism or Ukrainian nationalism. This time, the slogan was: ‘We forbid the rewriting of our history!’

The idea of history as holy writ that can neither be revised nor even interpreted has for some time been a fundamental component of the new Putinist ideology. Its foundation stone was the cult of Soviet victory in WWII, which rapidly turned into a political religion. It came as no great surprise that Putin’s ideologues seized on it and developed it. Soviet history in its unadulterated form was of little use for modern purposes, limited as it was to the war against the Nazis and to post-war space exploration. So the Putinist ideologues give a contemporary spin to the victory so dearly bought with the lives of countless Soviet people.

They ruthlessly nationalized the narrative to make it exclusively Russian, airbrushing out unpleasant details such as the 1939 division of Poland and the postwar occupation of central and eastern Europe. The Victory Day military parade became the main festive event of the year. Banners proclaiming ‘We can do it again!’ became popular among Russian car owners, and a plywood copy of the Reichstag was erected on the outskirts of Moscow for the annual reenactment of its storming.

The new cult, nicknamed Pobedobesie (‘victory madness’), required state support. In 2009, President Medvedev established the Presidential Commission of the Russian Federation to Counter Attempts to Falsify History to the Detriment of Russia’s Interests. The task of this body was to ‘defend Russia against falsifiers of history and those who would deny the Soviet contribution to the victory in World War Two’. The commission was short-lived and ceased to exist after Putin’s reelection as president in 2012. By 2021, denying the Soviet role in the victory and comparing the Soviet Union to Nazi Germany had been criminalized. Violations became punishable by severe fines.

The common belief among Russian intellectuals that Putin’s weaponization of history would be limited by facts proved naive. In August 2021, officials of the Investigative Committee of Russia interrogated the director of a college in Novosibirsk because of critical remarks he had made about Alexander Nevsky, a medieval prince canonized by the Russian Orthodox Church. The case showed that any doubts about the greatness of Russia’s past would soon become crimes against the state.

Putin himself is an amateur historian, his actions proving how dangerous such a passion can be. His insipid treatise ‘On the Historical Unity of Russians and Ukrainians’, a sorry collage of rusty stereotypes and outdated propaganda banalities penned less than half a year before the invasion, cast doubt on Ukraine’s very existence as a legitimate nation. Bizarre though Putin’s article seemed, it was an essential indicator of the prevailing political climate and clearly heralded the forthcoming war. 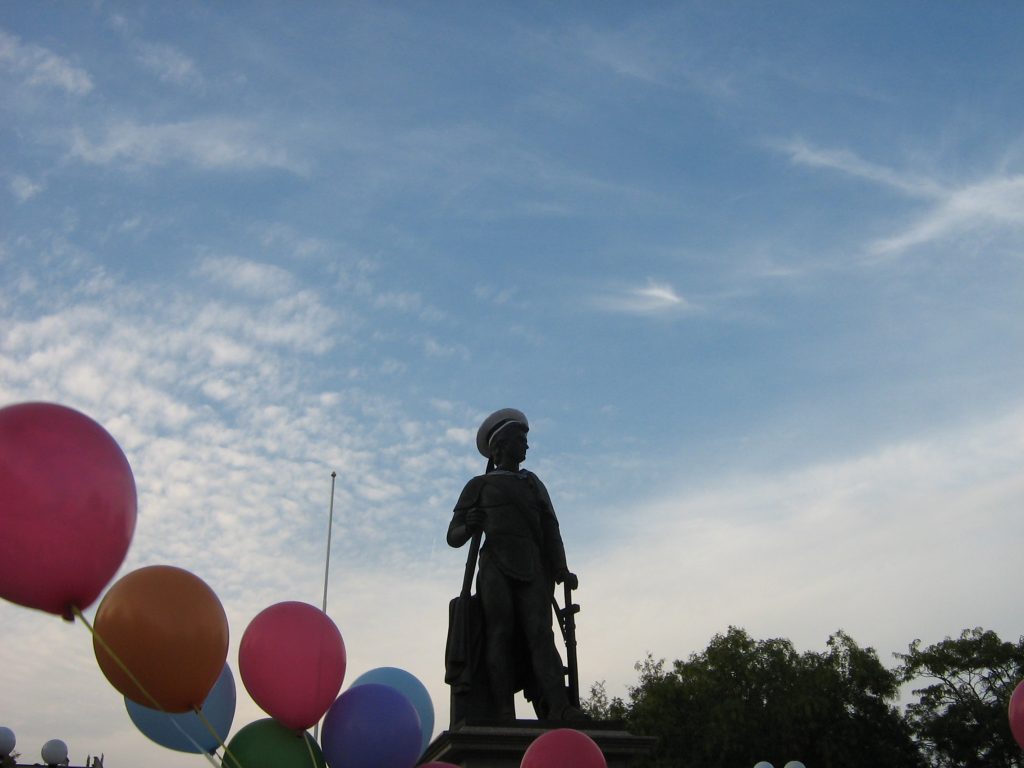 Monument to Potemkin in Kherson. It was removed from its pedestal in October 2022, along with Potemkin’s remains. Image: Katrin Chubukova. Source: Wikimedia Commons

If the war against Ukraine can reasonably be interpreted as a ‘history war’, then the Russian occupation of Kherson provides perfect material for a supporting case study. Immediately after Kherson fell, billboards depicting figures from Russian history who had visited the city in the distant past mushroomed around the town centre. Here was Alexander Pushkin, the famous poet; there was Denis Davidov, hero of the Napoleonic Wars; and who was that but Generalissimo Alexander Suvorov, military leader in the days of Catherine the Great and Paul I? The text on Pushkin’s billboard naturally failed to mention the fact that the poet had visited the city after being exiled from the imperial capital. This was a bit like Italy claiming the town of Ovidiopol in the Odesa region because Ovid had been exiled there by Augustus.

At the beginning of the Russian occupation, the most common slogan on the streets of Kherson was, ‘We will stay here forever!’ By May, as the Ukrainian counter-offensive gathered momentum, the mood had changed dramatically. Russia secretly started removing the most valuable exhibits held by Kherson’s museums. On 30 September, Putin annexed the Kherson region and on 19 October declared martial law, effectively legalizing the looting of the city. The occupiers dismantled and removed Soviet monuments to Russian imperial heroes such as Suvorov and Admiral Fyodor Ushakov. The same fate awaited the memorial to Prince Grigori Potemkin, though in this case the theft was not restricted to his statue. Potemkin’s remains, interred in St Catherine’s Cathedral, were exhumed and also spirited away.

This was by no means the first time the dead prince had been disturbed. Paul I, son of Catherine the Great, had ordered Potemkin’s mummified body to be removed from the cathedral crypt, where it had been prominently on display. In 1874, his remains were put in a new lead coffin and interred beneath a tombstone set in the cathedral floor. In 1930, when the cathedral was transformed into an anti-religious museum, Potemkin’s remains were again exhumed and pressed into service. His skull was placed in one vitrines, his bones in another, with a third being reserved for the half-decomposed remains of his clothing. Labeled ‘The Remains of Prince Potemkin, lover of Catherine the Great’, this grisly installation was dismantled only after complaints from Boris Lavrenev, an influential Stalinist writer who visited the museum in the early 1930s.

Allegedly, the bones were re-buried following Lavrenev’s intervention. But whether or not the extant remains are genuine or complete is something of a mystery. For a start, the prince’s skull had disappeared; according to one local legend children had used it to play football in the cathedral yard. According to another, the skull had been stolen by a collector of macabre souvenirs. Finally, in 1984, Potemkin’s remains were exhumed again and researched by a commission that included expert forensic pathologists. The most they could conclude was that the bones found in the grave belonged to a large man and could be dated to the end of the eighteenth century.

In the Putinist view of history, Potemkin is important as the conqueror of Crimea. However, he is perhaps more widely known as the unwitting originator of the phrase, a ‘Potemkin village’. The prince had famously made elaborate efforts to impress his mistress, Catherine II. One of these was the construction of a series of prefabricated ‘settlements’ on the banks of the Dnipro, that could be hastily put in place before the empress’s visit and then quickly dismantled. Putin’s version of Russian history has much in common with this ludicrous scheme, an instance of theatrical set-dressing devoid of any true substance.

During this pointless and craven failure of a war, the weaponization of history has become no less urgent than the purchase of Iranian drones. To complete the construction of its own ‘Potemkin Village’, the Putinist administration has introduced a new statutory discipline for all institutes of higher education in Russia. It will be called ‘The Foundation of Russian Statehood’. The two central elements of this new catechism will be the history of Russia and the history of its culture, trumpeted in a version none will dare rewrite for fear of brutal reprisal.