Protests at the end of 2012 in Slovenia caught the attention of international newspapers. Boris Vezjak asks what the goal of this “uprising” – suddenly a universally popular concept – is, and whether it might represent more than merely an isolated incident.

In the late autumn of 2012, Slovenia awoke and people began to rise up, much to the surprise of everyone: activists and stay-at-homes, politicians and civil society, intellectuals and workers, vigilant citizens and passive masses. The events also aroused the interest and curiosity of neighbouring countries, and Slovenia merited a mention in international newspapers, which is not exactly a frequent occurrence. What is the goal of this “uprising”, this suddenly universally popular concept? Is it just an isolated incident?

The uprising to which I refer is simultaneously one and many. The wave of protests in Maribor against mayor Franc Kangler is undeniably a development which triggered a wave of similar events. But seen in retrospect it is merely a fleeting excuse for something immeasurably greater that goes well beyond the discontent of local citizens. The mass demonstrations throughout the whole of the country which followed, with unanticipated speed and different intensities in very different places, are all an expression of a general mood of the people, such that we can reasonably refer to a certain unity in the people’s will. This sense of unity and common purpose is currently pervasive among most ordinary people, affecting and rousing to action even the most detached and indifferent citizen. 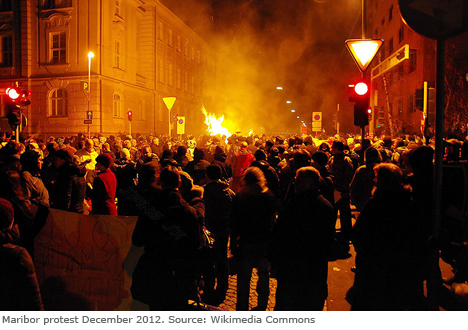 Where does this sense of emergency, due to which many are suddenly feeling called on to participate or at least pay attention, come from? It is a unique and rarely repeatable situation, the historic nature of which we are not yet fully aware – there is a sense that something exceptional is occurring, namely the very uprising itself, that leads us to believe that the zeitgeist we are now witnessing is an elusive moment that is difficult to capture. Precisely because we cannot capture things in the context of the fixed idea of the “here and now”, we sense conclusively that the moment is a historic one, and for this very reason perhaps we should be present.

Yet the wave of protests arose against a trivial backdrop. The motives behind it were similarly trivial: the masses were infuriated when the mayor of Maribor tried to impose a radar system to catch and fine speeders, among them perhaps the penniless and hungry. More than 20,000 people were issued with speeding tickets in only two weeks – in a city of 100,000 inhabitants. There was a sense that residents’ household budgets were being targeted. This sparked an undeniable element of vandalism: speed cameras were secretly set on fire at night, and the perpetrators of such acts enjoyed the quiet solidarity of most citizens, strengthening the collective belief that these speed cameras represented an assault on the city, initiated by a mayor already compromised by dozens of criminal charges. To top it off, the contract for the installation of the speed cameras was perceived as highly suspect. All this was sufficient to set off a mass outcry in the conviction that Kangler’s looting of the wallets of the city’s inhabitants had gone too far. But this leeching of taxpayer money had been occurring much earlier and on many occasions, even as city residents remained silent. Then, in May 2011, Kangler was arrested and detained in under suspicion of having committed 15 different criminal offences. The real question has never been why people are resisting but, rather, why it took so long for them to rise up.

Their revolt made use of tools other than those that revolutionaries have used traditionally: anonymous writers on Facebook took on and carried out the roles of organizers and agitators in a very witty and skilful manner. They displayed a perfect understanding of crowd psychology. Although even today we still don’t know who they are, the streets of Maribor came alive, and more and more people began to pour onto them in a snowball effect: each successive protest saw a doubling in numbers, as though citizens had finally come to realize that they were in possession of a previously well hidden or even invisible power. They vented their anger in a series of actions, some of which were violent. They demanded and achieved the resignation of the mayor, who acknowledged no loss of credibility. Instead he portrayed his departure as being for the good of the city and claimed to be the victim of a left-wing conspiracy.

But Kangler had left it too late: even before achieving their goal, the protests had spread like wildfire to a number of other cities and their basic agenda elaborated upon: to the explicitly anti-mayor stance were added social and economic demands, and a broad resistance to political elites was exhibited. Indeed, references to these elites are the most frequent feature of attempts to describe the nature of the ongoing protests. However, many perceive the protests as a struggle for social justice and equality, and against poverty and unemployment. In opposing the interests of capital and corrupt cliques, the uprisings should be understood primarily as a political act. While they may also be considered to echo developments around Europe, they differ from protests that have erupted in Greece and Spain against successive rounds of austerity measures and the violations of human rights that proceed from them. For such measures have not been taken in Slovenia and its the protests remain above all a political struggle against the elites and the government.

The fascinating, historical nature of the moment stems from the rarely seen manifestation of spontaneous democracy on the part of the people – it may be that we haven’t seen this in such a clear and passionate form in Slovenia since the plebiscite moments of independence. The lively rumbling of discontent has revealed the political nature of the uprisings – in addition to demanding the resignation of elites, they are reclaiming the political power of the people at a time when local and national authorities have become estranged from the public. And loss of confidence in the authorities has taken its toll. Political engagement here is interpreted as being fundamental to democracy: for this very reason we like to describe the current circumstances using the categories of direct democracy, and look to Iceland as our model.

As I write this (and the unpredictability of the moment, subject to its historic nature, demands reference to it), the protest movements are still at a crossroads of multiple possible directions. They may die out, leaving nothing more than a pleasant memory. A new, perhaps calculated, satisfaction with the status quo, rooted in a fear of a break with the political circumstances that we have been slavishly accustomed to up until now, concerns me: this may undermine full commitment to the protest movements. At the same time, we are justifiably fearful that the productive simmering will fail to find a common denominator, and that initiatives will remain fragmented. Or that the efforts will be wasted and the impetus lost without having established new political subjectivities and conditions. And this is the crux of the matter: to demonstrate to what degree citizens can themselves advance alternative concepts and projects into the political sphere. If they cannot and do not know how to do this, then the targeted elites will keep their seats and grow stronger than ever.

The fundamental dilemma of myriad protests, all in some way or another manifestations of a single uprising, lies in the search for legitimacy: so long as actors are dispersed and individual, they do not have much power. Only when they are united in their program and visions can they have an constructive impact. At the same time, achieving this critical mass is not easy, since the various forms of direct democracy give way to a plurality of demands and actions. But there is an additional difficulty. After the initial Maribor movement, triggered by anonymous authors on Facebook, there appeared in the city quite a few groups who seemed to think they had won legitimacy by generating new political paradigms. However, these groups had merely assumed the role of organizers whose identities we do not even know. And they were therefore unable to confer legitimacy upon others. In a way it was inevitable that existing groups would resort to taking the credit for the movement and that, in this way, new antagonisms would enter onto the stage. Thus the current question is not only by whom and in what way an alternative may be offered but also how to base it on consensus and widespread support. Something that will be not only an alternative to this government and political elite, but also to the social and economic system. When a people wants to change its politics, it is certainly not purely for political reasons alone.