The double threat to Ukrainian democracy

Five years after the revolution at Maidan, Ukraine faces a very limited choice: either giving in to Russian aggression or tolerating domestic corruption. Martial law was recently imposed after Russia blocked the Azov Sea, yet official reasons for the state of emergency seem to disguise political power play.

In November 2013 Ukraine was just about to sign an association agreement with the EU – a much aspired step to open up the country’s institutions – and borders – towards Europe, expected to boost economy and investments. After short deliberations (and a meeting with Vladimir Putin), then president Viktor Yanukovych decided to step back from the Association process. A few days later, he ordered a brutal crackdown on a student protest rallying against his decision in the heart of Kyiv. The next morning tens of thousands of people flooded the streets. Young and old, poor and rich, conservative and liberal: outraged by police violence, disdain of human dignity, oligarchs, corruption. Even if only for a short time, the red lines were clear: Ukrainians demanded a rule of law and justice, dignity and equality. And a new government. In three months’ time almost a hundred of protesters were killed by riot police, the president would flee the country, and Russia would attack Ukraine, occupying Crimea and Donbass.

Maidan as a civil movement, through the strong experience of solidarity and quick mobilization, created a window of opportunity for young, educated, active, motivated people, citizens with morals. Some have since earned seats in the Parliament, ministries or newly created bodies like the patrol police or the anti-corruption bureau. Some have consulted the government or toured the world with a diplomatic mission: to tell the global West, which didn’t seem to care, about the war in the middle of Europe. Millions have volunteered for and donated to the army. In fact, volunteers and the armed forces have become the two institutions Ukrainians trust most, with the Church taking the first place. 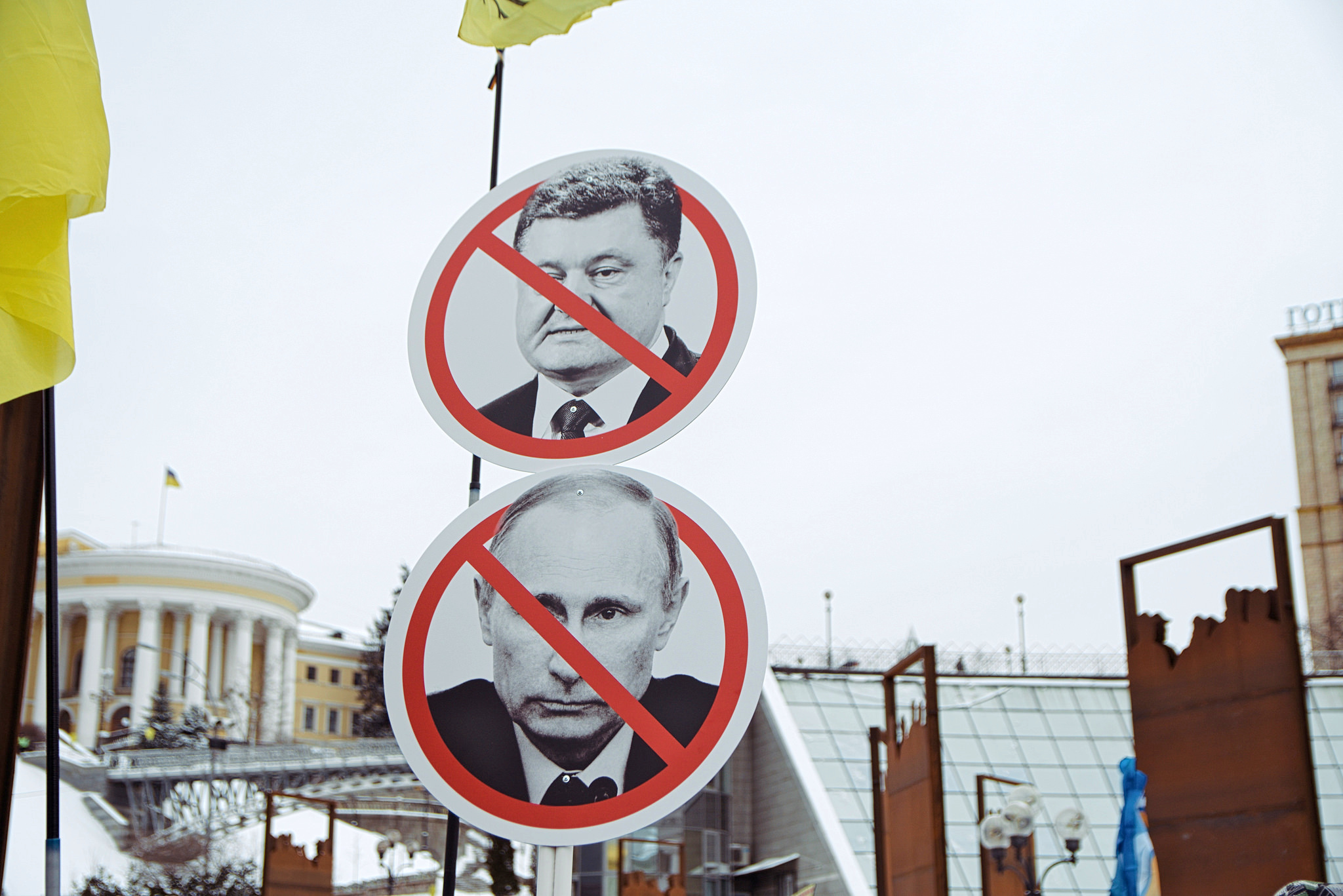 Five years later, there is another front

Unlike five years ago, many now strongly believe that Ukraine’s civil society should support the government, because of the Russian threat. According to this narrative, any criticism may weaken the state and play to the tune of the Kremlin. Is this what we should expect during a war – mobilization in the face of a justified fear? Or is it because many opinion leaders have started to identify with the government, because they worked a lot through these five years to make the state work, instead of letting it fail?

I keep asking these questions because I face them each day. I run a newsroom of a small public broadcaster, Hromadske, founded by independent journalists in November 2013. Our first live broadcasts coincided with the beginning of protests: yes, we televised the revolution. Over the past five years, we have strongly believed that we need to keep our eyes open and red lines clear: we reported not only on Russian aggression and lives on the occupied territories, but whenever there were violations from the side of the Ukrainian government and the army. Hromadske, as well as other independent media, mostly investigators, were frequently called unpatriotic, harmful, biased against the government for reporting on their violations. We have been threatened and cyberbullied, even sued by a neo-Nazi group for calling it such. The group in question is famous for enforcing ‘justice’ in situations where the state doesn’t seem eager to act. With the lack of political will to enforce law and justice through the existing institutions, this is exactly how you get popular.

Has the freedom of speech deteriorated in Ukraine since the Revolution? No. But the environment has become significantly different. Never before, probably since 1991, has Ukrainian media faced such a limited a choice: security or liberty? With Russia on your doorstep (or inside your house already), security is not just a vague concept, but a vital set of rules. But the truth is that after five years of a de facto war, we still don’t know them.

As Russia openly attacked Ukrainian ships in the Kerch Strait on the 25th of November, taking 24 sailors captive, there was no need to convince Ukrainians that it was an act of open aggression. But when it came to introducing martial law, many questions remained unanswered. For instance: if what the government says is true, and nothing changes with the introduction of martial law, then how exactly does it enhance Ukraine’s defence capacity? The authorities said there will be no additional mobilization, no limits to the liberties, no curfew, neither cancelling of the presidential elections which are due in March, unless Russia starts a ground operation against Ukraine. The law was introduced in ten regions neighbouring Russia – not nationwide. But even so, it does stipulate most of the measures mentioned above. For instance, local (not presidential) elections in 46 out of 125 territorial communities were already cancelled by the Central Election Commission – it did not wait until Russia made another move.1 These elections are scheduled for the 23rd December, but will only run in the regions where martial law wasn’t introduced, and elections in the other ten regions will be rescheduled by the parliament in January 2019. This will be the first time Ukrainians have elected heads of the territorial communities in the framework of the reform on decentralization. It gives local communities more instruments to control their local budgets and set their own priorities in spending. But with the delay, ten regions will have to restart the electoral process from scratch and may potentially lose on their local budgets.

It is also hypocritical to make democratic processes dependent on further Russian moves. Putin had already made his moves, and Ukraine has already had to find legal and military solutions to defend itself, without declaring war or imposing martial law. So why do that now? ‘Everybody keep calm, nothing is changing’ – this is what the refrain of the president and the local authorities. But if there is no substantial legal and military ground, shouldn’t there be a political one? According to the latest polls, Poroshenko doesn’t make it to the run-off vote. He has not announced running officially, but his motto ‘Army! Language! Faith!’ is all around the city on billboards and TV ads. Imposing martial law for thirty days may not seem to buy him much time. But it brings the military agenda back into focus, on a different scale than earlier. And, also, there is only one commander-in-chief to take decisions. ‘I am the president, I don’t have competitors’ Poroshenko said during his latest press conference when asked why he doesn’t like mentioning the names of his competitors in the presidential race.2 The event was organized one day after Ukraine created a unified Orthodox Church, independent from the Russian Orthodox Church. This historical step was Poroshenko’s diplomatic victory, something no other Ukrainian president could do before. But his constant presence at the clerics summit and a long speech on stage in front of thousands of people and the head of the newly-created church gave a sense of campaigning rather than celebrating.

But let us get back to the issue of the military. I have to stress once again that the danger is indeed present. Russia de facto blocks the Azov sea, a massive Russian build-up is reported along the border with 80 thousand Russian troops in and around Ukraine, and the nature of the martial law is limiting exactly those liberties which would help mobilize the state in case of attack. If it were true that nothing is changing and no liberties were de facto limited, then what would be the use of such a drastic measure, other than for political gain? This very argument is widely used by the Kremlin as well. It falls perfectly into the general narrative that all Ukraine’s troubles are nothing but a political struggle; as if there were no war, no IDPs, no occupation, no prisoners, no ongoing human rights violations on the occupied territories. But that is the Kremlin. We are living in Ukraine. And political power games cannot dictate the way we treat our liberties. If we do agree to certain limits of liberties – as martial law stipulates limiting several articles of the constitution, including basic liberties like freedom of assembly, speech, movement and others – we need to understand what those limits are exactly, how long they will be in place and, most importantly, how exactly it would help provide security.

Ukrainians have chosen democracy and freedom over and over again, paying the highest price for it: their own lives. After five years of war with an aggressor on one frontline and corruption on the other, I wonder whether it will change Ukraine’s red lines. What will Ukraine choose now: security or liberty?