A 30-hour train journey from Vienna to Moscow offers the chance to connect with the Russian past: contraband, bribery and all. Alexei Korolyov returns to the place of his birth.

A few months ago, I was feeling adventurous and decided to go from Vienna to my native Moscow by train, along one of the few remaining cross-continent rail routes. It wasn’t because I’m backward-looking or aerophobic. It was because I was convinced that I might be the only passenger on board.

Why else endure 30-odd hours amid strange smells and clonking metal, and at two or three times the price of an air fare? Have your passport and ticket taken off you, leaving you with no identity? Watch time change slowly, unwillingly from Central European to Moscow Time as the train chugs and trundles away from a recognisably capitalist landscape in former Austria-Hungary through communist decay in Belarus and western Russia to its final destination – faux Moscow prosperity? Why let yourself be humiliated by disapproving border officials as they throw open your suitcase and dig unceremoniously inside? ‘What’s this?’ ‘Who’s that for, your mom?’ ‘How much alcohol are you carrying?’ ‘How much cash?’

I never expected to have company. But when I boarded the Russian Railways train at Vienna’s Hauptbahnhof after briefly stating my business to a characteristically sulky Russian conductor standing guard at the door, I knew I had badly miscalculated. The train was crammed full. 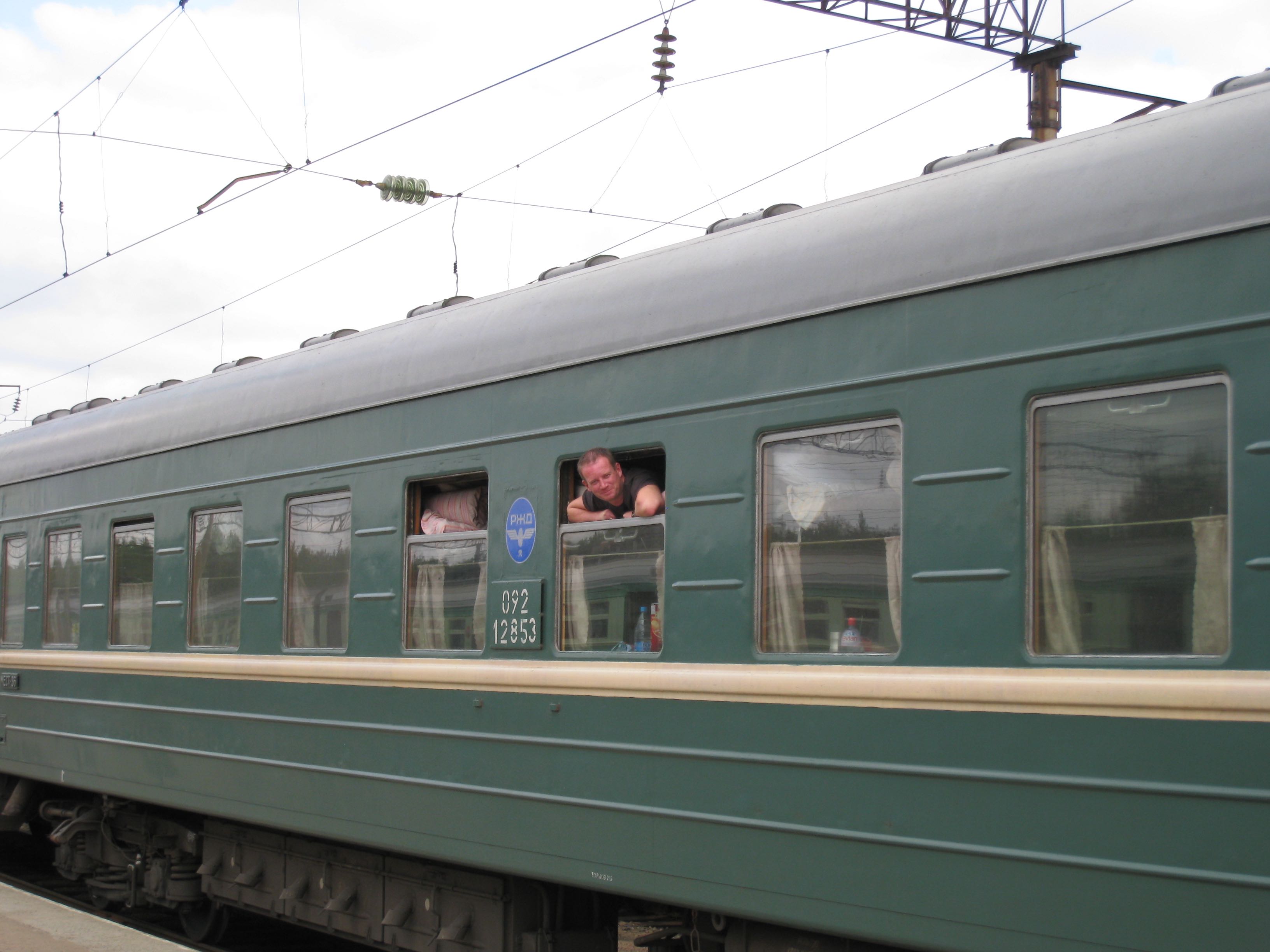 In my compartment there were three other people, two men and a woman, married to one of them (I never figured out which one). When I came in, they had already spread their ample dinner on a small bedside table (wherever did they get boiled eggs?). They were co-workers and spent most of the time complaining about someone or other in their department. They were all officers at the interior ministry of the Crimea, going back home via Moscow after European holidays.

My entrance clearly alarmed them; they didn’t know at first in which language to address me, and for a few shameful seconds I thought I should tell them I was British or Austrian and spare all of us the difficult conversation that would follow if they found out we shared a language. But I took the hard road. They might see my passport, and I had already spoken Russian to the conductor. So I told them, as monosyllabically as I could, my name and function. Predictably, they weren’t satisfied and demanded, with typical Russian bluntness, my views on Vladimir Putin, Donald Trump and Angela Merkel, as well as Europe’s refugee crisis and the eurozone troubles. They were also curious about my salary, sexual orientation and religious beliefs. As we talked (or rather as they tried to persuade me that I was wrong on every count), we kept coming back to one persistent point: why didn’t I agree that it was because of western sanctions that their pay cheques never rose above a measly 380 euros a month, and the cost of living kept rising uncontrollably? Oh no, I agreed. It was just that the sanctions were Russia’s own doing. Whatever my neighbours felt about the Russian takeover of the Crimea in 2014, economically speaking this was disastrous for everybody concerned. When it was predictably punished with economic measures by the US and most of the EU, that was not because the West was looking for an excuse to reduce the Russian people to penury. It was the Kremlin asking for trouble, and getting it. Its own counter-sanctions banning the import of European agricultural produce added to the economic and administrative chaos. When, again predictably, the Kremlin manifestly forgot all about the Crimea two years later and the national headlines – and budget – switched to the military operation in Syria, and then to meddling in foreign elections, the Crimeans were left stranded. Most Russian banks, including the country’s biggest lender, Sberbank, have said they cannot operate on the territory because of the sanctions regime, while the construction of a bridge linking it with the Russian mainland has been dogged by delays and corruption allegations.

I too had questions for my fellow travellers: how did they each afford a round-trip of at least 550 euros on their salary? And why choose Europe, a place they claimed was ‘naturally hostile’ to Russia? The answer to the former I could deduce: the police and Russian Railways both being state organisations, my neighbours enjoyed a state discount on rail tickets (and they made maximum use of it: their whole trip was by train).

This could also be seen in the relaxed and proprietorial way with which they behaved around the compartment, and from the immediate friendship they seemed to have struck up with the conductor. The four of them were members of the same species, sharing the same ideals. The second question was clearly less easy to answer, but after a hushed internal discussion one of the men produced his bag and unzipped it with a conspiratorial smile – it was full of expensive alcohol bottles, chocolate, newly bought clothes and household items. ‘you just can’t get that sort of stuff in the motherland!’

In the meantime, the train chugged on, first through Austria, then Poland, then Belarus, where it made a stop for passport and customs control (Belarus and Russia have no functioning border, so checks take place in Brest, on the Poland-Belarus border) and the changing of wheels – an elaborate and costly procedure during which the train is shunted into a siding, lifted up and has its wheel sets swapped to fit the wider track gauge used across the former Soviet Union. All the while the conductor and his assistant could be heard talking about international politics (strongly pro-Trump) and the details of a contraband scheme. This consisted of bringing Austrian fur coats to their buddy at Belarusian customs, who would give some to his wife and her friends and sell the rest at twice the original price. When this official impatiently told my neighbours that their luggage far exceeded the allowed quota of alcohol, they simply gave him a couple of bottles and that was the end of it. Like the quality of the restaurant car food, moral standards deteriorated the closer we got to Moscow.

This was my first time arriving in Russia from western Europe by train, and when the train pulled up at Moscow’s Belorusskiy railway station I felt almost like the revolutionaries that had flocked to a fragmenting empire from their European exile a hundred years ago, especially considering the political debates I had been having with my neighbours all this time. This feeling quickly went away: as I was leaving the compartment, the Crimeans sincerely wished me well and warm-heartedly implored me to see the error of my ways. The woman even cried a little, I think.

On my return trip to Vienna, the train was almost empty, just as I had wished, but I was glad that I still had company. It was a garrulous woman in her mid-sixties, also a Crimean – not a Russian or Ukrainian but a Tatar. She was on her way to Hungary, where she lived with her son, a former officer with Russia’s Federal Security Service (FSB). She had been sorting out her son’s divorce in Moscow (‘It’s getting ugly: she wants his flat!’), and before that she’d been to Crimea to try and sell their family land: despite the Kremlin’s promises, she said, Crimean Tatars were still unwelcome in their ancestral territory. In fact, her son and she were cutting off all ties to Russia (‘They never treated us well, the bloody racists’) in order to live in their new home in a quiet Hungarian backwater which they had built with FSB money acquired through bribery (‘You’d do it too if you had the chance, believe me. Steal while they let you!’).

When the same fur-dealing customs official came in to check our luggage, my companion suddenly turned pale and told him she had a confession to make. What is it, he asked. She had sewn 4,000 euros into her shirt. Would he take it from her, she asked. He did not. ‘Keep your money, old wench, but are you carrying any alcohol?’