‘Vagant’ fears for the forest: with articles on the crowded biome; a Californian season in hell; tree death in the Harz; and terraforming Copenhagen.

In Vagant, Tore Engelsen Espedal reviews the political, cultural and moral context of ‘The Forest’, the new issue’s lead topic: ‘The invisible networks, the dead and rotting debris that carpet the forest floor, sustain new growth and values worth fighting for.’

But the biome is receiving rather too much human attention: ‘The forests are crowded, crawling not only with trees, plants, animals and insects but also with scientists, bureaucrats, activists, tourists, artists, poets, ravers, timber harvesters and fire-fighting crews.’ Over-exploitation and climate change are degrading the world’s forests at the same time as the sweetness of woodlands is embraced in myth, poetry, music and philosophy. 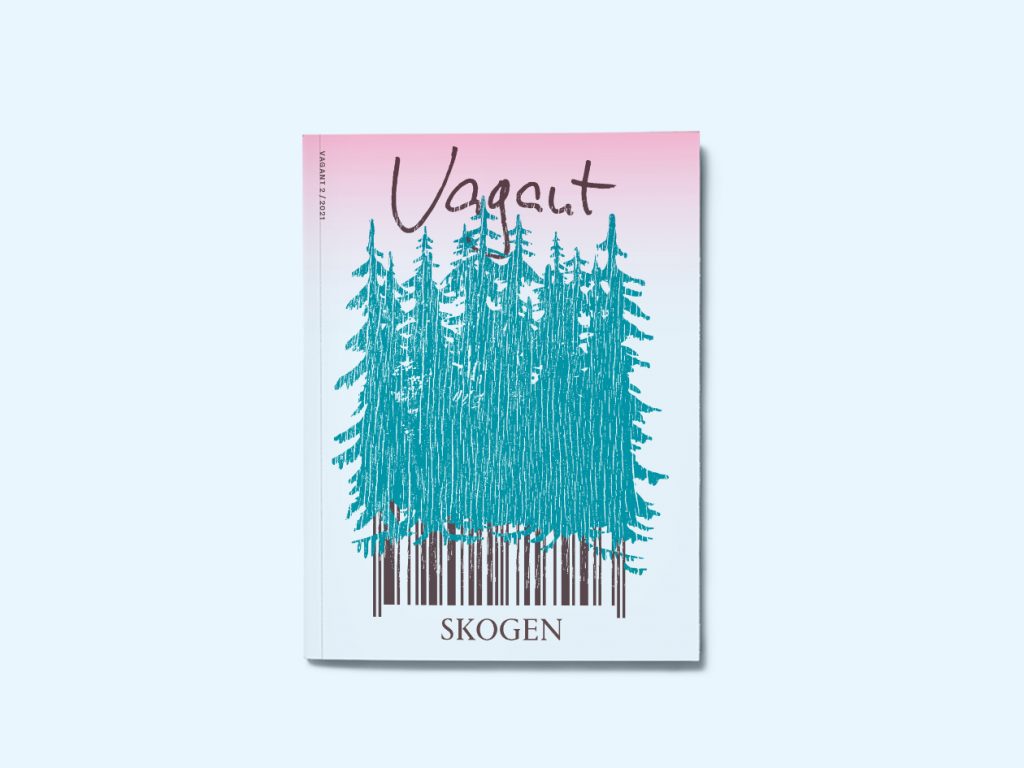 A season in hell

The Norwegian writer Anders Dunker is based in Pasadena, California, where summer is ‘the wildfire season’. Hot, smoke-laden winds scatter ash over his idyllic garden and the wooded local hills are scarred by fires. He examines a satellite image of the American west coast for escape routes:

Terrified, I realized that the belt of fires and stinking smoke covered the coast all the way to Canada … an updated inland map was covered with the little flame icons, so closely packed there were scarcely any gaps between them.

This is Rimbaud’s ‘saison en enfer’. Dunker tells the story of Aldous Huxley’s burning California house, discusses Naomi Klein’s 2020 book On Fire: The (Burning) Case for a Green New Deal and Stephen J. Pyne’s The Pyrocene: How We Created an Age of Fire and What Happens Next (2021). ‘Humankind has made creative devastation its credo’, Dunker comments.

Literary critic Mats O. Svensson sets out to explore the Harz National Park in central Germany, still a wilderness. Its current 25,000 hectares were once part of the vast, now decimated Germanic ur-forest.

Throughout the last three centuries, the Harz range has remained a magnet for poets and painters. Once his guide has left him, Svensson follows the ‘Goethe-path’ into the hills, thinking about Hölderlin and Friedrich, but also about the bitter reality of today’s dying trees. ‘Waldsterben is back in Europe, no longer due to acid rain but to drought and spruce bark beetle.’ His guide had explained: ‘Now, journalists visit the Harz reserve to get honest insights into tree death and any partial forest recovery. Commercial forestry has problem trees cleared out of sight … the timber is shipped off to China because the German market is satiated.’

Svensson wanders among doomed ‘Giacometti trees’ listening to ‘their uncanny swaying, like rocking chairs possessed by evil spirits’. There is some hope: ‘Old mono-cultures die but diverse new woods have more resistance. But if climate warming exceeds two degrees, falling ground water levels will mean the trees can no longer adjust … a couple of million people live in the Harz valleys and after a year of drought the reservoirs are already half-empty.’

The writer and climate activist Andrea Pontoppidan is intrigued by the potential for recovery of another environmental asset ruined by human activity: the Copenhagen ‘soil depot’, which contains millions of tons of poisoned soil. ‘When time has removed the contamination – but where does it go? – all of it will become an artificial island across the North Harbour mouth. Lynetteholmen is a response to extreme demand for homes in the capital. Here, soil is both a waste product and a scarce commodity.’

Exploring the island in the making, Pontoppidan is reminded of Ursula Le Guin’s The Word for World is Forest: ‘Seen from the outside, Earth is a bare world, its forests, animals and plants lost. Terraforming is the repair process, but it depends on colonizing and plundering the resources of the fertile planet Athshe.’ But even among the desert-like areas of dead soil, some detoxification must have taken place: ‘A world of plants has suddenly appeared. Plantain, wild chamomile, and carrot, many other umbelliferous herbs. I stare at them full of wonder. So large, they strut their stuff … how am I to read their signals?’