Leaked communications are revealing how power works like never before; revelations of political deal-making beyond the public view make assumptions about democratization look like wishful thinking, writes Ciril Oberstar.

When Edgar Allan Poe published his third detective story The Purloined Letter in the 1940s, no one could have imagined that stolen letters would ever play as important a role in democracies as the royal letter in the French monarchy. The reason is simple: in a democratic society, secrets such as those about the royal couple have lost their political power. Their place, it is assumed, has been taken by informed public debate, by transparency in the legislative process, and by public scrutiny of the authorities. However, old habits only reluctantly take their leave from the political arena, and even when they do, it is only in order to prepare for the next coup d’état.

It appears that government in the twenty-first century has rekindled a long exhausted genre of power – epistolary government, which has been in decline at least since the epistolary novel began to lose its popularity. Thus, a few years ago, Wikileaks created a truly global detective story based on stolen letters, which in keeping with the genre soon delivered surprising twists. Instead of the criminals, the person who ended up being jailed was the one who blew the whistle: the messenger was accused of rape and became a fugitive; supposedly neutral financial intermediaries turned out to be government agents. 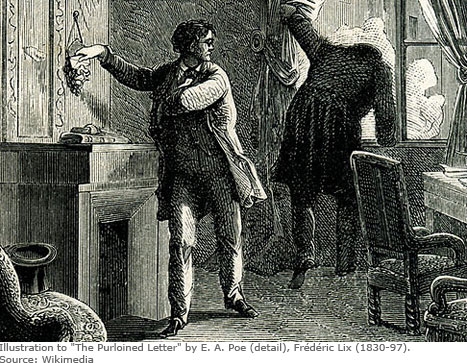 Not long ago, the public was again hit by leaked private and semi-private letters. Just the same sort as the letter from Poe’s story. A special feature of these letters is that, in some paradoxical way, they reveal the family secrets not only of the elected but also the financial rulers.

The first epistolary disclosure concerns the financial sector. Confidential letters among derivatives traders revealed the unpleasant secrets of a large family of the most important global banks, in particular Barclays. Barclays found itself at the centre of attention as a result of its manipulation of the data serving as the basis for the London Interbank Offered Rate (LIBOR). The LIBOR reflects the conditions under which banks loan money to one another. The value of all financial transactions, which are in one way or another tied to the LIBOR, is estimated at approximately 650 billion euros. However, the LIBOR is not determined based on actual data regarding the interest rate at which banks take out loans, but on banks’ daily estimates of the interest rates at which they can borrow from other banks on that particular day. Based on these estimates, which representatives of individual member banks of the BBA (British Bankers’ Association) must provide every day by 11 am, the agency Thomson Reuters calculates the benchmark interest rate.

Methods for determining LIBOR prohibit the interests of derivatives traders being taken into account, yet email communications among employees of Barclays Bank demonstrated just that. One of the email exchanges involves the following message sent by a derivatives trader to a co-worker responsible for providing an estimate of the interbank interest rate to LIBOR: “If it’s not too late low 1m[onth] and 3m[onth] would be nice, but please feel free to say ‘no’ […] Coffees will be coming your way either way, just to say thank you for your help in the past few weeks.” Another trader on a different occasion gave thanks for a similar favour in a more pompous manner: “I owe you big time! Come over one day after work and I’m opening a bottle of Bollinger.”

Such email exchanges were quite common among bankers between 2005 and 2009, the time covered by an investigation undertaken by British and American bank regulators. During certain periods, derivatives traders requested that the interbank interest rate be manipulated at least three times a day. The British regulatory agency FSA fined Barclays Bank 59.5 million pounds. The fine would have been higher had Barclays not agreed to pay it immediately, thereby qualifying for a 30 per cent discount. Although Barclays was not the only bank to manipulate the LIBOR, it was the only one in the international family of banks against whom regulators have so far taken action. But the crucial disclosure in all this is not so much the chummy way in which business was conducted within and among banks, but rather that the manipulation of one of the most important financial standards in the EU is not classified as a crime. The law making the manipulation of interest rates punishable was adopted by the European Parliament only recently.

The second epistolary disclosure concerns the extended European family (to use a once prevalent expression from European political discourse, which disappeared from the lexicon with the onset of the eurocrisis). In September, an unofficial letter from the IMF, EU and ECB troika appeared on the website pastebin.com, which guarantees anonymity of postings. It was addressed to the Greek Ministry of Labour. The leaked letter begins with an unusual ultimatum, evidently a response to expressions of increasing working class dissatisfaction on the streets of Greece, and the ever louder social demands for a new round of negotiations: “There should be no backtracking on recently passed labour market reforms. The mission welcomes social dialogue as a means to consult with social partners […]. The labour reforms introduced in March […] need to be preserved well beyond the present round of social dialogue.”

While everywhere else in Europe it was believed that social dialogue, regardless of its formal status, was a negotiation between equal partners, the troika considered it important to stress the merely consultative nature of the dialogue. It appears that the letter was, in fact, directed not at the Greek government or Greek workers, but at the Greek welfare state. Among other things, we can find in the letter the prescription of measures for increasing the flexibility of labour legislation: “Increase the number of maximum workdays to 6 days per week for all sectors”; “set the minimum daily rest to 11 hours”; “eliminate restrictions on minimum/maximum time between morning and afternoon shifts.” Since the dictate of the troika, with its demand for a six-day work week and a 13-hour work day, came to Greece during a time of extremely high unemployment (24 per cent, among young people as high as 50 per cent), it is worth recalling other radical measures proposed by economists in the past to reduce unemployment and get the economy moving. A year after the outbreak of the Great Depression, Keynes proposed that the working week be gradually reduced to 15 hours and in this way achieve a redistribution of working time, which due to increased productivity and technological progress was being steadily reduced. Similarly, in 2010 the British New Economics Foundation proposed solving structural unemployment by means of the gradual introduction of a 21-hour work week.

The demands of the troika go in the opposite direction, but are no less extreme. One might be forgiven for thinking that the letters were sent to Greece by a European capital interested in creating favourable conditions for the creation of profits at the periphery. And that the proverbial, over-bureaucratized EU, IMF and ECB are perhaps not quite as apolitical as they seem.

Should we be concerned that no private letters containing the dirty secrets of political or financial authorities have leaked into the public in Slovenia recently? In principle, yes; however, Slovenian political rulers seem to have no problem leaking their family secrets themselves, through the new communication tools of blogs and tweets. Hence, one can find out more about the government’s plans for the construction of “parallel educational, staffing and communications infrastructure” by reading a blog post offering the personal opinion of the head of the Directorate for Higher Education and Science. What is surprising is not so much the content revealed, which can already be observed in political developments (the founding of a new university and new television station), but rather the nonchalance with which the director gave away the current coalition’s secret.

If, in previous eras, political rulers meddled in the work of public enterprises and services, nowadays, we can expect structural changes in the relationships between the political, the public and the private. It should not be overlooked that the university being founded is private and that the new television station, which judging by its staff is highly political, is being formed as part of a private company, even though for the time being the state has majority ownership. Thus, a new marriage of capital and politics is taking shape, so that opportunities for the discovery and the exposure of genuine letters containing family secrets will not be in short supply.