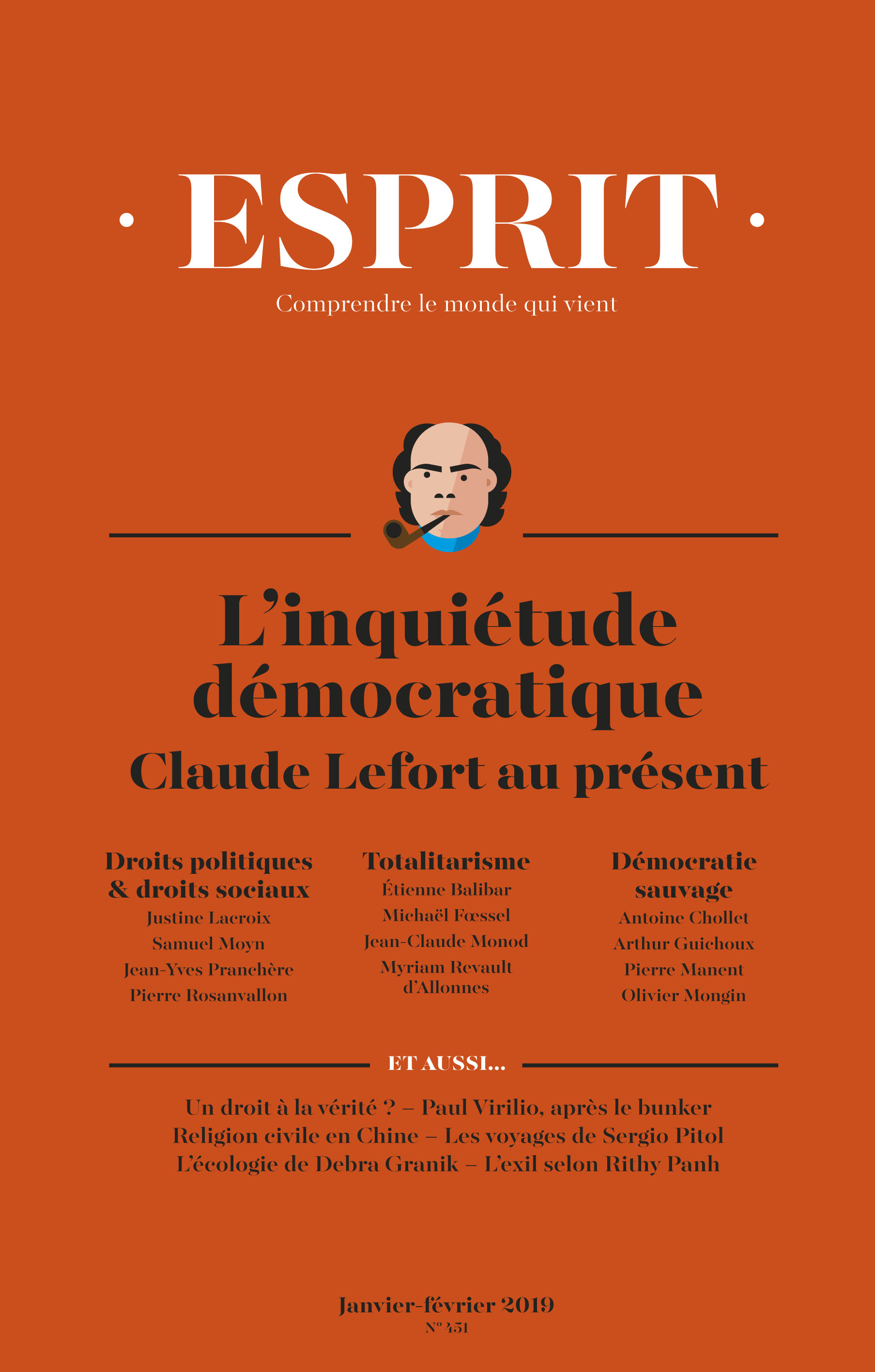 Claude Lefort (1924–2010) was one of the most important French political philosophers of the second half of the twentieth century, part of a group that includes Raymond Aron, Francois Furet and a rising generation of thinkers (Marcel Gauchet, Pierre Manent, Bernard Manin) who were to revolutionize how we think about democracy. Yet he remains little known to the public.Esprit has decided to change that by publishing a groundbreaking special issue dedicated to Lefort, entitled ‘L’inquiétude démocratique’.

Totalitarianism: Lefort’s most important idea was to define democracy as an ‘empty space’. Before the French Revolution, power was incarnated directly in the body of the King: l’Etat c’est moi, as Louis XIV famously put it. But now that the King’s head has been chopped off, no one can claim to fully incarnate the ‘people’. The desire to do so – whether Stalin or Hitler – is in fact a totalitarian one, and in doing so Lefort pointed out that totalitarianism is not a separate regime but a pathology of democracy itself. The same might be said of populism today, as Pierre Rosanvallon, professor at the Collège de France, explains in interview. Populists claim to truly incarnate the people, and fall into the same trap of wanting to occupy that ‘empty space’.

Human rights: Lefort also made a key intervention in debates surrounding human rights in the 1970s, as Samuel Moyn writes. Lefort criticized the ‘moralizing’ view of the ‘new philosophers’ such as Bernard-Henri Lévy, who took human rights to be abstract pre-political rights that should be used to measure how oppressive different regimes are. Instead, Lefort argued that rights are part of a political project of the constitution of society.

Untamed democracy: As Antoine Chollet points out, human rights are part of what Lefort called ‘démocratie sauvage’, which might be translated as ‘untamed democracy’. With his friend Cornelius Castoriadis, Lefort directed a review called Socialism or Barbarism, which worried about the bureaucratic threats to democracy. The Hungarian Uprising of 1956 led them to ask whether democracy and communism where compatible. Lefort separated the bourgeois, tamed and ‘institutional’ aspect of democracy from its ‘untamed’ aspect, in which there is a continual and unpredictable struggle to defend and expand human rights. With Trump in the White House and Brexit in Europe, that call to reclaiming politics seems as relevant now as it was then. 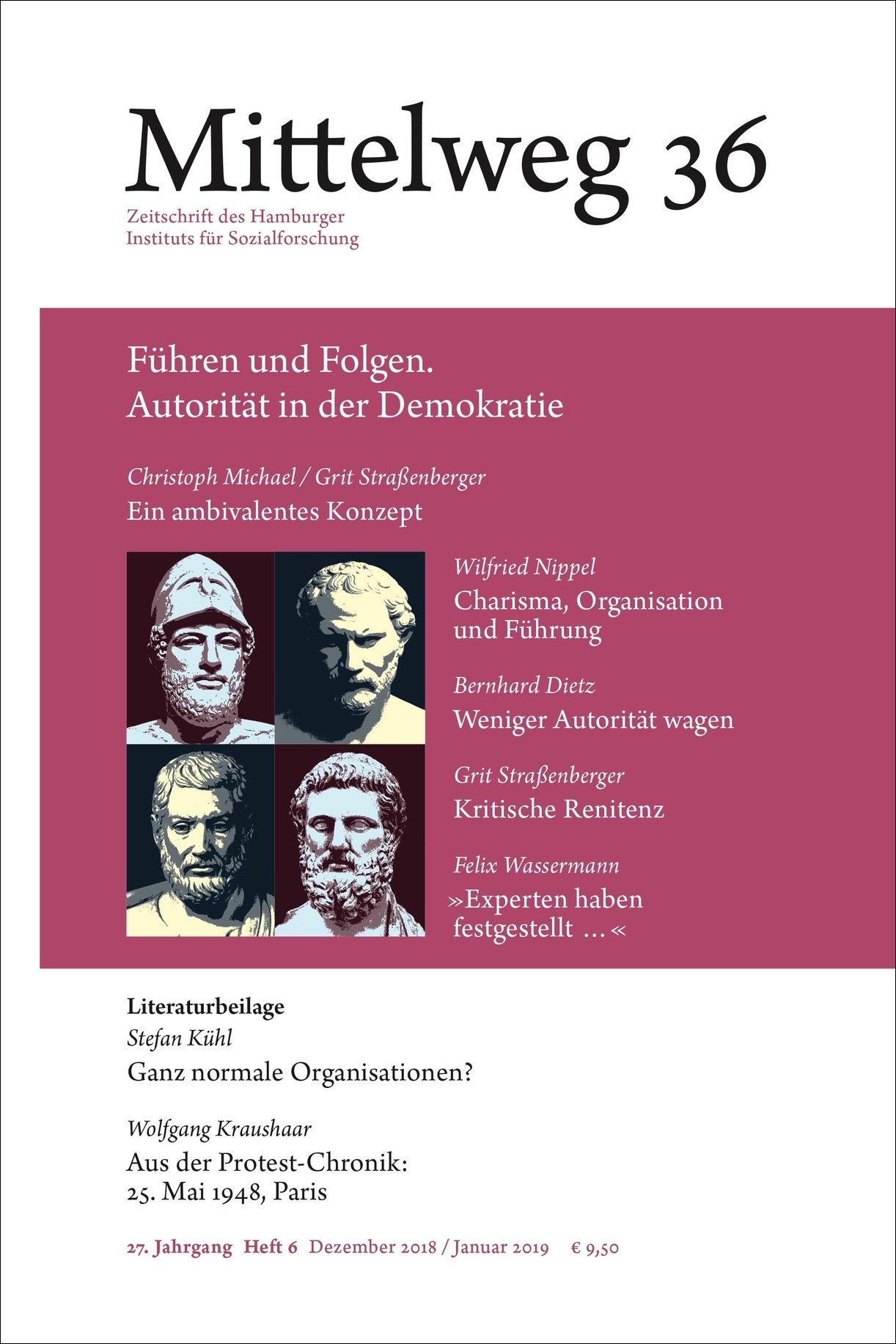 In Crowds and Power, Elias Canetti famously used the figure of the conductor to illustrate the difference between ruler and leader: while, for the orchestra, the conductor is a Herrscher who commands his orchestra, for the audience he is a charismatic Führer invested with authority. Introducing the current issue of Mittelweg 36, editors Christoph Michael and Grit Straßenberger pick up on Canetti’s metaphor as the basis for a discussion of the ambiguities of authority and political leadership.

In German politics, with its centripetalism and conflict aversion, authority becomes centred on charismatic leaders. When this charisma fails, ‘the danger arises that the authority of the liberal democratic order itself is fundamentally questioned’. While populist-left anti-authoritarianism overlooks the function of institutions in enabling pluralism, rightwing populism sees pluralism as the dilution of the ‘will of the people’ that is better articulated in authoritarian form. The confusion of authority and authoritarianism by both left and right is an ‘important reason for why liberal democracies and the theory of political liberalism has so little with which to counter the populist critique’.

1968: The argument that the anti-authoritarian individualism of the ’68ers spawned a ‘new spirit of capitalism’ is only partly accurate, argues historian Bernhard Dietz. As was pointed out at the time, the management jargon of the 1970s, with its motivational psychology and talk of the human being as ‘resource’, sought to re-legitimize the economic system without challenging capitalism as such. However, the shift in management culture began at least a decade earlier. For example, a study published by the sociologist Heinz Hartmann in 1959, criticizing German management culture as paternalistic, elitist and irrational, was on the mark when it came to heavy industry, but overlooked processes of de-hierarchization and scientization already underway in other sectors.

Epistemic authority: The authority of experts is not a problem for democracy as long as it is institutionally coupled with processes of popular deliberation, argues Felix Wassermann. New, mixed forms of consultation and deliberation can ‘contribute to making democracy viable in the future – and perhaps to making it resistant to populist, anti-consultative attacks’.

Also: Grit Straßenberger offers a theory of ‘dissenting republicanism’ as antidote to the repressive tendencies in models of radical democracy; and historian Wilfried Nippel recalls the social-democratic demagoguery of Ferdinand Lassalle. 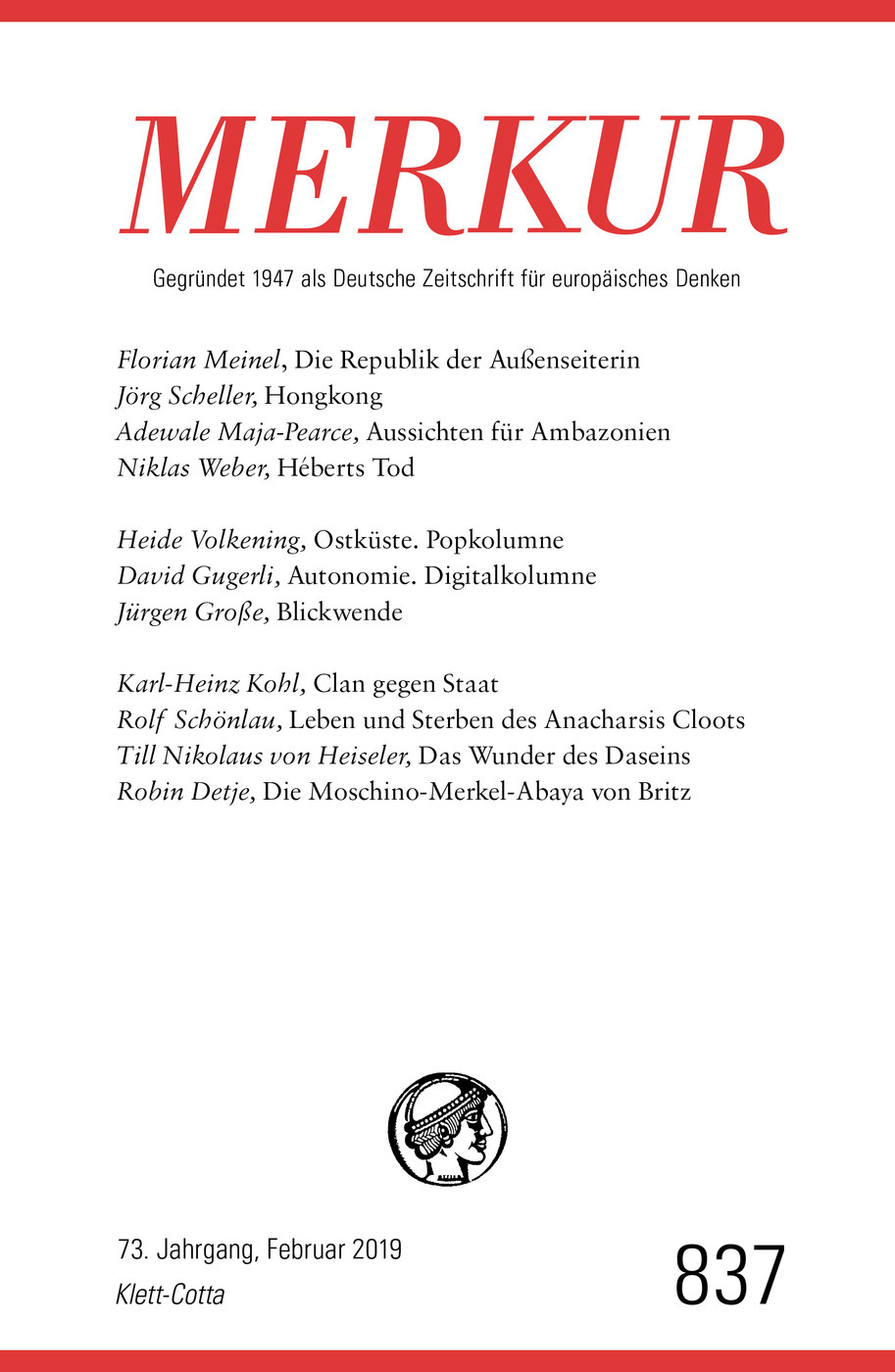 Criticisms of Angela Merkel’s ‘undemocratic’ style of governing could fill volumes. Precisely what that means, however, is often unclear, writes constitutional jurist Florian Meinel in Merkur. For some, the problem lies in Merkel’s technocratic style, while for others it is her autocratic and erratic decision-making, be it on nuclear ‘exit’, the eurozone, gay marriage or, most controversially, border controls.

Common to both criticisms is concern at the weakening role of parliament. This, argues Meinel, has to do with the emergence of the grand coalition as sole form of viable government and, with it, the absence of an opposition that can credibly be called a ‘government in waiting’. Yet there is little will in Germany to consider constitutional reform, a tendency that goes back to the failure to rewrite the Basic Law after reunification. More reprehensible still: there has been no resistance from parliament itself to Merkel’s undermining of the powers of ministries. If this development persists, fears Meinel, German politics may be plunged back into something resembling the Bismarck era.

Autonomy and computers: The development of the computer has consistently been linked to the question of autonomy, according to historian of technology David Gugerli. From the computerized bureaucracies of the 1950s and 1960s, with their time-sharing systems and regulated access to the mainframe, to the decentralized, local-area networks of the 1970s and the development of the personal computer, progress in computer history has always meant re-definition of the autonomy of users.

Today, with machine learning and artificial intelligence, the question of autonomy is posed anew. ‘Like all its predecessors, algorithmic self-programming will lead to huge changes,’ writes Gugerli. However, in historical comparison, autonomy is neither increasing nor decreasing. Rather, the problem of autonomy ‘offers a zone of negotiation over how digital societies understand themselves, how they describe themselves and how they call themselves to account.’ 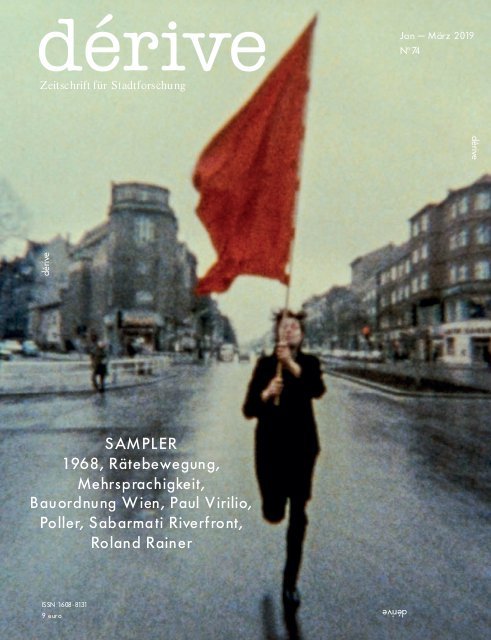 The urban roots of the ’68 movement tend to be overlooked, writes Klaus Ronneberger in dérive. The Parisian revolt was in large part sparked by students’ dissatisfaction with the technocratic planning policy of the French government, and specifically the suburbanization of cultural and intellectual life at the newly-built University of Nanterre. The sociologist Henri Lefebvre, one of the first to theorize the student movement from an urbanist perspective, argued that this lent its call for ‘urbanity’ a utopian quality. Significantly, then, May ’68 began in the suburbs.

As Ronnerger shows, the movement was predated by a variety of protest movements rooted in the city. His survey starts with the Lettrists of the 1950s – pioneers of the subversive urbanist techniques of détournement(misappropriation) and dérive (roaming) – and takes in the Munich youth protests of the early ’60s, sparked by the arrest of teenaged folk singers for disturbance of the peace, and the ‘Gammler’, the refuseniks whose unkempt appearance and public alcoholism so infuriated the German bourgeoisie. Then there were the Provos in Amsterdam, with their white bicycles and slogan of ‘economically useless creation’, and the Aktion Roter Punkt across Germany, which protested against the cost of regional public transport and car-centred planning policy.

After 1968, protest politics continued to have a strong urban element. The unrest in Italy’s industrial north during the ‘hot summer’ of 1969 was triggered by migrant workers’ discontent with substandard living conditions and many residents refused to pay rent and electricity bills in solidarity with them. The squatters movement in Berlin, Hamburg and Frankfurt radicalized in the early 1970s in protest against real-estate speculation in West German metropoles; later in the decade, it took an ecological and communitarian-autarchic turn. Today’s ‘right to the city’ movement brings this history into the present, writes Ronneberger. Although its slogan sounds more defensive than it did fifty years ago, when Lefebvre coined it, ‘we need to bear in mind that the social-political balance of power has significantly altered. Currently, neoliberals and rightwingers are attempting to dismantle the achievements of the ’68ers.’

Also: Peter Haumer on the Austrian workers’ councils in 1918; Banu Citlak, Sebastian Kurtenbach and Haci-Halil Uslucan on attitudes to multilingualism in the public spaces of the Ruhr; Robin Klengel on image politics and slum clearances in Ahmedabad; and Peter Payer on the history and significance of the security bollard in Berlin and Kreuzberg. 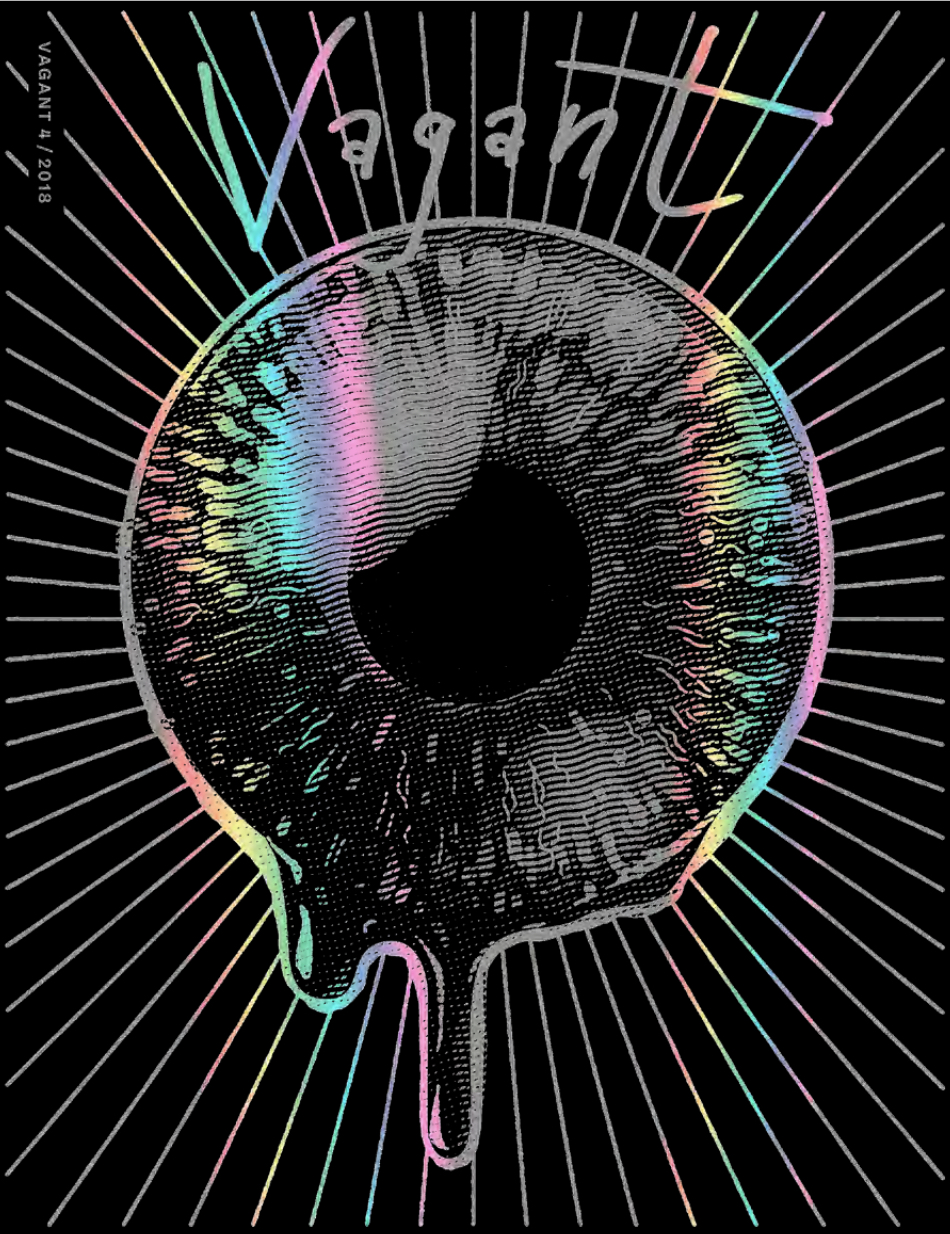 In an issue of Vagant focusing on writers and writing, Per-Arne Bodin discusses the resurgent ‘alternative version’ of Russian history and the contributions by influential Russian academics, politicians and writers to the idea of an ethno-nationalist (i.e. Slav) empire. Bodin writes: ‘Worldwide, experts on Russian affairs employ an astonishing variety of concepts from [political and] cultural studies to analyse current developments … [aware that] the territorial loss associated with the fall of the Soviet Union is not only a matter for foreign and security policy, but has become integral to the mindset of opinion formers and writers.’ Bodin reviews Russian fiction on the subject and also two recent, critical studies, both by Norwegian writers: Jardar Østbø’s The New Third Rome: Readings of a Russian Nationalist Myth, and Kåre Johan Mjør’sRussiske imperium.

Migrants and us: Jonas Eika scrutinizes recent Danish literature for signs of recognition that the reception of migrants is hostile as a matter of policy. ‘The introduction of stricter asylum controls in Denmark, and Europe generally, points towards the creation of political systems in which, by definition, it is legitimate to rob any migrant from the south of their most basic rights, with death as a potential outcome.’ Poetry and fiction shows sympathy but, Eika finds, the sensibilities of Danish natives dominate. The narrative poem ‘Bag bakkerne, kysten’ (‘Behind the hills, the coast’) by Peter-Clement Woetmann almost finds the right balance: ‘Woetmann is safely rooted in a Danish landscape when writing about dead and damaged migrants, but doesn’t allow his privileged position to overshadow the suffering of others.’

Melancholia: Reviews of works by the leading writers Kristine Næss and Per Petterson emphasize their pervasive sadness. About Næss: ‘Crying is a constant feature; more tears are shed in her books than in Knausgård’s.’ The reviewer of Petterson’s most recent novel wonders if his protagonist, a novelist, will ever manage ‘to free himself from his own misery’. And Merete Morken Andersen has written a spirited biography of the unhappy Amalie Skram (1846–1905), the great Norwegian-Danish naturalist writer, and the times in which she lived, offering readers ‘one of several ways to understand an era of deepening unease’.