He pointed a way for American fiction out of the doldrums of postmodernism, writes George Blecher. For a culture troubled by the corrosive commercial media and closed-end systems underpinned by modern technology, David Foster Wallace’s influence remains a force to be reckoned with.

Excerpts – short glimpses – don’t really do justice to Wallace’s work. His strongest suit was the long story, a form that he virtually invented. Somewhere between a story and a novella, Wallace’s long story was one extended scene so packed with ideas, shifting tones of voice, exotic words, Proustian long sentences – so bursting with intelligence and authorial passion – that it is like getting a five-course dinner for the price of a sandwich. In an era where books get published mainly because they resemble other books (or TV programs), Wallace’s eager, relentless, self-conscious voice is instantly recognizable. 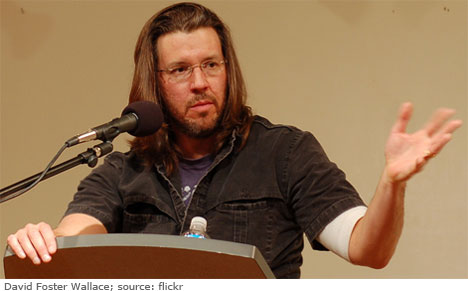 David Foster Wallace (in American literary circles, his name has already been shortened to “DFW”) was a genuine literary phenomenon, one of those shooting stars that comes along every century or so, changes the course of the discipline but then is consumed by it. In Wallace’s case, he hanged himself at the age of 46 five years ago in his home outside Los Angeles, where he was a professor of creative writing; like Rimbaud and Keats, his life has already entered the realm of mythology.

Born in 1962, the son of two academics, he grew up in an unlikely area of rural Illinois. (Perhaps not so unlikely if you recall that Mark Twain, Hemingway, T.S. Eliot, F. Scott Fitzgerald, Theodore Dreiser all came from the unfashionable Mid-West.) In addition to being a brilliant student, Wallace was by his own admission an enthusiastic abuser of some of the more popular addictive substances of the day – marijuana, alcohol, TV programs – all of which figure prominently in his novel, Infinite Jest (1996), a comic analysis of American pop culture that caused a sensation among college students, put him squarely on the literary map, and is still considered by many critics to be his magnum opus. What he didn’t write about from his early years – and only touched on obliquely in his later work– were his two mental breakdowns and hospitalizations. Modern psycho-pharmacology provided him with medication that helped him to have a relatively stable life and productive career, but decades later, when he tried to go off the meds, he found that he couldn’t recapture his former equilibrium: sad to say, a very twenty-first century death.

All this autobiographical material wouldn’t be especially relevant to an appreciation of Wallace’s work except that from the very beginnings of his career – in his case recognition came lightning-fast – he became a kind of public literary spokesman, writing essays and offering long, carefully tooled interviews about how late twentieth century American mass media created an atmosphere of ironic detachment, substituting superficial, inauthentic work for the old humanistic injunction to produce “morally passionate, passionately moral fiction.” Somewhat uneasily, Wallace identified himself as a postmodernist, which in the United States meant that as a student he cut his eye teeth on hyper-intellectual, French-inflected deconstruction as well as on a school of American satirists like John Barth and Thomas Pynchon, whose work, Wallace ultimately concluded, was witty and clever but solipsistic and morally shallow; indeed, as critic Zadie Smith has written, “solipsism was […] for [Wallace] the true horror.”

Especially in his early writings, Wallace wasn’t totally free of these qualities himself. His early fiction – the novel The Broom of the System (1987) and the short story collection Girl With Curious Hair (1989) – while full of wildly imaginative passages, relies to a great extent on the grotesque, cartoony features of American postmodernism, and communicates a sense of having been written for a specific group of young intellectuals who all have the same library of books and share the same literary values. Though Wallace was aware of this exclusionary aspect of his work and that of some of his contemporaries – in one interview he calls it “the desperate desire to please, coupled with a level of hostility toward the reader” – his awareness itself has a performative quality. One hears a brilliant sensibility that is careerist and self-critical, vain and disgusted by its vanity – a pretty predictable set of emotions, given Wallace’s talents and the brutally competitive American literary scene, or what’s left of it.

Out of these contradictory feelings, as well as a voracious mind that absorbed everything from modal logic to TV minutiae, came Infinite Jest (1079 pages long, edited down to a third of its original size), a monster of a book replete with multi-page footnotes, plots and sub-plots, not all of which are resolved by the end. Among other things, the book revolves around a tennis academy, a drug and alcohol rehab centre, a Quebecois secessionist group, and a film so seductive that it has the potential to keep all its viewers in thrall – a late-twentieth century Glasperlenspiel if you will, Wallace’s furious attempt to record in narrative form everything he observed and everything he felt. Though the book is often brilliant satire, it’s weakest when it comes to characterizations, which hover between stick figures and overly personal projections that are either idealized or vilified, depending on Wallace’s attitude toward them.

It may be as simple as saying that the faults of Infinite Jest are just those of Wallace’s youth. Much of his early fiction lacks what used to be called “experience”, a sense of a lived life that could take a talented writer beyond clever caricature into a morally complex universe where his capacity for empathy with other human beings was revealed and tested. Wallace seemed to experience this lack himself, and in the latter part of his career he did what many of his Mid-Western literary forebears had done: he turned to journalism. In long magazine articles he covered subjects as diverse as tennis (he’d been a ranked amateur player in high school), politics (a whole short book on John McCain’s 2004 Presidential campaign), county fairs, luxury cruises, the requirements of designing a good dictionary – to name just a few. Echoing the breathless style of Tom Wolfe, another novelist/journalist whose writing has always trodden a thin line between fact and fiction, these pieces are narrated in a naïve but erudite voice, a voice that’s highly analytic yet also charmingly awkward – a sensibility capable of being dazzled by new experience. Though the pieces can seem overlong and sometimes disingenuous, they’re full of fresh insights, as if a brilliant adolescent from another planet had been dropped on Earth and asked by his elders to record every detail of his moment-by-moment experience. Many of the essays have been collected in two volumes, A Supposedly Fun Thing I’ll Never Do Again (1997) and Consider the Lobster (2005).

To my mind Wallace’s fictional breakthrough – his progress from a love/hate relationship with irony to a more mature, sincere voice – came in a collection of related stories, Brief Interviews with Hideous Men (1999). Much of the book is a response to contemporary American feminism. About half the pieces are imagined dialogues between male chauvinist types (Wallace was called a “literary ventriloquist” for his ability to capture the voices of these unsavoury guys) and an “off-stage” female therapist or journalist who gets her subjects to respond at great length to questions that she doesn’t actually ask. It’s a haunting device that lets Wallace subsume and integrate his gifts into the psyches of his characters – in the words of Zadie Smith again, “allowing other people to exist in their genuine ‘otherness'” – while showing how isolated they are. A final book of long short stories, Oblivion (2004), combined the psychological depth of Brief Interviews (especially in the title story, a remarkable – and prophetic– act of empathy for a young man who commits suicide) with extravagant fictional conceits (such as a story about an artist who shits out his creations!), no doubt inspired by movie maker David Lynch, who was a great favourite of Wallace’s.

Only a few years after his death, it’s impossible to exaggerate Wallace’s influence on the American literary scene, which by now has elevated him to sainthood. Every year he’s read and appreciated by more and more people who were initially put off by his prolixity and dense prose. References to his style occur so often in book reviews that they’ve reached the level of a literary tic. Conferences all over the world analyze and discuss his work, and its connections to set theory, modal logic, and writers as diverse as Kafka, Dostoyevsky, Wittgenstein and Kierkegaard. Portions of Brief Interviews and his essays have been adapted for film and theatre, and his publishers have scrambled to publish everything he ever wrote, including his undergraduate philosophy thesis.

The critics are right to hear echoes of his voice in many contemporary writers, and not just in the United States: due to Wallace’s influence, sentences have gotten longer, vocabularies have expanded, writers have been given the green light to use their brains as well as their senses, stomachs and sex organs. Not only did Wallace point a way for American fiction to inch out of the doldrums of postmodernism, but he offered a valuable critique of how modern technology, both in the form of all-pervasive distractions like film and TV, and linguistic systems like pop psychology and advertising, can diminish people, detach them from themselves, yet can’t quite stamp out their longing to connect with each other.

This isolation and longing was the special focus of his unfinished novel, The Pale King (published posthumously, 2011). According to interviews, he set out on a quest that was as much moral as literary – to find the humanity in what seemed to him the loneliest, most deadening profession that the country had to offer: being a tax examiner for the Internal Revenue Service. Taking a page out of his journalism experience, Wallace studied accounting for a few years before launching into a long novel that examines the lives of a group of young tax examiners confined to a windowless building in a field in the region where Wallace grew up. Written in prose that attempts to cleanse itself of irony, the book is a “sincere” effort to mirror his characters’ own confused but curiously innocent sincerity. Though parts of it are touching, melancholy, even beautiful, the book as a whole lacks the angry energy that inflames his best work. Maybe the fact that Wallace couldn’t finish it had partly to do with his sense that we live in far from innocent times, and that the wish for complete sincerity is a form of self-delusion; or maybe he couldn’t accept the same fact that Milton must have encountered in composing Paradise Lost: the Devil is a much more interesting character than God.

Nevertheless, Wallace’s struggles – if not all his accomplishments – were desperately needed by a culture that is still troubled by the corrosive commercial media and the closed-end systems that he bravely criticized. The fact that he believed that literature really has the power to change things for the better has a moving innocence that we all can learn from.