The poor handling of the COVID-19 pandemic, long-standing economic stagnation and the violent suppression of protests against electoral fraud have sparked in Belarus an unprecedented popular uprising, the final outcome of which is still uncertain. Who has kept the protest culture alive among a population often accused of political apathy? What has been the role of women in the opposition to Lukashenka? And what game is Russia playing? 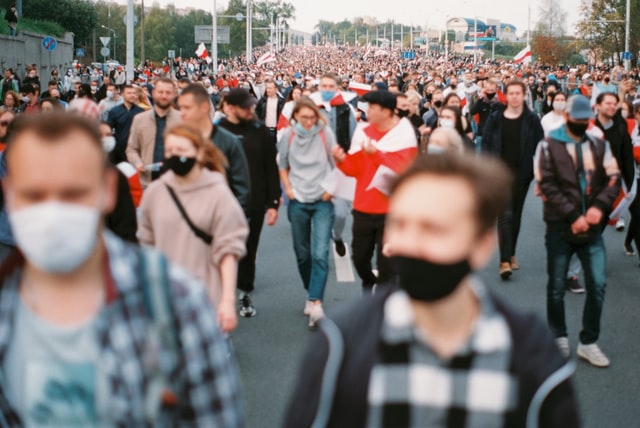 Photo by Andrew Keymaster from Unsplash.

A moment of choice

In Kantian terms, human dignity is absolute and a priori, and its violation is the denial of subjectivity and personhood. Reasserting dignity once it has been violated, on the other hand, falls within the realm of moral action. A revolution is a moment of choice in which ‘we take hold of ourselves as full human subjects with dignity’. Marcy Shore says that moment may have come for Belarus too.

In the run-up to the presidential elections on 9 August, protests signalled an unprecedented political awakening for the country. What is it that tipped the balance and took the people to the streets? To answer this question, Ingo Petz retraces the country’s history of nation building.

Experiences of World War II, the Holocaust, the Stalinist purges, and Chernobyl led to a deep aversion to conflict among Belarusian people. ‘The main thing is there is no war’ is an oft-repeated saying. Yet the social contract between the people and Lukashenka – the surrender to political freedoms in exchange for stability and modest prosperity – has been fractured, and now only violence and repression hold it together.

Out of the unknown

Hopes that Lukashenka could introduce liberalising reform were dashed by his handling of the COVID-19 pandemic: he downplayed the danger and showed no compassion after the first deaths. The social mobilization that followed caught the regime off-guard. ‘The question is what price the Belarusian regime will pay for its brutal preservation of the status quo’, Belarus expert Astrid Sahm tells Osteuropa.

Belarus: Status quo at what price?

‘A revolution is indeed taking place in Belarus – Olga Shparaga told Osteuropa shortly after the elections – but it is a post-national revolution. It is a democratic revolution in which subjects are becoming citizens’.

Unlike in nationalistic upheavals, Belarusian protesters are horizontally organized, privilege cooperation over competition, and make very little reference to the history of the country and its heroes. The fact that a collective of women has been leading the revolution is also telling: in the nationalist discourse, women only take care of the reproduction of the nation.

For a Belarusian res publica!

Sviatlana Tsikhanouskaya, Maria Kalesnikava and Veranika Tsapkala ‘were, in a certain way, representing three non-registered male presidential candidates’. But their alliance received an overwhelming consensus because they managed to combine messages of traditional values and female leadership. Olga Dryndova on the new female ‘soft-power’.

On the female face of the Belarusian protests

Moscow’s attitudes towards the protests in Belarus have been contradictory. Initially, ‘it seemed possible that if the Belarusian opposition could agree to terms that suited Moscow, Putin might consent to Lukashenka’s removal’, Lev Gudkov tells Osteuropa. Unlike the Euromaidan, the Minsk demonstrations were not anti-Russian.

But as the revolts grew beyond expectations, Putin committed to helping Lukashenka ‘restore order’. With the Kremlin’s support, time plays in favour of the Belarusian autocrat.

How Russia has tipped the balance in Belarus

In the unfolding of the revolution, the events departed radically from the script. What is it that took everyone – including the Kremlin – by surprise? The fundamental difference with the 2010 protests is that this time the Belarusian people took the front stage. ‘Society has been angered over what has been happening over the previous six months: Lukashenka’s attitude to the COVID-19 pandemic and the economic decline’.

‘Everything now depends on the courage and strength on of the Belarusian people to stand firm for their own interests, rather than the interests of scriptwriters in Minsk and Moscow’, Artur Klinaŭ tells Osteuropa.

The anti-Putin protests of 2011 and the Belarusian revolution have more in common than just the similarity of their symbols – white ribbons and white bracelets, respectively. Both movements have been largely spontaneous, and not controlled by any particular political organization.

However, ‘the protests in Russia were often explained in terms of their social basis and defined as “middle-class protests”’. In short, a whim of the urban elite. A similar narrative does not apply to Belarus: in the wake of the rigged presidential election, the revolts have proven to be an ‘all peoples’ movement. Or rather, in light of the lawlessness and systematic violence of the regime, a revolt of the state against the people, argues Volha Biziukova.

How did the Belarusian population overcome the political apathy that kept Lukashenka’s regime in power for 26 years? Ingo Petz gives credit to the ‘niches of liberty’ that shaped Belarusian protest culture over the last two decades. Journalists and media workers, artists and intellectuals, non-conformists, free spirits and activists. The Coordination Council, created by Sviatlana Tsikhanouskaya to promote a democratic transfer of power, features some of the most prominent Belarusian intellectuals.

The mood has changed

Among the members of the Coordination Council is Nobel laureate Svetlana Alexievich. ‘Today, personal life – which was treated with such derision under communism – carries far more weight than it did then. People no longer hide behind an ideology or an idea. They are seeking to make sense of their own lives and answers questions like: what does it mean to be happy? What do you take with you when you depart this world? What will you recall in the last few minutes your life?’. Talking to Eurozine’s partner journal Dziejaslou, Alexievich describes the legacies of the Soviet past and helps us understand the country’s fight for democracy.