‘Wespennest’ offers help; ‘Vikerkaar’ gets bored; ‘Critique & Humanism’ examines the narrative of Russian meddling; ‘2000’ remembers the ’68 that never was; and ‘Multitudes’ discusses blockchain and the end of capitalism. 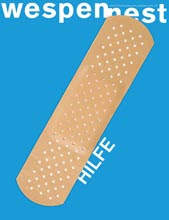 ‘One might say that the institutionalization of help is a great civilizational achievement – while mutual support in smaller groups is a natural phenomenon,’ writes Ilija Trojanow in his introduction to the new issue of Wespennest. ‘However, the way we understand help is changing. Neoliberal pressure towards the economization of all realms of life has extended to help … We live in times when the structural provision of care is not guaranteed worldwide, and when we lack the means to compensate for this through private or public help. Given these structural shortcomings, a fundamental question arises: charity or solidarity?’

Political responsibility: ‘Within a very short period of time, the logic of national-categorical distinction and the playing off of the social entitlements of one’s “own” people against those of the “others” has become a familiar trope in political discourse, even where one had least expected it,’ writes Stephan Lessenich. ‘For all those who don’t want to submit to the new nationalist consensus, there now appears a way out: help! Not a cry for help, but the offer of help – spontaneously, as a matter of course, without being asked, unbureaucratically. Indeed, this is what many central Europeans – no: many, many millions of them – have been doing over the last few years on a daily basis, self-sacrificingly, often around the clock, sometimes to the brink of exhaustion and despair.’

Social work: Koschka Linkerhand writes about her experience of teaching an integration course in a small town in eastern Germany, and particularly about two women: Wahiba from Afghanistan and Zainab from Syria. ‘I cultivate towards them a social worker’s sense of sympathy: a kind of reified neighbourly love, which I not only can deal with, but which also gives me a lot … It is a good thing that my responsibilities are delineated, that my relationship to the refugees takes the form of waged labour and is not voluntary, which would fray around the edges and constantly require setting new boundaries. Twenty hours a week and no more. I can live well from that.’

Philanthropy: Kathrin Hartmann attacks the myth of the disinterested philanthropist Bill Gates. She speaks to David McCoy, an expert on global health who has studied the impacts of Gates’s philanthropy on research and policy. ‘The Gates Foundation spreads the myth that excessive and concentrated wealth is the result of a fair and efficient economic development and that it helps the poor through the so-called trickle-down effect’, says McCoy. ‘Charity is often an act of generosity. But it can also strengthen the power and dependency relationship between rich and poor, or be used to maintain unjust, undemocratic and repressive structures.’ 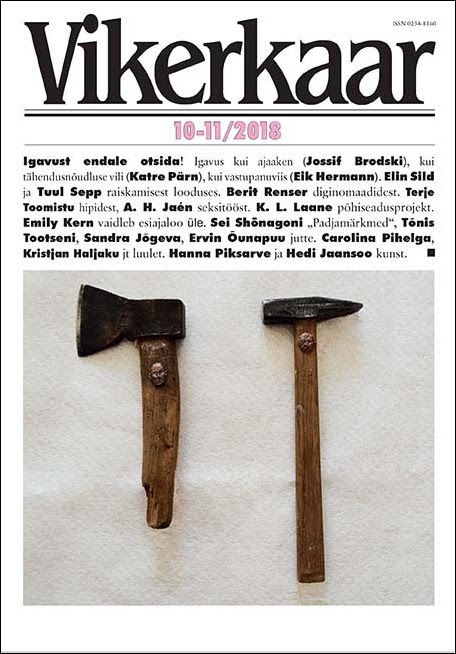 ‘Boredom is an invasion of time into your set of values. It puts your existence into its perspective, the net result of which is precision and humility.’ Taking Josef Brodsky’s praise for boredom as its starting point, Vikerkaar explores the political, cultural and philosophical implications of purposelessness, mucking about, wandering, aimless faffing and similar practices, from the transformation of nomadism in the digital age to the evolutionary biology of unproductive action.

The politics of boredom: In an age defined by productivity, efficiency, and constant calls for creativity and engagement, boredom can point us towards points of political possibility, writes Eik Hermann. Power is often exercised through boring, bureaucratic institutions, acts of classification, data gathering, technical jargon and capacity-building – processes that provide little spectacle but are no less important for that. Hermann calls for valorizing the political potential of boredom – the moments of taking stock, reflecting, reassessing, but also the slow boring of hard boards (Weber) that goes into any form of political organizing.

Soviet hippies: Although many hippies in the Soviet Union claimed to be uninterested in politics, politics did not distance themselves from hippies, argues Terje Toomistu. Long hair, bright clothes and the use of home-made hallucinogens were interpreted as signs of seditious activity by the KGB, forcing many hippies to take a political stand. And besides, in a society where everything was, by definition, politics, stepping outside of this framework was in itself a revolutionary act.

Pre-history: Anthropologists have recently questioned assumptions about the role of farming in the emergence of the bureaucratic state and the inevitable connection between inequality and urban life. But while it is important to challenge doctrines of civilizational development, their origins must also be examined if conventional knowledge and its blind spots are not to be reproduced. Historian of science Emily Kern responds to David Wengrow and Davis Graeber’s Eurozine article ‘How to change the course of human history’. 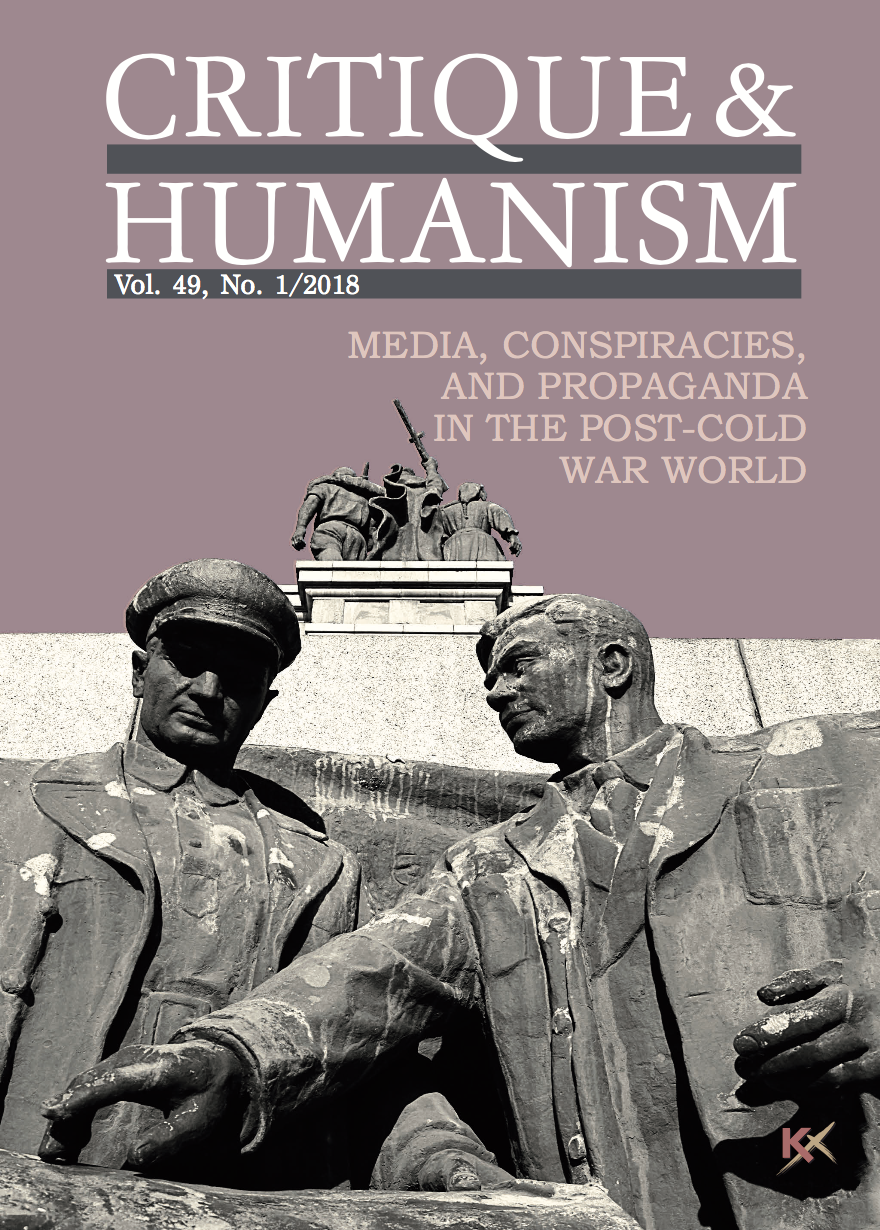 In an issue on ‘media, conspiracies, and propaganda in the post-Cold War world’, Critique & Humanism puts together a selection of articles centring on the question of Russian influence in democratic processes in the West.

Hybrid war: Moscow envisages two separate kinds of ‘hybrid war’ with the West, writes Mark Galeotti. First, political destabilization to prepare the ground for a ‘shooting war’, as in Crimea. Second, political war ‘in the hope … of dividing, demoralizing and distracting [the West] enough that it cannot resist as the Kremlin asserts its claims to what it considers its rightful role as a great power’. Such a strategy has a history: ‘From the tsars through the Bolsheviks, the Russians have long been accustomed to a style of warfare that refuses to acknowledge any hard and fast distinctions between overt and covert, kinetic and political … Sometimes, this has been out of choice or convenience, but often it has been a response to the time-honoured challenge of seeking to play as powerful an imperial role as possible with only limited resources.’

US elections: As long as the Muller enquiry remains open, it is unclear whether Russian interference played any fundamental role in altering the outcome of the US elections in 2016. Indeed, Russophobia among leading political and media circles in the United States may have played a role in promoting this conspiracy theory. ‘Cold War views have not entirely disappeared from the public mind’, argues Andrei Tsygankov. ‘Following the election of Trump as US President, the liberal media presented him as the Kremlin’s proxy and a main contributor to defeating the liberal candidate Hillary Clinton. Russia’s otherness, again, served to distract public attention from failed liberal policies and to preserve the confidence of the liberal self.’

Bulgaria: Tom Junes examines the presidential elections of 2016 in Bulgaria, demonstrating that, more than any actual Russian influence campaign, it was a western narrative of Russian influence that framed the elections as part of a wider contest between Russia and the West. ‘Following [Rumen] Radev’s victory, several Bulgarian outlets began publishing “voices from Russia” … to suggest Russian meddling and thus a foreseeable “turn to Russia” under Radev’s presidency.’ While the comments by Aleksander Dugin and others, ‘certainly represented propaganda and disinformation, they were made more potent by the coverage and significance assigned to them by serious Bulgarian outlets. In this sense, more readers would read “about” Russian propaganda than read the propaganda itself.’

Coopting discontent: Milena Iakimova and Dimitar Vatsov discuss how Russian propaganda co-opts western grassroots criticism of liberalism and globalization, recasting both left and right populism in nationalist terms. Vice versa, local actors borrow the Russian propaganda package and use it for their populist purposes. An analysis of Bulgarian media discourse 2013–2016, part of the Eurozine focal point ‘Disinformation and democracy’. 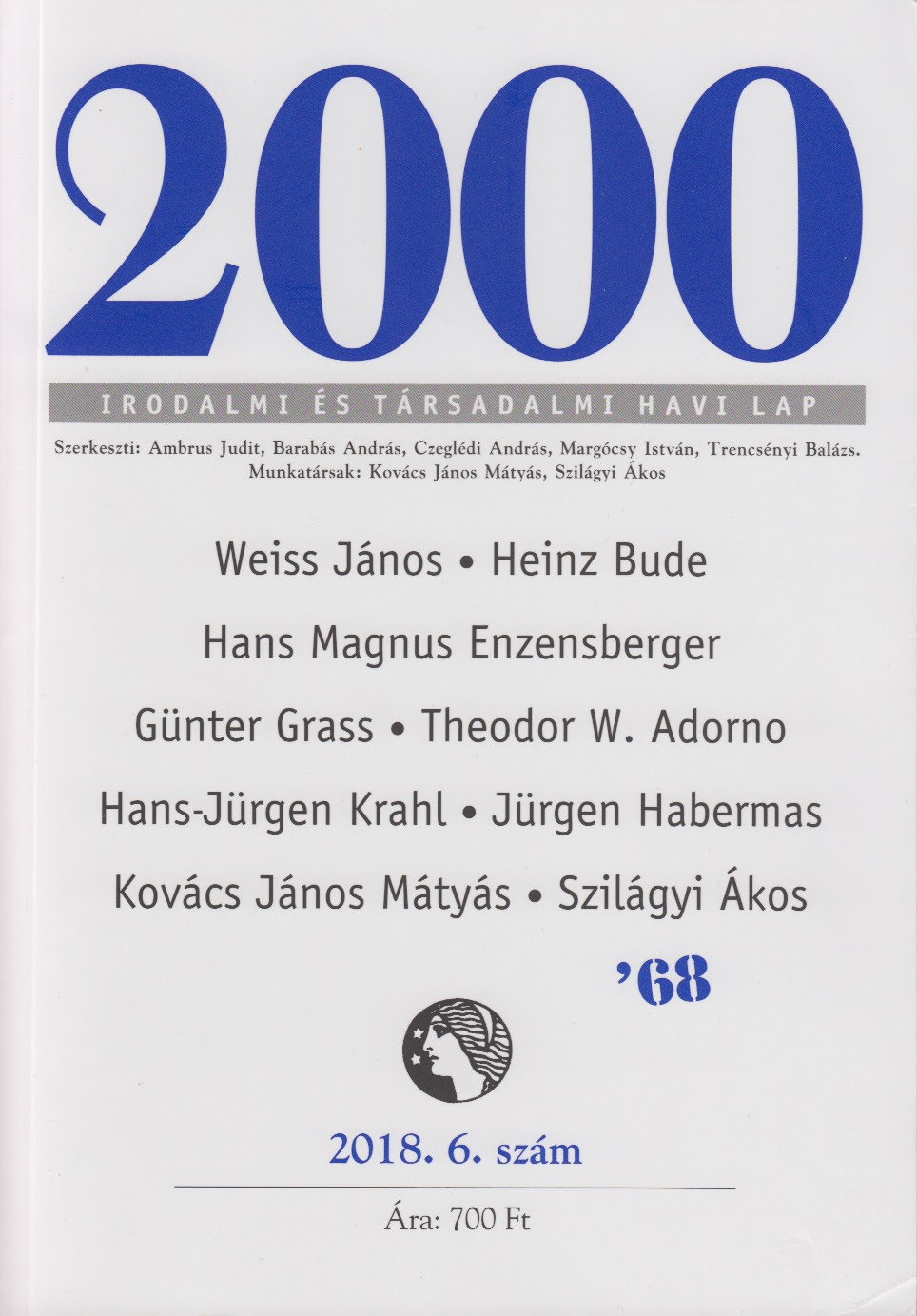 The latest issue of 2000 combines texts on the West German 1968 together with the accounts of two Hungarian authors, both self-identified ’68-ers. Besides Günther Grass’s Mayday speech and Theodor Adorno’s address against the emergency laws of that year, there is the speech by Jürgen Habermas at the Frankfurt university canteen on 2 June 1968, in which he accuses student leaders of abusing their potential. The issue also includes authors Hans Magnus Enzensberger and Hans-Jürgen Krahl, whom Habermas refers to as members of ‘the cast of this political theatre of insanity’.

Hungary: Alongside the historical snippets, there are two very different takes on the Hungarian relevance of 1968, or rather: the odd silence around 1968 in Hungary. At the time, the country was re-branding itself as ‘the most cheerful barrack’ in the Soviet experiment, only a dozen years after the uprising of 1956. Hungary was thus out of touch with the international zeitgeist, even though Hungarians themselves might have not been so.

Economist János Mátyás Kovács gives a deeply personal account of his experience of the mildly suffocating Hungarian 1968, which coincided with his coming of age – both as a thinker and as a young man. Poet Ákos Szilágyi, in contrast, calls to account those he sees responsible for what he calls ‘the historical oblivion of 1968’. He reads 1968 from the perspective of 1989, evaluating the political generation of 1989 as exploiters of the remaining charisma of the last western revolution. 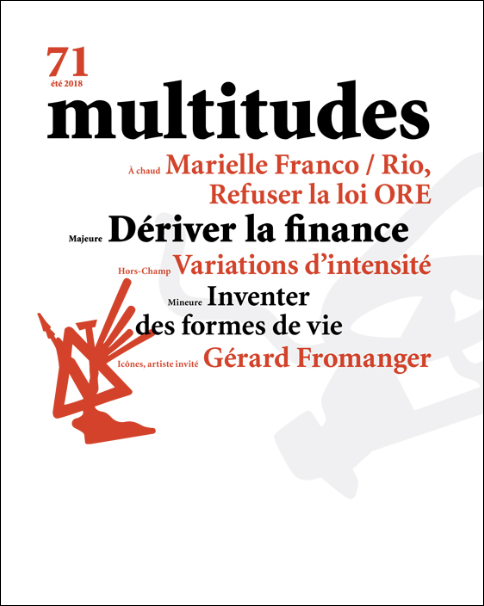 Marking the tenth anniversary of the 2008 financial crisis, Multitudes publishes an issue exploring neoliberal finance present and future. Yves Citton discusses whether ‘a form of post-capitalism [is] brewing in the arcane procedures of financial derivatives’. Mapping the post-Marxist hypothesis that financial derivatives and Blockchains are pushing a certain dynamic of capitalism to its point of reversal, he writes that ‘finance represents capitalist privatization in its most aberrant form and the internal necessity to resist to the aberrations of this same privatization’.

Blockchain: ‘Could we forestall the excesses of capitalism by relying on technologies that enable its renewal? Could Blockchain protocols encourage the emergence of post-capitalist futures?’ Guillaume Heleu and Anthony Masure explore the functioning as well as the potential of Bitcoin and other crypto currencies, which avoid the control of banks and governments. Heleu and Masure insist on the importance of ‘deconstructing the technical and semantical strata of Blockchain protocols so that they become tactical media that exploit the failures of universal standardization, facilitating the emergence of a more democratic society.’

Democracy: Sandra Laugier discusses the idea of ‘forms of life’ as used in various theoretical and activist contexts. ‘Democracy’, she writes, ‘is both and inseparably a form and a force of life’. Her article explores philosophical theories of democracy from Wittgenstein – ‘the form of life is agreement in the language’ – to Dewey, who defined democracy as ‘the investigation to which everyone contributes in order to find solutions to a common problem’. Laugier also explains how democracy as investigation and form of life is developed in film, including 120 battements par minute – a ‘lesson of life and of participative democracy and an active subversion of hierarchies between experts and citizens’.