A whiff of disloyalty 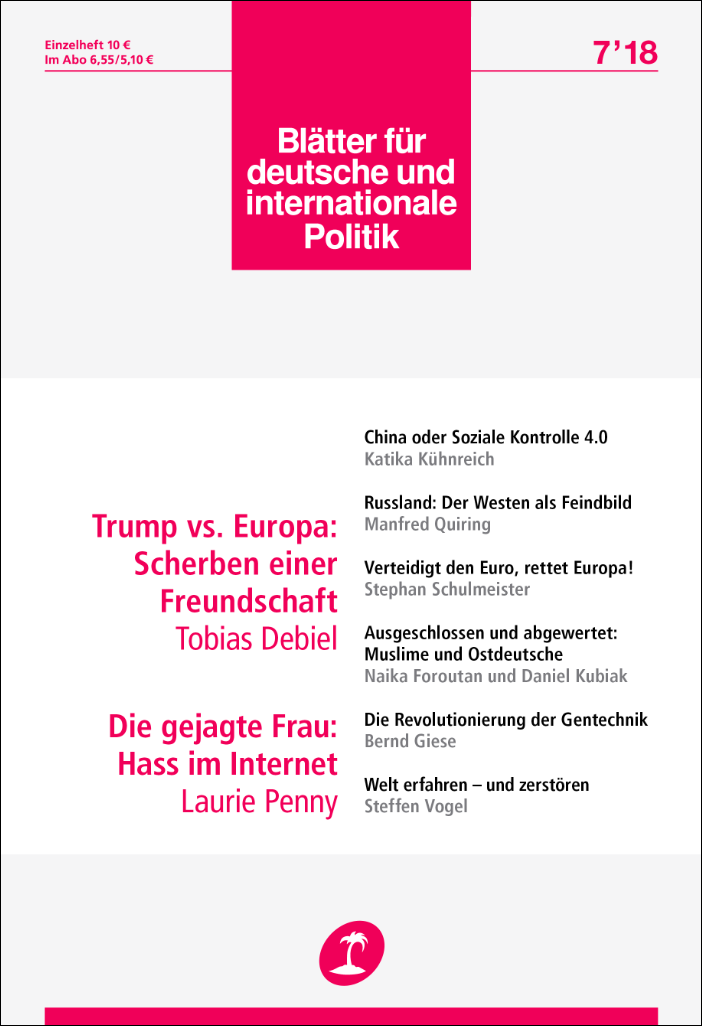 Behind the power politics of the German coalition crisis lay a substantive dimension, writes Albrecht von Lucke in Blätter: renationalization at both national and European levels. The backdrop to the conflict between CDU and CSU was the collapse of European multilateralism: ‘Macron’s call for the “re-foundation” of the EU overlooks that this has already been underway for a long time, namely on the part of the central and eastern Europeans, above all the Visegrád countries, in the direction of a Europe of ethnic-authoritarian nation-states.’

According to von Lucke, the Austrian presidency of the EU, which began this month, marks the division of the Union into a rightwing-populist camp and a diminishing liberal-western camp – the ‘fatal legacy’ of Merkel’s go-it-alone refugee policy. ‘In the meantime, Merkel herself has adopted the Hungarian maxim of “flexible solidarity”, essentially meaning that each country independently decides whether it accepts migrants – and if so, which. The search for bilateral solutions cannot hide the fact that Merkel’s idea for a common European refugee policy has failed.’

Social control 4.0: The online ‘social credit systems’ being built by the Chinese government evaluate and discipline citizens according to their social and consumer behaviour. In the West, these plans appear strange, writes sinologist Katika Kühnreich. And yet, they are not so dissimilar from those operating here. 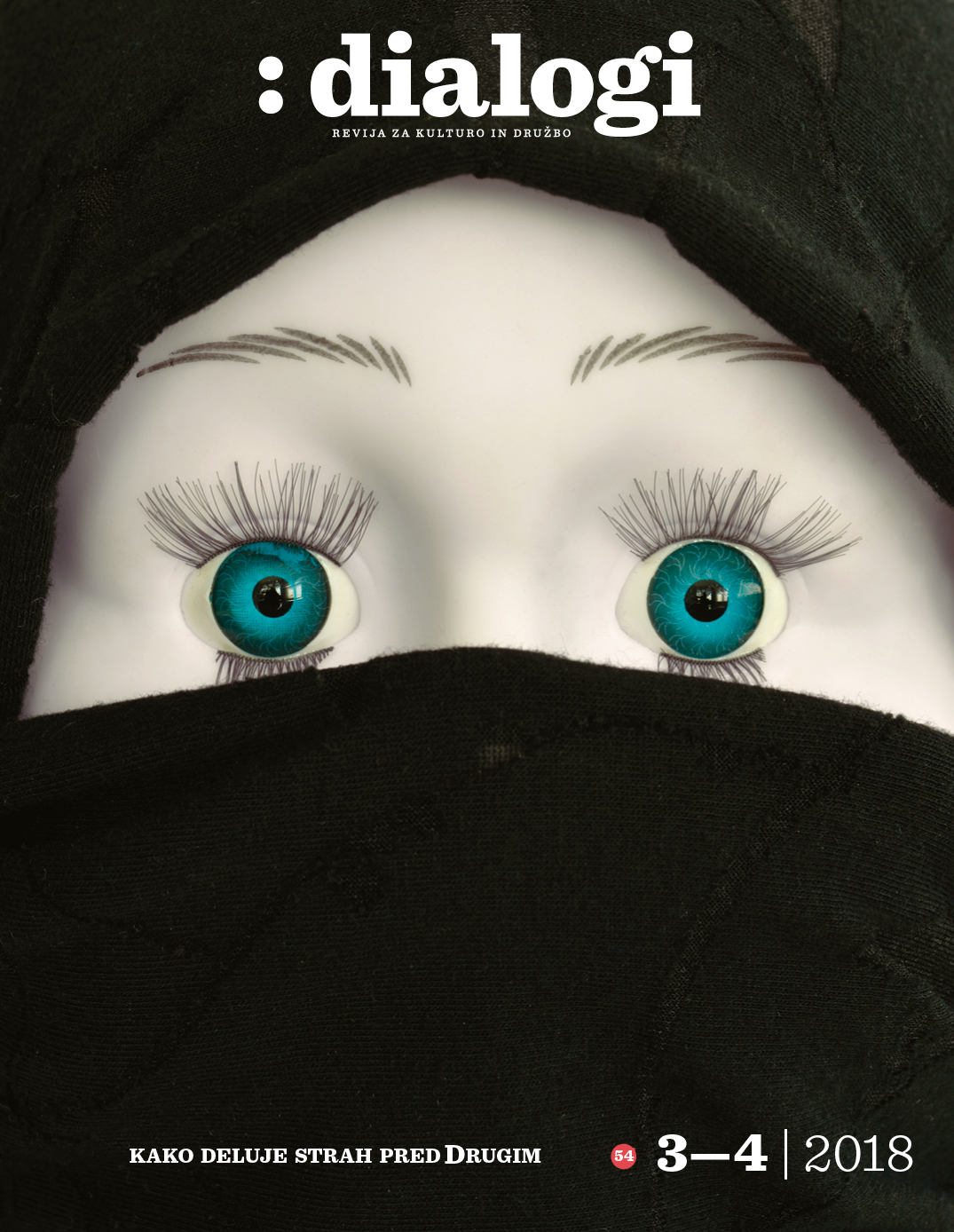 ‘If there were no refugees, politicians would need to invent them’, writes Boris Vezjak in his editorial for the latest issue of Dialogi. He describes how Janez Janša, whose hard-line nationalist party emerged in first place in last month’s parliamentary elections in Slovenia, has developed a close working relationship with Hungarian premier Viktor Orbán.

‘Orbán and Janša are long-standing political friends and kindred spirits … A consistent anti-refugee policy and rhetoric of fear is the strongest dimension of [their] new political orientation – and public opinion polls, as well as election results, mostly indicate that the strategy is proving effective.’

He identifies commercial and other ties between illiberal politicians in central Europe: ‘Instead of a normal path of democratization, we increasingly witness autocracy, the undermining of principles through a system of nepotism, and mafia activity, in which corruption is normalized.’ Janša has so far failed to form a government, but ‘illiberalism, Vezjak warns, ‘represents a crucial aspect of Orbánization as a new political approach, one that we are also now subject to in Slovenia.’

Theatre history: Art historian Ana Kocjančič looks at how interwar Slovenian theatre blended European avant-gardes. At the forefront of the new drama were not professional stages but folk and workers’ venues. Translating international ideas into a formal language of its own, Slovenian folk theatre was also instrumental in exposing new currents to the broader region. 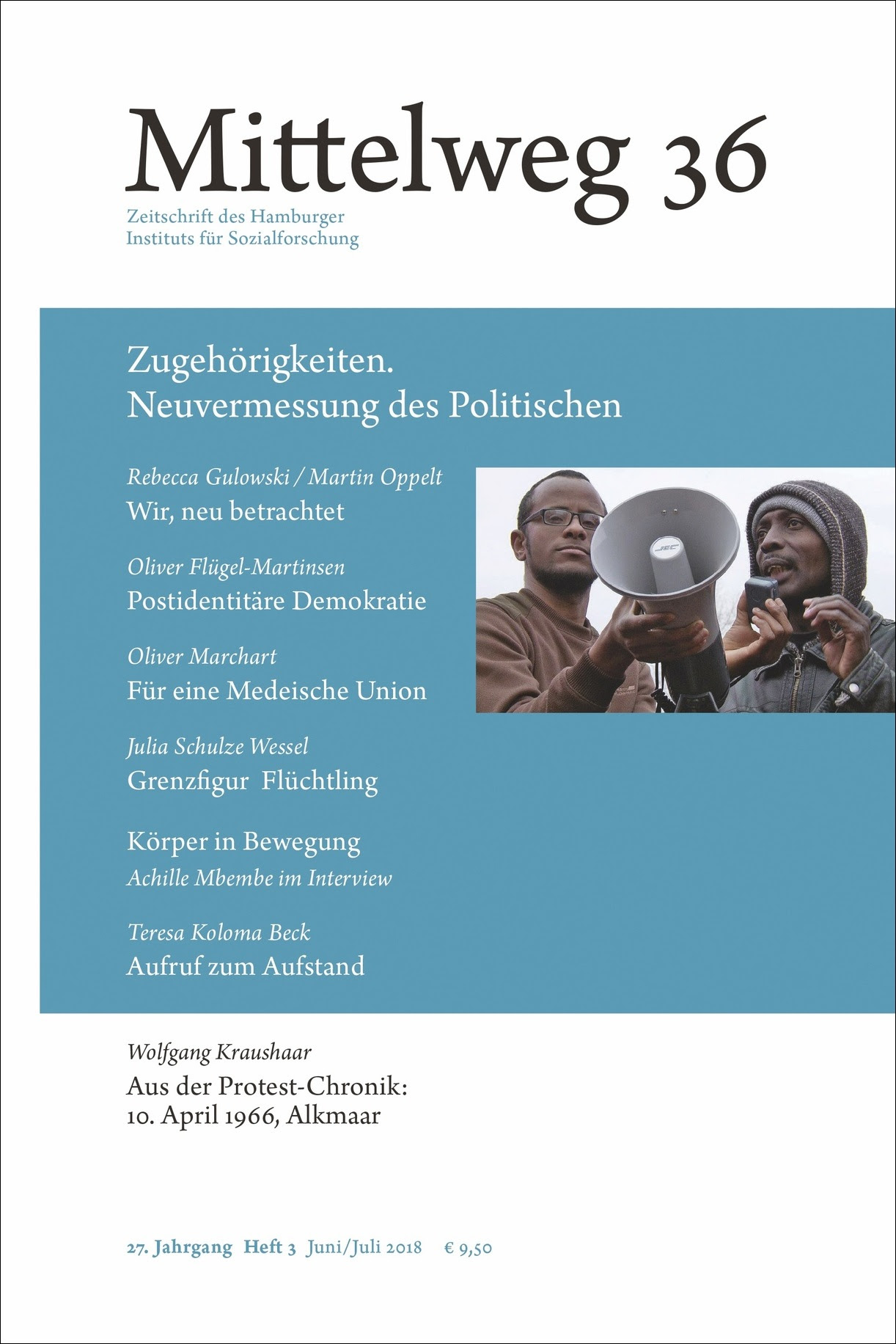 Today’s migration movements provide an opportunity to rethink solidarity and political participation, write Rebecca Gulowski and Martin Oppelt, introducing the new issue of Mittelweg 36. Contributions explore alternatives to conventional multiculturalist approaches. Influenced by new directions that make national citizenship partly responsible for the powerlessness of many migrants, the issue examines the ‘particular, plural and reversible nature’ not just of epistemic but also social and political foundations, as Oliver Marchart writes.

Solidarity: European societies, argues Marchart, are situated in a political and economic interregnum that Gramsci described as an ‘organic crisis’, in which ‘the old is dying and the new cannot be born’. The response must be a politics of solidarity and ‘self-alienation’: ‘Solidarity with the other requires giving up solidarity with one’s own community. From the perspective of the latter, this kind of solidarity always has a whiff of disloyalty … However, this is precisely what characterizes the modern concept of solidarity, which runs counter to the traditional identitarian concept and for that reason is repeatedly denounced.’

Border figures: For Julia Schulze Wessel the term ‘border figure’ expresses the idea that refugees are not only produced by a particular political system, but are involved in its production. The refugee march from Budapest to the Austrian border in September 2015 was a demonstration of just such political agency, she argues: ‘The border space is not just a space of repression and control, it is also a space of engagement, argument, conflict, breaking the law, subterfuge, the attempt to escape the hand of the sovereign.’

Also: Oliver Flügel-Martinsen examines the return of once obsolete figures of racist exclusion, deconstructing post-factual and populist strategies; and Achille Mbembe talks in interview about ‘bodies in movement’ and their political significance in the context of a new division of the planet. 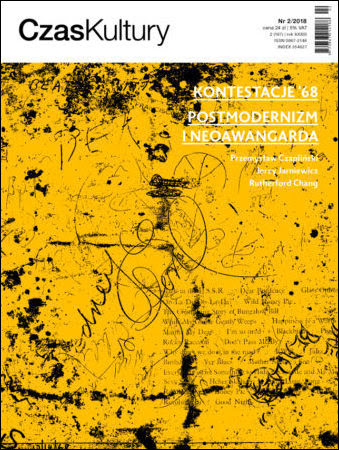 Fifty years after leftists worldwide took to the streets to challenge bureaucratic, social and military oppression, Czas Kultury explores the causes and repercussions of the demonstrations that spanned the US and parts of Asia, as well as western Europe and the communist Eastern Bloc.

Joanna Bednarek looks at the paradoxes and aftermath of the watershed year of 1968. ‘Why did an attempt to emancipate, liberate and discover life anew end in such ruthless and successful colonization by capital?’

Beginnings and ends: Many students taking part in the French protests had known only privilege, the security of social welfare, and educational opportunity, argues Bednarek. Workers who went on strike had rising expectations. Yet the social environment – shaped by fascism and war – was conformist and highly discriminatory. ‘The key motive for the revolution was anti-authoritarianism. It was driven by an urge to recognize and resist any form of domination.’

The rebels sought to expose different types of control, but also promoted a myth of spontaneous ‘unalienated’ freedom. This was articulated in speeches, often made by professionals with well-honed rhetorical skills that helped to mask an emerging ‘hierarchical structure cloaked in language promoting equality and resistance to the system’.

In later years, radical thinking worldwide absorbed feminist, anti-racist and ecological concerns. But, as Bednarek points out, these ‘were redefined as “cultural” or “identity” issues promising change for limited sectors of society not for everyone … Class-related problems came to be categorized as challenges of identity or were dismissed as isolated and outdated.’

Body politics: Drawing an extended analogy with autoimmune disease, Przemyslaw Czaplinski suggests that Polish ‘national capitalism’ seeks to attack and destroy its own healthy body tissues. Politicians have been homing in on some very curious ‘enemies within’: pregnant women thought to be acting ‘irresponsibly’; areas of natural beauty protected under EU directives; and voters who fail to qualify as ‘real Poles’. 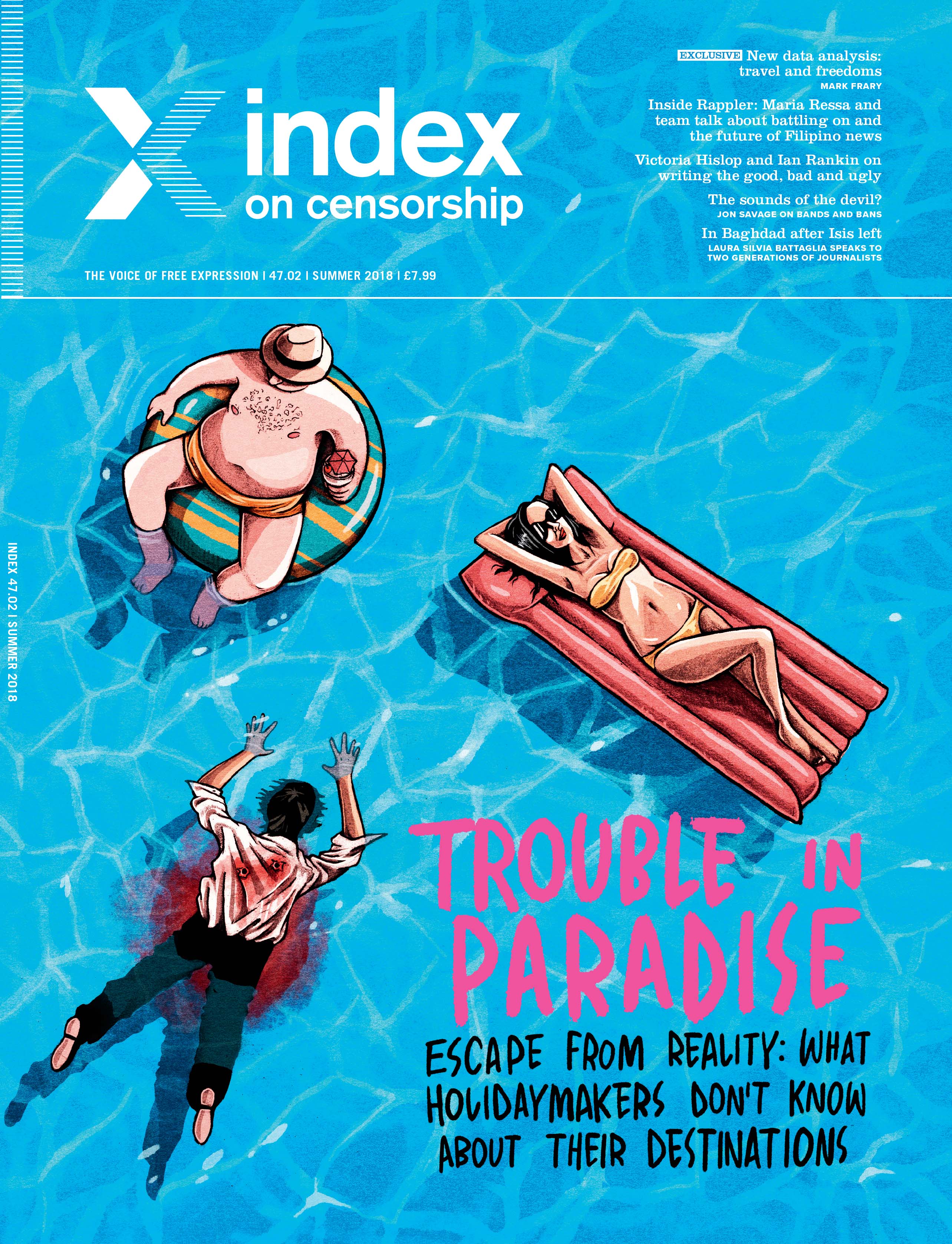 In its summer issue, Index on Censorship asks reporters ‘to dig into the details of popular holiday destinations’ and to look into their records on freedoms like the right to protest and to report. ‘The results are stark,’ writes editor Rachael Jolley: ‘Many … do terribly on freedom of expression.’

Italy: Irene Caselli profiles Federica Angeli, a reporter for La Repubblica currently under 24-hour protection because of her investigations into criminal gangs in Ostia, a beach resort near Rome she describes as ‘a paradise inhabited by demons’. Italy’s political atmosphere is also hostile: ‘the Five Star Movement (M5S) … has been vocal in its criticism of the media and has repeatedly named journalists of whose work it does not approve’. Matteo Salvini, the leader of the far-right League, also part of the new government, has also ‘railed against journalists’.

Malta: The murder of investigative journalist Daphne Caruana Galizia in October last year shocked the international public. But Malta’s problems go back much further, reports Caroline Muscat: ‘Since the Panama Papers revelations, journalists have piled up stories of scandals, but nothing has changed. Deals selling off the country’s assets continue to be made, shrouded in secrecy. And in the midst of all this, calls for justice for an assassinated journalist continue to echo in the air.’ Muscat describes ‘a society bent by corruption’ and a government obsessed with its public image.

France: Jean-Paul Marthoz cites the French counter-terrorism law passed in 2017 that ‘allows police to search people without a warrant in a 20-kilometre radius of ports, airports and international trains stations.’ He also observes a change in attitudes towards journalists: ‘During the April rail strikes, TV crews were forbidden … to film and interview stranded passengers unless accompanied by a company “minder”.’ These efforts have played into extremist narratives, with ‘the far right … striving to hijack the free speech banner, despite a history of physical attacks on, and legal actions against, journalists.’