A plea from Kyiv

Putin’s autocracy has a reason to be afraid of its smaller neighbour: a working democracy always threatens a tyrant. Supporting Ukrainians’ fight for self-determination is not only a moral obligation, but an existential question for the democratic world.

…never send to know for whom the bell tolls; it tolls for thee.

The attack of Putin’s Russia on Ukraine will become a new and sombre watershed in modern history. It had a long and methodical build-up and various dry runs — the annexation of Crimea in 2014, the eight years of on-and-off war in the Donbas, before that the invasion and annexation of parts of Georgia and Moldova, the vicious devastation of Chechnia and its capital Grozny, and in the more distant past, centuries of Russian imperialist expansion.

But in postwar European history, it stands out for its scope and extremist character.  Without provocation and with naked aggression, an autocratic Russia attacks with full military force a neighbouring country — supposedly a ‘brotherly’ one and Slavic to boot — and calls it a defence against a deadly threat to itself.  Which contains a kernel of truth: for a dictatorship, democracy is, in fact, a threat. 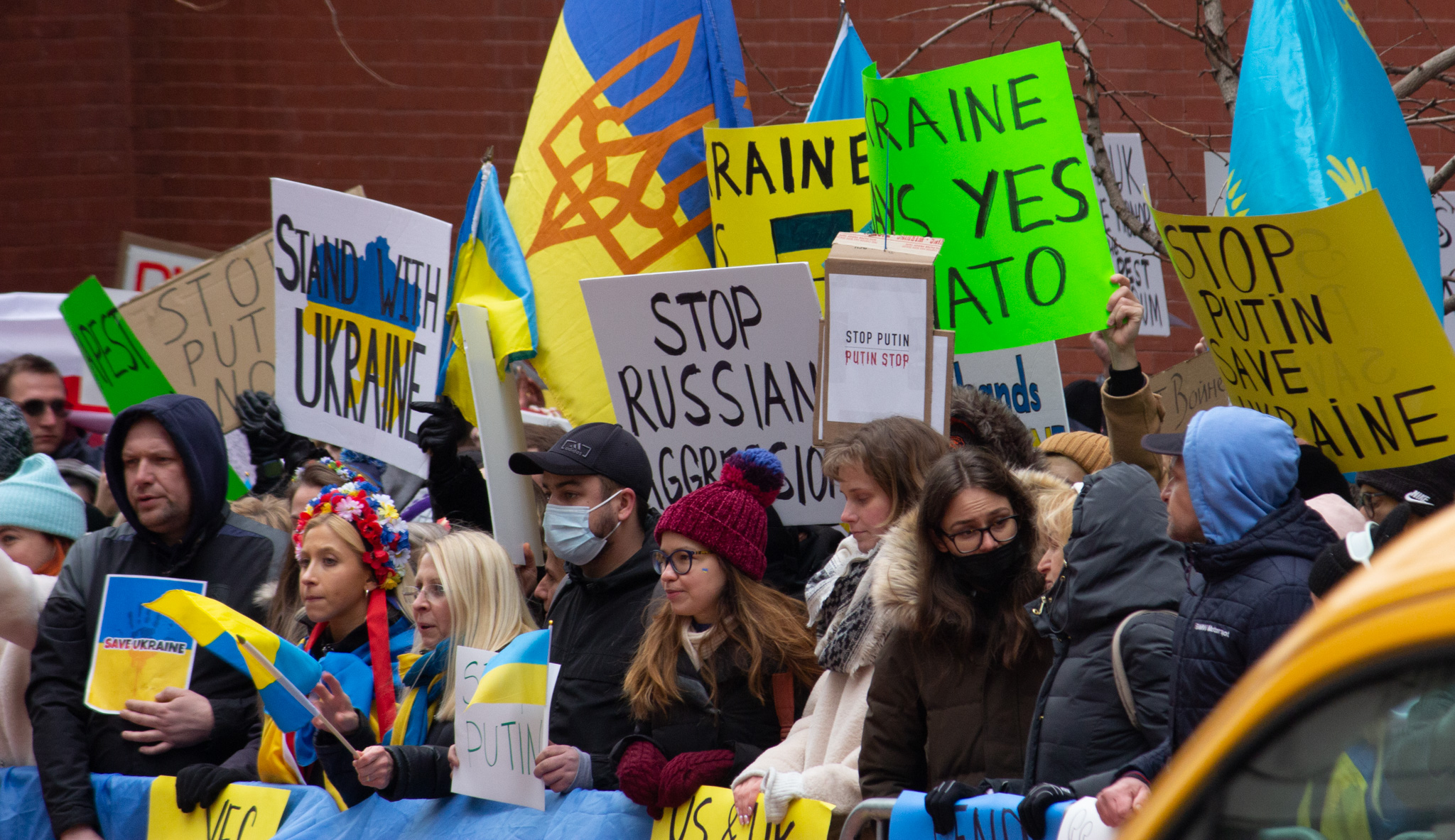 A demonstration in support of Ukraine in New York City on February 24, 2022. Photo by Andriy Yatsykiv, flickr.com

As one sees from Putin’s speech on the eve of the attack and from his earlier writing, the ideological basis for this aggression is a thesis built of imperialist lies and cynical distortions of history. These lies suggest that Ukraine never was and never had the makings of a state and a separate culture and thus lacks both de facto and de jure justification for its separate existence; all it can be is a province of or an addendum to Russia; at best a vassal state in its orbit.

In his unapologetic revanchism and desire to avenge past wrongs and turn back the clock of history, particularly the fall of the Soviet Union, and his hypertrophied sense of the mission and grandeur of his country, his vision reminds us nothing so much as of Hitler on the eve of and during the Second World War.

A typical feature of this modern dictator’s tactics is a zombifying of his countrymen by projecting onto his opponent qualities that describe him and the society he is constructing, such as ‘Nazism’ and ‘militarism’: these, he supposes, define democratic Ukraine and not Putin’s autocratic Russia.

The planned extirpation of Ukrainian ‘Nazism, extremism and militarism’ will involve installing a puppet regime in Ukraine, curtailing or destroying civil society and free media, and, as in Russia, rounding up and arresting ‘subversives’ and ‘dissidents’, including those Russians and Belarusians who had taken refuge in Ukraine from the regimes of Putin and Lukashenka.  The existence of carefully prepared kill lists of prospective opponents to be rounded up and ‘neutralized’ has been prominently noted by American intelligence whose accuracy has been shown to be spot on.

In this war Ukraine remains alone in its confrontation with a much more powerful Russia, armed with nuclear weapons, seeming totally subservient to Putin’s will. Regardless of the sympathy with which American and western media and political figures may treat Ukraine, we stand alone in this fight. Sanctions do matter, and may eventually impact Russia’s behaviour, and weapons do help, but ultimately, the people of Ukraine are now left to their own fate.

The argument for this is seemingly straightforward and iron-clad: Ukraine is not in NATO and only members of NATO can count on collective defence.  The fact that for various objective and subjective reasons Ukraine could not join NATO during its window of opportunity, is now conveniently forgotten — even though the country did give up its nuclear arsenal at the demand of both the West and Russia, and was provided with ‘iron-clad guarantees’ from both sides in the so-called Budapest Memorandum of 1994.

But Ukraine’s defence is a moral and existential issue for the entire Western and democratic world. These considerations trump the crypto-legalism of missed deadlines or windows of opportunity.

By defending Ukraine, the democratic world will also be defending itself and its moral and existential right to exist. Without this action, it will continue its demoralization and atomization, and be more open to further encroachment from an implacable enemy openly vowing its eventual destruction.

Or have history and the facts unfolding before our eyes taught us nothing?  To paraphrase the poet, like every man, no country ‘is an island entire of itself’; it ‘is a piece of the continent, a part of the main.’

George G. Grabowicz for the Editorial Board of Krytyka