A day in the life of a climate scientist

For a 24-hour period in May 2012, a billboard displaying Unabomber Ted Kaczynski’s mugshot gazed blankly at drivers along the Eisenhower Expressway in Maywood, Illinois. Alongside Kaczynski, whose string of bombings killed three and injured 23, was the following caption: “I still believe in Global Warming. Do you?” The poster was one of many, paid for the Heartland Institute, a Chicago-based rightwing think tank, that compared a roster of US villains, among them Osama Bin Laden and mass murderer Charles Manson, to climate scientists.

The connection? Their shared acceptance of man-made global warming. 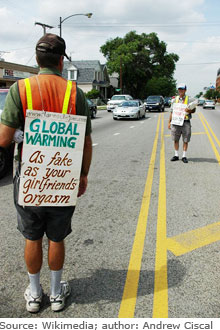 The campaign was shortlived. The Unabomber billboard was taken down after just one day following complaints and a slew of corporate donors have since jumped ship. The posters may have been tasteless, but Hans Joachim Schellnhuber, director of the Potsdam Institute for Climate Impact Research (PIK), does not advocate their removal. “If you believe in free speech, it should be universal,” he says on the telephone from Potsdam, a seat of scientific research in Germany since the 19th century. “I would be very reluctant to say that certain things shouldn’t be said. I believe that my freedom ends only when I breach the freedom of others.”

The parallel drawn by the Heartland Institute – between climatologists and mass murderers – is nothing new to Schellnhuber. The 61-year-old has grown accustomed to the handfuls of protesters who follow him to high-profile conferences, armed with placards that accuse him of “green fascism” and “genocide”. As advisor to German Chancellor Angela Merkel and a member of the Nobel prize-winning Intergovernmental Panel on Climate Change, his visibility makes him an obvious target for climate change sceptics. His energy vision for the future is also one that is at odds with many commercial and political interests: Schellnhuber is a staunch supporter of a global infrastructure that ultimately replaces fossil fuels and nuclear energy with renewables.

Schellnhuber’s critics argue that switching to renewables will hamper economic growth in developing countries and lead to mass starvation. They further interpret his calls for sustainable development as a pretext for dramatically reducing the world’s population. This, he believes, stems from a lecture given in March 2009, just eight months before the UN climate change talks in Copenhagen ended in failure. At a pre-summit meeting in the Danish capital, Schellnhuber argued that if climate change continued unchecked, the carrying capacity of the planet would plummet to 1 billion inhabitants. Accusations of being Malthusian, of advocating eugenics and genocide soon followed.

As one of the world’s most influential climate scientists, zealous protesters are just one of the many forms of antagonism that Schellnhuber faces. Writing on his personal blog, Czech physicist Lubos Motl compares Schellnhuber to Reinhard Heydrich, an intelligence officer in Hitler’s Germany, who was known as the Nazi “God of Death”. Motl writes: “It may be a good idea for the German – or other intelligence services to physically deal with Herr Schellnhuber and his thugs before it is too late.” Then there is the hate mail that arrives at PIK every so often, calling him “little Hitler”, “madman”, “betrayer” or “big brother”.

One of the most explicit threats was made in Melbourne in July 2011. During one of Schellnhuber’s lectures, a man in the audience named Glen Isherwood stood up and dangled a hangman’s noose in front of him. Isherwood, a member of the right-wing Larouche Youth Movement, later claimed the noose was in fact a “metaphor for the clear agenda behind the fraud of climate change: to reduce the world’s population”. According to Schellnhuber, most of his detractors are connected to the LaRouche Movement. The network, which has chapters all around the world, was founded by Lyndon LaRouche, a former Trotskyist turned ultraconservative who has run for US president eight times, including once from prison. Emails to LaRouche PAC from Free Speech Debate were not answered.

The Isherwood incident took place at a time of considerable hostility towards climate scientists in Australia, who were caught up in a stormy debate over how to combat global warming. Prime Minister Julia Gillard’s proposal for a carbon tax – due to come into effect in July 2012 – was fiercely contested by both the mining industry and the opposition conservative party. Against this backdrop, climate scientists received emails threatening sexual assault, violence and even death (the severity of these threats has since been called into question by Australia’s privacy commissioner). The situation culminated in the Australian National University in Canberra transferring employees to higher security offices. Some took further safety measures, upgrading their home security systems, removing their telephone numbers from public directories and deleting their social media accounts.

The atmosphere of menace in Australia led Schellnhuber to declare shortly afterwards that it was only a matter of time before a climate scientist was killed. “I prefer not to believe it and my family prefers not to believe it,” he says. “But if you look around there is so much psychological instability and there are people who are deranged enough to think climate change is a conspiracy. It’s not impossible that a kind of science hater will one day commit a senseless crime.”

Despite this ominous conviction, Schellnhuber goes about his daily life as usual, although he admits to being more vigilant at night or when travelling to high-profile events. He is determined not to yield to intimidation, pointing to colleagues in the US, who have in the past asked for their names to be omitted from press releases publicising their own work. “That’s really going too far,” he says. “If you’re afraid of being named alongside your peer-reviewed publication then we have crossed the red line. I’m pretty sure that I will never abandon my own products.”

By comparing climate change scientists to serial killers, the Heartland Institute’s smear campaign turned on its head a longstanding analogy between those that deny the Holocaust and those that reject global warming as real. The rationale behind this argument is that while Holocaust deniers refuse to accept the past genocide of six million Jews, climate change deniers’ nonacceptance of global warming will result in the annihilation of future generations. Sitting in the former offices of Albert Einstein, the German Jew who conceived of the theory of relativity, Schellnhuber says he is intensely uncomfortable with the comparison. “We have to be extremely careful here,” he says. “The Holocaust is something so singular, it shouldn’t even be used as a metaphor.”

Although he believes in free speech for all, Schellnhuber adds a caveat: speakers should make their identities known. He says the media frequently pit genuine climate scientists against “experts” without relevant credentials to their name. The problem, he explains, is that presented with two experts, the public’s ability to differentiate between them is poor. The result is that media coverage of climate change can often make it seem as if scientists are neatly divided on the issue. In actual fact, while there are differences of opinion over how to tackle climate change, there is broad scientific consensus in the reality of anthropogenic global warming.

Over the years, both sides have accused each other of politicising the debate for personal gain. Schellnhuber maintains that although he is an advisor to Merkel (both have PhDs in theoretical physics), he is not a “horse whisperer to the chancellor” and has little impact on the political process. “People think I’m powerful and therefore dangerous, but I’m just a scholar who informs whoever wants to listen about the findings that are on the table,” he says.

The question of politicisation came to the fore in late 2009 when a tranche of hacked emails from the University of East Anglia’s Climate Research Unit was published online. The emails suggested that scientists at the university had been withholding or manipulating data. Although those involved have since been exonerated from wrongdoing by various investigative panels in the UK, the lack of transparency is a charge that has stuck. It is unclear whether the “Climategate” affair – which Schellnhuber describes as an “ingenious invention by the Sunday Times” – has dented public faith in the reality of climate change and polls on both sides of the Atlantic vary in their results.

For Schellnhuber, however, there is little that the relentless hum of the global warming denial machine can do to further erode public interest in climate change. The public is either bored of the issue or reluctant to confront the realities of global warming, which demand a dramatic change in lifestyle, he says. “Many American citizens take great effort not to believe in it because it threatens their way of life, based on overusing resources,” he explains. “It’s such a convenient life and we’re telling such an inconvenient truth.” Schellnhuber describes climate scientists as “planetary ratings agencies” who must continue to speak out. “In the same way that no one wants to listen to credit ratings agencies, nobody wants to listen to us,” he says. “But by assessing the facts of the Earth’s system, we serve as crucial reality checkers. We have to put our fingers into the wound.”