Where do you stand on Europe?

‘Blätter’ predicts a politicization of the Europe question; ‘Merkur’ argues that dominant theories of populism reaffirm liberal certainties; ‘Samtiden’ looks at tensions in Norway between town and country; ‘Host’ discusses women’s role in Charter ’77; and ‘Res Publica Nowa’ returns to the political life and thought of Leszek Kołakowski.

In Blätter, Ulrike Guérot pours water on the hype around the new Franco-German initiative for European integration. Emmanuel Macron’s proposals for financial and economic integration have indeed received positive signals from the new German government. Yet Macron’s ideas are nothing that were not already laid out in the Five Presidents’ Report on ‘Completing Europe’s Economic and Monetary Union’ from 2012 – whose delayed and diluted implementation Germany is largely to blame for.

The CDU, in particular, needs to ask whether it is still a pro-European party, writes Guérot. Even though Germany was involved in developing and promoting demands for eurozone reform, anyone who still supports them in the CDU is considered ‘leftwing’ or as betraying ‘national interests’. Not that this shift is peculiar to German conservatism: the Dutch prime minster Mark Rutte and the Austrian chancellor Sebastian Kurz also take ‘more or less subtle pro-national positions’.

Macron indeed has big plans for Europe, above all when it comes to strengthening the EU parliament. Guérot argues that he must take advantage of the increasing split on the European Left between a national and a cosmopolitan current and attract social democrats, greens and left-liberals. ‘One thing is for sure: the question “Where do you stand on Europe?” has the potential to make or break almost every party at both the national and the European levels.’

Austria: After its first hundred days, Austria’s new rightwing coalition government is coming into focus. Social cuts hitting the poorest end of the society plus a national re-orientation of cultural policy are its major trademarks so far. Despite the demonstrative show of unity, cracks in the coalition are already showing, reports Raphaela Tiefenbacher.

Socialism today: Retrospectives of 1968 tend to dismiss its socialism and instead to see identity politics as its primary legacy. Rightly so? Claus Leggewie asks how far the New Left achieved its political goals and whether identity politics were necessarily incompatible with its anti-capitalist and social-revolutionary agenda. 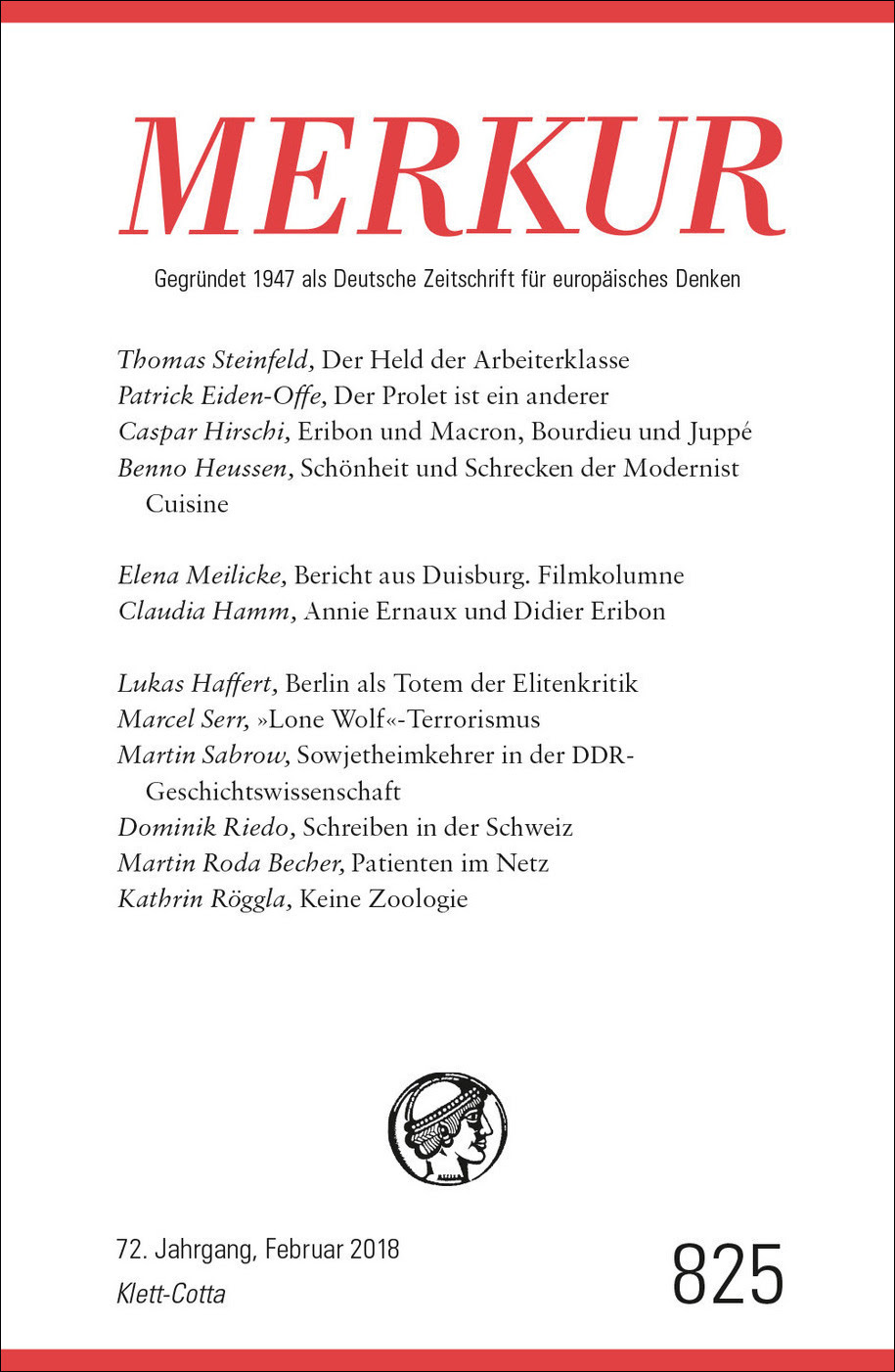 Current debates on populism often give the impression that it is the upper classes expressing disgust at the lower classes for not voting the way they were told, writes political scientist Philip Manow in Merkur. So, should we do away with elections, as some suggest? Or simply exclude the idiots? ‘Sometimes one wonders who exactly is going mad here – the populists or a self-identifying liberal milieu.’

The consensus opinion is that populism is about form and not content and that, as Jan-Werner Müller has argued, its defining feature is its claim to speak exclusively on behalf of the people. However, the implication: ‘come back when you’ve stopped foaming at the mouth’ is primarily a way of reaffirming bourgeois certainties and replicates the populists’ discursive strategies of exclusion. Manow argues instead for an analysis of populism that takes into account its variance between left and right – variance that is systematic and not coincidental.

Southern European, leftwing populism is a reaction to the imposition of fiscal discipline on eurozone states that, faced with economic stagnation, would otherwise have opted for demand-side solutions. Northern European, rightwing populism, on the other hand, is a response to loss of sovereignty over national borders and its consequences for redistribution. The eastern European countries fall into the latter category, while supporting intra-European migration, from which they benefit. In the East, too, ‘the common market produces losers of globalization – and it is these people who vote for PiS, Fidesz, etc.’

Translation: Claudia Hamm, translator and theatre director, writes on the almost possessive relationship of the literary translator to the translated work and expresses her frustration at the tendency for translators to be overlooked in public readings of literature in translation, in favour of professional actors whose approach to prose is essentially different to that of the novelist-translator. 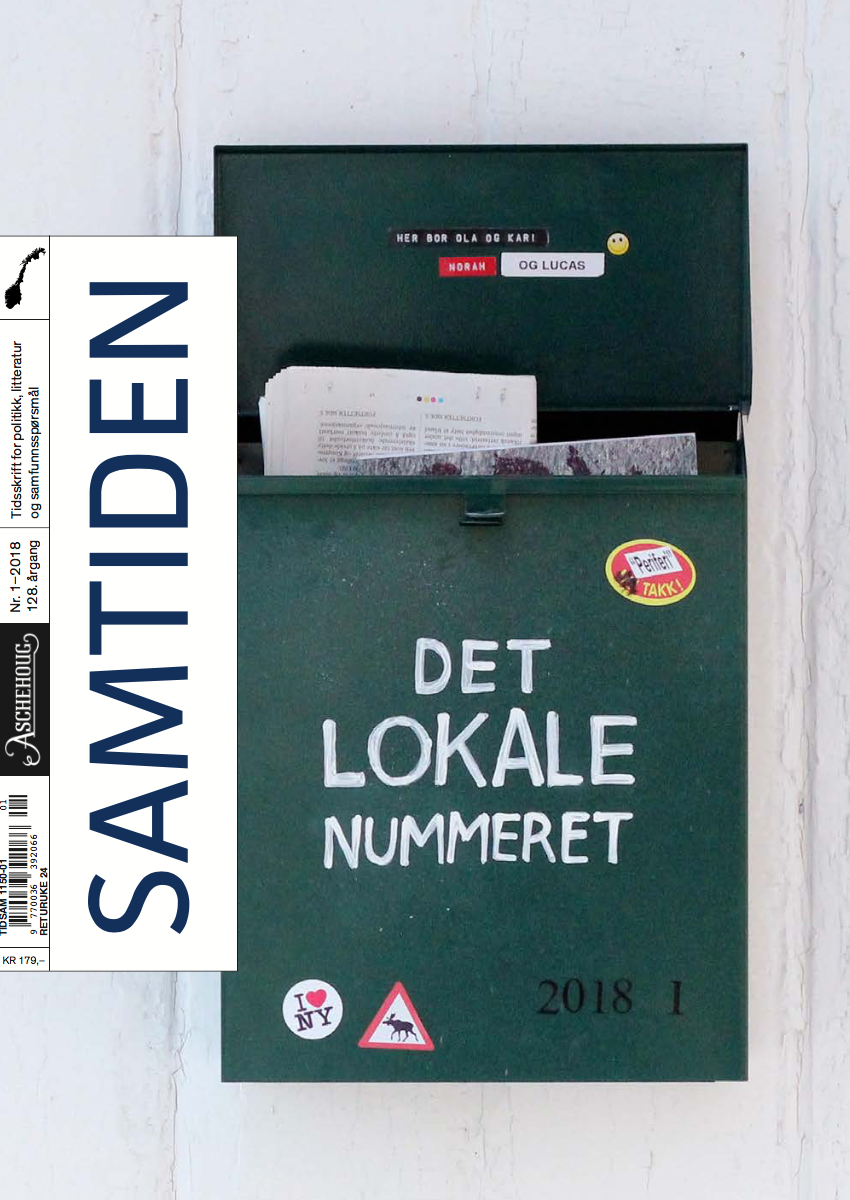 Contributors to a ‘local’ issue of Samtiden stick to a Norwegian brief but describe all too recognizable tensions between communities, central government and devolved regional administrations, and between effective economic management and environmental sustainability.

Us and them: Editor Christian Kjelstrup interviews British writer David Goodhart about his concept of the divide between people rooted in a locality – the somewheres – and those who benefit from an increasingly borderless world, the anywheres. Resentful somewheres are driving ‘post-liberal’ policies – manifestations of the ‘smouldering identity politics of white inhabitants’. Anywheres, suggests Goodhart, ‘should demonstrate more social intelligence in their confrontations with their political opponents and practice some of the pluralism they’re so keen on’.

Town and country: Political scientist Hilde Gunn Slottemo discusses balances of power between a city-based political elite and regional decision-makers in Norway’s local kommuner. The Centre Party, once the Farmer’s Party and ‘despised in the cities’, is now a major opposition party ‘not just because it is anti-centralization and populist’. Its leadership has sided with the ‘peripheral’ elite of wealthy land-based interests. Slottemo argues that its continued success requires ‘first, that the centre-periphery dimension becomes a public issue’ and ‘secondly, that the party is seen to own anti-centralization’.

Conservationism: ‘From where I am, in an Oslo suburb, I observe that economic interests rather than knowledge control the management of our countryside’, reflects Ragna Kronstad. Land-based capital interests have disproportionate political clout, she argues, referring to the wolf management debate: ‘My suburb could do with some wolves. Gangs of criminal youths is all we have.’ 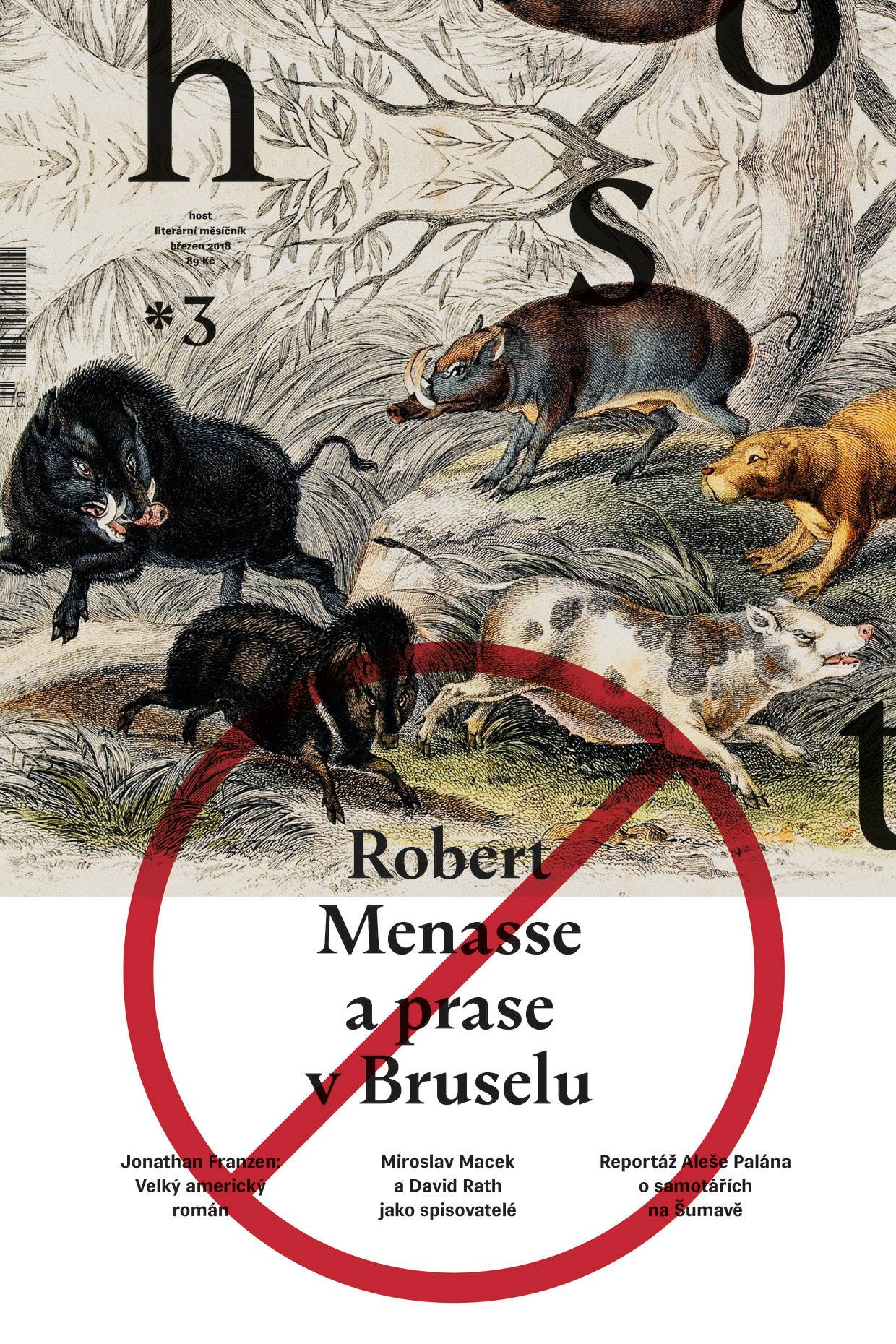 Host reviews two new books on the role of women in Charter ’77. In Bytová revolta: Jak ženy dělaly disent (‘The living-room resistance: How women participated in dissent’), twenty-one women – among them the singer Marta Kubišová, the writer Eva Kantůrková and the journalist Eda Kriseová – talk about their lives before and after signing the Charter. They recall the persecution that followed this watershed decision, which in addition to interrogations and detentions was often misogynistic. Each interview concludes with an assessment of the political situation in the Czech Republic today and the under-representation of women in politics.

Petra Kožušníková praises the framing of these women’s stories within the prevailing macho culture of the time. The book, she writes, shows ‘the depth to which their resistance activities were engrained into everyday life, as women juggled with caring for the family and often having a day job. It was this that constituted their often grubby, bleary-eyed, everyday heroism.’ Kožušníková compares the book’s antiheroic perspective with Svetlana Alexievich’s The Unwomanly Face of War: ‘both speak to the quiet, genuinely human and courageous actions of women, often little known to the general public’.

Denisa Nečasová reviews Michal Vodrážka’s Rozumí české ženy vlastní historii? (‘Do women understand their own history?). The book looks at the politician and feminist Milada Horáková, executed in 1950 in one of the first communist show trials, as well as the impact of totalitarianism on the women’s movement and the renewal of gender activism after 1989. Nečasová disagrees with the author’s rejection of gender revisionism, wondering if he ‘is incapable of understanding the writing of those he is critiquing’ and suggests he is too tied to the theory of totalitarianism.

Children’s classics: Radek Malý welcomes a new edition of Lewis Carroll’s Alice’s Adventures in Wonderland and Through the Looking Glass, in Jaroslav Císař’s pre-war Czech translation with new illustrations by the surrealist filmmaker Jan Švankmajer. ‘While Carroll speaks directly to children, Jan Švankmajer insists that our enduring fascination with Alice is proof that there is no such thing as art specifically for children: that is just a commercial trick. He sees the text as a record of dream visions without an educational dimension, a feature that distinguishes it from the fairy tale.’ 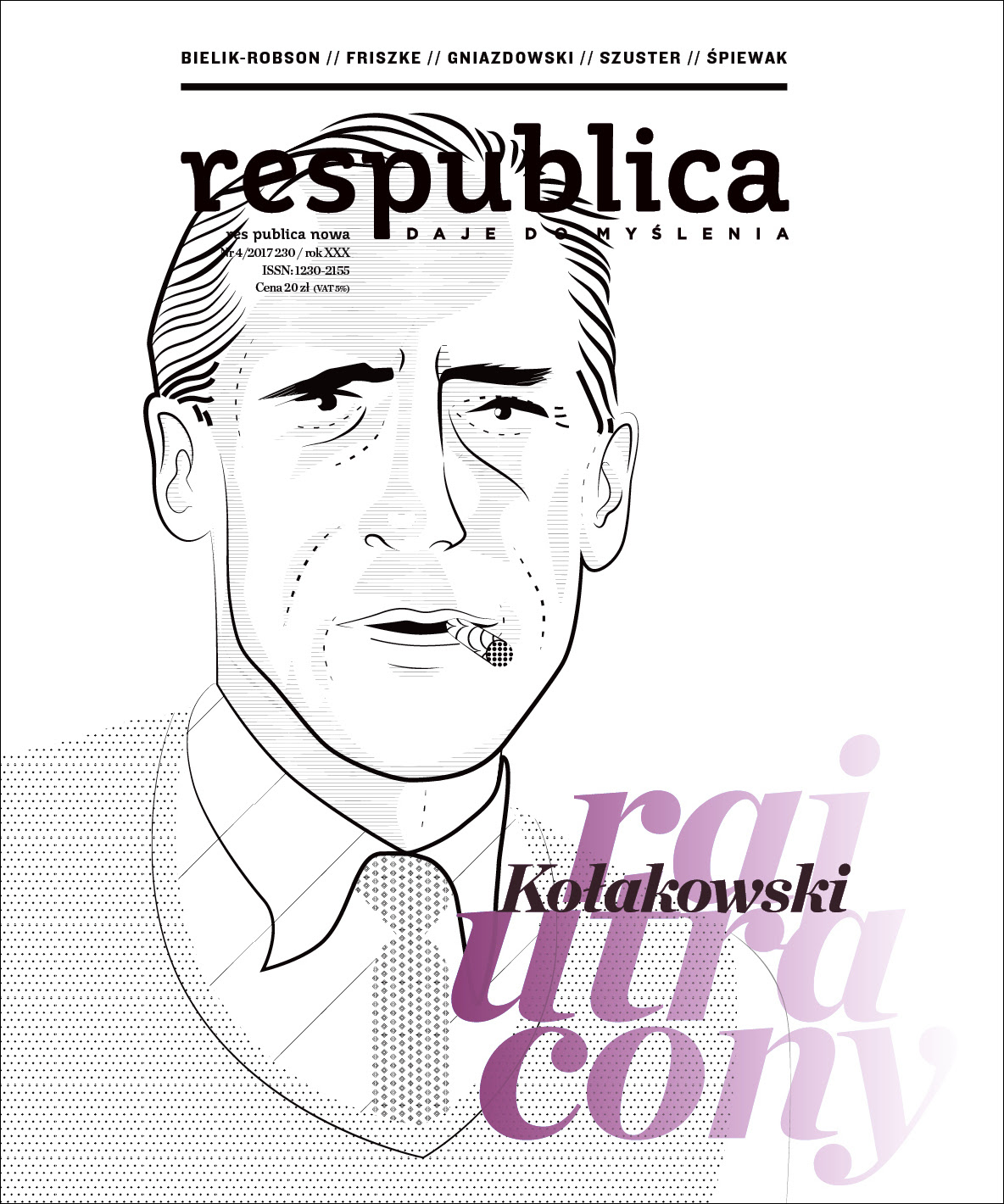 Res Publica Nowa devotes a bilingual issue to a series of articles and conversations on Leszek Kołakowski, Poland’s foremost twentieth century philosopher. Wiesław Chudoba describes Kołakowski’s life and intellectual journey, marked by the early tragedy of witnessing the annihilation of the Warsaw Ghetto and the execution of his father by the Gestapo in 1943. At first a committed Marxist, Kołakowski’s experience of real communism prompted him to re-examine his position after 1956 and he was soon backing other revisionists in academia, including the dissident Marxist students Jacek Kuron and Karol Modzelewski during their trial.

The limits of revision: In 1968, Kołakowski left Poland and soon afterwards published his definitive critique of the creed he had forsaken, Main Currents of Marxism. According to historian Andrzej Friszke, this work ‘essentially marks an end of Marxism being a centre of intellectual interest in Poland’. Kołakowski had become one of the regime’s biggest problems. Asked by interviewer Tadeusz Koczanowicz what Kołakowski’s influence was on the members of the Polish democratic opposition in the 70s, Friszke is stark: ‘It was absolutely fundamental.’

At the same time, Kołakowski was making a spiritual journey. In the 1980s, Friszke notes, Kołakowski ‘met Pope John Paul II in Castel Gandolfo … He seemed to come to a conclusion that unless we positively and carefully reconsider the issue of timeless values coming from the godly absolute, our civilization will be doomed. He wanted to come back to analyzing God in a deep, philosophical sense.’

Kołakowski in interview: The issue ends with an interview with Kołakowski himself, conducted in 1988 by Res Publica co-founder Paweł Spiewak. Asked where he stood on socialism, the philosopher replied: ‘I believe that the idea of human brotherhood, although unrealistic, is necessary for us as a guiding light. However, when we convince ourselves that we have an institutional method to implement it, then we become advocates of tyranny.’