Beyond fact-checking obviously false claims, of what use can professional historians be to society? In an age of denialism, one has to embrace history’s political potentials instead of reducing them to the task of safekeeping facts.

In early November, a report to the United Nations written by Christian Schmidt, the high representative for Bosnia and Herzegovina, was leaked to the press. In it, Schmidt warned that the country was in danger of falling apart, with a ‘very real’ prospect for a renewed civil war waged by armed Serb separatists. In the days after, as news about an impending threat of war in Bosnia spread, I received a few media inquiries asking if I, as a historian of the Balkans, could write a short piece explaining the roots of the current crisis.

I certainly could have drafted such a piece – but I couldn’t shake a sense of unease about the roles that historians are often asked to play in such cases.

Typically, the kind of historical ‘explainer’ that is sought when a long-ignored place hits the news – be it Bosnia, Sudan, Nagorno-Karabakh – is a mix of myth-busting and basic information about that land.

But the more I thought about postwar Bosnia, the more interested I became in the limitations of such short pieces.

How useful is it to try to provide ‘deeper’ historical explanations of conflicts that have largely shallow political roots? And while historians tend to excel at fact-checking, is it really the best – or only – defense that they can wield against state-sponsored narratives founded on deliberate lies?

One is forced to confront such questions when examining the history of Republika Srpska, the autonomous Bosnian entity at the heart of the current crisis in Bosnia. Its current leader, Milorad Dodik, has escalated threats that he will create a new military force and secede from Bosnia, thus plunging the country and the former Yugoslav region back into armed conflict.

Republika Srpska itself is a recent political creation. It dates back to 1992, when hardline Bosnian Serb nationalists led by Radovan Karadzic and Ratko Mladic seized on Yugoslavia’s dissolution as their chance to establish an ethnically pure nation-state. Backed by Slobodan Milosevic and the remnants of the Yugoslav National Army, the founders of Republika Srpska pursued their radical aim with abandon, targeting the elimination of non-Serbs (primarily Bosniaks and Croats) from the territory that they seized during the three years of war that followed, from 1992 through 1995.

Karadzic and Mladic failed, and the founders of Republika Srpska were later convicted in the Hague on charges of crimes against humanity and genocide.

But according to the terms of the 1995 Dayton Peace Agreement, Republika Srpska survived, and was given the status of an autonomous entity within the independent state of Bosnia-Herzegovina (the other entity being the state composed of federated cantons).

Today, more than twenty years after the war, Republika Srpska is led by Milorad Dodik, a blustery politician who portrays himself as the guardian of this wartime legacy. Though initially portrayed as an alternative to Karadzic, Dodik has become adamant in denying that the Republika Srpska founders committed genocide and claiming that the entity will soon form its own army, treasury, and other institutions. Russia’s Putin and Serbia’s Vučić have embraced Dodik as a regional ally, condoning his threats of secession. 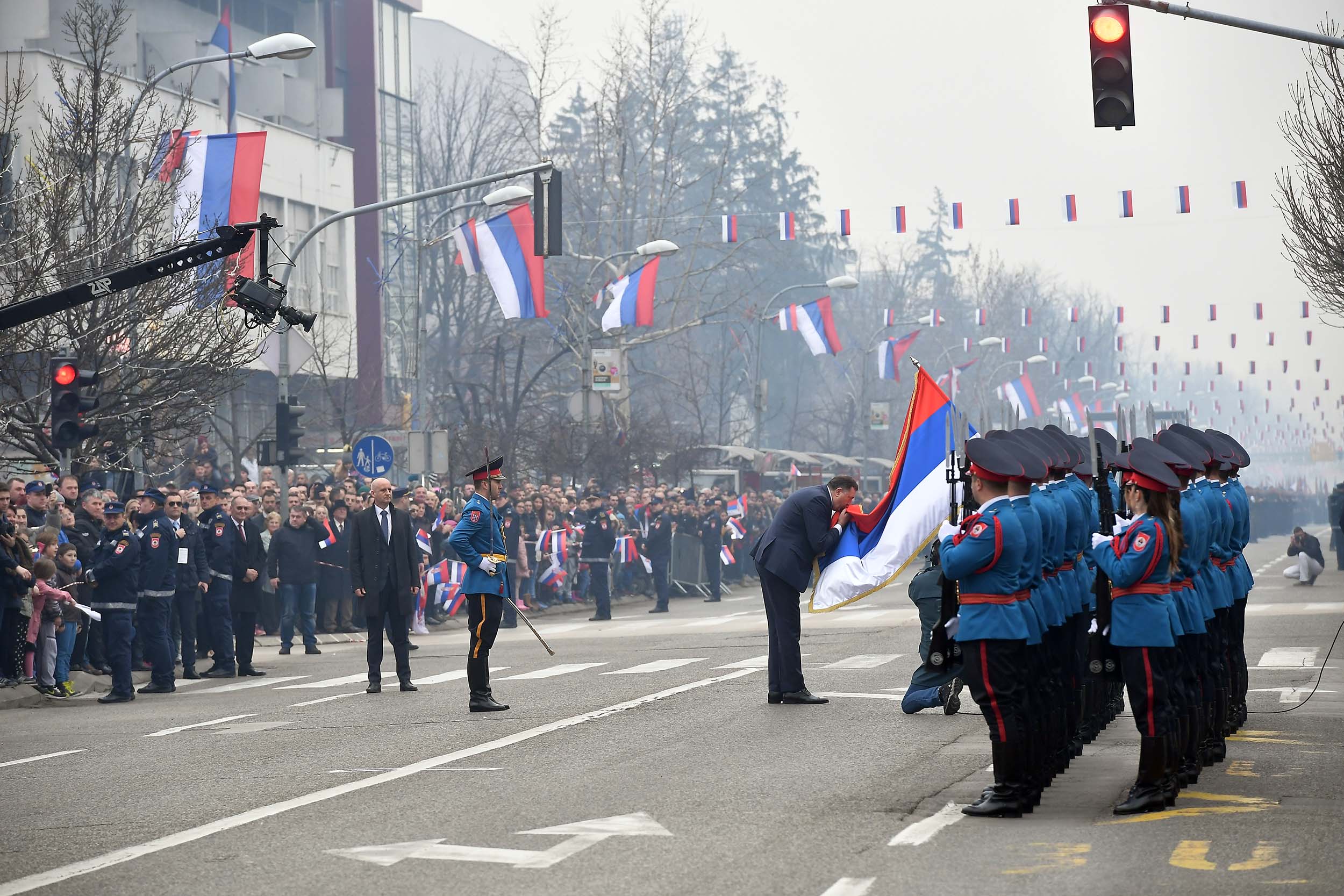 Milorad Dodik kissing the flag of Republika Srpska at the Republic Day parade in Banja Luka in 2018. Photo from Wikipedia.

Dodik’s nationalist project also entails rewriting and ‘deepening’ Republika Srpska’s history. When one consults the lavishly government-funded ‘Encyclopedia of Republika Srpska’ – a series of more than a dozen volumes was announced, but thus far only three tomes have appeared – one encounters contorted claims that this entity has a long and glorious past stretching back to the Middle Ages and late antiquity.

Asking historians to dig deep into such history can feel a bit like sending a scuba-diving team into a bathtub – but that demand is precisely what politicians do when they mobilize historians to furnish particular narratives, a task which some scholars take up, whether from pressure, conviction, or opportunity to be close to power.

When confronted with nationalist fabrications of an imaginary past, historians often turn to some of their favourite tools: fact-checking and myth-busting. Faced with misleading claims about history, historians excel at pointing out the fallacies, distortions, and ahistorical misunderstandings that underpin such assertions. This kind of work remains one of the most valuable functions of the historical discipline. Historians have the power to expose falsehoods, establish more accurate accounts, and open up a variety of evidence-based approaches to studying the past.

But how far can fact-checking correctives really go when confronted with political regimes determined to create their own narratives of the past, however fanciful?

In the case of Republika Srpska, it is clear that politicians like Dodik know the uncomfortable truth about recent events. As recently as 2007, Dodik himself acknowledged that ‘genocide was committed in Srebrenica’ by the armed forces of Republika Srpska.

Shortly afterwards, Dodik decided that whipping up nationalist pride better served his political ambitions. He began to invoke spectral threats of an Islamic conspiracy against ‘the Serbs’ and ‘Christian Europe’ while denying that Republika Srpska founders systematically targeted Bosnian Muslims and Croats in the 1990s. ‘There was no genocide’ became the refrain that Dodik repeated in press conferences and rallies year after year. In 2017, the Republika Srpska government banned teaching about subjects like the bloody sieges of Sarajevo and Srebrenica in the 1990s.

International and domestic protests did little to curtail Republika Srpska’s offensive. Efforts to engage with proponents of ‘soft denial’, which begin by acknowledging some crimes but dispute the label of genocide, led only to a continual shifting of definitions until the narrative of ‘hard denial’ once again predominated.

And such debates exacted a harsh toll in postwar Bosnia. The rehabilitation of convicted war criminals and relativization of their crimes in the autonomous entity retraumatized survivors and victims’ families by negating their experiences. By justifying past violence, denialist discourses also made the threats of renewed violence more credible and ubiquitous, especially as Dodik ramped up talk about creating his own military.

The problem eventually grew so severe that a new law prohibiting genocide denial was imposed in July 2021 by Valentin Inzko, the top official in charge of the civilian implementation of the Dayton agreement in Bosnia. Though the law generally banned genocide denial of any sort, it was widely understood to be a long-overdue move against Dodik.

In turn, Dodik’s escalating threats were in no small part driven by his refusal to comply with the new genocide denial law; instead, he asserted, Republika Srpska would seek de facto independence, which would guarantee its freedom to create a past and future detached from facts.

Though operating in profoundly different contexts, similar denial-empowered forces are now ascendant in many countries, including the United States. After instigating a moral panic around the spectre of ‘critical race theory’, Republican politicians in 20 US states have recently persuaded their state’s legislature to ban the teaching of ‘divisive subjects’ in American history.

American historians are scrambling to respond to this legislative onslaught, which is in effect tantamount to a state-mandated denial of foundational aspects of American history. In June, 2021, an open letter jointly signed by 135 scholarly associations protested that the clear goal of such laws ‘is to suppress teaching and learning about the role of racism in the history of the United States’. In August 2021, the president of the American Historical Association, Jacqueline Jones, published a compelling essay summarizing the key patterns in the history of anti-Black racism in the United States, but also explaining what critical race theory is and is not.

But worthy though such fact-checking correctives are, they are no match for politicians who can pass laws banning teachers from teaching true facts about the past.

Moreover, rushing to disprove denialist claims – let’s say by first naming falsehoods and then correcting them – runs the risk of recognizing them as a legitimate starting point for historical analysis rather than a political project deliberately positioned outside the empirical foundations assumed by most historians.

Recognizing these dynamics as problems of power challenges the widely assumed notion of history as an ideally impartial field of inquiry that works best when it is detached from politics.

That ideal is shared by Hannah Arendt, who brilliantly explored how lying and deception work in modern politics, but whose analysis assumed that the pursuit of truth – including the work of historians and fact-checkers – should ultimately be an impartial and mostly solitary venture.

‘To look upon politics from the perspective of truth,’ Arendt argued, ‘means to take one’s stand outside the political realm. This standpoint is the standpoint of the truthteller, who forfeits his position … if he tries to interfere directly in human affairs and to speak the language of persuasion or of violence.’

But the historical craft inevitably intervenes in and indeed springs from human affairs. This fact leads Arendt to be suspicious of ‘the historian as well as the politician’ because ‘they will be tempted to fit their reality – which, after all, was man-made to begin with and thus could have been otherwise – into their theory, thus mentally getting rid of its disconcerting contingency.’

Our age, rife as it is with denialist projects, opens an opportunity for a different view: one that embraces history’s inherent and multiple political potentials instead of minimizes them to the task of safekeeping facts.

Faced with powerful forces that are rewriting the past, historians should rethink their assumptions and pose new questions about the relationship between power and their discipline.

What communal and institutional venues could help fight disinformation and pave the way for more honest public reckonings with unsettling pasts?

Of what use can professional historians be to society?

I don’t have clear-cut answers to these questions. But I think that expanding the debate around the relationship between politics and history could put historians in a better position to fight against the ascendant forces of denial, whether in Bosnia or in the United States.

Arendt is right to emphasize both the unnerving fragility of facts as well as their quiet resilience. For this dangerous tension threatening at every turn to slide into the realm of lies, she concludes, ‘there is no remedy’.

But that only makes the multiple struggles for truth-telling all the more necessary. If the ongoing crisis in Bosnia is any guide, it shows that fighting against resurgent denialist projects remains a risky and unsettled process – and one that should prompt broad critical reflection.

Guilty secrets hide culpability. And, when the responsibility for crimes against humanity lies shamefully buried, injustice prevails. Authors Serhii Plokhy and Philippe Sands discuss their approaches to uncovering the truth behind Nazi and Soviet war crimes and the Chernobyl disaster.