Drought, floods and tropical night syndrome: the 2020 drought killed all crops in Bessarabia and the deepest Ukrainian lake is drying out rapidly, while the Black Sea could rise by 50 cm, displacing ¾ million people. Ukraine faces climate change already and Mariana Verbovska offers snapshots of the impacts and the efforts to mitigate them.

Instability has been the main sign of climate change in Ukraine in recent years. Both winters and summers have been characterized by abrupt changes in weather and temperature fluctuations. Severe frost, sudden warming or months without precipitation are followed by incessant rain. Gradually, the seasons simply lose their meaning.

Moreover, with 57% of the country consisting of arable land used for growing crops, Ukrainians have one of the highest rates of ploughing in the world. Therefore, the importance of adapting to climate change cannot be overstated.

Despite the fact that Ukraine was one of the first in Europe to ratify the Paris Agreement, it is still too early to talk about ambitious goals for adapting and reducing emissions. Nevertheless, 2020 brought promising news: five years after a historic agreement was reached in Paris, an ambitious decision was announced in Kyiv, namely the launch of a National Strategy for Adaptation to Climate Change with the support of the United Nations and the European Union. The programme will run until 2030.

During the first meeting of the Climate Change Adaptation Working Group in Kyiv (November, 2020), Iryna Stavchuk, Deputy Minister of Energy and Environmental Protection of Ukraine, said that the Ministry of Environment, the World Bank and a number of research institutes have launched a detailed study of the impacts of climate change on Ukraine by 2030 based on various emissions scenarios by the UN’s Intergovernmental Panel on Climate Change.

In a press release by the United Nations Development Programme in Ukraine, Stavchuk noted the following: ‘The data obtained is the foundation for long-term and regional forecasts by industry, and will provide an opportunity to build up a response plan that will form the basis for developing a National Adaptation Strategy’.

In the following sections, I offer brief snapshots of the impacts of climate change in various parts of Ukraine.

In the spring of 2020, farmers there experienced record losses of winter crops, while drought in Bessarabia killed 100% of cereal crops. On 11 May, local farmer Vasyl Serdyuchenko committed suicide because of crop losses – his death marks a significant milestone in the discourse on climate change within the country.

Despite 2020’s drought, Odessa may also be impacted by sea levels rising due to climate change. According to the WWF, by 2050 the Black Sea could rise by 50 cm as a result of melting glaciers and the thermal expansion of water due to warmer temperatures, putting coastal houses at risk of damage or destruction.

Since Ukraine has one of the longest coastlines in Europe, the negative effects of rising sea level will jeopardize its coast. At the same time, people should prepare for sleep problems due to tropical night syndrome, when the temperature does not fall below 20 degrees Celsius throughout the night.

In their November 2018 study, the NGO Ecodia in cooperation with Ukrainian scientists presented unique insight on the impact of rising sea levels for Ukraine’s coastal areas. Before this study, Ukraine didn’t have research that demonstrated the possible implications of rising sea levels caused by climate change. The experts estimated that 75,000 people could become climate migrants, 34 Ukrainian cities could be partially flooded, and 62 villages along with 200,000 hectares of agricultural land might be flooded completely by 2100. 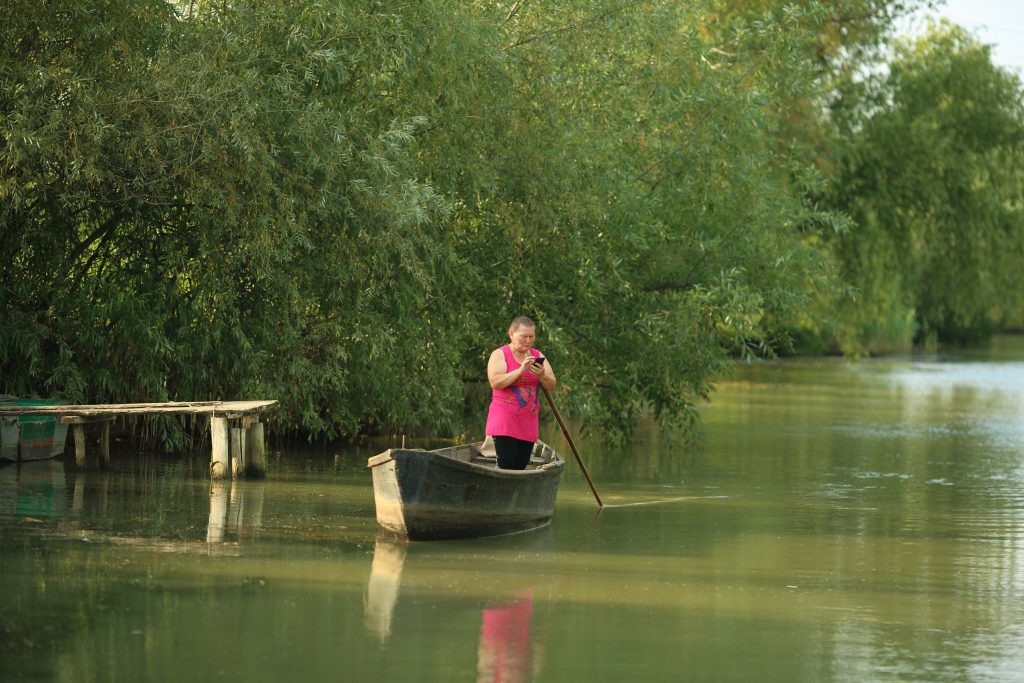 Sea level rise is especially dangerous for Vylkovo that is located directly in the Danube delta. by Maksym Balandyukh

Unique cultural and historical sites are at risk, too. ‘The projected flood zone may include historical and cultural heritage sites, including the Ancient City of Tauric Chersonese and its Chora, a UNESCO World Heritage Site. It is impossible to avoid these changes completely, but it is possible to prepare for them and minimize them,’ Ecodia experts say.

The study takes into account all of the coastal areas of southern Ukraine such as the Odesa, Khersonska, Mykolaivska, Zaporizka and Donetska regions as well as the Autonomous Republic of Crimea and the city of Sevastopol.

In the summer of 2019, Svitiaz, the deepest lake in Ukraine, began to dry up rapidly. By autumn, the shoreline had receded by up to 90 meters, with islands of sand appearing in the middle of the lake. The number of summer days with temperatures above 30 degrees Celsius continues to increase each year. In June 2019, the temperature was 4.6 degrees higher than the average temperature in June for the last 30 years.

‘There had been no signs of a change in the lake yet, but we already knew something was happening’, says Mariya Khrystetska, director of the Shatsk National Nature Park. ‘In June, the temperature was +40C. It lasted for several days. There was no precipitation. Before that, there was the winter and the spring with almost no precipitation’. 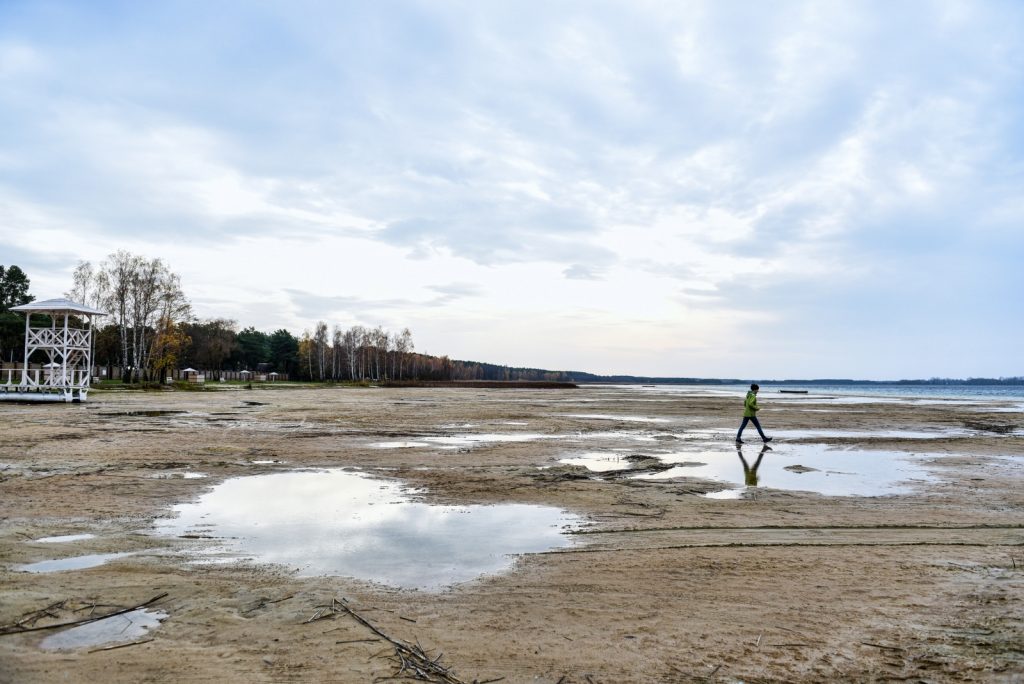 Shatsk National Nature Park, where Lake Svitiaz is located, is one of the largest in Ukraine, receiving more tourists than any other in the country. All life in the park is linked with the water levels of surrounding lakes, rivers, ponds, swamps and forests. Forests were the first to react to the violation of the hydro-regime, due to the diminishing groundwater.

On top of sea pollution, Istanbul faces a shortage of fresh water too, worsened by the warming climate.

At the same time, Anatoliy Smaliychuk, national coordinator of the Ukrainian-German project ‘Ecosystem Adaptation to Climate Change and Sustainable Regional Development through Empowering Ukrainian Biosphere Reserves’ believes that one of the most effective practical areas for adapting to climate change should be to preserve existing wetlands and restore drained peatlands as far as possible.

‘Another interesting point is that the increase in the frequency and duration of droughts has prompted locals, especially those working and earning in the tourism sector, to drill wells in their backyards’, said Anatoliy Smaliychuk.

In 2016, the head of the Roztocze Nature Reserve in the Lviv region could not understand what was happening to the local ecosystem. According to a report by Climate Forum East, the number of frogs decreased three times, pike and red crucian carp disappeared, beech and oak forests dried up, cranberries stopped ripening and flocks of black grouse did not fly. Beech forests, which need a lot of moisture, also began to change.

Almost 20% of Roztocze forests are beeches, which absorb water not only through the roots but also through the bark and trunk. Due to a lack of water, they began to dry up. Since 2015, fires here have increased by 50% and, according to meteorologists, the number of hot days, and hence fires, will increase further due to global climate change. 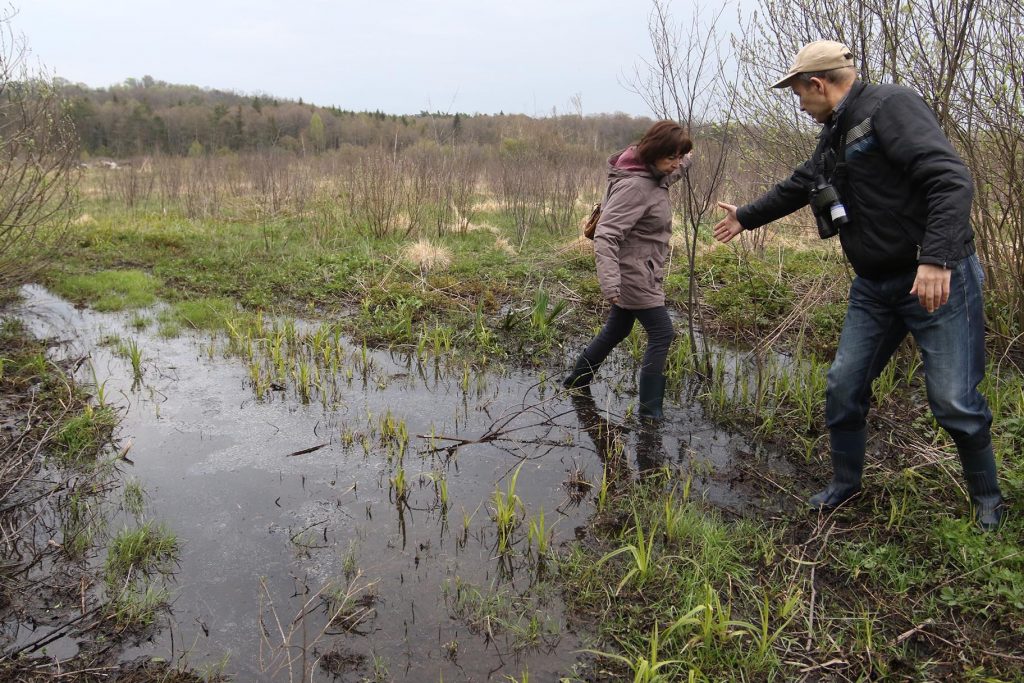 On the territory of swamp you can walk only in special footwear. By Roman Baluk

An additional reason for these changes is the draining of the local swamp, which occurred in the 1950s. The reserve is completely dependent on water, so when its amount decreased, everything began to change. Roztochia is part of the main European watershed, and it is here that the basins of the Black and Baltic Seas are formed. After a great deal of deliberation and calculation, local experts suggested that the reserve should artificially flood the area. The swamp was first flooded in 2017 for a grant received from the Austrian Red Cross. In 2020, the area received another flood grant from the German Michael Succow Foundation.

In addition to manmade efforts, local wildlife continues to make an impact. Beavers, for example, gnaw extra trees around the river and clear them of excess vegetation. Since it is strictly forbidden to cut down trees and even remove them from the territory in the reserve if they have fallen, the work of beavers cannot be overstated.

Without a doubt, ongoing climate change is bringing a new reality to Ukraine. As the cases of the Volyn, Lvivska and Odeska regions reveal, collaborative efforts at the national and local levels are needed in order to support vulnerable regions and to increase international commitments to stemming and reversing climate change and its impacts.