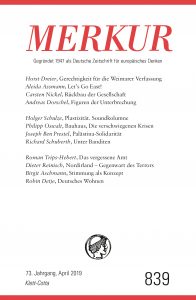 In their article ‘Explaining Eastern Europe: Imitation and Its Discontents’ (Journal of Democracy July 2018 / German translation Merkur January 2019), Ivan Krastev and Steven Holmes argue that ‘to understand the origins of today’s Central and East European illiberal revolution, we should look neither to ideology nor to economics, but instead to the pent-up animosity engendered by the centrality of mimesis in the reform processes launched in the East after 1989’.

In Merkur, Aleida Assmann sets out why she thinks this interpretation is not just wrong, but also ‘negligent’. First, it reinforces the myth of the ‘victorious West’. European unification did not begin in 1989, but with the Helsinki Declaration in 1975: ‘the moment when human rights were reactivated and rediscovered as a shared foundation of a new, enlarged Europe’. ‘It was not just the Americans who won the Cold War … but also the eastern European dissidents who invoked human rights and thus paved the way for the end of the East-West conflict.’

Second, by downplaying the ideological substance of the new anti-liberalism and attributing it instead to the ‘stubborn habit of nations’, Krastev and Holmes ‘misconstrue the doctrinaire core of the current shift. Everywhere today there are clear pronouncements of authoritarian chauvinism, paired with xenophobia’.

Third, the ‘narcissistic’ narrative of the ‘arrogant EU’ ‘ignores what might be able to build bridges and to mediate between East and West. It wouldn’t be half so brilliant, but perhaps more constructive, to strengthen the basic liberal compass, and to recall the huge investment of eastern neighbours who took part in the common project of Europe, instead of glossing over them and extinguishing them completely.’

Constitutional history: For post-war West German conservatives, the collapse of the Weimar Republic was the fault of Weimar Constitution and the liberal principles it enshrined. Only gradually, in the course of democratization, did this anti-liberal narrative weaken its hold. But old habits die hard – particularly in jurisprudence. On the centenary of the adoption of the Weimar Constitution, the myth of Weimar as ‘suicidal democracy’ seems finally to have been refuted, writes the jurist Horst Dreier:

‘In view of the first – though, in comparison to Weimar, weaker – signs of political instability and the rise of populist forces, the realization has begun to dawn that, without the agency of citizens, no constitution and no legal order in the world has the innate power to preserve and to protect the achievements of western democracies’. 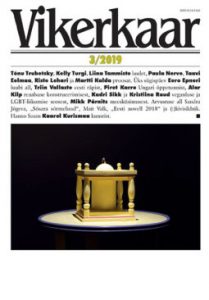 In turbulent times, Vikerkaar investigates social order and its discontents. In Hungary, ‘illiberal democracy’, now in its ninth year, has become the new normal. Increasingly, though, workers and students are showing their dissatisfaction with the Fidesz regime. Piret Karro reports from the front lines of anti-Fidesz demonstrations, describing the everyday toil of organizing in an environment where occasional victories are overshadowed by disillusionment. ‘It feels as if the right to protest has been left to the people as a way of managing dissent, so that the opposition can let off steam by taking to the streets, but does not dare do anything more radical.’

Normality: The sense of a troubling normality in patently abnormal times is, of course, familiar to many in eastern Europe. Starting with a photo of his grandmother playing volleyball on a late summer’s day, Eero Epner excavates the experience of everyday life on 12 September 1948, four years into the Soviet regime. Drawing on newspapers, archival sources and diaries, Epner describes people struggling to fulfil factory quotas, discussing guerrilla fighters hiding in the forests, watching sport, writing poetry and coping with death. Yet wartime experiences return to haunt people, and lead to new grievances:

‘“Who is going to help you,” one man may have wondered, “those sillies playing volleyball over there, why are they laughing, why are they laughing on this day, the 12 September 1948, can’t they see what’s going on, don’t they have a clue, are they blind, no, they won’t be of help,” thought the man, and knew that only he could save himself, has to save himself, has to write, has to submit an accusation, point the barrel at somebody else.’

Also: A survey of Estonian hip hop in the 1990s, its roots in social dissent and use of new technologies; a polemic entitled ‘What do men want? Who gives a f*ck?’ and a review of Peter Berger and Thoman Luckmann’s 1966 classic The Social Construction of Reality. 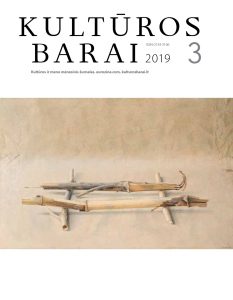 In Kultūros barai, Almantas Samalavičius welcomes the publication of the English translation of Lithuanian writer Ričardas Gavelis’s novel Memoirs of a Life Cut Short (Vagabond Voices, 2018). Gavelis’s work, he argues, has been widely ignored in Lithuania, not just in Soviet times but even now, almost three decades after independence. The explanation, according to Samalavičius, is that Gavelis (1950–2002) confronted Lithuanians with the uncomfortable question of ‘what sort of moral code we adhered to back then’, a question that has not gone away.

The novel, first published in Lithuanian in 1989, features a basically innocent and decent (anti-)hero who struggles and fails to negotiate his way in a totalitarian society during the Era of Stagnation under Brezhnev. Alongside Memoirs, Anglophone readers can read two more of Gavelis’s iconic novels: Vilnius Poker (first published in 2009 by Open Letter and republished in 2016 by Pica Pica Press) and Sun-Tzu’s Life in the Holy City of Vilnius, to be published this year by Pica Pica Press.

Memory: ‘If a wound is on the outside it is easy to notice it and treat it, but if it is in the head, then only thinking and rethinking will heal it,’ writes Rimantas Gučas. According to those preparing the law on the de-Sovietization of public space in Lithuania, it should be professionals taking decisions on heritage-related issues, and not politicians or business people using heritage for their own purposes under the banner of patriotism. Gučas warns against the zealous attempt to eradicate all symbols of Soviet occupation, a part of Lithuania’s history, in the naive belief that a Soviet-type mentality will then also disappear. 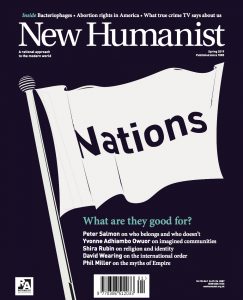 The number of deaths caused globally by antibiotic resistance is increasing at alarming speed. The problem is well known, writes Peter Forbes in New Humanist, but governments and the pharma industry appear not to take it seriously. In order to halt what is an inevitable process of antibiotic resistance, a new approach is needed. Enter bacteriophages, or ‘phages’, discovered in 1915 and thought to be the most abundant organism on earth. Used clinically for almost a century, particularly in the Soviet Union, these organisms could, in combination with CRISPR gene-editing techniques, be deployed as an alternative to antibiotics.

Technology: Giovanni Tiso explores how health apps enable ‘new forms of commercial exploitation, as well as new forms of discrimination against those whose bodies and habits are found wanting’. In the age of wearables, what counts as an averagely healthy body can not only be described anew, but also prescribed: ‘It is one thing when we choose to quantify ourselves; it is another to be compelled to in order to access a basic service such as life insurance.’

Nationalism: Intellectual historian Peter Salmon revisits Étienne Balibar’s notion of ‘fictive ethnicity’, which not only creates affiliation to a nation, but also excludes groups seen to threaten it from within. ‘We have arrived at a point which, Balibar argues, we have seen before: the moment where the exercise of power is not only “violent or powerful or brutal, but is also cruel”.’ 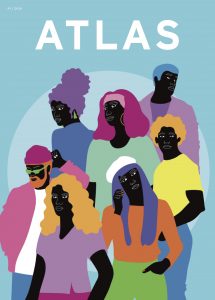 In Atlas, Sigrid Kraglund Adamsson wonders who ‘guards the guardians’ of Danish culture. Interviewing self-identifying ‘insiders’ and ‘outsiders’, she argues that access to cultural life, as a creator or a critic, is largely controlled by an exclusive group. Its unwritten norms, which include ‘being open and inclusive’, are effectively ‘territorial, as people guard their language and their offspring’. That language can be both pretentious and self-deprecating: ‘You may quote Nietzsche, but always with a smile. And be a snob, but in an unsnobbish way.’

Cynicism: Financial crises stripped the gloss off 1980s yuppie cynicism – ‘greed is good’ – but now it is fashionable again and more blatant than ever, argues Mikel Bækby Johansen in an essay discussing group arrogance based on wealth. ‘USA and Ronald Reagan won the Cold War. But Reagan’s political project created fertile ground for cynicism, which has grown steadily and, in January 2017, moved into the White House.’ Johansen focuses on the ’80s but finds alarming examples of exclusive entitlement in the English social system as well as in the Trump circle.

Normality: Jonathan West Carstensen’s interview with Japanese novelist Sayaka Murata focuses on the group think inherent in normality. Keiko, the protagonist in Murata’s widely-reviewed novel Convenience Store Woman, plans day by day how to conform to society’s expectations of ‘normal’. Murata agrees that the book ‘makes invisible social pressures on individuals alarmingly visible’, but points out that Keiko finds conformity reassuring: ‘Being a convenience store employee is a category in its own right that overrides both being a woman and being human.’