The emergence of a transnational people

The analysis of the violence connected to such events as the G8 meeting in Genoa or the EU meeting in Gothenburg cannot be isolated from its context, says Swedish sociologist Michael Carleheden. He identifies a problem that enters deeply into the structure of democracy and sees the emergence of a transnational people. When this political people is confronted with politicians and institutions representing particular and national interests the result is a deep crisis of legitimacy.

The discussion following the demonstrations and riots in Gothenburg and Genoa has been marked by moral indignation and disappointment instead of analysis. Very few people have asked themselves why it is that hundreds of thousands of people around the globe suddenly go out into the streets and demonstrate for the adoption of politics based on global justice and solidarity, not primarily self-interest. Few people have asked themselves why this particular type of demonstrations so often degenerates into violence and destruction. To stigmatise the assailants as thugs and hooligans does nothing to help illuminate the matter. Such labels signalise, on the one hand, a dislike for what has happened and, on the other, that at the end of the day, the assailants do not have to be taken seriously. A better strategy would be to ask why this type of violence is erupting right here and right now. This violence occurs in a specific context and therefore also has specific causes. To presume it to be down to mere foolishness or adolescent immaturity that can be overcome by strategic police cunning or training in non-violence oversimplifies matters. Quite to the contrary, the violence is an indication of a structural problem that increasingly characterises today’s globalised society.

Three specific circumstances need to be taken into account in order to direct the analysis onto the right track. Firstly, the violence we are discussing takes place in a political context. Even if some individuals may take part in it mainly to achieve some existential kicks, any analysis failing to acknowledge the political setting will reach false or superficial conclusions. Secondly, this political violence is directed at politicians who are appointed in national and democratic elections. Thirdly, we are dealing not with just any political context, but with aglobalone.

As to the first of these circumstances, let it suffice to say that social processes cannot be understood by their reduction to the psychology of specific individuals. Concerning the second circumstance, it is surprising that the public discussion on this new political violence is so rarely related to the ongoing debate on the crisis of democracy. Many have pointed out the fact that, while more and more countries around the world are being democratised in the formal sense of the word, the democratic decision processes have a tendency to lose political power and significance. It is well known that citizens today no longer participate through the traditional means of democratic politics – such as e.g. party membership and general elections – to the extent that they used to do. However, this decrease in engagement does not mean that people are losing their interest in politics. Rather, this phenomenon should be put down to the fact that the potential influence exercised upon the political system by way of traditional democratic channels has decreased. If it is true that the democratic institutions have become increasingly impenetrable as well as losing power and efficiency, it is hardly surprising that people are trying to find new ways to make a difference. In the light of such a line of argument, the new political violence should be regarded not as simple hooliganism but as the frustrated citizens’ protest against an increasingly shallow democracy. The less democracy functions, the greater the violence we can expect. The weak spot in the debate on the new political violence is thus that it takes it for granted that democracy more or less functions the way it should. 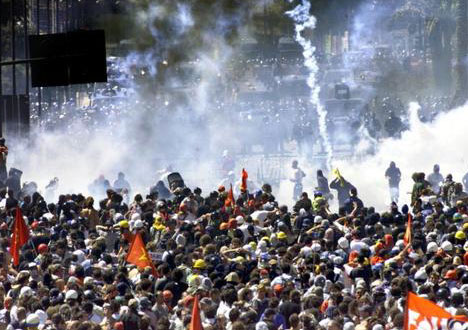 This analysis can be made more specific through the third circumstance. The modern form of democracy is inextricably intertwined with the nation state. Democratic institutions are confined to their national space. This means that, while the nations’ internal affairs have been dealt with in a more or less democratic way, the relations between nation states have been governed by the principle of “the right of the stronger” throughout the modern era. The main concern of the democratically elected representatives of the nation states has been to promote their particular national interest by any means at their disposal. Freedom, equality and solidarity have at best been a goal set for national, but never international, politics. While the post-war period did allow for the establishment of the UN, the non-democratic structure of the Security Council has meant that the UN been neutralised by national power politics.

This new political complex of problems presents an enormous challenge to existing democracy. To use the famous terminology of Robert A. Dahl, we seem to be facing a third democratic revolution. After the Greek democratic revolution and after the national democratic revolutions that started at the end of the 18th century we are now confronted by the need to develop transnational democratic institutions of some sort. It seems that we are at the beginning of a political process that looks just as vast and incalculable as those of the first and second revolutions must have seemed in their time. In such times of profound and historical change violence, serious misjudgements and errors from all parties are neither surprising nor difficult to explain. If we want to minimise the risk of an escalation of violence, we cannot be content with distance and condemnations, and old solutions won’t serve to solve these new problems. Rather, the first step must be a profound analysis of the causes that lie behind the violence. Until we have such an analysis, it will be difficult to avoid further misjudgements and faux pas. One such a serious mistake would be for politicians, in some kind of national democratic self-righteousness, to make themselves even more inaccessible to the new transnational movement. The more the politicians isolate themselves from this new political force, the more the violence will escalate.