With German-bashing now firmly established as a European Volkssport, Dublin Review of Books editor Enda O’Doherty turns to the semi-barbarous German language; only to find that in the right hands, or expressed through the right vocal cords, German is indeed a very beautiful language.

There are nations which are endlessly, perhaps inordinately, proud of their language (the English and the French in particular) and those who are a little less confident or who will attribute to their native tongue only one pre-eminent virtue, as the Italians, not it would seem unreasonably, have attributed musicality to the Tuscan dialect that, rather late in the historical scheme of things, became their national language (their first king couldn’t speak it; not that this is wholly unusual for royals – there were times in our neighbour’s history when the king’s English wasn’t so hot). 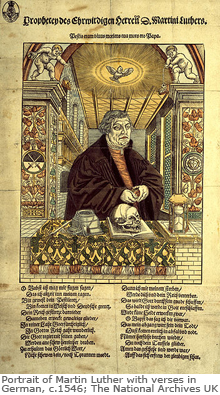 Germans have featured prominently among those who have sometimes had difficulty in believing that their native tongue is quite up to the mark, or, as we say in our barbarous contemporary jargon, fit for purpose. The German invention of printing in the mid-fifteenth century was certainly to give a boost to the prestige of vernacular languages (at the expense of the universal language, Latin). It was also to be important in spreading the new religion, Protestantism. Martin Luther enthused:

Printing is God’s most recent gift and his greatest. Through it, in effect, God wishes to make known the true religion to the whole world, right to the extremities of the Earth.

And so it came to pass. But the Whiggish Protestantism (still alive in the popular cultural histories of Lord Bragg, formerly Melvyn) which celebrates the unstoppable spread of the Word, to be read and chewed over by the individual in private – an improving substitute for the “nonsense” mumbled by the priest in an incomprehensible language – tends to forget that in the short term virtually no one could read, whereas all could see and grasp the meaning of the wall paintings, statues and altarpieces in the church, which the Protestants for the most part were so keen to efface or destroy. The short term in this context, we should remember, was rather long. Mass literacy came to England only in the nineteenth century.

Luther however, after his initial enthusiasm, seems to have had second thoughts about the wisdom of translating the Bible into German and making it available to everyone, or everyone who could read (he was to find, disturbingly, that they disagreed with him about what it meant).

What blood and water I have sweated translating the Prophets into the vulgar tongue! Good God, what a work it is and how many difficulties there are in forcing the Hebrew writers to speak German. Not wishing to give up their Hebraism they refuse to be poured into German barbarism. It’s as if the nightingale, deprived of its sweet melody, was forced to croak out the monotonous note of the cuckoo.

Luther, and Germanophiles, should perhaps take heart that this feeling of inferiority before the classical languages was felt even by francophones: Jean Calvin’s cousin, Pierre Robert Olivétan, who translated the Bible into French, even used the same image: the whole difficult business, he felt, was like teaching “the sweet nightingale to sing the song of the hoarse crow”.

German feelings of inferiority were not, however, to go away any time soon. Norbert Elias, a sociologist of Jewish origin born in Breslau (now Polish Wroclaw) in 1897, quotes in his 1939 work The Civilizing Process the words of the Prussian king Frederick the Great in his On German Literature (1780):

I find a language that is semi-barbarous and which is divided into as many dialects as Germany has provinces. And each believes its patois is the best.

Frederick does not attribute this sad state of affairs to the innate inferiority of the German people but rather to the huge devastation visited on the country by the Thirty Years War, from which it had never quite recovered (it had indeed been hugely wealthy and cultured in the early modern period).

Elias points out that the king was writing just a year before the appearance of very important works by Schiller, Kant and Goethe, but suggests that he would not necessarily have been moved by reading them since he was on a different aesthetic wavelength which attributed virtue only to elegance, classicism and the observance of the time-honoured (Greek) rules of composition, and found these pre-eminently in the works of French authors. If Goethe’s Götz von Berlichingen recalled Shakespeare, well so much the worse, for wasn’t Shakespeare really a rather low-class type of writer? Frederick wrote:

To convince you of the lack of taste which until our own days reigned in Germany you only have to look at the public theatre. There you’ll see the abominable plays of Shakespeare translated into our language and the entire audience swooning before these ridiculous farces worthy of the savages of Canada. I call them ridiculous because they offend against the rules of the Theatre. These rules are not arbitrary.

Here we have picklocks and gravediggers, who speak just as they ought to. And then we have princes and queens. How could this bizarre mixture of baseness and grandeur, of buffoonery and tragedy, affect or please us?

Frederick, and Frederick’s court, spoke French, as did much of upper class Europe at this time, to show that they were civilised people and not like their uncouth and unpolished subjects. But this wouldn’t last: German came into its own, though it still had its detractors (most amusingly the American humorist Mark Twain).

There are still those who think it an unattractive language, but one suspects that many of them have been too influenced by watching films in which the only German dialogue is “Halt!”, “Raus!” and “Papieren bitte!” A number of years ago I bought a set of CDs called Bildung, a sort of crib to European culture written by the academic Dietrich Schwanitz and spoken by the actor Matthias Ponnier. No one who listens to Ponnier’s wonderful voice (even, like myself, without fully understanding everything that is said) could be in any doubt that in the right hands – or expressed through the right vocal cords – German is indeed a very beautiful language.