Paralysed by predictable stand-offs between developing nations and the West, the Rio+20 Earth Summit failed to produce anything but vague commitments. Faced with the impossibility of consensus, governments and corporations opted for a go-it-alone approach. Reporting from Rio, Claudia Ciobanu discerns opportunities nonetheless.

At the Copenhagen climate conference in 2009 there were real hopes for an international agreement to keep global warming below 2 degrees Celsius, thus preventing catastrophic climate change. Negotiations lasted until the last minute, and they failed. Three years later, in Rio de Janeiro, there was little hope from the start. As predicted, the result is vague and the overall feeling is that the negotiations were over before they had even begun.

What was at stake in Rio? Why did 50,000 people come to the Brazilian capital last month? June 2012 was the twentieth anniversary of the first Rio conference (the Earth Summit), where world leaders set the basis for an international environmental protection system. Two decades later, a progress report was supposed to take place that would determine where the world stands in combating climate change and how effective the existing negotiation mechanisms are. The answer: we are doing badly, very badly. Some scientists claim that there is no longer any chance of keeping within the 2 degrees limit.

Unlike the Copenhagen summit, where the focus was on the climate, in Rio the theme was sustainable development. Negotiators attempted a more complex take on global problems by analysing their interconnections. Countries such as the Maldives or Bangladesh are already seeing their coastal areas flooded by oceanic waters, forcing populations living there to give up their lifestyles and move to the peripheries of big cities. At the same time, a billion people around the world suffer from chronic hunger. Among the hungry billion are those peasants from Bangladesh who, forced to move to the city, are unable to find work; among the starving are former farmers who, unable to predict weather patterns and plan their crops, can no longer work their lands. If small farmers no longer work their lands, dependency on unhealthy food produced by agribusinesses increases; the expansion of large scale industrial farming in turn leads to more pollutant emissions and more destructive effects on waters and soil.

The main theme of the Rio conference was how to continue developing while remaining within the natural limits of our planet: what kind of energy to use, how much to consume, how to distribute resources globally. This time, however, the old concept of sustainable development was replaced by a newer one, supported by rich countries and the business sector: “the green economy”. Behind the concept are two main premises: first, that there is an urgent need to green the global economy; second, that this must be achieved through the mechanisms of the market economy. 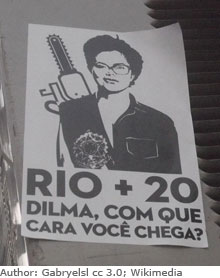 Strongly supported by Europeans (though less so by the United States, which remained rather quiet in Rio), the green economy was strongly criticised by both developing countries and civil society. For the developing countries, the concept is an imposition by the rich. This dynamic could have been predicted by anyone watching international negotiations on climate change since Copenhagen. Europe and the US simply no longer have enough power to swing international opinion. India, China, Brazil and other large developing countries matter a lot – without them, nothing can be agreed on. Moreover, these countries want to continue growing regardless of the state of the planet. If Europe and the US were allowed to pollute the planet for centuries, it is now the turn of other countries to do the same. Colonial history makes it even harder for westerners to dictate terms to the rest of the world. It was this dynamics that blocked a deal in Copenhagen. And it is this dynamics that, predictably enough, blocked a strong deal in Rio.

Civil society rejected the green economy for other reasons. According to most NGOs and indigenous groups present in Rio, the commodification of nature lies at the root of the green economy. The concept of “natural capital”, for example – a core element of the green economy vision – means pricing waters or trees. This approach is considered dangerous: if you can pay to pollute a river, what will prevent you from doing it? What kind of rights will people living off of that river have if polluting corporations are allowed to do whatever they want, as long as they pay a price considered to be correct? The critics of the green economy say that more straightforward mechanisms such as stricter regulation of pollution can produce better results than creating new markets for natural resources (in Europe, the carbon emissions market is far from being a success). Finally, in Marxist terms, critics argue that natural resources have become the new destination for international capital looking for new areas of expansion.

These criticism are valid. Yet the green economy need not mean the financialization of nature. The final Rio document is so vague that the green economy can mean anything, even something completely benign. In this lack of concreteness there lies not only a great danger, but also a great opportunity.

The future is open

The danger is that the powerful players will decide what the green economy means. In Rio, the official negotiations as well as sideline events organized by governments and corporations took place in the Rio Centre, on the southern beaches of the city. Civil society met at a completely separate location, at least two hours drive from the official summit, in the centre of the city – a poorer, more mixed area in comparison to the relatively luxurious south.

While civil society was criticizing the final Rio document, political leaders and corporations were launching voluntary initiatives. Many corporations referred to commitments they were making to green their businesses, including schemes to calculate and price their emissions. Welcome though it is that corporations recognize the need to protect the environment, it is highly problematic that they are left alone to act on the basis of commitments that they themselves make. Corporations are at least partly responsible for some of the major problems confronted the world today (including pollution and a broken food system) and they cannot be simply trusted to self-regulate efficiently. This is the danger: with a weak document, the powerful will decide what measures to take and how ambitious these measures are.

The opportunity comes from the positive things that can be achieved by governments, civil society and small companies, on the basis of the impulses, weak though they are, present in the final Rio agreement. When it comes to agriculture, for example, small farmers are strongly supported by the document, which recognises their potential as producers as well as in alleviating poverty. Encouraged by the Rio agreement, governments around the world are in a position to decide to redistribute financing from agribusinesses to small farmers.

Though deeply frustrated with the quality of the final document and the fact that they were not genuinely included in its negotiation, NGOs present in Rio nevertheless considered it to be an important moment for civil society. Connections were established between NGOs and other grassroots groups, as well as with governmental and economic actors. On the basis of these connections, interesting projects can be built.

Hope, if we look for it, is there. But the fact that the global balance of power is unfavourable to any meaningful international agreement, the fact that the final document was not seriously discussed with civil society, and the fact that, writing these words in the Rio Centre, I see around me only politicians and business representatives but no farmers or activists, makes me think that hope is slight.

At the end of the Rio conference, Achim Steiner, the general director of the United Nations Environment Programme, declared the following:

The outcome of Rio+20 will disappoint and frustrate many given the science, the day to day reality of often simply surviving as individuals and as families, the analysis of where development is currently heading for seven billion people and the inordinate opportunity for a different trajectory. However, if nations, companies, cities and communities can move forward on the positive elements of the Summit’s outcome it may assist in one day realizing the Future We Want.

It seems that we are being told that we’re on our own. Or, seen another way, that it’s up to us.