Projecting Poland and its past

Poland is at the centre of the debate on memory politics in Europe. Plans for a museum to commemorate the ‘Polocaust’ are the next part of Poland’s history project – but have prompted outrage in Israel. Konstanty Gebert reports on what it all means.

Have you heard of the Polocaust? The PR guru to Poland’s ruling party leader Jarosław Kaczyński is on a mission to make sure you do.

‘The Polish state does not have at its disposal an institution which would, similarly to Yad Vashem [the Holocaust museum in Israel], show the suffering which had befallen the Poles,’ laments Marek Kochan, PR advisor to Kaczyński, leader of Poland’s Law and Justice (PiS) party.

Kochan calls this suffering ‘the Polocaust’.

In an article published in the Warsaw daily Rzeczpospolita, Kochan argues that such a museum is necessary and can, and should, be built in one year. ‘We can invite Prime Minister Benjamin Netanyahu for the opening,’ he suggested. ‘The recent debate has shown that there is in Israel a deficit of knowledge about World War II, even among opinion-makers.’

He refers here to Israeli reactions to the recent passing by the Polish parliament of a law which would penalise, with up to three years in jail, anyone making ‘allegations that the Polish state or the Polish nation were responsible or co-responsible for the Nazi crimes of the German Third Reich’, among other things.

It generated outrage in Israel, where the memory of wartime betrayals committed by many Poles, alongside that of selfless help at the risk of their lives by others, is still alive. One of the first to react was Israeli opposition MP Yair Lapid, who tweeted: ‘I utterly condemn the new Polish law which attempts to deny Polish complicity in the Holocaust… There were Polish death camps and no law can ever change that.’

The Polish embassy tweeted in reply:

‘Your unsupportable claims show how badly Holocaust education is needed, even here in Israel.’ A furious Lapid, citing a grandmother allegedly ‘murdered in Poland by Germans and Poles’, demanded an apology. None was forthcoming, and matters went downhill from there.

While the polemic still rages, the Lapid exchange provides necessary background to Kochan’s seemingly extravagant proposal. The Israeli politician was entirely right in suggesting that the goal of the new law is to stifle debate about the scale of complicity of many Poles in the Holocaust (even the authorities do not deny individual cases of atrocities), and entirely and insultingly wrong in asserting the existence of ‘Polish death camps’. Poland and the Poles had nothing to do with the decision of German occupying authorities to build their camps on Polish soil, nor did they play any role in their operation. The fact that such an allegation can be made, many in Poland believe, is clear proof that the world ignores Polish history and Polish suffering, and needs to be educated about it.

In fact, it needs to learn that Poles, far from being responsible for the camps, were their victims (100,000 non-Jewish Poles were killed in Auschwitz alone). In all, of the six million – or 17% of the entire Polish population – exterminated in World War II, half were Polish Jews and half were non-Jewish Poles. 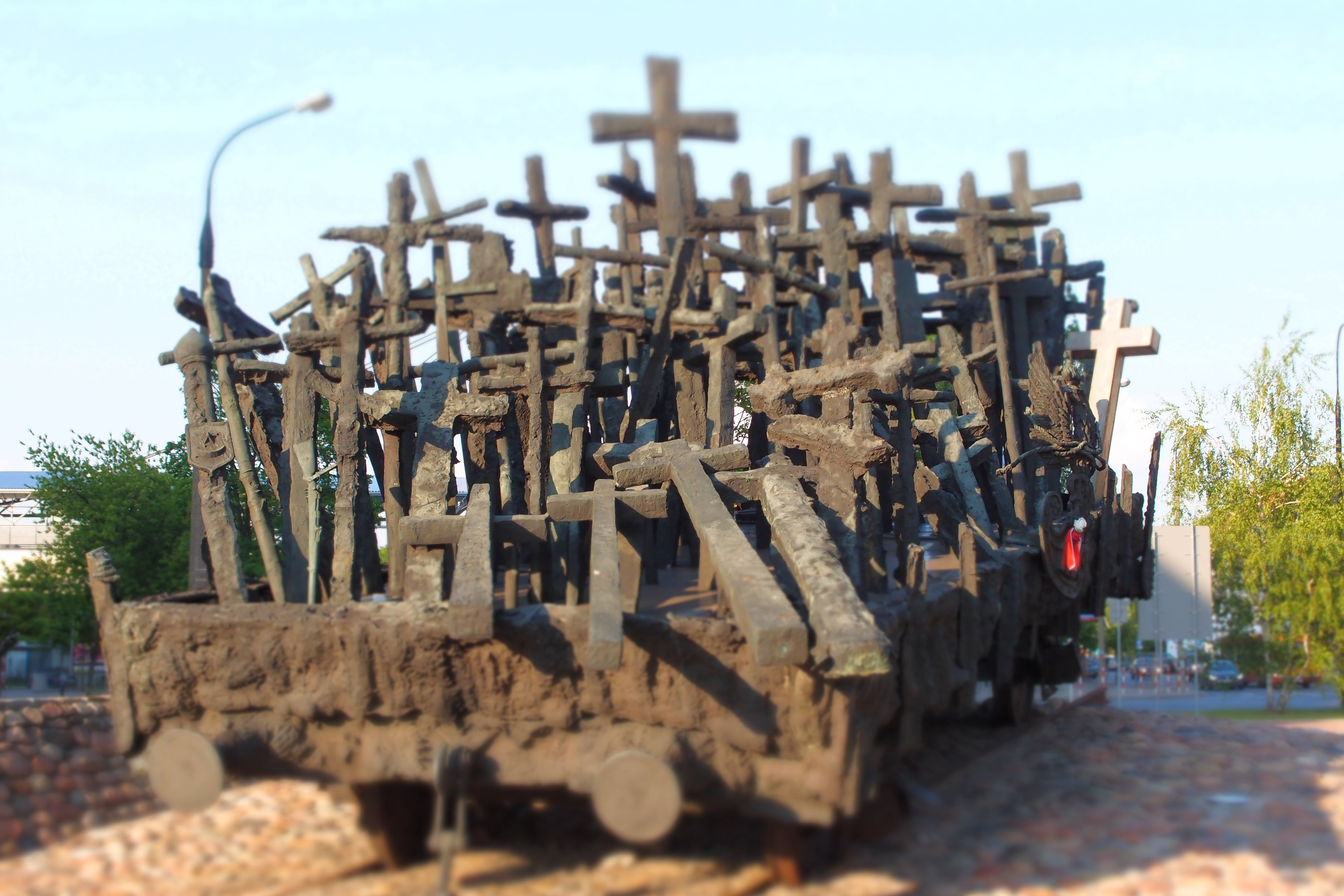 ‘Monument to the Fallen and Murdered in the East’ in Warsaw, Poland. Source: Flickr

But even if this is the case, does it matter?

Yes, say the advocates of this viewpoint. Once the world realises the scale of Polish suffering and heroism in World War II, it will not only stop slandering us the way Lapid did, but also realise we are a great and noble nation. Such nations deserve respect and gratitude, but also compensation: both in the political sense – our wartime allies have a duty to support us against Israeli slander, Russian threats and Ukrainian insolence (the issue of crimes against the Polish population in what is now Ukraine is another raw and sensitive issue) – and also financially. The right-wing government in power in Warsaw since 2015 says it intends to demand reparations from Germany for losses incurred in World War II, to the tune of hundreds of billions of dollars.

Arguments over the new Polish law have brought things to a boil, but wars of memory had been going on in Poland for some time.

The new Museum of the Second World War, in Gdańsk, was inaugurated last year. This in itself was a victory: the PiS minister of culture had, from the onset, announced that he considered the museum a disgrace, and wanted to dismiss its director and change the exhibition. He cited expert opinions he had commissioned, one of which complained that the museum ‘presents a too negative picture of the war’, meaning it did not sufficiently underscore the heroism and solidarity that conflict can reveal in people. Another often-voiced complaint is that the museum ‘fails to present the Polish viewpoint’.

The first criticism is entirely justified: the museum presents the war as an unmitigated disaster, of which Poland was the first victim, and one of the most horribly affected by it.

The second is supremely unclear, unless it implies the total rejection of the museum’s underlying premise of showing the war as a universal, not only Polish, experience.

Be that as it may, the government’s war on the museum has been largely successful. The director, Paweł Machcewicz, has been fired and now attempts are being made to change the exhibition, presumably to make it more sympathetic to the Polish viewpoint. As it is copyright-protected this might prove more challenging, but a first point has been scored.

A documentary film concluding the exhibition showing post-World War II conflicts through the Cold War, the end of communism and present-day Syria has been eliminated. One of the reasons given is that it shows, in a brief sequence of a Polish opposition demonstration in the 80s, Paweł Adamowicz, then a student activist and now the opposition mayor of Gdańsk, who is supremely disliked by the regime. Thus, as far as the museum is concerned, Adamowicz has become an Orwellian non-person.

But international public opinion has rightly seen the museum takeover and the new law as shameful attempts to rewrite history. Much of Polish opinion, which is critical of the government, shares this view.

With Kochan wielding considerable influence within the ruling party, his Polocaust Museum might actually be built as part of the government’s attempts to lash its version of history to its own agenda. The deputy minister of culture has already endorsed the idea. If it happens, this desperate attempt to paint Polish history in the national white and red only – white for innocence, red for bloodshed – is doomed to failure.

And this failure will unavoidably make it even more difficult to educate world opinion – often misinformed, disinterested and disengaged – that the all-too-real history of Polish suffering deserves a sympathetic hearing.

The border town of Przemyśl is the main point of entry for Ukrainian refugees entering Poland. Most have come from Lviv, the central node for Ukrainians heading west. The photographer Florian Rainer has followed the route in the other direction. His images record both the anxiety and resilience of people forced to abandon their homes from one day to the next.