Belgian journal ‘La Revue Nouvelle’ explains how we can learn from the idiot: on inefficiency as resistance to surveillance capitalism; cosplay’s seriously transgressive fun; and life hacks as a way to beat collective mind control.

Inspired by Miriam Rasch’s essay ‘Faire l’idiot’ (first published in Glänta), La Revue Nouvelle asks what we can learn from the figure of the idiot. Rasch and editor Renaud Maes discuss the ‘kaleidoscope’ of contributions in a conversation about the unexpected virtues of playing the fool. For Rasch, the idiot’s unpredictability and idiosyncrasy are tools for resisting surveillance capitalism. In the age of big tech, with its reliance on frenetic communication and the constant generation and exchange of data, something as simple as refusing to respond immediately to messages or leaving behind your phone can be subversive. 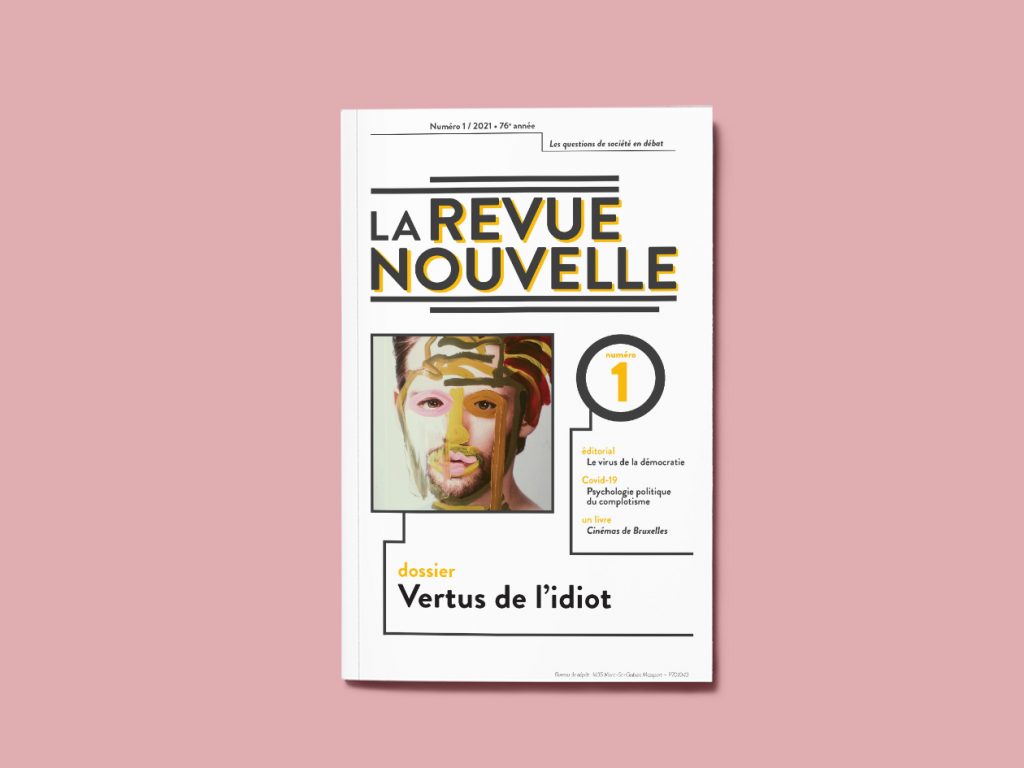 The idiot’s fundamental inefficiency and slowness are anathema to the entwined interests of power and capital. Like Bartleby the scrivener, who ‘would prefer not to’, the refusal to act can be an act of resistance. This idea appears in Guillermo Kozlowski’s article on the way agricultural corporations ‘fabricate’ idiots out of peasants who persist in using traditional techniques, with their refusal to change transformed into a sort of recalcitrance to the rationale of expansion and accumulation.

David Berliner focuses on the parodic, transgressive aspects of cosplay, which allows participants to play with identity in a game that is more serious than it looks. It is precisely the balance between play and seriousness that makes the figure of the idiot useful. In contrast, QAnon is a game whose participants have forgotten that it is a game.

The tension between play and seriousness also comes up in a discussion of the education system. Although games can be a valuable learning tool, the increasing pressure on education to be fun represents the influence of the economy of attention. The aim of educational practices becomes simply to capture and maintain attention, pitting teachers against Twitter or Facebook. The figure of the idiot offers a model for slowing down.

The idiot and the troll

Lionel Maes describes another type of resistance to big tech in the form of hacking, piracy and tinkering. The techniques developed by smartphone users to bypass strategies designed to control how they use their devices can involve almost absurd steps, with random-seeming sequences of buttons to press and characters to input. When carried out in order to break the flow of information, to introduce friction into processes that have been designed to be smooth and ‘user-friendly’, or to decelerate the hectic cycle of communication, this type of hacking becomes an ‘idiotist’ tactic.

Although the promotion of idiocy could be seen as risky in the era of Trumpism, Rasch argues that there is a crucial distinction between the idiot and the troll. The latter is almost the ideal-typical user of Google or Twitter, who want nothing more than constant engagement and activity: the troll manipulates the system and in doing so follows its rules precisely. The idiot, on the other hand, refuses to play the game of one-upmanship. She does nothing, thereby creating a space of solitude and private reflection where new ideas become possible.

The idiot is an inherently a solitary figure, which represents a challenge in terms of the collective organization of resistance. As soon as there is any kind of central office dictating how members of the group should behave, the idiot’s brand of resistance becomes impossible. Individual autonomy is essential for evading ‘algorithmic capture’.