In Osteuropa, Ilya Kalinin describes a political conflict in Russia familiar in the West: one between liberal ‘elites’ and anti-liberal ‘left-behinds’. Like many western critics of neoliberalism, his approach begins with the elites rather than their opponents. 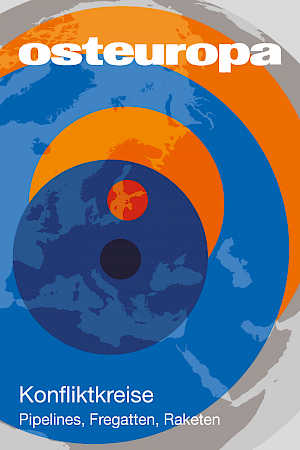 In Osteuropa, Ilya Kalinin describes a political conflict in Russia familiar in the West: one between liberal ‘elites’ and anti-liberal ‘left-behinds’. Like many western critics of neoliberalism, his approach begins with the elites rather than their opponents. In Russia, however, the issue is not elite responsibility for illiberal counter-hegemonic insurgency, but the responsibility of a counter-hegemonic liberal elite for its failure to successfully challenge an illiberal establishment.

The fundamental mistake of the protest movements in Russia in 2011–2012 was, argues Kalinin, to conflate ‘individual ethical choice’ with ‘political attitude’. This was typical of an apolitical tendency among the intelligentsia formed during the late Soviet era, which itself recycled the old, eighteenth-century opposition between culture and the state. In 2011–12, the tendency received a ‘neoliberal upgrade’ in the form of the ‘ideology of creativity’. ‘A cultural barrier was erected between those who had made the right choice and opted for the post-industrial future, and those who had remained stuck in the industrial past.’

For all its progressive posturing, the movement was anachronistic in its analysis of power in Russia. The current regime is ‘not a new version of the Soviet model, but firmly anchored in global neoliberalism’. As such, it ‘can only be dealt with if one cites concrete social economic facts. Talking about values doesn’t get you anywhere, because the regime claims all possible values as its own: liberal as well as conservative, national and imperial; democratic as well as authoritarian. Every alternative programme is thereby absorbed, leaving the opposition’s claim to autonomy as its sole distinction from the regime. This allows the regime to portray it as marginal, as a tiny group fundamentally out of touch with the interests of the majority.’

Response: Lev Gudkov and Natalia Zorkaya argue that the true reasons for the failure of the protest movement lie elsewhere: namely, in the systematic repression of opposition politics over the previous decade. By 2011, there was neither a party nor an independent media able to coordinate the interests of the protesters or ‘channel social tensions in the direction of a democratic contest based on rational arguments’. Hence, the only possible form of protest in 2011 was to ‘violate the pre-determined boundaries that allowed only demonstrative exhibitions of loyalty’.

Also: Otto Luchterhandt on Russia’s violation of international law in the Sea of Azov; Roland Götz on the hypocrisy of opposition to North Stream 2; Georg Dox on Austria’s special relationship with Russia; and a dossier on the Russian book trade.

Published 8 May 2019
Original in German
First published by Eurozine