‘Osteuropa’ places Hungary and Poland under the knife; ‘Soundings’ says ’68 wasn’t to blame for what came next; ‘Glänta’ notes similarities, differences and things in between; ‘Samtiden’ returns to #MeToo; and ‘Varlik’ celebrates 85 years of cultural journalism. 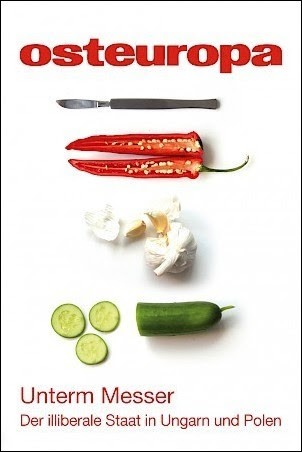 Cultural hegemony has been a central goal of the Hungarian government since the start of Viktor Orbán’s second term in 2010. The nationalist restructuring of the Hungarian cultural sector is as much about power and money as it is about ideology, writes László J. Győri in Osteuropa. Orbán’s ‘frontal attack’ on culture has taken place on multiple levels, beginning with the appointment of loyalists to key positions. The Hungarian Academy of Arts, given constitutional status in 2011, is now staffed by staunch conservatives who decide over the award of subsidies, wages, grants and prizes to artists throughout the country.

Győri describes in detail how, in theatre, film, literature, journalism and research, Fidesz supporters have been put in charge of institutions at all levels. The saga around the new National Theatre and its director, Attila Vidnyánszky – appointed in 2013 to replace the successful yet intransigent Róbert Alföldi – is perhaps the most glaring example of nepotism and ideological bias. ‘Orbán’s methods bear increasing resemblance to the plot of Alfred Jarry’s Ubu Roi. But what amuses us in the theatre has, since 2010, become an oppressive and increasingly dismal reality. Orbán’s absurdist tragedy will leave deep traces in people’s minds.’

Poland: Marta Bucholc and Maciej Komornik write on the dismantling of the Polish legal system under PiS. With a wave of new laws, PiS first paralysed the constitutional court and then placed a large part of the judiciary under the control of the executive. The Polish courts were seen as a bastion of post-communism and judges across the board were defamed and dismissed. Now, write Bucholc and Komornik, the government can influence politically crucial cases on decisions of the National Broadcasting Council and on monopoly laws – thus facilitating the ‘re-Polonization’ of the media.

EU: It should be no surprise that anti-liberalism and de-Europeanization are two sides of the same coin in Poland and Hungary, write Piotr Buras and Zsuzsanna Vegh. Critique of the post-’89 transformation as the ‘policy of imitation’ ‘necessarily entails critique of the EU as major point of reference for the next phase of modernization and development’. Nevertheless, Hungary’s and Poland’s EU policies differ significantly: while Poland has softened its tone following the triggering of Article 7, Hungary remains confrontational. The report of the EU’s Committee for Civil Liberties, Justice and Home Affairs published in April 2018 could well form the basis of an Article 7 procedure against Hungary, too. 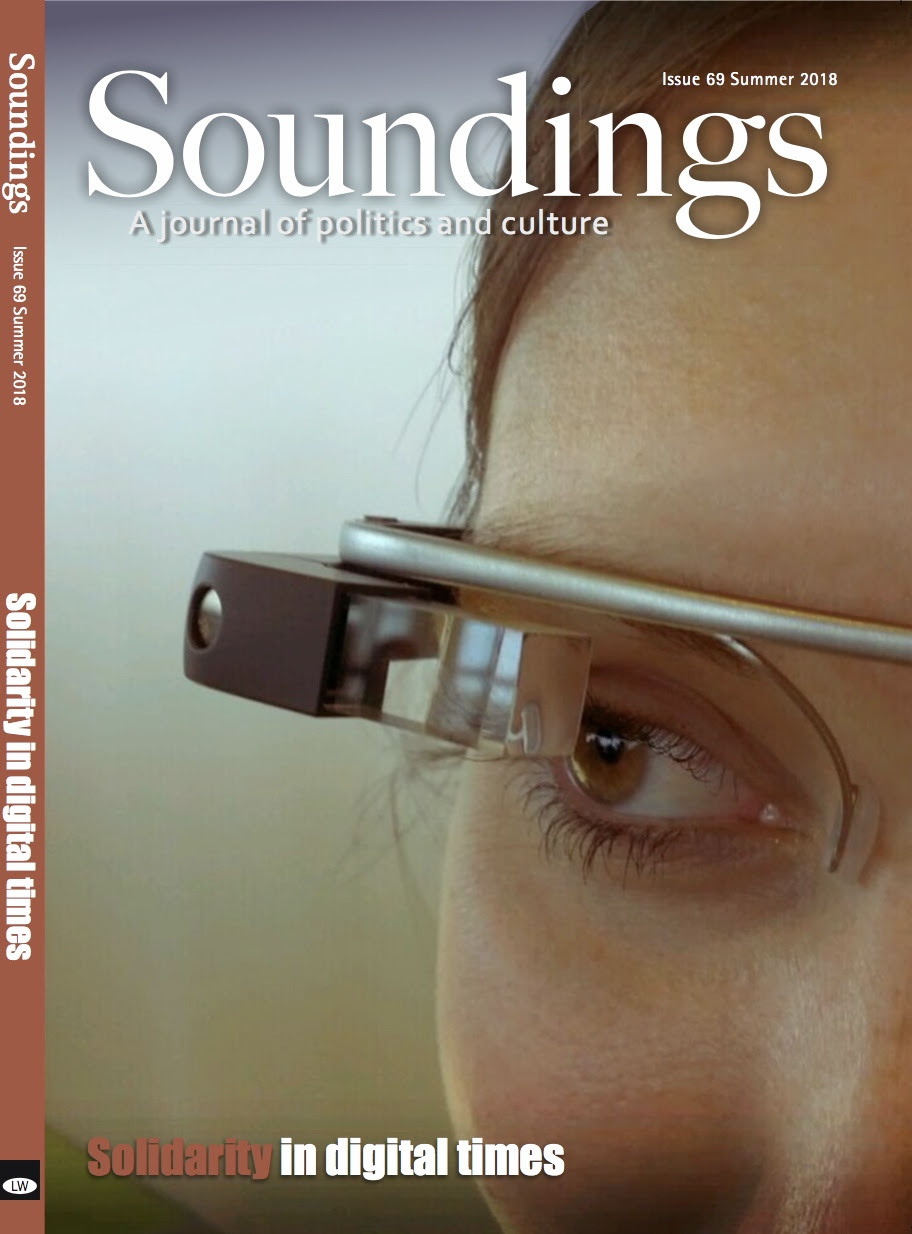 In Soundings, playwright David Edgar writes on the legacy of ’68 in the UK. The argument that the most enduring legacy of ’68 was neoliberalism is mistaken, he writes. Margaret Thatcher saw her own politics as a corrective to the cultural revolution, saying in 1982 that ‘we are reaping what was sown in the sixties. The fashionable theories and permissive clap-trap set the scene for a society in which the old virtues of discipline and self-restraint were denigrated’. Although Thatcher was an was an economic libertarian, writes Edgar, she was always a social conservative. Indeed, as Stuart Hall observed in in the late 1970s, the progenitor of Thatcherism was Enoch Powell.

For politics today, the crucial shift was social democracy’s embrace of neoliberalism, leaving the populist right to fill the vacuum. ‘And then,’ writes Edgar, ‘came the referendum; in which, freed from traditional party contours, working-class electors were able to vote social-conservative without having to vote for the rest of the Conservative package as well. Like the rocks exposed by a lowering tide, the referendum was perceived as revealing an underlying hostility to social liberalism which had been there all along.’ (Full article.)

Germany: The success of the AfD is the culmination of the misfit between political centrism and the national-conservative groundswell catalysed by the refugee wave of 2015–16, writes Eurozine editor Simon Garnett. Germany’s other political parties and media are now faced with some uncomfortable decisions:

‘Distaste for populist “form” – its provocations, its vulgarity, its lack of appreciation for the institutions of post-war (west German) democracy, its parochialism, even its xenophobia – must not prevent engagement with populist ‘content’. One step towards regaining political trust and support for the parties of the left would be to address the different reasons for the appeal of the AfD … In Germany, however, distaste for populism is strong, particularly in the media, which has a historically ingrained sense of its pedagogic, progressive mission.’

Also: Political economist Phoebe Moore on the management techniques of the fourth Industrial Revolution; and feminist theorist Lynne Segal on happiness as a social good and its relationship to care. 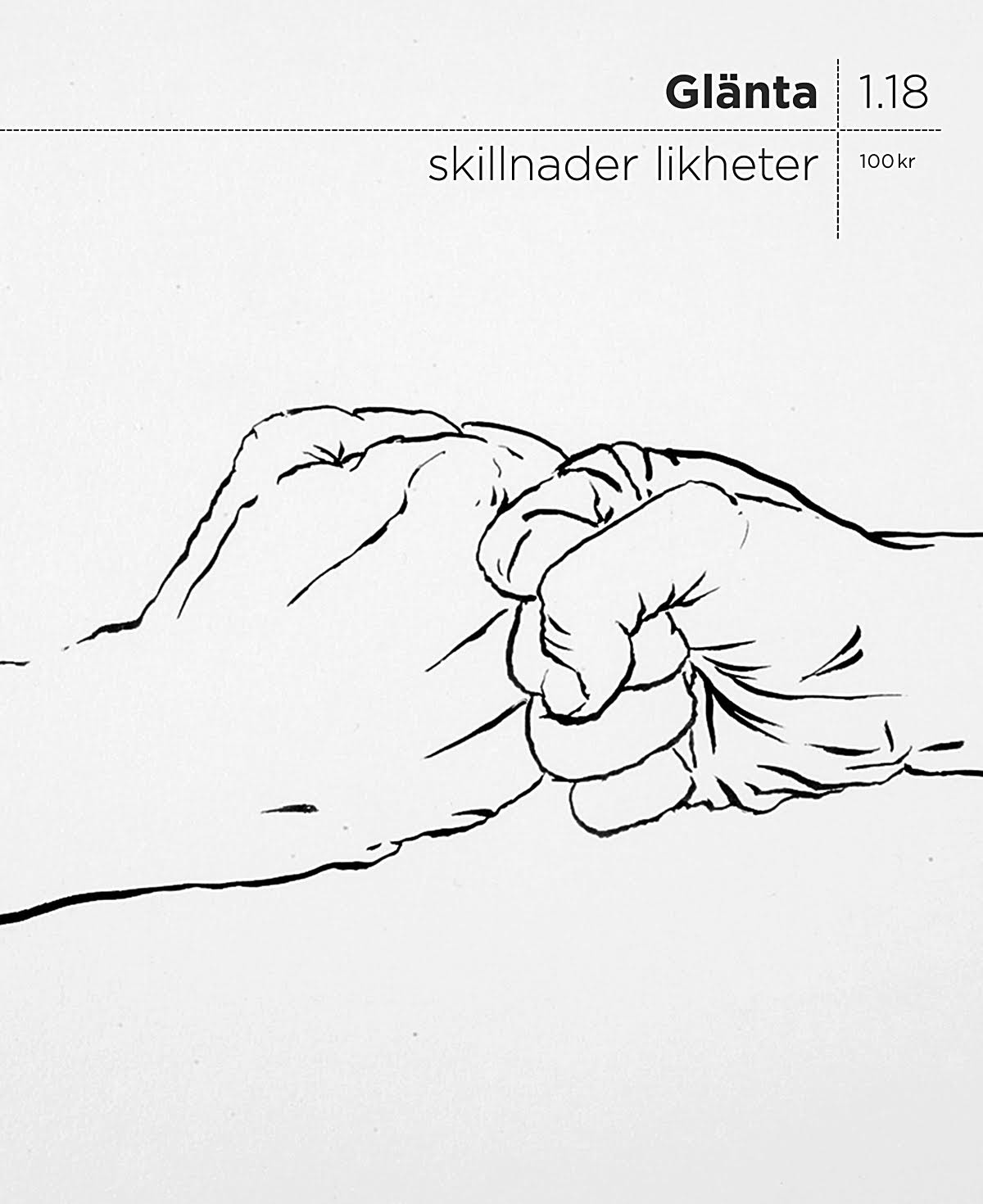 Introducing an issue of Glänta entitled ‘Differences Similarities’, editors Göran Dahlberg and Linn Hansén write: ‘It seems that on a general level, both the statement that opposites attract and the other extreme, that like seeks like, are equally true and reasonable. Both are strongly supported in biology, chemistry and physics.’

Dahlberg’s micro-essays deal with humans, ghosts and the entities in between. Here is Dahlberg on social life: ‘Two or more people walking together often happily keep in step in order to achieve the silence in the intervals. A rhythmic silence.’ And on art: ‘There is something scary about a really good imitation. It is deeply disturbing when a phenomenon seems to be neither fake nor real. Even more so when it is not obvious whether the intention is to make the fake appear as real as possible or to make the fake explicit – or, for that matter, what the third option might be.’

Blackness/whiteness: Glänta translates an interview with James Baldwin by the Turkish publisher Nazar Büyüm, conducted in 1969 and rediscovered in 2015. Among other things, Baldwin talks about the difference between freedom and liberation – ‘in order to be able to speak about “freedom” … man should first be liberated’; on the myth of the melting pot – ‘the Negro as an indispensable economical mule, built the country and then became the most unwanted person in that country’; and white working-class racism: ‘The poor white of the South is pitiable because he thinks he is superior to the Negro … He is anxious about his wife … he is anxious about his job, he is anxious about his children, in fact his anxiety is about what it means to be white.’ (English original.)

Identity: Achille Mbembe writes on African nationalism and the aporias of identity: ‘Within much of Black discourse, the fundamental foundations of nineteenth-century anthropology –the prejudice of evolutionary thinking and the belief in progress – remain intact. And the racialization of the nation and the nationalization of race go hand in hand.’ (English original.) 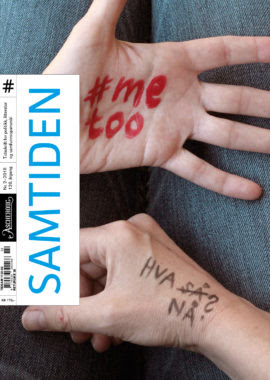 Samtiden sets out to rescue ‘#metoo’ from becoming just a half-forgotten logo: ‘If we are beginning to believe that “we’re over all that”, it’s time for a reminder’, writes the editor Christian Kjelstrup. ‘And if #metoo shines a critical light on an aspect of our culture that we’ve been blind to, its supporters must put up with the same searchlight.’

Norway: The issue begins with an all too familiar account from Norway: a woman speaks of how male sexualised bullying – from innuendo to groping – eroded her enjoyment of work. ‘Why did I keep quiet these last five years? … Because I couldn’t bear any more remarks about my body.’ Threatened with the sack if she named anyone, she agreed to remain anonymous.

However, Øystein Stene stresses that #metoo is too prone to ‘campaign for women as victims … [A woman who can] shape her fate and look after herself is not their central ideal.’ In this scenario, ‘the male perpetrator … only figures as a background grotesque’. Such attitudes become normative: people ‘seem unable to be constructive about perpetrators; better stick to the innocent female victim … often without a shred of evidence either way.’ The movement has all the features of populism, since it is ‘run on simple moral precepts … and driven by home-made narratives with a strong emotional charge.’

International: Activists reporting on the state of feminism outside Scandinavia present an inconsistent picture. The Argentinian and Italian contributions are angry but hopeful for the future. The Chinese report is an upbeat tale of demonstrations by one of the famous ‘five feminist’ students. The reports from Russia and India tell grim stories of ancient, deep-rooted prejudice that technology has transposed into the present.

Structural oppression: Interviewing Toril Moi, professor in literature at Duke University, Christian Kjelstrup refers to the harassment of men. Moi accepts that ‘[generally] it’s just as awful but it isn’t a function of social structure … as is oppression of women because they are women. That’s why I think it’s OK to protest only on women’s behalf.’ Moi once shared the belief that being a free agent is what matters: ‘even with sexism built into social structure I thought more about my right to act freely than my right not to be fumbled by men. Now I know it isn’t good enough.’ 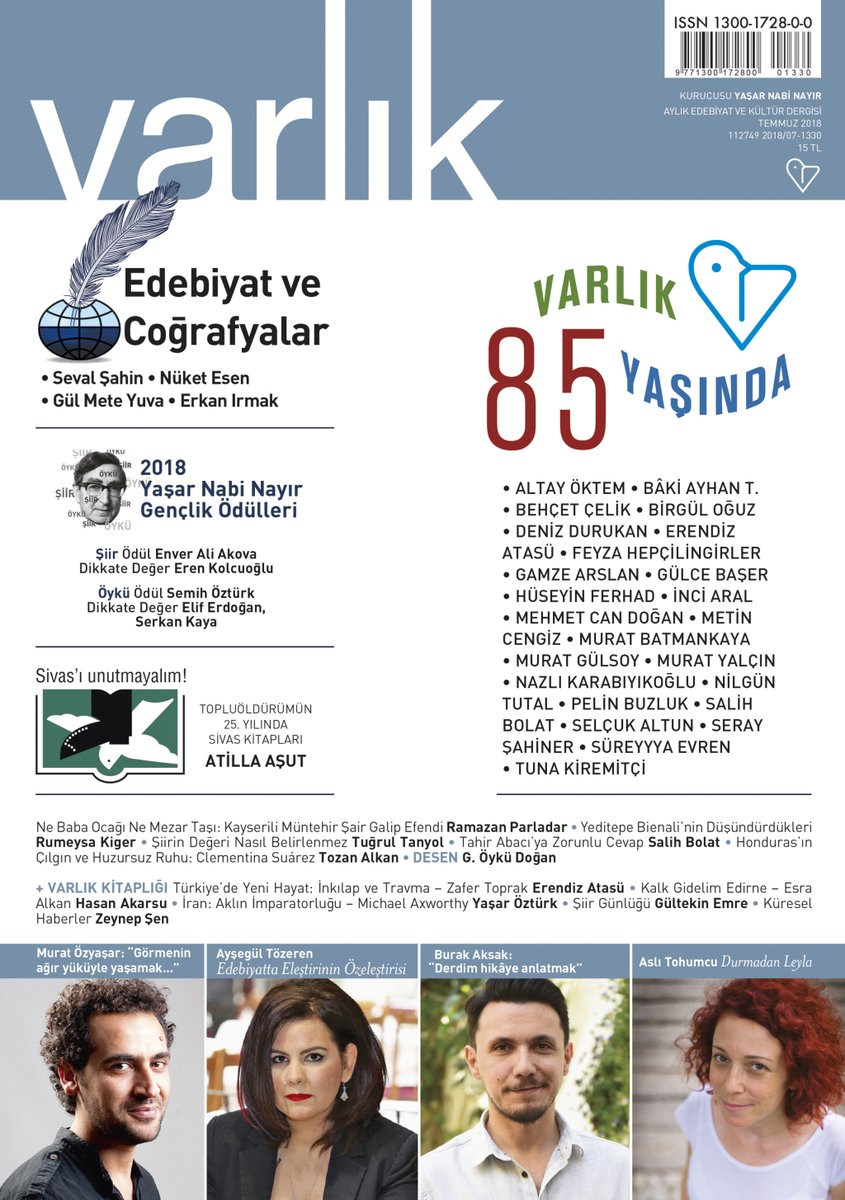 July’s issue of Varlık marked 85 years of the journal with reflections on the achievements of past decades. Murat Batmankaya traces the history of Varlık from its first publication on 15 July 1933, listing the poets and writers the journal has embraced on the way to becoming ‘a cornerstone of our literature’. Under founding editor Yaşar Nabi Nayır, the early years were often dominated by translations, which the journal considered ‘the beginning and foundation of the Turkish cultural renaissance’. As well as enriching the cultural environment, translation also encouraged precision and debate of the nuances of the recently reformed Turkish language.

But Varlık also encouraged works in Turkish. Even if the page count became thinner during the Second World War, it survived, and went on to provide a platform for new waves of poets and writers. From 1990, when Enver Ercan took over as editor, the journal began to cover contemporary issues with vigour and close attention. Batmankaya acknowledges that his historical tour contains ‘enough names to fill an encyclopedia of literature’, proof that Varlık ‘maintains its importance in our cultural world to this day by sustaining the ambition and function of being the journal of the new’.

Recollections: Nilgün Tutal, who first appeared in the journal in 2007, writes about the ‘intellectual friendships’ that are at the heart of Varlık’s editorial process. And Süreyyya Evrenremembers his pride in the 1998 issue on ‘21st Century Anarchism’ that ‘combined two things that many a “progressive” publication does not like at all: postmodernism and anarchism’.

Sivas massacre: Attila Aşut looks back the 25th anniversary of the arson massacre of 37 people at the Madımak Hotel on 2 July 1993 and how he assembled the Sivas Book, a collection of witness accounts and documentation that he sees as just as precious today as ‘religious sensitivity is being irritated and the crowds are once more wanted for street combat’.