On Monday 21 Feb, on the eighth anniversary of the victory of the Euromaidan, Russian president Vladimir Putin effectively declared war on Ukraine. To justify this recklessness, he gave an hour-long pseudo-historical rant that portrayed Ukraine as an artificial state that owes its existence to Russia. He also accused the Ukrainian government of carrying out a genocide on Russian-speaking population, producing nuclear weapons and sponsoring extremist activity in Crimea.

Presenting Ukraine as a dire threat to the Russian state, he recognized the independence of two Ukrainian territories, the self-proclaimed ‘people’s republics’ of Donetsk and Luhansk, which have de-facto been occupied by Russia since 2014. What happened yesterday was a blatant violation of Ukraine’s territorial sovereignty, all international agreements, and international law.

The possibility of conflict with Russia has been a daily reality for most Ukrainians ever since the Euromaidan uprising of 2013–14 succeeded in overthrowing the pro-Russian government of Viktor Yanukovych.

Since then, Russia has invaded and occupied Ukraine’s Donbas region in the east, and also annexed the Crimean peninsula in the south. Thousands of Ukrainians have died. Millions of people have been resettled as ‘internally displaced’.

Anticipating more trouble, Ukraine’s Ministry of Culture and Information Policy last year published the brochure In Case of Emergency or War, a full colour, illustrated, fourteen-page document that currently circulates among the country’s residents. The brochure offers basic tips for survival: how to protect yourself against disinformation; where to hide in your building in case of a Russian missile attack; and how to pack a survival kit. Above all, it urges Ukrainians to keep calm and not panic.

We Ukrainians have learned that, when living next to an abusive and deranged neighbour, the only way to protect oneself is not to have illusions, see the bully for who he is, and be ready to resist and fight. A recent poll shows that one-third of Ukrainians are ready to put up armed resistance and 21.7 percent more are ready to resist by other means.

These bits of conventional wisdom ought to apply not only to Ukrainians but also to our western partners, who are currently wrestling with the fine line between addressing the threat of violence and triggering even more violence. Indeed, dealing with an unstable opponent with a powerful military and nuclear weapons is extremely delicate. It requires diplomatic finesse, military readiness and caution. 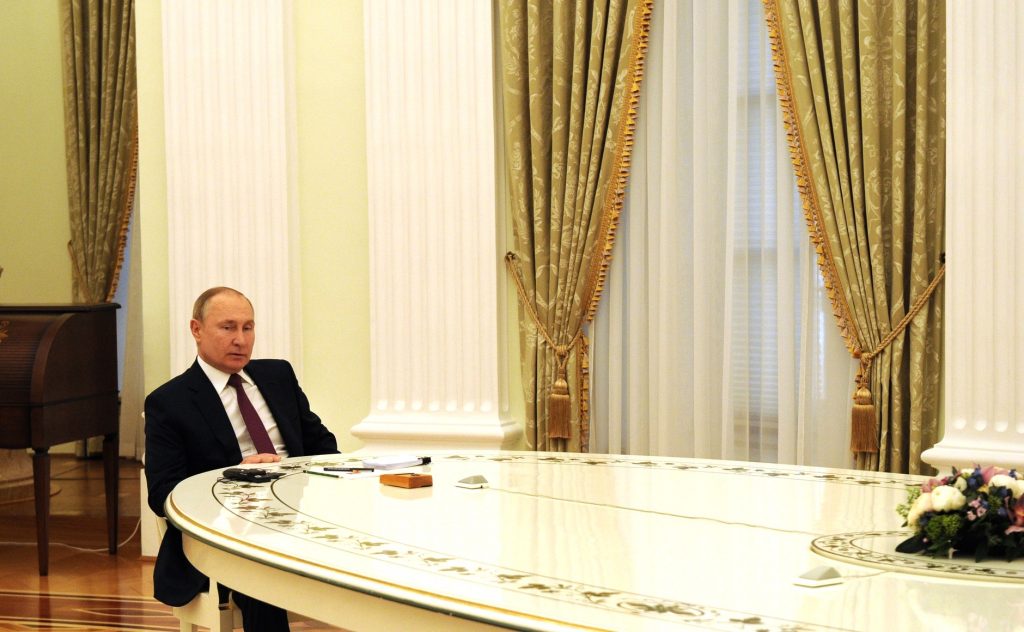 Misperceptions of the crisis

‘Realists’ such as Stephen Walt suggest that had it not been for the American thirst to expand its security guarantees to ‘Russia’s traditional sphere of influence’ there would be no conflict right now. Sharing the sentiment, Thomas Graham and Rajan Menon propose a compromise, whereby the West and Russia would agree on a period of moratorium on NATO’s expansion. Elsewhere, Graham even proposes validating the ‘hard truth’ that Crimea is now part of Russia.

This, however, is to misunderstand that the current crisis is not about NATO. It is about the fact that Ukraine has become the unlucky hostage of a paranoid autocrat.

But the occupation of Ukraine should not be seen as a local affair, nor should the country be viewed as a strategic sacrifice to appease Putin’s fears about Russian national security. Instead, it should be seen as a warning of how far he can push his might, if not properly restrained.

After all, we have seen Russia sow chaos and destabilize democracies around the world. Only last year, Russia launched 23,000 cyberattacks on more than 600 organizations, including government agencies and think tanks. Five years ago, Russia attempted to influence the outcome of the American elections by stealing and releasing the Democratic National Committee emails.

Since then, Russia has played a large role in instigating conflicts, polarizing American society through their troll-farms and meddling in the primaries and 2020 elections. In Europe too, Russian intelligence organizations were caught interfering in the 2017 French and German elections, instigating separatist movements, sponsoring far-right parties, activists and media. Russia is also suspected of attempting to influence the 2014 Scottish independence referendum and most notoriously, the referendum on Brexit. If this is not enough, consider Russia’s occupation of parts of Georgia – South Ossetia and Abkhazia in 2008 – and the Moldovan territory of Transniestria in 1992.

If Putin does not suffer considerably from the consequences of his invasion of Ukraine, there is nothing to stop him from invading the Baltic countries and from waging cyber war on democracies that he cannot reach merely for geographical reasons. Acquiescing to Putin’s annexation of Crimea obviously hasn’t assuaged his anxieties about the West. Meeting his demands to NATO – as the Biden administration has apparently realized – will embolden him, not appease him.

It is time for the leaders of the United States and EU to understand what the Ukrainians have already painfully learned: that Putin is a bully and should be treated as such. Bullies respond to strength. This means not buying into his paranoia about NATO.

To ratify such a misperception of the real threats in this region normalizes Putin as a strategic player, a master of realpolitik, a leader who simply defends his national interests. It shifts responsibility from Russia to the West and, in the current context, serves to feed Putin’s imperialist ambitions.

How real is the threat from NATO?

Russia has long constructed the narrative about NATO threatening its national security, even though NATO and Russia once enjoyed a period of productive cooperation. In the 1994 Budapest Memorandum on Security Assurances, Ukraine gave up its nuclear arsenal in return for security guarantees by Russia, the United States and the United Kingdom. In 1994, Russia became the first country to join NATO’s Partnership for Peace, whose goals were to expand and intensify ‘political and military cooperation in Europe, increasing stability, diminishing threats to peace, and building strengthened security relationships.’

In 1997, President Boris Yeltsin signed a NATO-Russia Founding Act, which established goals for cooperation to build together ‘a lasting and inclusive peace in the Euro-Atlantic area on the principles of democracy and cooperative security’ in areas of peacekeeping, arms control, counter-terrorism and more. Russia established its diplomatic mission to NATO in 1998, and NATO opened its Information Office in Moscow to facilitate communication. Indeed, in the late 1990s, as part of the Partnership for Peace program, Russia deployed peacekeepers in support of NATO-led operations in the Western Balkans. As long as Russia seemed to be undergoing a process of democratization, it was seen in the West as one of the guarantors of peace on the continent.

Relationships with the West at first continued to be cordial under Putin. In 2002, Russia signed a declaration with NATO titled ‘NATO-Russia Relations: A New Quality’, which established a consensus-based body to cooperate with operations, such as conflicts in Afghanistan and counter-narcotic training around Central Asia and Pakistan. The same year, the NATO-Russia Permanent Joint Council – which had replaced Partnership for Peace in 1997 ­– was replaced by the NATO-Russia Council to provide another space for consultation on security issues and practical cooperation.

Everything started to change after Russia invaded Georgia in 2008. Yet even then, NATO was open to cooperating with Russia in the areas of joint counter-piracy operations and in Afghanistan. It was only after Russia’s invasion of Ukraine and the annexation of Crimea in 2014 that NATO suspended all civic and military cooperation with Russia.

Up until then, NATO had followed a similar path in its relationships with both Russia and Ukraine. NATO invited Ukraine to join the Partnership for Peace program in 1994 and established the NATO-Ukraine Commission in 1997. Although NATO did signal its open door policy for Ukraine’s Euro-Atlantic aspirations during the 2008 Bucharest Summit, it was clear to everyone that it would take years, if not decades, before Ukraine would be ready to apply to NATO.

Ukrainians themselves were deeply ambivalent about the prospect of joining NATO – in 2013, only 18 percent were in favour of joining, and 67 percent were against. It was only after Russia invaded Ukraine in 2014 that the majority of the population – 64 percent – changed their mind.

Putin’s framing of NATO as a ‘security threat’ to Russia is propaganda rather than a realistic assessment of the geopolitical situation. Neither NATO’s rhetoric nor actions have given Russia any reason to fear its possible military excursions. In contrast, Russia has invaded Ukraine – as well as other countries – and is currently the only state that poses a major threat to states within the EU. 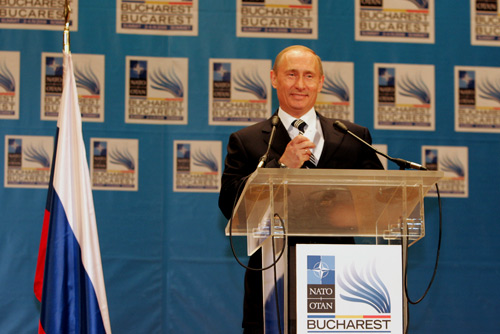 Vladimir Putin at the NATO summit in Bucharest in 2008. Source: Wikimedia Commons

Sanctions are not enough

Economic sanctions are necessary and timely, but only if implemented by all western states together. The EU is planning sanctions against the Russian MPs who voted for the recognition of the occupied territories. The German chancellor has announced the suspension of Nord Stream 2. The UK has declared economic sanctions targeting five major Russian banks and prominent oligarchs. The USA is deliberating on the next set of sanctions after adopting a milder version targeting businesses in the occupied territories.

Yet, as we have seen, sanctions alone are insufficient to deter Putin. Major collective action needs to be taken to restrain Russia’s cyberattacks and disinformation. Russia should be expelled from all international organizations, which it uses as a platform to wage its imperialist agenda, at a minimum from the UN Security Council, where it holds a rotating presidency.

Meanwhile, the polls showing the readiness of Ukrainians to resist the invasion disprove Putin’s conviction that Russians and Ukrainians are the same people. The videos of ordinary Ukrainian citizens drilling with wooden rifles suggest that the Russian army would face popular resistance should it try to invade Ukraine again.

As Ukrainians bravely brace to act as a shield against Russian aggression, the West for its part should continue to project military might, unity and support. Some steps have already been taken – Denmark sent fighter aircraft and a frigate to the Baltic Sea to help protect Lithuania, Spain sent its ships to join NATO naval forces in the Black Sea, France expressed readiness to send soldiers to Romania, the Netherlands has sent fighter aircraft to Bulgaria, and the United States has already shipped 500 tons of defence ammunition to Ukraine.

The ordinary Ukrainians currently preparing for combat know that Ukraine is at the centre of a new armed conflict. As the brochure from the Ministry of Culture and Information reminds them: ‘If you want peace, prepare for war.’

A plea from Kyiv

Putin’s autocracy has a reason to be afraid of its smaller neighbour: a working democracy always threatens a tyrant. Supporting Ukrainians’ fight for self-determination is not only a moral obligation, but an existential question for the democratic world.

Russia and Turkey have moved from confrontation to cooperation. But their shared interests have had deleterious consequences for the Kurds in Syria and Crimean Tatars in Ukraine. Tensions continue in Nagorno-Karabakh and Libya. And their support for right-wing authoritarianism in the Western Balkans is undermining liberal democratic values.