An item buried on page 16 of a recent issue of the New York Times announced that Michael Bloomberg, the 11th richest man in the world, had pledged 80 million dollars to support Democratic Party candidates to take back the US House of Representatives in November.1

Bloomberg is no ordinary billionaire. He served three terms as a Republican mayor of New York, a city that in theory allows mayors to serve only two terms. He is the smartest, richest – as well as the driest, and even the dullest – figure on the political scene. One of his critics puts it this way: ‘If a pile of money could take human form, it might bear a striking resemblance to Michael Bloomberg, a coldly rational figure who inspires little affection but near universal deference and a deflating sense that resistance is futile.’2

Not everyone would agree. Many New Yorkers believe that the city was never run better than under Bloomberg. Nevertheless, the remark encapsulates the drab yet formidable man who once said that New York City ‘needs to think like a private company’ and regard itself as ‘a luxury product.’

It’s worth taking a look at Bloomberg’s history and style of governing, because he is the only man in America who could run for president in 2020 as either a Democrat or  Republican – or, if he chooses to, finance his own independent campaign. 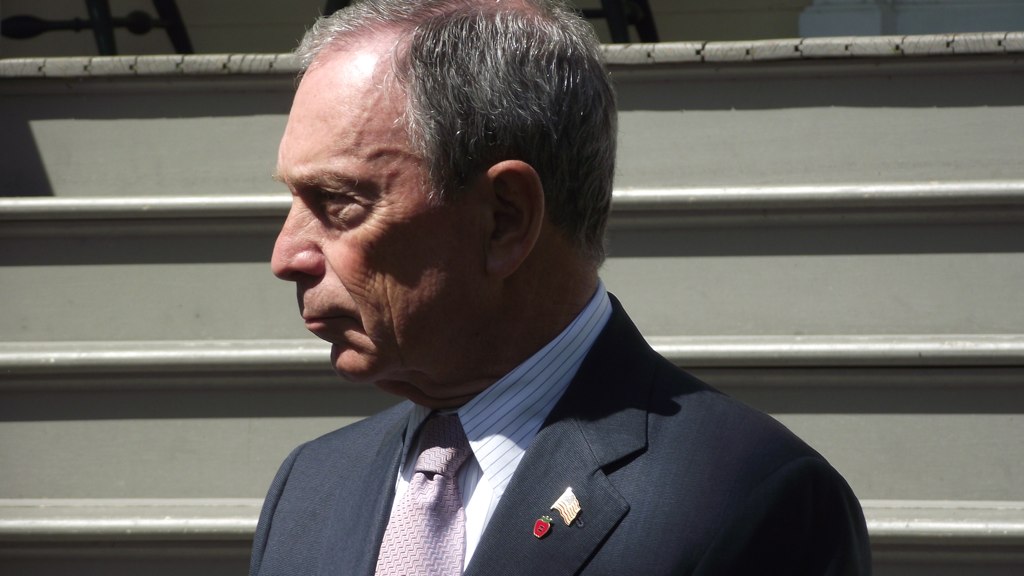 The son of an accountant who worked seven days a week, Bloomberg started out as an electrical engineer but joined the now-defunct Salomon Brothers financial house in the early 1980s, when changes in stock market regulation were heating up the financial industry. He was put in charge of computer systems, an obscure part of the business at that time. But he was apparently smarter and more hard-working than anyone in the company, and in a power-struggle got fired – with a 10-million-dollar ‘golden parachute.’

The fact that Bloomberg and Trump are both New York businessmen makes it tempting to compare them, but the comparisons aren’t illuminating. Trump is a wheeler-dealer, a con man, a trader – a venerable tradition going back to cavemen trading beads around the camp fire – while Bloomberg’s roots are in early 19th-century industrialism.

He took half of his 10-million-dollar severance pay and created a company called Bloomberg LP.

Rather than switching from venture to venture, Bloomberg had a single idea: to use computers to convey data lightning-fast to the financial industry. Currently there are some 325,000 ‘Bloombergs’ – computer terminals that deliver a dizzying array of data – installed in financial institutions around the world. Related to this central system are ancillary systems like Bloomberg Radio, Bloomberg TV, Bloomberg Markets and Bloomberg News – modesty is not one of the man’s chief virtues. He owns 88 percent of his own company, and has a reputed personal worth of 50 billion dollars, equal to approximately the annual GDP of Sweden or Switzerland.

What Bloomberg values most in his associates is loyalty. He runs things methodically from the top down, and chooses advisors whose thinking closely parallels his own. In a 1997 memoir, he wrote that ‘when someone departs, those of us who stay are hurt… [those who leave] become bad people. Period.’

In 2001, when Bloomberg decided to run for mayor of New York, it wasn’t hard to think of the city as a business; it had been becoming one for decades.

Ever since New York’s near-bankruptcy in 1975, both private and public unions had been losing members and power. Rent-controlled and rent-stabilized apartments were gradually disappearing, and virtually no new public housing was being built. Free higher education was a thing of the past. The city’s survival depended more and more on real estate taxes from luxury condos and office buildings; commercial rents made it almost impossible to open small businesses. The ‘mom and pop’ establishments that had characterized New York for centuries were dying out.

But if New York had become a business, the enterprise wasn’t prospering, and many felt that it needed not only more efficient management but a whole business philosophy. As an admirer of Bloomberg wrote, ‘what united Bloomberg and his inner circle is their view of the city as a product to be marketed.’3

The results of his 12-year stint as mayor weren’t mixed as much as layered. Many of his innovations were admirable, and they certainly differed from Trump’s heavy-handed, unabashedly cruel treatment of poor people and minorities. Yet one has to say that these innovations could be seen more as extensions of Bloomberg’s likes and dislikes than considered responses to the needs of the electorate.

On the ‘top’ layer, the most visible achievements were in the area of public health: a ban on high-sugar fizzy drinks, an increase in the tax on cigarettes and prohibition of smoking in restaurants and workplaces, the creation of bike lanes and the fostering of reasonably-priced bike rentals. Hardly earth-shattering ideas, but pleasant enough, and appreciated by most people.

In education and police policy, Bloomberg’s changes were more revealing and controversial. He took control from the Board of Education and initiated a policy of withholding funding from schools whose test results didn’t improve – understandable business practice perhaps, but deeply insensitive to the problems of overcrowded schools in poor areas. The policy proved to be ineffective anyway, and he ultimately backed down. He also supported ‘stop and frisk’ laws that allowed police to search virtually anyone whom they found ‘suspicious.’ In 2011, at the height of the policy – it was later deemed unconstitutional by the courts – over 600,000 people were stopped and frisked on New York City streets.

Behind these misguided policies may very well have been good intentions – a fast track to academic improvement, reduced crime. What was missing was a certain feel for humanity. Bloomberg may be strong on efficiency, but he seems short on psychological awareness.

Maybe his greatest achievement was turning the city’s six-billion-dollar debt into a budget surplus. Under his governance, the city enjoyed record prosperity, but also had more homeless people than since the Depression, and the largest disparity between rich and poor in the nation.

And then came the financial crisis of 2008. Believing that he was the best man to guide the city through the crisis, Bloomberg petitioned the City Council to change its two-term-limit to three. The only alleged impropriety was a charge that Bloomberg had convinced an opponent of the extension to accept a powerful position in exchange for his cooperation;4 this was relatively gentle arm-twisting in a city famous for backroom deals. Bloomberg financed his own campaign, won a third term (though the vote was close), and in all three terms took only 1 dollar a year as his salary.

Though Bloomberg, painfully uncomfortable before the press, is the least charismatic of public speakers, his rise in politics – like Trump’s – shines a light on the most immediate question facing American democracy: has business completely replaced politics? Will strong men be allowed by city councils or senates or parliaments to change laws whenever it suits them?

If Trump can in some way be seen as Julius Caesar (at least in terms of turning the Republic upside-down), might Bloomberg come to be seen as his successor, the super-efficient, authoritarian Augustus?

After he finished his third term, Bloomberg reclaimed his position as CEO at Bloomberg LP. The philanthropic arm of his empire continued to contribute several hundred million dollars annually to a variety of centre-left causes. (In 2015 the figure was 510 million dollars, making him the head of the third largest philanthropic organization in the US.) He switched his allegiance back to the Democratic party (he’d been a lifelong Democrat but couldn’t convince them to let him run for mayor in 2001), and during the 2016 campaign gave a speech in support of Hillary Clinton at the Democratic convention. For the past four years he’s been the UN Special Envoy for Cities and Climate Change, and has worked to organize cities to use renewable energy sources – a direct repudiation of Trump’s policies.

One has to wonder if all this isn’t a way of positioning himself for a presidential run.

Of course there are obstacles in his path – personal as well as political. At 76, he would not be everyone’s choice to last one, two – or even more – terms in one of the most gruelling jobs in the world. Though only nominally Jewish, his background could work against him; no Jew has ever been President or Vice President, and only one – Joe Lieberman, Al Gore’s running mate in 2000 – even tried.

Bloomberg’s rigidly middle-of-the-road political stance could make elements of both parties uneasy. If Trump-supported candidates do poorly in November, it is possible that the old-money Republicans – the Bush-Romney crowd – could reassert themselves and look for a socially liberal yet fiscally conservative candidate like Bloomberg. However, his support of abortion, his crusade for clean energy, his awkward but well-meaning relations with minority groups – all these together would likely spark civil war in today’s Republican Party.

Running as a Democrat wouldn’t be much easier. Though the party lacks national leaders, the more ‘progressive’ elements have been asserting themselves lately – witness the example last week of a 28-year-old Bernie Sanders-supporting Latina deposing one of the most powerful Democrats in Congress in a New York primary election. Some of Bloomberg’s mayoral policies, ‘stop and frisk’ prime among them, would be unpalatable to the progressives in the party, and could create something of the same havoc that Trump supporters generated on the Republican right.

So will Bloomberg run on his own ticket in 2020? Quite possibly. Given the sorry state of both parties, he could even win. Which might be the most troubling outcome of all. For isn’t it possible that Bloomberg’s very competence – his steely intellect and capacity to govern from the top with quiet but unwavering self-confidence – would drive yet another nail into the coffin of representative government?