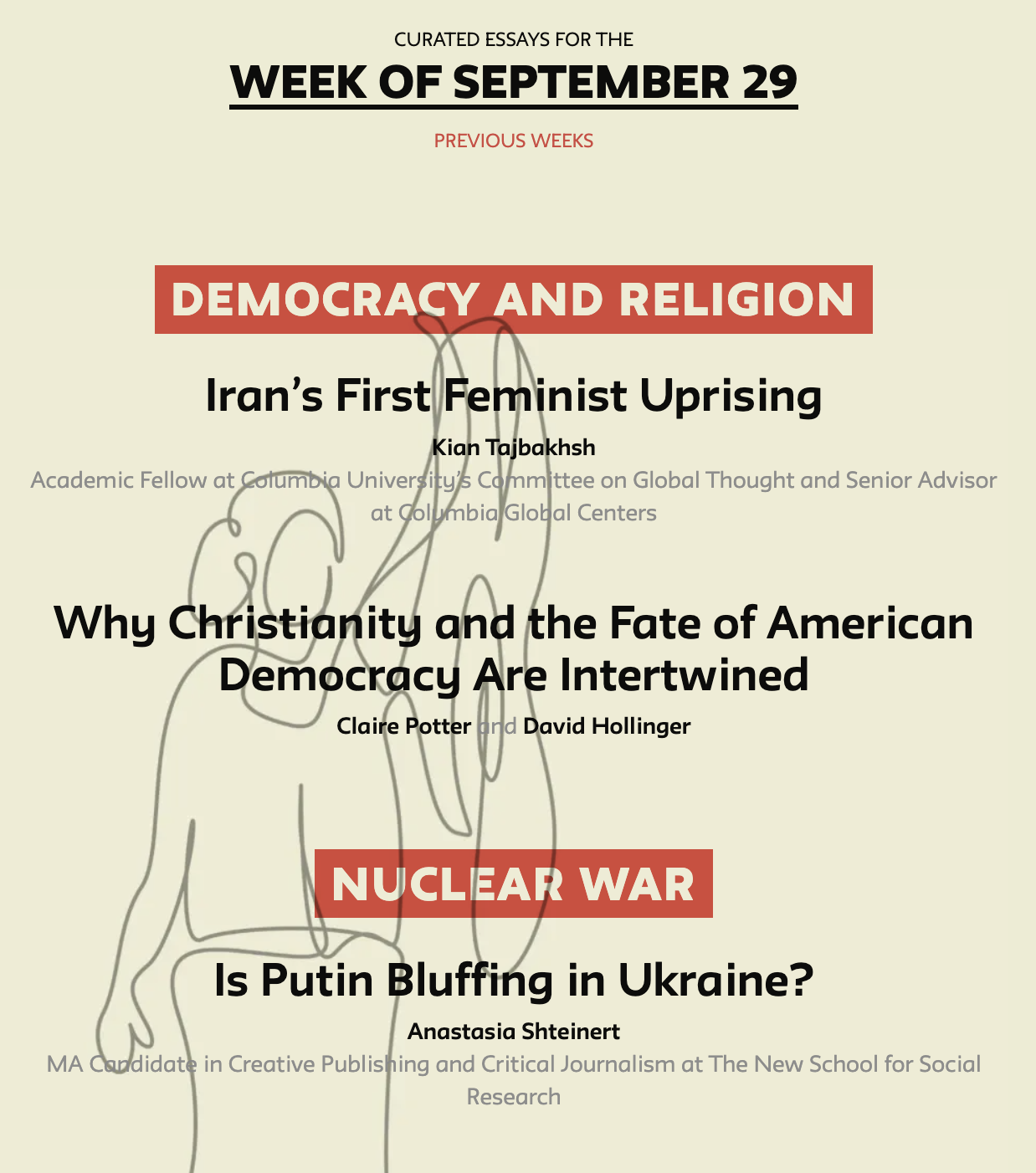 This article first appeared in Public Seminar on 29 September 2022.

This is the stirring slogan of the protests that have erupted across Iran, triggered by the death of Mahsa Amini, a 22-year-old Kurdish Iranian woman who was visiting Tehran with her family when Iran’s morality police detained her on 16 September for showing too much hair under her hijab.

Led by predominantly young women and men in their late teens and twenties, the nonviolent protests are expressing a range of priorities. Beyond their frustrations at the indignities of being harassed and arrested for violating the Islamic dress code – not to speak of the danger of dying as Amini did – most are also expressing a desire to live under a different system of government.

I believe we are witnessing something unprecedented in Iranian history: a feminist social movement. The renewed demand for accountable government and individual freedom – the liberal democratic ideal  – has sprung up from the battle over the patriarchal control of women’s bodies and the paternalistic domination of public space. 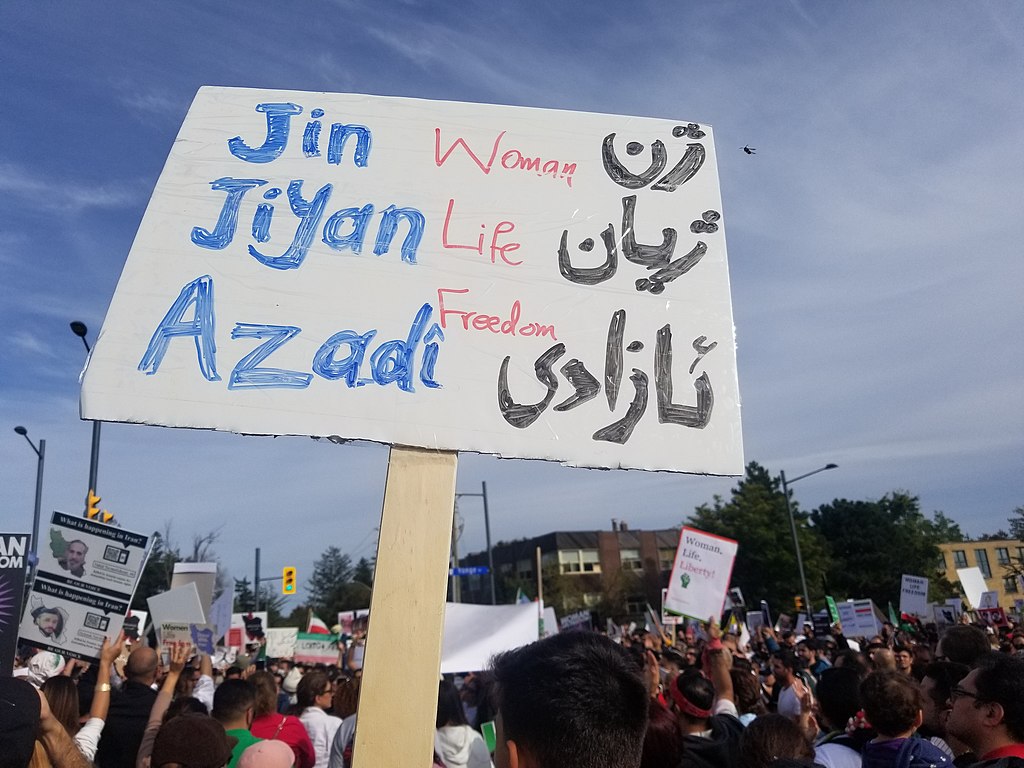 Woman, Life, Freedom sign in Central and Northern Kurdish as well as English. Photography by Pirehelokan via Wikimedia Commons

Today’s feminist movement, women and men alike, is saying no: women will exist in public, not as wards under the control of male guardians of religious law but as equal citizens. They are demanding recognition of basic individual human dignity and liberty, such as modern individuals have come to expect.

Although politically inchoate at the moment, some of the demands are already tapping into wider demands for political change. The Islamic regime or nezam rejects Western human rights as incompatible with their interpretation of Islamic rule. Whatever the immediate outcome, this taboo-breaking movement will likely have a profound, and positive, impact on Iranian society and gender relations over the longer term.

The protests did not emerge out of nowhere. For over four decades the Islamic Republic of Iran has tried to impose its Islamist model of public space (and political rule) on a recalcitrant majority population through organs such as the morality police. And for over four decades millions of women of all classes have resisted this coercive norm by engaging in one of the longest running campaigns of civil disobedience in any society by regularly and defiantly displaying inches of hair beyond their receding headscarves.

Last week, a regime spokesman estimated on Iranian television that fully enforcing the law would mean jailing or fining over 20 million women. Anyone looking around the streets of Iran cities would soon realize that perhaps 60-70 percent of women resist the dress code. Recognizing these realities, the spokesman called for sharply reducing the penalties for such defiance, while maintaining that the hijab law must nonetheless still be enforced (however randomly) because ‘it is God’s law’.

Softening the penalty for defying the law would be a significant gain for the women in Iran – but it would obviously not offer gender equality or wider civic and political freedoms. It is preposterous to suppose that a regime that has failed to indoctrinate an entire generation through state controlled schools and public propaganda believes that twenty minutes of coerced re-education about the benefits of the hijab in a police station – where Mahsa Amini was filmed collapsing – could achieve anything but added loathing by the future generation.

In any case, the current protest movement has demonstrated that the orthodox and narrow Islamist communitarian position the regime appears to have tied its identity to is incompatible with a free public space for women and men. A regime that regards liberal personal freedoms as nothing more than invitations to anarchy and licentiousness cannot offer its people a modern form of democratic citizenship in which political authority rests on the consent of individuals in a freely organized civil society.

In spite of the legal restrictions under which they live, many Iranian women have achieved important professional and personal gains since the 1979 Islamic revolution. They serve as doctors, engineers, academics, managers, sport champions, business owners and politicians, to name a few.

Yet the protests’ success is by no means assured. The nezam has responded forcefully, arresting hundreds of protesters and with dozens more killed in a crackdown that seems likely to continue. The regime’s refusal to budge on the compulsory hijab reflects their cold assessment of the supporters it needs to retain power, on which the status, privileges, and economic interests of regime insiders rest.

While a relatively small minority, these supporters are willing to impose their religious beliefs coercively on the majority, using the state’s military and police power. Eliminating the compulsory hijab would alienate this core group of supporters and weaken the stability of the government.

On the other hand, giving in to the cascade of demands for liberalization that would follow a removal of the hijab law might lead to regime collapse. This law is widely despised, but progressive liberalization would be increasingly hazardous.

As with all inflection points in authoritarian systems, it is hard to predict the outcome of the inevitable cycle of revolt and repression. Given past experience, it seems highly likely that the regime will prevail in the short term. But if so, the nezam will have to govern a seething dissatisfied population of tens of millions.

The brave protesters in the streets today have contributed a new dimension to the vocabulary of civic courage and the dignity underpinning democratic citizenship for Iranians of all ages and classes. They have thrown down a moral as well as civic challenge that will vex the Iranian government for years to come.

The patriarch and the pope