A conversation with the writer Etgar Keret

The minimalist stories and comics of Etgar Keret have won many readers in Israel, Poland, Hungary, China, the United States and a dozen other countries. In late October 2012, Keret visited Riga, where he met with the readers of his book of short stories, The Bus Driver Who Wanted to Be God & Other Stories. Later he entertained a smaller audience at the residence of the Israeli ambassador. 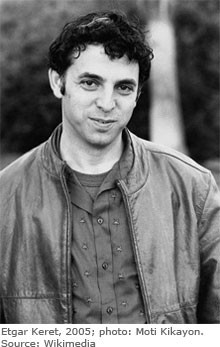 Ieva Lesinska: Does it happen often that you get invited to ambassadors’ houses?
Etgar Keret: No, not that much. Usually, when I come to very small countries. And here the ambassador, she really likes my stories. So I don’t mind it, I don’t have a problem with the ambassadors. I have a problem with my foreign minister, but that’s another thing. I was supposed to come here in February, but my father got very ill, he passed away since then. I was in Stockholm and so I thought on the way back I could settle my debt to Riga.

IL: You mentioned your father. From your stories it seems that you were quite close to your parents.