Expectations of an AfD surge in Saxony and Brandenburg prompt speculations in Blätter on a watershed moment for the party, as it veers further rightwards. Also, why blaming the history of the GDR for east Germany’s far-right problem is crudely ideological; and the failure of politics and media to see the Lübcke murder coming. 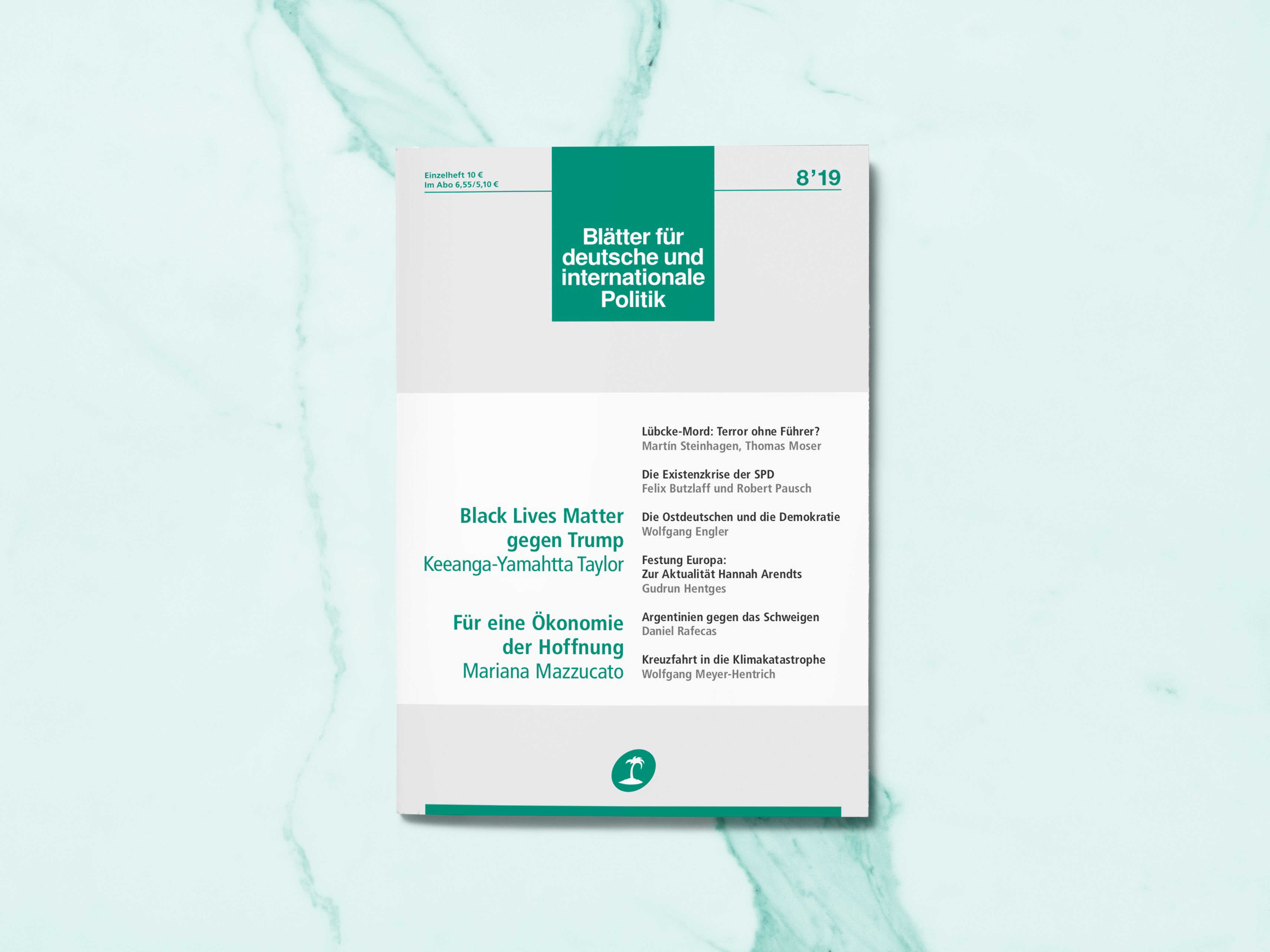 The elections in the eastern German states of Saxony and Brandenburg on 1 September, and in Thuringia at the end of October, are expected to deliver a surge for the AfD and to place coalition arithmetic under major strain. Moreover, in advance of the elections, an internal power struggle has been going on within the party itself, with Thuringian Björn Höcke, leader of the ‘rightwing’ faction, challenging the current ‘moderate’ leadership at the national level. Blätter co-editor Albrecht von Lücke speculates on the type of party that a Höcke-led AfD would become.

The current chairmen Alexander Gauland and Georg Meuthen see the success of the AfD as lying in its avoidance of conventional far-right rhetoric. Occidentalism and Islamophobia, not neo-Nazi revisionism, have so far defined the official vocabulary of the party. In addition, the division of power at the top has been designed to give the impression of democratic party structure. This would change with a Höcke takeover: ‘Above all in the East, though by no means not just there, the führer cult clearly no longer puts people off. On the contrary, as dissatisfaction with democracy grows, authoritarian leadership is becoming positively attractive, as is proved by the remarkable approval for Vladimir Putin.’ 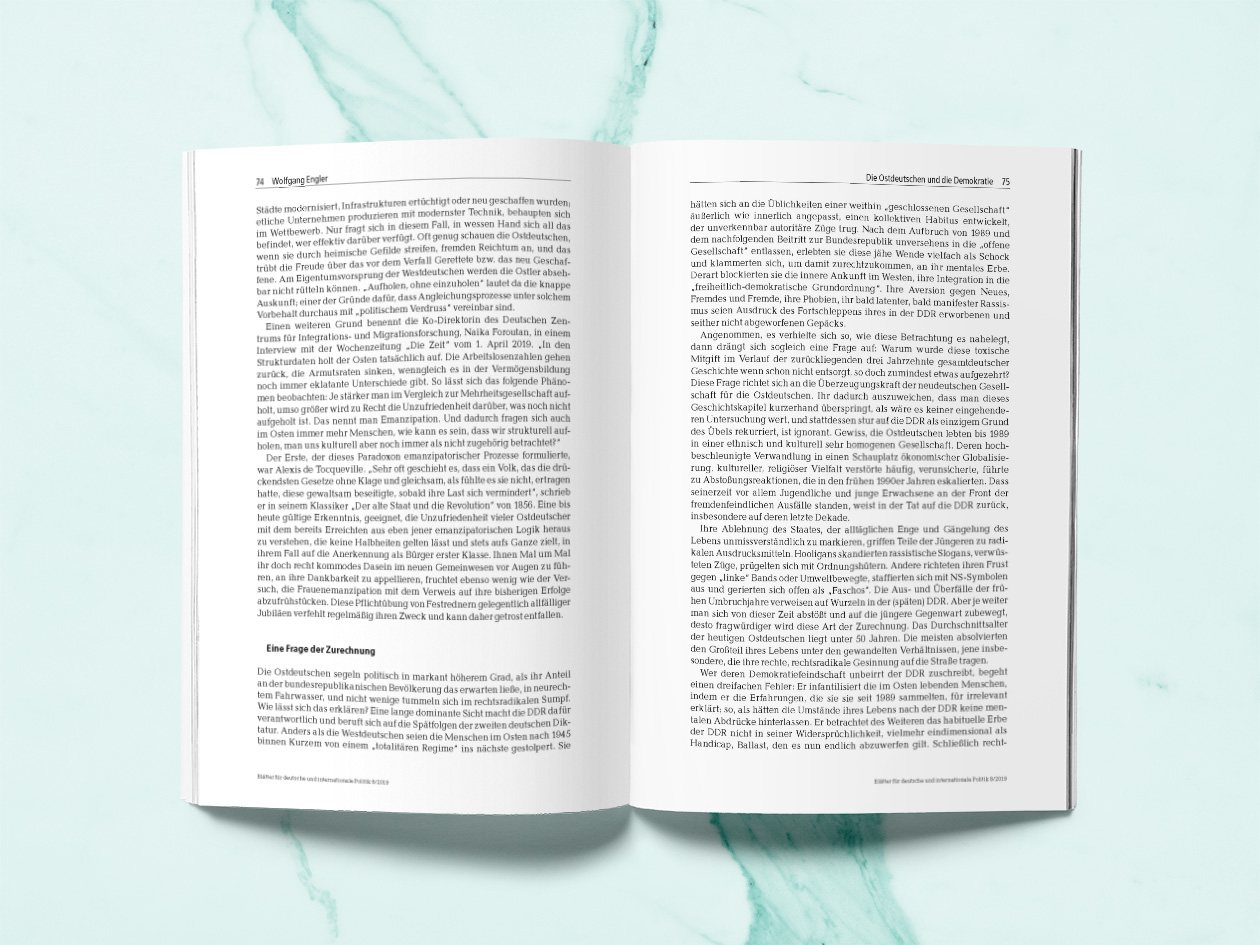 Sociologist Wolfgang Engler vigorously refutes the theory that eastern Germany is incapable of democracy for historical reasons. To blame the far-right resurgence in the former GDR on forty years of communism is to commit a threefold error. First, it denigrates people’s experience of the last thirty years; second, it operates a one-dimensional view of the GDR as handicap or ‘baggage’; third, it justifies the injustices that went with the post-communist upheavals, which turned many people into ‘second-class citizens’. ‘The notorious blindness towards the history of the last thirty years when explaining the far-right tendencies of eastern Germans is crude ideology.’

The murder in June of the Hessian CDU politician Walter Lübcke by a (western German) neo-Nazi ‘sleeper’ prompted talk of a ‘new quality’ of rightwing violence. And yet, as the journalist Martín Steinhagen writes, politics ought to know better. Underground far-right networks did not cease to exist after the outing of NSU terrorist cell in 2011. Nor is far-right violence limited to militant neo-Nazi groupings like Combat 18. Rather, as responses to the murder on social media showed, ‘elements of extreme rightwing ideology have an appeal way beyond the scene itself’. Approval of violence is an integral part of a ‘mosaic’ far-right movement in Germany that, most alarmingly, reaches deep into the security services themselves.