What the taboo on race fakery might be hiding; how it’s getting hard to write an objective history of Soviet modernism; why so many Russians believe the myth of peaceful empire; and how neutrality is Austria’ most self-serving fiction.

The new issue of Wespennest – entitled Gefälscht (‘faked’) – starts out by observing that ‘fact and fiction’ have again become ‘meaningful as ideology-critical binary categories’. How else, write the editors, ‘can liberal societies defend themselves against the erosion of their democratic achievements and the delegitimization of science through interest-driven “post-factual” manipulation? How can we combat propaganda, crime, historical falsification and art forgery if we cannot assume the possibility of objectively determinable truth or authenticity?’

And yet… ‘fact and fiction cannot always be neatly separated. Reality brings forth myths and stories that unsettle and bend the concept of truth. The postmodern turn had its reasons: facts are changeable, “a kind of natural affinity” exists between lying and politics, and discourse unmoored from reality cannot be countered simply through reference to truth or falsehood.’ 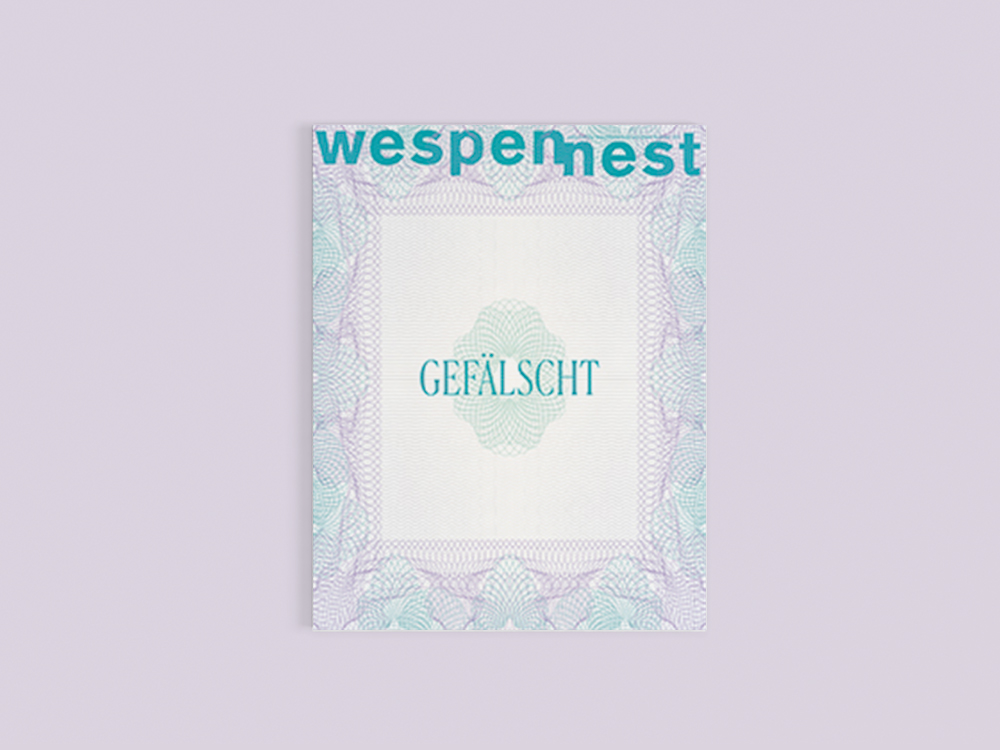 The persistence of that most enduring of myths – the nation – is the theme of Wolfgang Müller-Funk’s discussion of the Austrian collective imagination: a combination of Habsburg nostalgia, state neutrality, and Zwentendorf (the nuclear power plant near Vienna, decommissioned before entering into use after a referendum in 1978, leading to a ban on atomic energy the same year).

‘In Austria, at least, Kant’s dream of eternal peace is realized in a Zweig-esque world of safe reality. With its “no” to nuclear power, the symbol of insecurity, little Austria, the cultural superpower, holds out a gift to its neighbours for the future. This is how Austria anticipates Europe, if not the world. It’s just a pity that other states haven’t realized this or don’t take it seriously.’

Unlike other states, Austria has clung its neutrality since the Russian war on Ukraine. In Austria, writes Müller-Funk, neutrality is almost unanimously seen as as a higher good – an ‘act of high duplicity, because we only take our neutrality seriously when it suits us’. When the current chancellor recently declared that there was no debate on neutrality to be had, he knew not just that no one would disagree, but that his approval ratings would rise. ‘Austrian neutrality appears written in the stone of an electorate that, despite all rationalist euphoria, wants to be deceived.’

While there is wide agreement today that gender is not physically defined and that gender can be ‘affirmed’ or ‘reassigned’ in order to restore an ‘authentic’ identity, the idea that race and racial identity is equally subjective is universally rejected. As Andrea Roedig writes, considerations of racial community and collective racial experience combine with concepts of (pop-)cultural appropriation to make ‘race-faking’ a taboo.

‘In the good old days of Judith Butler euphoria, one could suppose that gender and race could not be faked because there was no original version of the copy. We all “performed” – or were “read” – and it was only the performance that led to the belief in such a thing as original sexual or ethnic identity, a real foundation. That’s what we thought then. Some remain enthusiastic about the constructivism of the 1990s, but others don’t. As if we can’t completely dispense with the Aristotelian definition of truth as adaequatio, because we need some guarantee of truth, especially in political debate. So now we get genuine afros, real gender identities, and discussions about the correct position of speakers, i.e. who or what it “is” that speaks.’

What does this say about how ‘authenticity’ is deployed? ‘The truth – or what we accept as truth – moves around, like a spotlight pointed here and there. It depends on the political debate. Among other things. And on what has value and what doesn’t. Because only when there is something to be gained is it worth distinguishing between original and fake.’

Konstantin Akinsha writes on the booming industry for forgeries of Soviet modernism.

‘The faking of the Russian avant-garde did not give birth to its own van Meegeren, his genius of falsification is not required. In our strange world, populated by art historians who have turned into crooks and crooks who pretend to be art historians, the standard of forgeries is entirely consistent with the standard of certificates issued to confirm their authenticity.’

Citing some particularly egregious examples, Akinsha argues that the artistic illiteracy of many forgeries would be amusing were it not for the regularity with which they appear in museums and catalogues – not to mention the internet: Wikimedia and Pinterest are the major disseminators of artistic disinfo. ‘The growth of fakes that fill the pages of art history publications, museum halls, and the World Wide Web calls into question the very possibility of creating an objective history of Russian art.’ (Russian version)

Generations of Russians have been taught that Russia’s imperial expansion took place peacefully. In this narrative, write Irina Borogan and Andrei Soldatov, ‘Russia was always reacting to western aggression. ‘It should come as no surprise, then, that a great many people truly believe that NATO has been plotting against Russia for decades, drawing ever closer to the Russian borders, waiting for a good moment to attack.’

‘It is the history taught at school that defines the national mentality. The school curriculum and the national literary canon: this combination creates the emotional and deeply entrenched perception of what is acceptable and noble, and what is not; the national pantheon of heroes and catalogue of villains.’ (Full article in English)

Millions of internal migrants were sent back to their homes across India since the first coronavirus lockdowns. By the time restrictions lifted, many women had already lost work, and faced compounding layers of inequality.