Democracy is being denied by the EU’s leaders, writes Harald Schumann, journalist with Investigate Europe, in Blätter für deutsche und internationale Politik. At fault are not ‘Brussels bureaucrats’ but the Council of Ministers, including its 150 working groups and Council of Permanent Representatives. Unlike the Commission, these bodies meet entirely in camera. ‘For citizens,’ writes Schumann, ‘Europe’s most powerful legislator is de facto a black box. This is dangerous and makes legislation highly vulnerable to the influence of well-organized economic interests. It also enables crooked deal-making in which individual governments assert their national interests before the European common good.’

Examples of legislation blocked by the Council of Ministers include the EU financial transaction tax, presented by the Barroso Commission in 2011. ‘By targeting governments in France and several small countries, the financial sector was able to postpone the entire project, demanding ever more restrictions. Now, 10 years after the great reform promises of 2009, this project has effectively died.’ The same fate threatens the ePivacy Regulation, presented be the Commission in 2017. Due to come into effect this year, it has been stalled by the German government. The list goes on: the British have hindered regulation on hedge funds, the Germans have thwarted the anti-money laundering law, the Dutch have assisted the food industry in extending fishing quotas, etc. etc.

But the most egregious instance of unaccountability is the Eurogroup, responsible for the creation of the ESM in 2012, according to Schumann, ‘a strategic mistake and the worst attack on the European project since the EEC was founded’. Macron, with his proposals for a Eurozone budget, an elected Eurozone finance minister and a Eurozone parliament, was addressing this democratic deficit. However, he has been rebuffed by Merkel and the German coalition, who insisted that budgetary policy in the Eurozone continue to be controlled by the unaccountable technocrats of the ESM.

All of this encourages Euroscepticism, writes Schumann. However, dreams of ‘taking back control’ fatally misunderstand the extent of economic and legal integration in Europe: ‘Returning to the nation state is not a realistic option’. ‘For this reason, anyone who really wants Europe to remain peaceful and to assert itself in the world must fight for European legislation finally to be democratized in such a way that citizens can understand and accept the EU and its institutions.’

Germany: Blätter editor Albrecht von Lucke writes on the state of the German constitution on its seventieth anniversary. Germany today, he argues, has forgotten its republican traditions. The rise of the New Right has renewed longings for a strong leader able to discipline society, parliament and the political parties. ‘Constitutional patriotism’ today means not just endorsement of human and civil rights, ‘but also and above all our democratic institutions’. 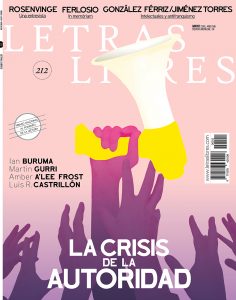 Letras Libres focuses on the challenges facing democracies in an era of diminishing institutional authority. Talking to editor Daniel Gascon, former CIA analyst Martin Gurri (The Revolt of the Public and the Crisis of Authority in the New Millennium, 2018) says that this ‘crisis of authority’ all began in 2008, when people’s faith in global financial experts and their establishments was shattered. Over the past decade, anti-austerity movements such as the Indignados, and latterly the Yellow Vests, have gained credit for their efforts to hold governments to account. However, Gurri ultimately questions the motives of such groups as ‘people who benefit from the system that they try to destroy’.

Disinformation: ‘Knowing and believing that we are right satisfies us,’ writes Luis Castrillón in an article on today’s tendency to discount data and scientific research. ‘And this satisfaction is linked to the need to believe in something, to find meaning in what happens, particularly at a time when the large volumes of information to which we have access have themselves sowed seeds of doubt.’

Music: Reading the news helps ‘kill the ego’, singer-songwriter Christina Rosenvinge tells Aloma Rodriguez: ‘That miserable ego that we all have, that ego hungry for recognition and for love that you have to tame and keep in a corner.’ 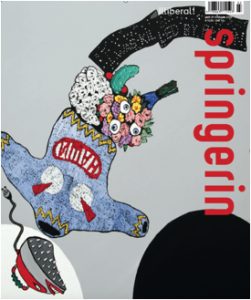 ‘What exactly does one mean when one claims to be liberal?’ Introducing an issue of Springerin entitled ‘Illiberal!’, the editors grapple with the ambiguities of the concept and, more pressingly, with attempts to narrow its semantics. ‘Instead of ensuring that civil liberties and human rights are extended to everyone who does not enjoy the privilege of being white, male or of western origin, the opposite approach is deliberately pursued. The limits of the Enlightenment, long the subject of controversy, are re-affirmed “proactively”.’

Artistic freedom: In connection with an antisemitism row at last year’s Athens Biennale, artist Roee Rosen and critic Ana Teixeira Pinto discuss what is – and isn’t – defensible as artistic freedom. ‘I’m fed up with the increasing rigidity of moral positions in the art world today,’ says Rosen. ‘For me, it endangers the critical and free position to which art should be entitled – and I don’t mean that this should excuse neo-fascist extremes of any kind’. Pinto counters that to invoke ‘artistic freedom’ is itself moralistic. ‘Appeals to freedom in the narrow sense can (and often do) collide with freedom in the broader sense. I believe that the idealization of “artistic freedom” contributes to political unfreedom, because it generates a toxic and intimidating environment.’

Repressive tolerance: To subordinate politics to the perpetual threat of civil war has historically served to prevent the working class from constituting itself as a political subject, argues journalist and author Felix Klopotek. Those who advocate ‘talking to the right’ are less liberal than they give to believe: ‘The liberal idea that the right can be discursively contained has its material basis in a concept of state that institutionalizes social suspicion, in order to protect citizens from themselves, by committing them to moderation.’

Cleavage: Political scientist Donatella della Porta provides a guide to conceptualizing the rightwing ‘backlash’. ‘Cleavage’ is particularly useful term: ‘With the erosion of protected property rights and increasing cultural diversity, cultural competition adds to economic and political competition. A cultural and an economic dimension intersect around an integration-demarcation divide. This evolution is facilitated by the pacification of traditional cleavages around class and religion, by high levels of economic development, by increasing immigration, and by electoral volatility. Mobilized by the right, the Weltanschauung of the losers is dominated by cultural demarcation, often expressed as exclusivist nationalism.’ 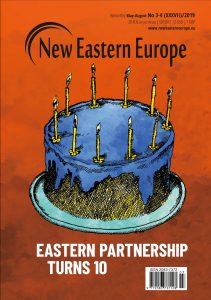 ‘The European Union’s policy towards the East is one that is never easily explained nor well understood among Europeans and their eastern neighbours’, write the editors of New Eastern Europe. The tenth anniversary of the European Partnership is therefore ‘an opportunity not only to celebrate but also to reflect on what has been achieved and how this policy can be shaped for the future’. Contributors ‘all agree that there is still plenty of work to do if the Eastern Partnership is to truly transform Eastern Europe’.

A continent without dividing lines: While serving as foreign ministers of Sweden and Poland, Carl Bildt and Radosław Sikorski were the first to propose an Eastern Partnership in May 2008. The idea, they write, was to include countries immediately between the EU and Russia (Belarus, Ukraine and Moldova), as well as the three countries in the South Caucasus (Armenia, Azerbaijan and Georgia). ‘This was a part of Europe that Brussels had, to some extent, been neglecting, not always by design, but rather by default’.

The original vision of a ‘continent without dividing lines’ was radically altered by the events in Ukraine in 2013. The Kremlin’s announcement in the summer of the year of a ‘Eurasian Union’, followed by its invasion of Ukraine and intervention in Donbass, ‘indicated that Putin was prepared to do whatever it took to bring the member states of the Eastern Partnership back into Russia’s fold’. Five years later, ‘the most remarkable fact is that the Eastern Partnership still exists’.

Betwixt and between: The European Partnership has been ‘carrots but no sticks’, writes James Nixey. ‘You can argue that some EaP states have made progress in the last ten years. But you cannot argue it was because of the Eastern Partnership.’ If Europe does not change its approach, ‘it risks these countries forever being seen as “post-Soviet” (or worse, Russian playthings) – condemned to a “betwixt and between” existence, with commensurate antipathy towards the West at the political and popular levels.’

1989: Eugeniusz Smolar, who left Poland in 1970 after being imprisoned as a dissident, became a publisher of the tamizdat journal Aneks and later a journalist for the BBC, recalls the symbiosis between samizdat, tamizdat and western radio during the final decades of communism. Paulina Codogni explains the continuing significance of the Round Table in Polish political life – and the controversies that continue to surround it. And Eugen Stancu, publisher of Romanian journal la.Punkt, writes on why Romanians’ dream of a better life in 1989 has today become the dream of a better life abroad. 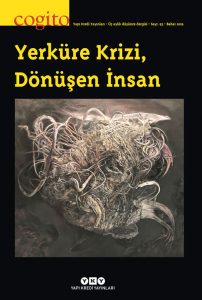 ‘In the face of a climate catastrophe that cancels the future and opens a huge fracture in the understanding of history,’ writes Cogito editor Şeyda Öztürk, the new issue of ‘is made up of writings that trace the possibilities of a comprehensive and transformative cohabitation in the narratives of the past and positions of the present’.

Philosophy: Fatih Altuğ looks back to the most famous work of the Twelfth century Arab Andalusian polymath Ibn Tufail: Hayy ibn Yaqdhan (translated into English as The Self-Taught Philosopher). The allegory concerns the life of Hayy who grows up on a deserted island. Isolated from humanity and inspired by the natural world, Hayy teaches himself astronomy, philosophy and religion. While the text may have influenced Daniel Defoe, ‘Hayy is not like Robinson, who is cast upon a desert island as a mature man; he comes to know himself on the island/as an island.’

Altuğ tracks Hayy’s progression from a helpless child feeding on antelope milk, to the boy who assists and protects the ageing animal, and finally to a fully-realized individual. He says the text achieves that final stage through loss: ‘with the death of the antelope the boundary between Hayy and the animal world becomes completely defined’. As the autodidactic castaway achieves religious enlightenment through his own reason, problematic encounters with other humans eventually teach Hayy that ‘comradeship is possible neither with animals nor with people. But the text presents this state, less as a loss of possibility, and more as an obligatory isolation for those who seek such a truth.’

Epic: Delving even deeper into the human past, Özen Nergis Dolcerocca engages with the Epic of Gilgamesh not within the common frame of a tale of friendship and loss, but rather as a ‘criticism of urbanization and the unending inexhaustible war that man wages with nature. An ecological anxiety dominates the entire text from start to finish.’ In the conflict between Gilgamesh and Humbaba, the guardian of the Cedar Forest, the epic reveals its ‘essential irony,’ Dolcerocca says. ‘As we wrestle with nature, it sends us greater catastrophes.’

Also: Nazile Kayalcı discusses motherhood and its possibilities as a concept that allows a common ground that embraces all life. And Zeynep Talay Turner traces the border between the human and the animal, inspired by a combination of Derrida and Werner Herzog’s documentary Grizzly Man.

Translations: Dipesh Chakrabarty on the climate of history; Bruno Latour on terrestrial politics; and Kate Brown on Chernobyl.

This is our 9/2019 Eurozine review. Click here to subscribe to our reviews, and you also can subscribe to our newsletter and get the bi-weekly updates about latest publications and news on partner journals.

Published 25 May 2019
Original in English
First published by Eurozine

Race in Europe and the US