With Russia closing its gas pipeline to Europe, predicted economic downturns have hit the markets. Skyrocketing energy bills mean production cuts and job losses, as well as a cold winter ahead. With a feared backlash to the Ukrainian cause, discussion between frontline war journalists contextualizes Russia’s power-play tactics.

PEN Ukraine’s #DialoguesOnWar continues with a conversation between Angelina Kariakina and David Patrikarakos. This is a transcription of key moments from their conversation. You can check out the recorded conversation here.

David Patrikarakos: It is always a pleasure to speak to Angelina, one of Ukraine’s prominent journalists, who has been in Ukraine throughout the war.

When I visited, I went to see the southern front, I went to Donbas. What struck me was the morale of Ukrainian troops. No one was interested in surrendering or making any territorial compromises. Putin got the reverse of everything he wanted. He wanted to destroy the Ukrainian national feeling and now it is higher than it has ever been. He wanted to make the country militarily weak – it has never been stronger. He wanted to divide the West – he has for the moment united it.

It seems to me that Ukraine became an independent state in 1991, but it became a nation in 2014. Is this your independence war?

Angelina Kariakina: Indeed it is, on the one hand. On the other, it is a war for existence. It is a war for the mere fact of being Ukrainian. All of us are targets, just because of this. This is probably the most important point to stress.

But getting back to the issue of morale. Of course, it is something that keeps the country and its society strong and mobilized. But it is also exhausting, both in terms of finances and physically. We have internal resources to raise money very quickly. We help each other, stay in touch and volunteer extensively. But Ukraine, at a certain point, will face economic problems, and all the attacks against civilian infrastructure aren’t going to make our lives easier. There is still the need for very strong support for Ukraine, and it will only grow in the future.

We spend everything we have right now on supporting our army. Even though it is the best equipped it has been in years, every family will still buy something for a soldier: a better helmet, a better pair of shoes, something for the regiment, etc. This is something we will keep on doing. It is impossible for the state to equip everyone with everything.

David Patrikarakos: A soldier in Donbas said to me: ‘The only thing the government gave me is my gun and bullets. Everything else was crowdfunded and donated.’ I don’t think people realize the degree to which the Ukrainian army is funded by the very people who are already struggling.

Angelina Kariakina: You have been to the frontlines and seen that, in this war, you don’t really use a gun. You use heavy artillery. You need tanks, military vehicles and rocket launchers like HIMARSes. The state is capable of giving you a gun and bullets, but they aren’t always going to be used in this kind of war.

David Patrikarakos: As things progress, it is unlikely that Russians can defeat Ukraine’s militarily now. But what they can do is try and sit on the country economically. Are we entering a phase where Russia tries to slowly strangle Ukraine because it failed to defeat it militarily? And what needs to be done about it? Isn’t it about more than just assistance? What about political action on an international level?

Angelina Kariakina: For political action, you need informed societies, informed audiences. Of course, the world’s eye is on Ukraine right now. Foreign media are doing a great job of covering events that are taking place. But we understand that it is a breaking news situation. And just like any breaking news, it often lacks context.

The story that recently unfolded before our very eyes, in front of the whole world, was that of an approaching famine, involving many countries of the Global South.

What the world needs to recognize is the context and implications of Russia’s actions. It isn’t only about Russia attacking Ukraine. The world doesn’t know much about the famine of 1932-1933 when the Soviet Union and Stalin starved millions of Ukrainians to death, because they didn’t want to be part of the Soviet Union. With an angle of Russian colonialism, we could engage more media from the Global South to take a closer look at Ukraine, specifically at this story.

David Patrikarakos: Exactly. People need to understand that Africa is also a front of Russia’s war against Ukraine. In February, when the war started, I was in Accra, Ghana. On electronic billboards in the capital of Ghana, I saw the Ukrainian flag. There was a real outpouring of support. What Russia was banking on was how long this support would last if people didn’t get their grain.

I think it’s true that Ukraine is fighting not only for itself but also for the West or Europe. What is being hammered out on the battlefields in Ukraine is not just the future of Ukraine and Russia. If Ukraine had fallen in three days, like Putin’s asslickers told him it would, then they would be halfway to Georgia and Moldova right now. Because why wouldn’t they? Why does this matter to everyone interested in the safety of Europe, the security of Europe and the security of a broader Western alliance?

Angelina Kariakina: This is a good question. Let me answer from the perspective of journalism and media. If you are living far away from the frontline, it is hard for you to feel what it is like to be under a missile attack, to go downstairs several times a day and stay in a bunker for several hours, what it is like not to have access to water or medicine. We faced it during these eight years when the Russian war was contained in the eastern part of the country. The rest of us could live our normal lives. And I understand why the rest of the world, including some western European countries, doesn’t feel this threat so close to them.

However, this is also an ethical question. We know that the time to heat our homes is coming and that discussions in Germany, for example, may change critically in favour of ‘talks’ between Ukraine and Russia. This is one of the Russian narratives, and it is working. European countries need to understand what they are willing to pay for their peace. In our view, this discussion looks like thousands of Ukrainian lives are cheaper than a gas bill. Are those the European values that millions of people were fighting for for centuries? As you pointed out, it is not just a Ukrainian war, it is a war for European values. 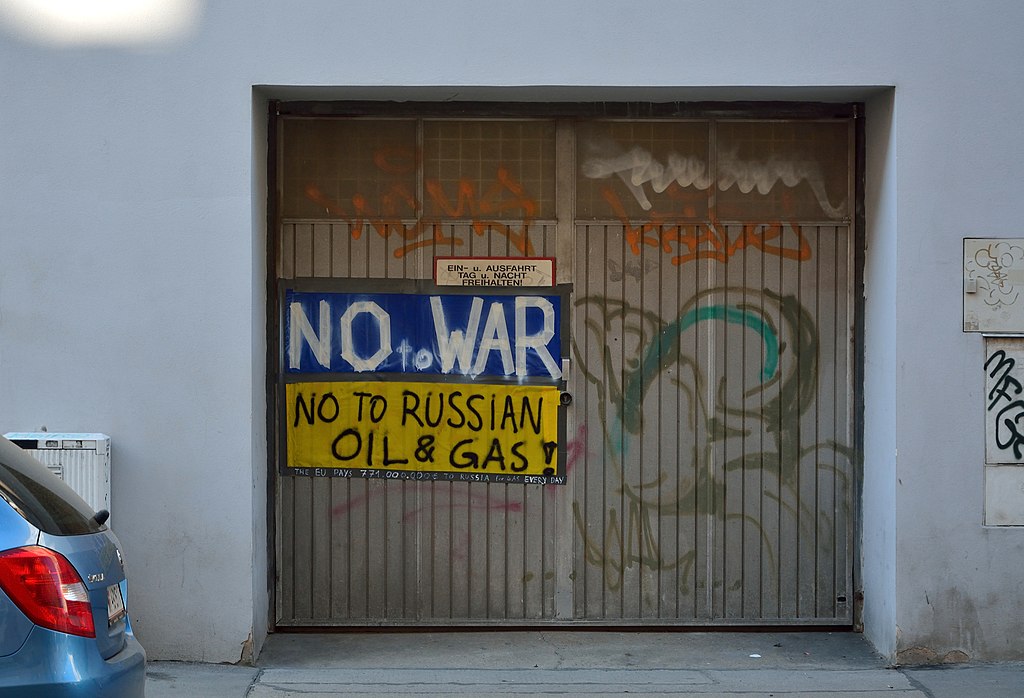 David Patrikarakos: You are talking about gas. Europe is going through an energy crisis because it gets its energy from a rogue state. We understood with China, COVID and the supply chain that you cannot rely on a rogue state. It is in European interests, apart from an environmental aspect, to get themselves off Russian gas and oil. Millions of people beyond Ukraine are going to be suffering this winter, and it is because of Russian aggression.

Angelina Kariakina: And I think it is also a question of political responsibility. Ukraine shouldn’t be the one to blame. With the approaching energy crisis, there might be pressure on Ukraine to sit down and negotiate with Russia, which, at this very specific moment, doesn’t seem like a solution because there is nothing to negotiate, apart from the fact that we need to exchange our people. Any other general negotiations don’t seem possible, because, as I said before, this war is against Ukraine merely being a state. You cannot negotiate your existence.

David Patrikarakos: It’s a very interesting lesson in power politics, and a sad one too: people love a winner. The West has been great in supporting Ukraine because it became clear that Ukrainians started to win and beat the Russians. For me, it’s all coming back to what I saw. I went to all three fronts, and you have seen them as well. It is clear that at least in the first stage, the military battle was lost by Russia. But now the game has shifted. The Russians know that media cycles are fickle. They are banking on the fact that attention is going to drop, news cycles are going to move on, and people are going to start to forget. That, to me, is a big challenge right now. We need to keep this in the public consciousness.

It’s important to understand what country you are covering. Unfortunately, for many global media, Ukraine had been covered from head offices in Moscow for decades. Global media have not been present in our country for a long time.

Ukraine is not only about war. Ukraine is a very interesting democracy, and with many countries facing crises of democracy and trust in institutions, it is an experimental hub for many practices that could be a breath of fresh air for many societies.

Covering Ukraine and the war is not only a story of suffering and victimization. It is a very interesting mix of civil society, volunteering, working with local and central authorities, and interactions between different religious and national communities. I think lots of stories are missing from this war coverage. Despite this brutal war, Ukraine is still operating as a state, and this is important to highlight.

Angelina Kariakina and David Patrikarakos spoke on 28 June 2022. Detail of their discussion about grain transportation to Africa differs from the transcript, acknowledging how the situation has changed since the second half of July into August.