If the idea of freedom means anything, then surely imperialism is one way to negate it. And yet, for the last two hundred years the United Kingdom and the United States, two nations that draw deeply on the liberal tradition in their conception of statehood, were also the most powerful and far-flung empires in the world. A recent calculation has it that the United Kingdom has invaded around ninety percent of the world’s countries; the United States, even as of 2013, has military personnel deployed in about three quarters of them.1
Liberalism is plainly not the only path to empire, but the ideology can lead there, and has.

One does not need to espouse a kind of vulgar Marxism to suspect that one reason that this should be the case is that liberal democracy was, for a time, the modal politics of capitalism. Industrial capitalism developed first in the United Kingdom, where energy and commerce began the process of making the world modern. Capitalism demanded expanding markets for producers and for consumers. Ensuring that such markets exist was, even in liberal society, a question of politics and a matter for the state. And thus, potentially, of empire. Marx himself, never nostalgic for the “rural idiocy” of pre-capitalism, saw imperialism as a part of the path of world development that would make capitalism, and thus socialism, possible.

More conventional liberal imperialists than Marx saw the empire in those terms as well: most British saw their empire not as rapacious or predatory, but, on the contrary, an instrument of prosperity and peace. Multiplying industrial product augured for a prosperous future, and expanding ties of trade were thought to hold civilizing potential and, by creating bonds of mutual dependency, to make conflict less likely. This might have been the case between relatively equal trading partners, but the potential dynamics that would arise when the power of one partner far outstripped the other went unconsidered; this proved especially true since London became, for much of the world, the financial capital. There were places like Argentina that became deeply compromised without ever requiring full incorporation into the empire. Yet around the world, the threat of violence to ensure compliance remained very real; British ships bombed China and took Hong Kong, to give but two examples, and sat threateningly off the shores of others. As Lord Palmerston, then Prime Minister, put it in 1860: “It may be true in one sense that trade ought not to be enforced by cannon balls, but on the other hand trade cannot flourish without security, and that security may often be unattainable without the exhibition of physical force.”2 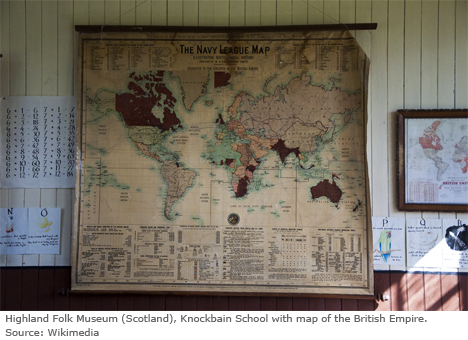 The empire that the United Kingdom acquired in the nineteenth century was ad hoc, but not accidental. What began as an empire of trade gradually became one of territorial possession, as threats from local rebellions, especially in the 1850s and 1860s, and from other rising European powers, especially in the 1880s and 1890s, challenged British control. The empire was diverse: it included local monarchies, protectorates, and a variety of weak and strong relations with the crown. Overlaying it all was the predictable veneer of racism: the more white-skinned the residents of the colony, the quicker the path to self-determination. Lucky enough, at least for the white residents of Australia and Canada; less so for black South Africans, who bore the brunt of the most vicious union of capitalism and imperialism of British imperial history. Freedom for Africans on their own was barbarism, went the imperial reasoning, and so a new kind of barbarism was imposed in its stead.

At the turn of the twentieth century, the process of transferring leadership for liberal empire passed from the United Kingdom to the United States. Each World War made U.S. dominance clearer, but the process began well before that, especially in Latin America. The Monroe Doctrine had long promised that the United States would object to the incursion of European imperialism in the Americas. But westward expansion by the United States at mid-century took half of Mexico’s territory, and with it the responsibility of suppressing native American groups who wished to be governed by neither state.3 In the 1890s, the U.S. role as regional hegemonic power was recognized by the United Kingdom, when it asked the United States oversee resolution of a boundary conflict between British Guyana and Venezuela. Following the brief war with Spain in 1898, the United States took the Philippines and Puerto Rico, and placed Cuba is in a state of compromised sovereignty.

For the next decades, intervention in the Caribbean Basin was a regular affair. “I was a racketeer for capitalism,” said Marine Major General Smedley Butler after his retirement, having overseen many of the occupations. “I spent thirty-three years […] being a high-class muscle man for Big Business, for Wall Street, and the bankers.”4 But acting on behalf of private interests was not dignified work for U.S. forces, and so the ventures were ennobled with liberal ideologies of freedom and democracy. In Nicaragua, where U.S. military presence lasted from 1912 to 1933, forces tried to reduce the power of local caudillos over elections, introduce competitive parties, and create a constabulary force that could ensure that could oversee a more liberal order after they left. When U.S. forces finally did leave, however, that head of well-trained and well-equipped force, none other than Anastasio Somoza, used his training not to enforce democracy but to take power for himself. His brutal rule, eventually passed on to his sons, endured for decades. Imposing Somoza had not been the U.S. plan, but, as with the United Kingdom before it, at most times the United States could live with friendly dictators that didn’t challenge its economic and security interests.5

U.S. imperialism was, for the most part, not territorial. It achieved what the United Kingdom had tried and failed in the nineteenth century: open markets and compatible regimes without the costs of formal occupation. It justified its actions with a similar combination of assertions about civilizational superiority, self-delusion about being paladin of democracy, and, in an extension of Monroe-Doctrine thinking, fears about the encroachment of foreign empires. With the advent of the Cold War, the U.S. self-conception of itself as a defender of freedom intensified, set against the enemy of foreign totalitarianism represented by the Soviet Union. In Europe, this was not a transparently absurd, and scholars have written much about the United States as an “empire by invitation” there. But threats to liberal order in places dominated by the United States could be brutal. Latin America suffered more than its share; the CIA bungled its way to a successful coup in Guatemala in 1954, contributing to the beginnings of a forty-year civil war. Though a certain amount of economic nationalism could be tolerated when Cold War security interests were at stake, the United States consistently acted to undermine left-wing movements. In the 1960s and 1970s, the bloody war in Vietnam and U.S. support for dictators in Latin America and the rest of the world put the lie to the idea of the United States as a benign empire. As it had with the United Kingdom before it, the threat of violence underlay the liberal order.

In the last few decades, growth in the world economy, much of it led by states pursuing strategies that would have to be described as illiberal and mercantilist, has lessened U.S. dominance, and the economic crisis of recent years made plain the limits of U.S. power around the globe. But if the age of liberal imperialism seems on the wane, a liberal order remains, as do the lessons of the last two centuries: exchange and contract between free nations, as between individuals, works best when power between them is close to equal. Extreme inequalities can make freedom of choice an illusion. How the liberal tradition decides to make sure that power is distributed evenly enough to make its systems work well remains one of the vital projects of the next century for those who believe in the promise of a liberal order without imperialism.

Stuart Laycock, All the Countries We've Invaded: And the Few We Never Got Round To, The History Press, 2012.