The war in Ukraine gave Lithuanian anti-gender movements a pretext to postpone debates on civil rights issues, deemed all too divisive in times of geopolitical turmoil. Behind the rhetoric of internal unity, however, is a faithful reproduction of the Kremlin’s crusade against ‘gay propaganda’ and the ‘rotten West’.

No later than two days after the start of the war, a non-governmental organization with the Orwellian name ‘Free Society Institute’ sent a public letter to the Lithuanian parliament urging it to postpone the hearing of the gender-neutral Partnership Law. This bill has been high on the agenda of the anti-gender movement in Lithuania, together with a number of other ‘controversial’ issues, such as the ratification of the so-called Istanbul Convention (the Council of Europe Convention on preventing and combating violence against women and domestic violence) and the decriminalization of the possession of small amounts of drugs.

Exploiting the terror currently gripping Lithuanian society, these individuals and groups decided to act swiftly in order to erase these human rights issues from the political agenda for an unforeseeable period of time.

The irony, or, rather, the predictable tendency of these developments is that the position of these anti-gender activists repeats verbatim the ‘traditional values’ ideology promoted by the Kremlin.

The Free Society Institute’s letter requested the Lithuanian Parliament to refrain from discussing issues that might ‘divide Lithuanian citizens’ and threaten the stability of the ‘traditional family’ and the very basis of society. In a matter of a few days, their arguments were echoed by the member of parliament Agnė Širinskienė, a theologian and a lawyer, and a known advocate of conservative causes. She insisted that due to the ‘geopolitical tensions’ in Europe, the ‘divisive’ questions should be erased from the agenda, and even registered a motion to prevent the bill from being debated in the parliamentary spring session. In the meantime, the MPs were flooded with threatening emails and text messages by defenders of the traditional family urging them not to discuss the Partnership Law.

These episodes from Lithuania will be familiar to anyone dealing with anti-gender lobbying anywhere else in Europe or beyond. For some decades now, ultra-conservative movements around the world have been gathering around what they see as the defence of ‘traditional values’ and the ‘natural family’. In reality, their agenda is purely oppositional – it is opposed to LGBTQ rights, the right to safe and legal abortion, gender equality initiatives, sex education, and other progressive human rights issues.

At the forefront of these traditionalist forces, as the self-declared main defender of the traditional family and the last bastion of Christian values in Europe, we find Russia.

While in Western European countries the anti-gender movement is opposed to the liberal state, which enforces regulations promoting gender equality and protecting LGBTQ rights, in the case of Russia the anti-gender ideology is state-sanctioned and officially approved1.

Since Putin’s return to power in 2012, resistance to the so-called ‘gender ideology’ and the ‘liberal dictatorship’ of the West has become Russia’s civilizational mission. The global ultra-right-wing movement has long seen Russia as the ‘saviour of the Christian world’, representing traditional values and the ‘natural’ family2. The Russian state has implemented homophobic laws, it persecutes sexual dissidents inside the country, and promotes anti-LGBT propaganda abroad. 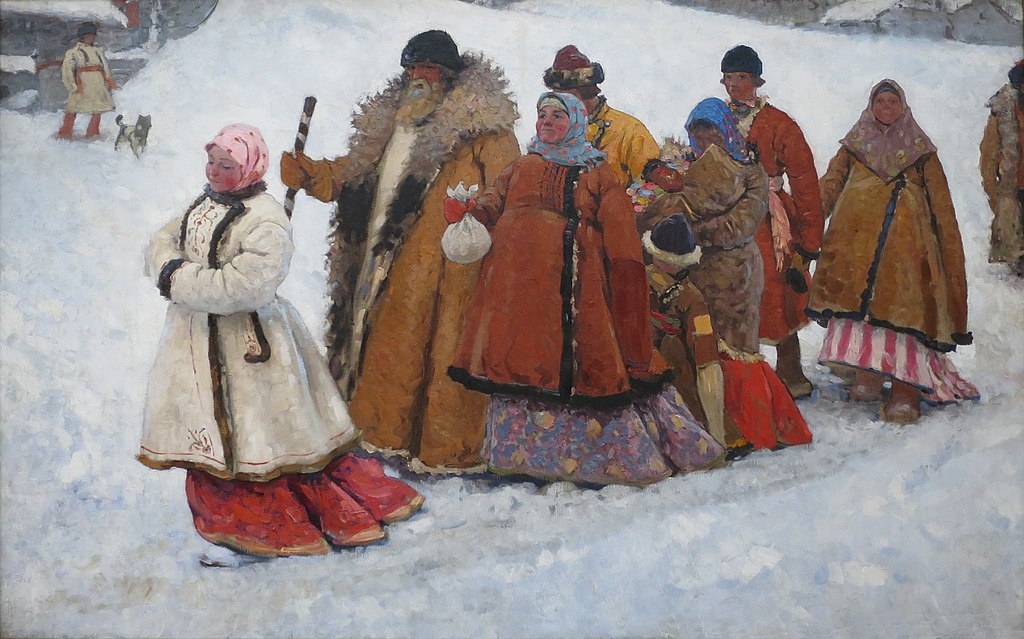 The fact that the Free Society Institute reiterated Russian propaganda clichés at the very moment Putin had just started a full-scale invasion of Ukraine should not come as a surprise. In 2019, supported by Lithuanian tax-payers’ money, this organization participated in the World Family Congress in Italy. The congress was attended by the Russian delegates, some of them with clear connections to the Kremlin and Russian oligarchs, as Lithuanian journalists have revealed.

This annual event is dedicated to fighting against LGBT rights, children’s rights, gender equality, reproductive rights and liberal ideas in general. Russia has participated in the organization of this global right-wing network since its inception in 1995, and has played a very prominent role in it since 2014. The country uses this and other international platforms to entrench its image as a moral world leader and an important global political actor.

Given such close ideological ties, it is only predictable that while Russia is launching a war in Ukraine, the Free Society Institute is waging its own little war within Lithuania, aiming to prevent the ruling coalition from accepting the legal changes which would ensure a dignified existence for all Lithuanian citizens, including LGBT people.

Investigative journalists in Lithuania have already revealed the ties between some of the most active defenders of the ‘traditional family’ in the country and the corrupt Russian state. Last year, for example, Vilnius witnessed a mass protest, the so-called ‘Great family defence march’, which featured many well-known Kremlin propagandists, as well as slogans about the ‘rotten West’ and American imperialism. Most strikingly and controversially, Lithuanian President Gitanas Nausėda found it appropriate to greet the participants with a pre-recorded speech about the importance of the traditional family. This made the president increasingly popular in right-wing circles, and more popular overall than the ruling coalition.

In Lithuania, the debates regarding LGBT rights are inseparable from issues of Russian political and cultural influence. Even if we are not talking about the individuals and organizations funded by the Kremlin, we have to realize that many homophobic tendencies in the country have followed the Russian blueprint.

Lithuania has still not managed to reverse the changes to the law on the protection of minors against the detrimental effect of public information, which was amended in 2009 to include a clause which stipulates that information ‘which expresses contempt for family values, encourages the concept of entry into a marriage and creation of a family other than stipulated in the Constitution of the Republic of Lithuania’ should be limited.

The original formulation of the law proposed restricting information ‘which promotes homosexual, bisexual or polygamous relationships’, but it was changed after criticism by the European Parliament. The idea for the amendments was essentially copied from Russia, where a ‘gay propaganda’ law was proposed in 2011 for the first time and later successfully implemented on the federal level3.

While some of the homophobia in Lithuania can be attributed to the Soviet legacy, and some probably to Catholic conservatism (like Poland, Lithuania is predominantly a Catholic country, with the Church holding great political influence), it is beyond doubt that Russia has played an enormous role in forming anti-LGBT opinions and shaping the very vocabulary on these issues. One need only think of the popularity of the derogatory word ‘tolerastas’, a combination of the Lithuanian words for ‘tolerance’ and ‘pederasty’, directly borrowed from the Russian anti-LGBT rhetoric.

Obviously, not every organization or individual spreading anti-gender rhetoric in Lithuania or resisting the ratification of the Istanbul Convention due to the dangers of ‘gender ideology’ has been directly funded by the Kremlin. However, the binary language dividing the world into the ‘rotten West’ and the ‘defenders of Christian morality’ in the East feeds into the ideology promoted by Russia. This ideology works for the Russian geopolitical imperial goals, it is promoted by the Russian religious and political elites, and it is in no way useful to independent Lithuania.

Let us compare, for example, an article published on the Lithuanian right-wing website Pro Patria a week after the start of the war in Ukraine with some statements by Russian religious elites. The author of the article expresses his fear that the war might be used by sexual minorities in Lithuania to stage a ‘sexual revolution’.

He is also concerned about the tendency in Lithuania to see those opposing LGBT rights as being pro-Russian. To rebuff this claim, the author goes on to argue that while Ukraine is fighting against Russian oppression, the country also resists ‘LGBT propaganda’ and upholds ‘traditional family values’. But, unlike Russia, he claims, it lacks the resources and political will to truly resist the pressure from the West. Hence, the author concludes, not all anti-gender activists are pro-Russian.

The article further implies that the West, and mainly the United States, are promoting LGBT propaganda in Ukraine, against the will of ‘ordinary’ Ukrainians, and that Ukraine’s entry into the European sphere of influence is creating the conditions for a sexual revolution (whatever that means).

By this perverse logic, one should be glad that Russian military aggression has stopped this malicious Western plan. Indeed, one of the main organizers of the ‘Great family defence march’ in Vilnius last year, Marius Gabrilavičius, expressed support for Putin’s ‘special operation’ to cleanse Ukraine of ‘the Sorosists’ soon after the start of the war. It is likely that he, and those similarly inclined, would support a similar operation in Lithuania too.

By way of comparison, let us take a look at the infamous sermon Patriarch Kirill of Moscow gave just three days after the appearance of the aforementioned article. On 6 March, the Patriarch of the Russian Orthodox Church, an institution which has been dutifully supporting Putin’s policies, justified the military aggression in Ukraine (he mentioned only the Donbas, in line with the official narrative) with the alleged defence of the values of the Christian world. 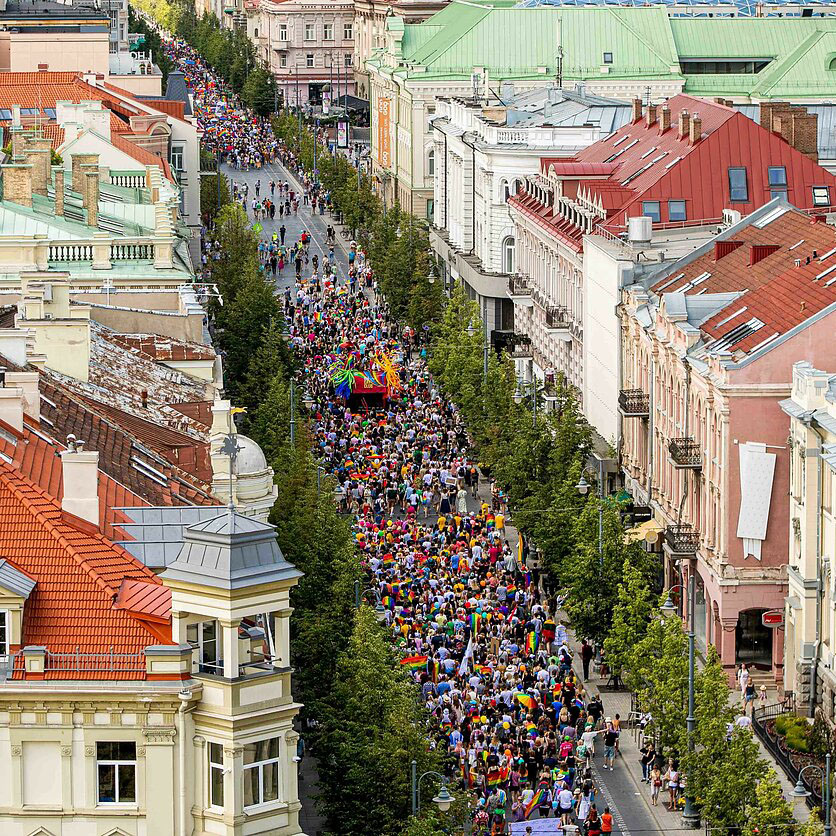 According to the Patriarch, the ordinary people of the Donbas have been resisting the values imposed by ‘the powerful of the world’ (meaning the West), the values symbolized by gay pride movements. Those who refuse to accept those values, and refuse to have a gay pride parade, will allegedly be made to do so by ‘brutal force.’

Such stories turn reality on its head, somehow managing to blame the LGBT movement and the West for the Russian military aggression in Ukraine (which at the same time does not exist, according to Russian propaganda at the time). The truth is, of course, that Russia started a completely unprovoked and brutal large-scale war against a neighbouring country because it felt that Ukraine was drifting away from the Russian sphere of influence, aligning itself with the West and its democratic institutions.

Lithuanian anti-gender activists have learned the narrative of the ‘rotten West’, its ‘corrupt influence’ and ‘the money of Soros’ so well that too often they sound like an echo from Moscow. Now, hopefully increasing awareness of the dangers of Russian propaganda in Lithuania will become a true disservice to their cause. Resistance to same-sex partnerships in Lithuania can hardly be dissociated from acceptance of the worldview promoted by the Russian state.

This is a translated and abridged version of an article which originally appeared on the largest Lithuanian news website, delfi.lt in March 2022. Some explanations have been added for an audience unfamiliar with the local context. The Lithuanian Parliament kept the gender-neutral Partnership Law on the parliamentary agenda, resuming the debate in June 2022.

Elżbieta Korolczuk and Agnieszka Graff, Gender as ‘Ebola from Brussels’: The Anticolonial Frame and the Rise of Illiberal Populism, Signs. Journal of Women in Culture and Society, vol. 43, no. 4, Summer 2018.

Celebrating the start of LGBTQIA+ Pride 2022: in Brazil trans activists rearticulate language and identity, taking the political campaign trail to greater visibility, recognition and a sense of belonging, helping save lives through collective action and knowing disobedience.