Why, in times of crisis, we need to recognize the qualities of failing; on emancipation through creative cooperation and how to activate the commons; and a parallel history of Arab-Israeli politics. 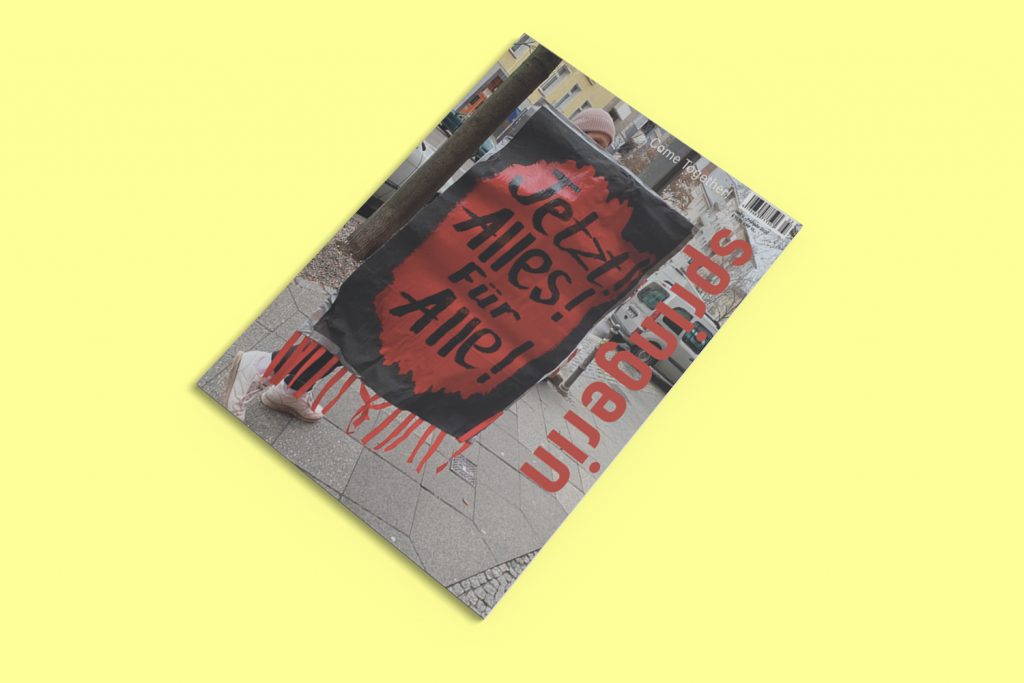 How we ‘come together’ will assume new significance after the pandemic, proposes Springerin: social, cultural and ethnic integration will need to be championed anew and cognitive capitalism’s tight hold on social isolation counteracted. The issue considers whether common space or radical trial and error might be more effective for future inclusion.

Ewa Majewska calls for ‘weak resistance’ to empower the powerless. Appropriating sustainable development’s slogan ‘The future is now’, she argues that in times of crisis, we need to recognize the qualities of failing rather than veering between heroic action and melancholic despair.

Historical examples include Rosa Luxemburg, who observed lessons in ‘learning from failures, and failing better’, and Martin Luther King, whose dream of equality was all about the ‘need to practice, to fail, and to be equal better’. Weakness, writes Majewska ‘can be seen as a beginning of transformative action, as a shifting point, a moment of mobilization. Perhaps we don’t need another hero. We can act together instead.’

Stavros Stavrides proposes commoning as a means to empower the marginalized. He takes the established notion of commons as resources for all and incorporates an active element: ‘Contemporary endeavours to re-appropriate the city are not only a product shared by everyone, but also a process developed by everyone through sharing.’ Quoting Lefebvre’s ‘right to the city’, Stavrides proposes emancipation through creative cooperation.

Leading the way are the refugees and local activists in Athens who commandeered the disused City Plaza Hotel for a self-managed accommodation and support centre; La Toma, the movement of unpaid supermarket workers in Rosario, Argentina, who ‘take’ the store and turn it into a shared socio-cultural space; and the institute for indigenous people in San Cristobal de las Casa, Mexico, which incorporates traditional wisdom to empower minoritized citizens. Shared action can fill a humanitarian gap and tackle social issues in supportive environments: ‘commoning avoids uniformity and homogeneity by offering … an inclusive, common life open to differences’.

Joshua Simon’s research of the MAKI Israeli Communist party’s archive reveals photographs of Arab and Jewish Palestinians demonstrating together for a two-state solution on a 1947 trip to Yugoslavia and Czechoslovakia. ‘Through the archive, we … have access to that parallel history that never happened and is still waiting to be forged.’

The house of Israel

From hope to despondency