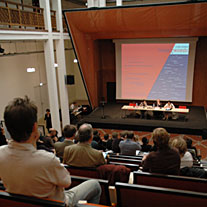 More than 100 editors and intellectuals from all over Europe attended the 21st European Meeting of Cultural Journals in Paris from 26-29 September 2008. This year’s conference, entitled “crosswords X mots croisés [multilingualism and networking]”, was organized by Eurozine together with Sens Public, Multitudes and Esprit, in cooperation with Ent’revues. Held at the impressive Cité nationale de l’histoire de l’immigration, the conference explored multilingualism in Europe in terms of language policies, migration and the European public sphere. Articles based on the presentations will be published in Eurozine in the coming weeks. 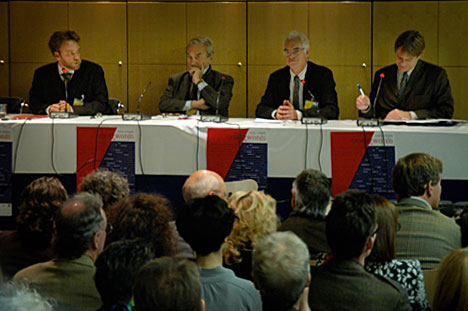 In his opening address, given at the Hôtel de Ville, the poet and philosopher Michel Deguy fascinated the audience with a philosophical and poetological survey of multilingualism. Deguy advocated getting rid of the hierarchy “major and minor languages”; rather, he said, the question was whether “foreign literatures” are translated into local idioms. “Literatures protect languages. A beautiful ‘oeuvre’ is a feat of language” and unites a ‘treasure’ that autochtonous co-authors want to conserve and cultivate further.” 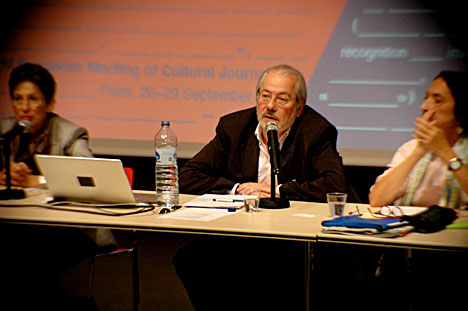 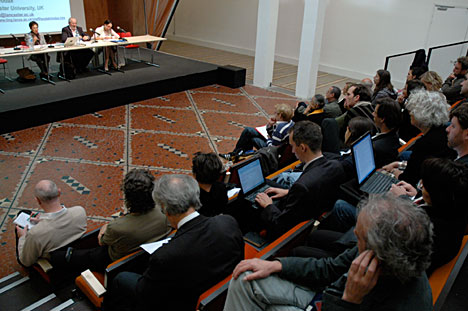 Clarisse Herrenschmidt opened the discussion with the thesis: “The Tower of Babel does not exist!” After the philological revolution of sixteenth century, the story of Babel was interpreted to stand for the “problem” of multilingualism. In fact, argued Herrenschmidt, Babel represents the unity of language. However, as Michel Deguy remarked the previous evening, “globalization doesn’t mean the universal”. English, as the language of globalization, limits conceptual articulation and access to philosophical thought, Herrenschmidt argued. An alternative to this situation, she suggested, was best conceived of as a game in which texts in different languages are exchanged, translated, and retranslated, giving people a reason to communicate with one another. 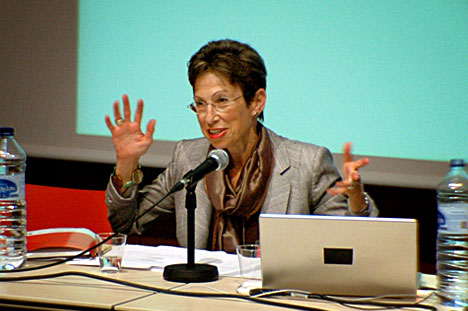 Ruth Wodak began by pointing out that despite the common complaint that multilingualism costs too much, the cost of monolingualism in terms of misunderstanding is rarely considered. English, the “lingua franca” of the European Union, is spoken only by 50 per cent of its inhabitants, while only 13 per cent of people living in EU are English native speakers. The problem is not the Tower of Babel, with its open, unfinished character, but the Fortress Europe. Here, language requirements for residence permits (UK) and in some cases also work permits (Austria) are becoming the norm. Europe’s democratic deficit is nowhere better exemplified than in the EU constitution. Compared to its US counterpart, whose seven articles fit onto one page, the EU constitution assumes a form unsuited to its purpose. Wodak pointed out that the multilingualism discourse as conducted by the EU is characterized by the neo-liberal view of language as a competitive asset rather than a value.

Networks/common(s) – language, media, and the production of knowledge 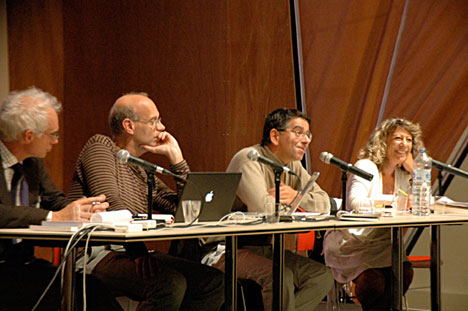 Geert Lovink opened the discussion with a review of multilingualism in the blogosphere. A trend towards “localization” is prevailing in the IT world and the blogosphere is clearly divided along national and linguistic lines. A possible way out of this development would be not to promote global English as a mediator but hybridization, “a creole development of interface cultures that brings together languages on one screen”. 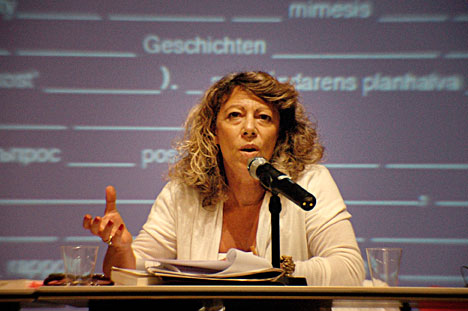 Gérard Wormser stressed how institutional backgrounds and influences are reshaped via exchange and communication. “Vulnerability”, as opposed to institutional “security”, is a sign of originality, while “recognition” and “publication” are inseparable. Can we translate a mind that we cannot admire? Barbara Cassin developed the issue by pointing out examples from her recently published “Dictionary of the untranslatable”, one of which was the Russian word Pravda, a homonym meaning both “justice” and “truth”. The global lingua franca of English (globeish) acts as if untranslatability did not exist, Cassin argued; languages become “flavours” pasted onto a cultural entity. Translation, she went on, leads to a reflection on one’s own language and the “clouds of homonyms” that exist within it. 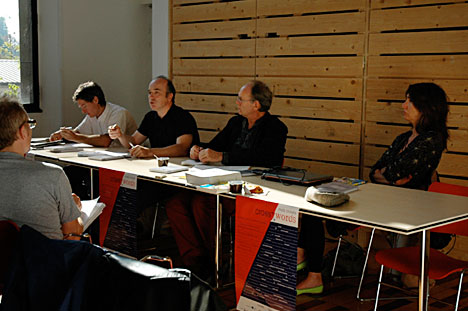 In the first workshop session of the Sunday morning, entitled “The production of knowledge: Digital publishing and open archives” and chaired by Yannick Maignien (Adonis, CNRS), participants heard presentations on new French language digital publishing projects, including CAIRN, revues.org, and Liquid Publications. These projects intend in various ways to use online publication and digital archiving to transform the publication, dissemination, and reception of academic and semi-academic texts. Contributions from openmute.org and Open Democracy widened the discussion into commercial, legal, and public sphere aspects of publishing on the web 2.0. 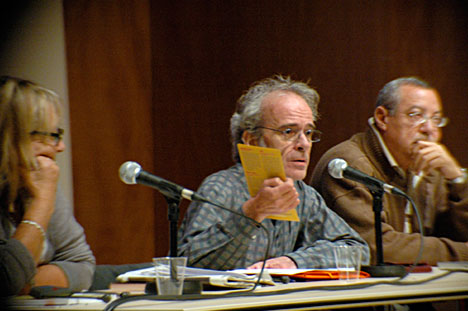 In the parallel workshop on “Politics and publishing: Maghreb < – > Europe”, chaired by Daho Djerbal (NAQD, Algeria) and André Chabin (Ent’revues, France), a discussion took place on possible cooperation between European journals and their counterparts in the Maghreb. Daho Djebal pointed out that Maghreb and other parts of the world have been left out of the “community of European journals” discussed at the conference so far. This, he argued, was another example of the patterns of Eurocentric thinking. Andre Chabin, meanwhile, stressed that we know what has to be done, but we need to find the right “allies” with which to enter into cooperation based on continuity and not short term encounters. 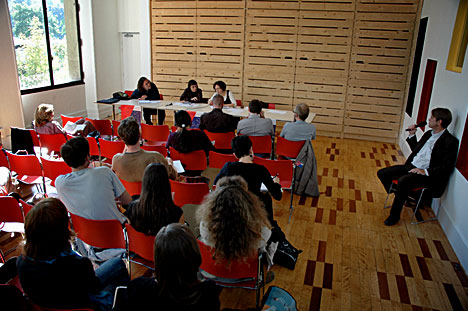 In the first of the second round of workshops, entitled “Translating Europe”and chaired by Ghislaine Glasson Deschaumes (Transeuropéenes, France), the discussion centred on translation as a “civilizing” force and the pitfalls of monolingualism. “In France, the term multilingualism often equals enmity towards the English language”, noted Rada Ivekovic (Transeuropéenes). Stephen Wright (Transeuropéenes) argued that the key issue of translation is an “aesthetics of decision-making” about the degree of strangeness allowed to remain in the translated text – “the co-efficient of otherness”. Translation is the “deconstruction of all orthodoxies”. 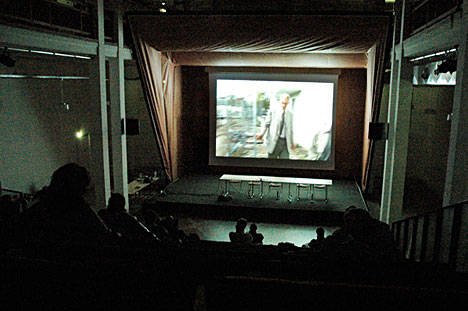 The film “La Cite des Normaliens” (director: Yann Kilborne) was screened in the workshop running parallel. It records the start of term at the new Ecole Normale Supérieure de Fontenay/Saint-Cloud in Lyon. Building work has not yet finished and students, professors, and personnel must deal with the disarray. Discretely and attentively, the camera uncovers the hopes and enthusiasms, the fears and doubts of a community searching for a new system of coordinates.

The closing speech of the conference, which could better be described as an informal discussion, was delivered by Édouard Glissant. The literary critic and theorist, renowned as a foremost proponent of the Négritude school and for his theories on creole cultures, spoke about the difference between the “archipelago” and the “continent”. The former cannot be dominant, the latter can, he argued. Contemporary world society is assuming the structure of the archipelago, in which no one nation can dominate. He went on to compare “mixed” (métis) cities such as Sarajevo and Beirut with “pure” cities, his example being Bordeaux. “Pure” cities, he pointed out, are unaware of their own history of involvement in slavery. 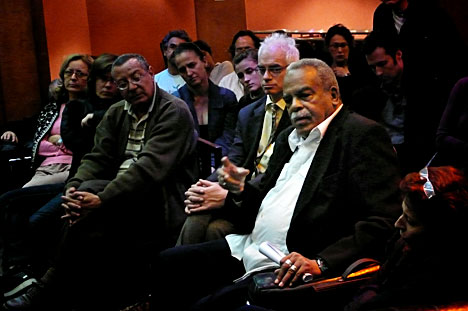 On the subject of multilingualism, Glissant remarked that the term should not indicate a quantitative view of language but to an awareness about “the way I frequent the world”. While translation is indispensable, simply building bridges between the dominant languages is not enough. Journals must be inventive in finding solutions to this problem. “There is a spiritual revolution to defend in the world against the identity of single roots. What actors are more destined to engage in this revolution than journals? They link up, relay, and relate the state of the world.”